How Many Must Die? Teachers Reflect on Gun Violence and Student Protest

Thoughts from the Classroom One Month After Parkland

Today marks one month since 17 people were murdered by a weapon of war in a Parkland, Florida high school. As students across America march out today in remembrance and protest, we asked teachers from across the country their thoughts on life in the classroom.

My name is Charles Ellenbogen, I teach in the Cleveland Public Schools, and a few weeks ago, a former colleague of mine told me he’d bought a bullet proof vest to wear at school.

I told my colleague, who is licensed to carry a gun that the moment I found myself contemplating such a purchase. He didn’t quit. He did transfer.

I was in Cuba when the shootings in Orlando and Dallas and St. Paul happened. And whatever you think of Cuba, of Castro, of communism, the Cubans were expressing sympathy to us, the Americans, about these shootings. We asked whether they’d had any, and they said never. Not one.

There are those, both amateur and professional, both public citizen and politician, who want to say that these are isolated incidents, that there are mental health problems, that a tip was missed, that the only thing that can stop a bad man with a gun is to give a good person—a teacher for example—a gun.

I am not a politician. I am a teacher, and I can no longer stand idly by. There are no bystanders here. We are all political now. And so no, I will not carry a gun or wear a bulletproof best.

This is where I am.

I confess that I don’t know all of the ins and outs of this debate, but I know that, even in these days we’re in, we must pressure those who can change laws—some of whom profit off what has become our daily diet of school shootings—that this is not normal, that we cannot allow this to become normal.

I may not know all about gun laws, but I do know poetry, and I know I want to live in the world that the poet Danez Smith describes. I want to live in his version of a paradise. And his definition is appropriate for this setting:

“Paradise is a world where everything is a sanctuary and nothing is a gun.”

I am repeatedly struck that one of our country’s most classic cases of civil disobedience lasted 384 days. Do we have that attention span these days? Can we keep up the pressure for that long? And to those who can change laws, I add this to the pressure that’s coming at you in terms of votes, in terms of marches, in terms of phone calls, in terms of letters, in terms of protests—you should remember—I’m the one teaching your children.

I started teaching in 2001 at a charter school for Baltimore City’s expelled students. This job not only initiated me into the role of educator, but within three weeks, I became their comforter, therapist, and protector as well. My students said little, but drew pictures of planes exploding into blocky skyscrapers and, already experts in the violence that permeated their neighborhoods, these boys burst with newly seeded anger and fear. Just 22 years old myself, I had little to offer in the way of reassurance, but repeated like a mantra: “You’re safe here, you’re safe here, you’re safe.”

After the attacks, the FAA was swift to implement stricter regulations to prevent future catastrophes. Yet today, even more than in 2001, my students—now middle schoolers at a K-8 private school—live with an awareness that they are not safe.

In my 17 years as a classroom teacher, there have been over 200 shootings on school grounds, two of which have occurred since the mass murder in Parkland last month. Guns are being brought into schools and used against students and teachers with a desensitizing regularity, but while 9/11 prompted immediate action to de-weaponize our skies, we have yet to see similar efforts to de-weaponize our schools.

As a teacher and a parent, I am overwhelmed by a sense of responsibility to protect my students and my child, but on the brink of 40 I find myself less and less able to offer reassurance. There are no words to explain how any of this possible, how the NRA and the politicians in its pocket have, through their gross inaction and willful misreading of the Second Amendment, time and again deemed our children expendable.

In the car this morning, my 11-year-old son said:  “I know we can’t un-invent things, but it seems like life would be better if there were no guns at all.” I said nothing, but thought of Columbine, Virginia Tech, Newtown, Parkland. Un-inventing guns might not guarantee better, but for all those victims, it would guarantee life.

When we do active shooter “lockdown” drills at my high school, the lights go out, the blinds are drawn, I bolt the door, and everyone settles in the corner of the room out of the sight line of the doorway. It takes under ten seconds. Then we sit quietly in the dark, sharing a moment where we can all contemplate getting shot. It strikes me as a very American form of meditation. As if having a young man stalking the hallways and strafing the school is as natural an occurrence as the fires and tornadoes for which we also conduct drills. As if the phenomenon is akin to a natural disaster, as opposed to a national disgrace. When the all-clear recording crackles across the intercom, we generally return to what we were doing with nary a moment of reflection, all of us a bit more complicit in the normalization of a level of gun violence that would be seen as a complete aberration in any other nation in the world. No wonder the kids want to walk out—better to shout in the streets than sit in the dark.

I have a mounted head of an eight-point buck I shot when I was 16 tucked in the back corner of my classroom where I teach English at a boys’ high school in Tennessee. If the taxidermied deer head and rack were not enough to convey whatever they might—dominion, control, masculinity—the deer’s front two hooves adorn the same wooden plaque below the head, and they are upturned at each ankle, presumably to hold a rifle. The photo taken afterward is the last one taken of my grandfather before he died. The deer found its resting place in my classroom after my parents cleaned their house of the possessions from their sons’ youths, followed by my wife uttering “no way” to a dead animal in our first home together.

I did not think much about the deer head in the back of the classroom at first—my mind was too preoccupied on teaching sentence diagrams to boys who knew them better than I did and trying to explain the healthy masculinity of Macduff after Malcom tells him to use his rage to kill Macbeth “like a man” after the title character kills Macduff’s wife and children: “I shall do so; / But I must also feel [their deaths] as a man.” But once I became more secure in my teaching, I found that I thought about the deer head almost every day as it loomed over boys’ struggling to emerge as young men.

I regretted pulling the trigger immediately after the deer hit the ground; I regretted it again when I shot it point-blank to remove its suffering. Though I tell this story each year, I know my words are not nearly as powerful and staying as the deer head itself. “When I was learning from them,” Wendell Berry writes about his teachers in his essay collection The Art of Loading Brush, “they were attempting something besides teaching…. They taught me best by example, unaware that they were teaching or that I was learning.” I have told my students that I will not have a gun in my home. I have told them I will not hunt again, but what am I teaching them, and what are they learning?

Now my heart stops when the PA system clicks.

Not during the morning announcements, or the lunchtime calls for students to the guidance office—those are expected—but at unusual parts of the day. When the speaker booms halfway through a class period—that pauses my breath.

I’m not surprised by much. I’ve been a schoolteacher for 14 years. High school is a wild, fascinating, curious, uncanny time in the lives of kids. I root for them, I pray for them, I try to challenge them.

I do this because I love them, because I want to believe that whoever teaches my daughters will love and care for them—because all kids deserve to be treated like they matter.

Being a high school teacher means living somewhere between the sentimental and the practical. Especially as a teacher of seniors—they are about to careen into a world of possibility. I want them to be confident, and to be careful. I want them to understand that failure is not the end. There are many things that I want for them.

I just don’t want them to be afraid.

Battling American Obfuscation as a Young Black Reporter in Vietnam 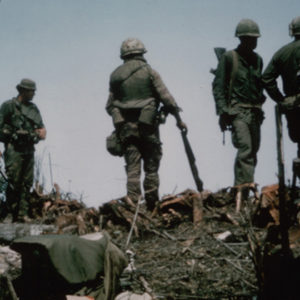 Battling American Obfuscation as a Young Black Reporter in Vietnam I saw the tiredness and anguish in the eyes of our “grunts” on the ground and some asked me why they were there. I saw the plight...
© LitHub
Back to top
Loading Comments...