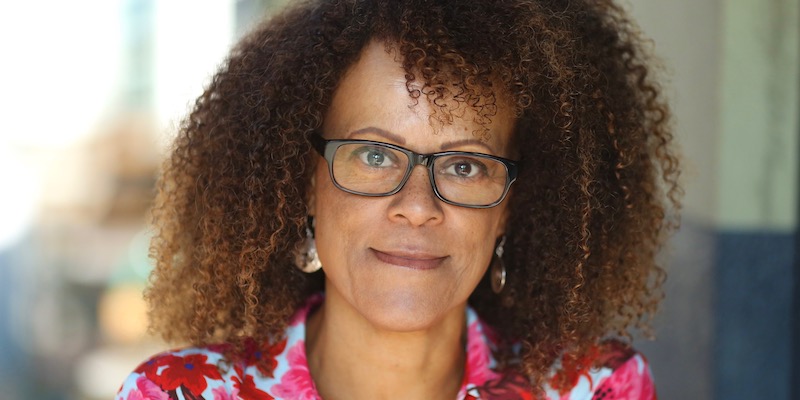 Bernardine Evaristo on the Richness of Older Women’s Stories

“As ageing is inevitable, I had to start to embrace it.”

The following is excerpted from Bernardine Evaristo’s Manifesto: On Never Giving Up and appeared in Lit Hub’s Craft of Writing newsletter—sign up here.

In 2013 I was commissioned to write a short story for BBC Radio 3 inspired by Under Milk Wood in the centenary year of Dylan Thomas’s birth—a perfect project for me. Instead of a short story, however, I produced a narrative poem about four very different black women in London, one of whom was a transwoman. I called it LondonChoralCelestialJazz and recorded it live at a festival in Wales.

As soon as I started writing the piece, I knew that I would expand it into a novel. Just as Thomas had honoured the inhabitants of a small Welsh fishing village in Wales, I decided that I would do so with black British women, who have been barely visible in fiction.

Only one of the characters in the radio piece, Carole, survived the short story, and went on to become one of the stars of Girl, Woman, Other, which I began writing that year. The novel maps the lives of twelve black women and womxn (one character is non-binary) and encompasses multiplicities around age, era, culture, class, sexuality, gender, race, occupations, ambitions, politics, migration, family set-ups, relationships, British geographies and original countries of origin—across more than one hundred and twenty years.

The characters’ lives and stories are interlinked through a literary form I’ve coined “fusion fiction”—which employs a pro-poetic patterning on the page and non-orthodox punctuation, while fusing the women’s stories together. Each woman has a dedicated chapter, and they interrelate through x-degrees of separation. There are four main mother–daughter relationships, as well as other family set-ups, friendships and relationships between lovers and colleagues.

It goes without saying that as we grow into our old age, we have to look after ourselves even more, but it’s never too late to start doing that.

I loved writing in this form because it allowed me to flow freely—from interiority to exteriority, from the past to the present, from one character’s narrative to the next. While the words flowed on the page, it wasn’t the same as free writing or undisciplined writing. I was very alert to all the components of fiction that need to be moving into place at every stage to make the story work. The novel also had to be accessible to the general reader because I don’t want my work to appeal only to those with a doctorate in experimental fiction. I have found that once people get past the first few pages of how I present my stories on the page—verse fi ction or fusion fiction—they find them easily readable.

I also discovered that the decision to remove aspects of traditional punctuation can have the effect of changing the reading experience, as people have informed me, making it more quickly immersive. A dyslexic reader told me that she found herself whizzing through the novel because the absence of orthodox punctuation meant she wasn’t tripped up by it as she went along.

I could not have written this novel when I was a young woman because I was only interested in creating young characters. I’m always amused when my young students create frail, old characters hunched over walking sticks, only for them to tell me that they’re in their forties. I would have been the same.

It’s only now that I’ve lived a lot, listened a lot, experienced a lot and witnessed a lot—especially in my relationships and interactions with black women—that this book became achievable. I completed it when I was sixty years of age—with a substantial past behind me and facing a future of fewer years than I’ve already lived.

In Girl, Woman, Other, the older women live full and rich lives at all ages. I was determined that the older women should be compos mentis and not suffer from dementia, which has become something of a cliché in contemporary culture. I’d long noticed that older women writers also tend to write young protagonists, as if older women are no longer interesting as fictional subjects, when we have actually accumulated more wisdom, experience and stories. We live in a gerontophobic society which isn’t challenged enough, and too many young women dread ageing at every stage of their lives.

When I hit forty, a friend gave me a kitsch porcelain card with the number forty written on it—as if I would want to put it on my mantle-piece as a permanent reminder of my great age. When I passed forty-five, I realized I was counting down to fifty and felt dreadful. During my fifties, I began to change my negative mindset. I reasoned that, as ageing is inevitable, I had to start to embrace it.

The characters in Girl, Woman, Other span the ages of nineteen to ninety-three, and within this context, in interviews, I have found myself talking quite a lot about my own age. In doing this, I managed to rid myself of the taboo around ageing; I feel that I’ve talked it out of my system. I welcome the fact that people know my age and I’m certainly not ashamed of it. I hope to be a role model for younger women who fear for their future as soon as they hit twenty-five, and for older women whose marginality is enforced at every level of society. It goes without saying that as we grow into our old age, we have to look after ourselves even more, but it’s never too late to start doing that.

At heart, Girl, Woman, Other is a polyphonic paean to black British womanhood and to non-binary people, in all our flawed complexity. If I had to choose just one of my books to give to my younger self to read, it would be this one. I think she’d get a lot from it. 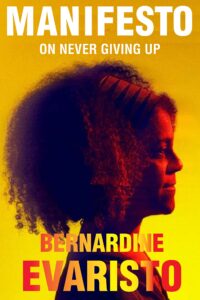 Excerpted from Manifesto: On Never Giving Up © 2022 Bernardine Evaristo. Reprinted with permission of the publisher, Grove Press, an imprint of Grove Atlantic, Inc. All rights reserved.

Bernardine Evaristo is the 2019 winner of the Booker Prize for Girl, Woman, Other, which was a national bestseller and a winner and finalist for many awards including the Women's Prize for Fiction and the Dublin Literary Award. Evaristo is the author of seven other books that explore aspects of the African diaspora. Her writing spans verse fiction, short fiction, poetry, essays, literary criticism, and drama. Evaristo is President of the Royal Society of Literature, Professor of Creative Writing at Brunel University London, and an Honorary Fellow of St Anne's College, Oxford. She received an OBE in 2020, and lives in London with her husband. Her most recent book is Manifesto: On Never Giving Up.@BernardineEvariwww.bevaristo.com 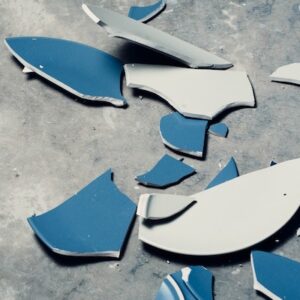