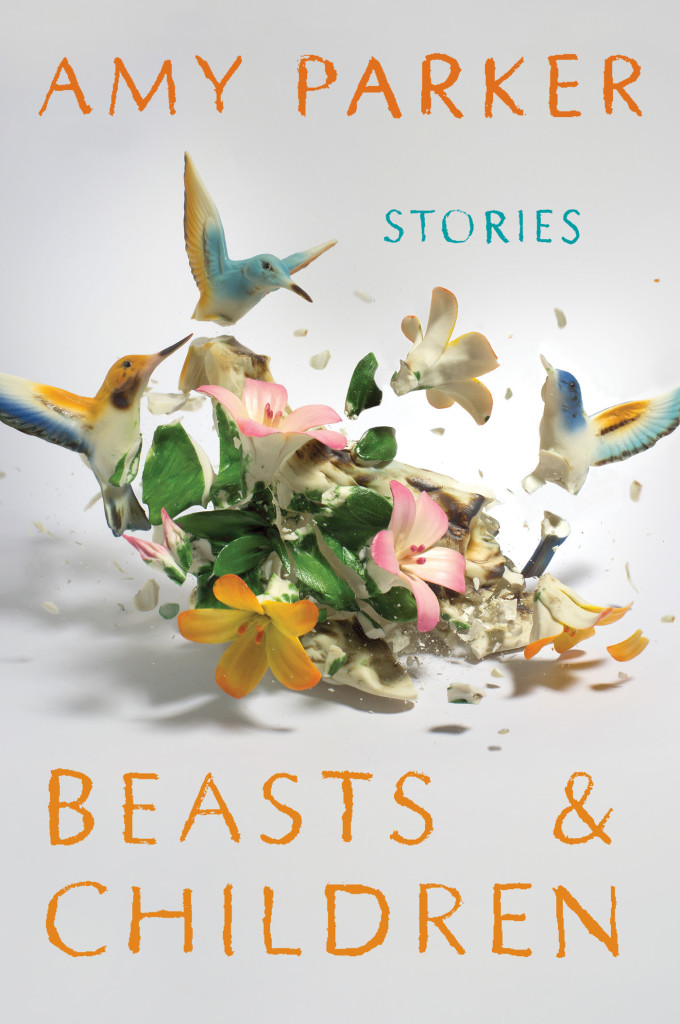 The following is from Amy Parker's story collection, Beasts and Children. Parker was born in Okinawa, Japan, and spent most of her childhood on diplomatic and military compounds overseas. She won a Michener fellowship in fiction from the University of Texas, Austin. Afterward, she spent four years doing intensive monastic practice and received lay ordination in the Soto Zen lineage in 2007. She left the monastery for the Iowa Writers Workshop, from which she graduated in 2012.

In the lull before morning recess, Danny looked up to see his mother’s head framed in the window of his fourth grade classroom door. She grimaced, peered in, pressed the mesh with her vivid painted mouth. Danny sat in the back row, but even from his distance, he could see that her cheeks were flushed. She caught Danny’s eye, pointed frantically down at something out of sight, and waved. Her knotted red kerchief sat askew on her hair. Generally she tied her head up jauntily, with the bandana knot centered over the part in her hair, the knot-ends pert and symmetrical as cat ears, her Rosie the Riveter look, she called it. The bandana’s knot, clumsy and loose, had slipped sideways and was in the process of undoing itself over her left ear.

His mother popped the clasp on her pocketbook and fished out a box of Benson and Hedges. She shook one out and held it, unlit, between her long fingers. Her bangles clattered. She considered Mrs. Michaels, with a grin and a squint.

She threw her pocketbook on his desk. Lipsticks clacked, loose change jangled. A squiff of tissues poked out from the hinge. Gingerly, Danny fished for a pack of matches. If he took long enough maybe she would give up.

Digging through his mother’s purse usually excited him. The smooth metal curve of lipsticks, the scent of perfume, the slippery silk lining with the tear where bobby pins or pennies fetched up, the ring of keys, the little hairbrush and compact, the crisp money she flung, loose, into the bottom of the bag, sprinkled sometimes with face powder. She liked him to go through her purse for her in the evenings before she went out, and he felt furtive and grown up. But here in the classroom, the open purse seemed to him as naked and shameful as a drawerfull of her panties. He bent his head over it, pretending to search.

“Is it possible you just returned from a festive lunch? Perhaps you need some time to think over this decision. There is coffee in the teacher’s lounge. Our school nurse could show you in.”

“Give me that. I have to do everything myself.” His mother grabbed her purse and dropped the cigarette. It rolled on the floor between Danny’s feet. He brought down his shoe on the cigarette, and looked over at his teacher. Mrs. Michaels did not allow candy or chewing gum. Certainly not a cigarette. Why did his mother get to break all the rules?

Because she was a witch.

He ground the cigarette under his shoe.

His mother smacked him.

A girl in the back began to cry.

Shock and anger darted across his teacher’s face. She strode over to Danny’s mother. Danny, still at his desk, cowered between them. Orla weighted his feet. He couldn’t move for shame.

“Mrs. Marsh,” said Mrs. Michaels in a low tone, “The principal and I have asked you, on numerous occasions, not to interrupt my class.”

His mother stood for a moment, cocky and squinting.

“You can’t keep me from my child.”

“And you can’t keep taking him out of school. Mrs. Marsh, unless you want to be escorted from here by the police, I suggest you leave.”

Danny’s mother blinked. She looked down at Orla, who rolled sanpaku eyes and listed against Danny’s ankle. She looked at Mitzi Tomkins, crying, and at Ben Henshaw who had his hands over his ears, at Carly Swift who was gulping down laughter, and at Mrs. Michaels, who stood beside Danny’s desk with a hand planted firmly on Danny’s shoulder.

Danny’s mother put her palm over her mouth in dismay.

“My baby,” she said, “I’m so sorry.” She kissed Danny’s cheek. Her mouth felt sloppy, and also greasy, as though she’d been eating butter.

“Mrs. Michaels,” said Danny’s mother, suddenly crisp, “there has been a family emergency. I cannot spare you or this piddly little school another second of my time, so we will be going. Say goodbye, Danny.”

Danny threw Mrs. Michaels a pleading look. She returned it, and for one moment he thought she might take him in her arms.

“Goodbye,” said his teacher. Her face was very red and perplexed.

The door slammed. Danny stood waited outside it for a moment, hoping to hear what, if anything, Mrs. Michaels would say. But the classroom was silent.

“God Almighty, Danny,” said his mother, “I never knew you were such an apple-polisher!”

She handed him Orla’s leash, lit a cigarette and strode down the hall, her skirt swinging jauntily. Her smoke cut through the school smell of bleach and floor polish.

“Come on, baby,” she said in the laughing voice he loved.

She flicked a dead match into the path of the janitor, and did a Gene Kelly move, scuffing her shoes through the janitor’s cleaning foam. All at once the sound of his mother’s high heels on the linoleum filled him with excitement, like the clatter of a train, and he ran to catch up with her. Orla’s nails chittered and her stomach swung as she struggled to keep up. He looked down at her fondly.

The school corridor felt like an unfamiliar, enchanted tunnel. The light turned the hallway sepia, and Danny remembered the moment in the Wizard of Oz, the best moment, when Dorothy crept through the shadowy umbers of her fallen house, opened the door, and to a swell of music emerged into Technicolor.

His mother reached up, straightened her red scarf, and turned the corner. Danny ran to catch up with her, Orla at his heels. They burst out the doors all three of them together, running to the curb where her red Mustang waited, blazing in a world of light and color.

Danny had just about fallen asleep in the back when his mother said in a sharp voice: “Get up here baby, and take the wheel. I’m driving blind.”

Danny scooted forward over his spill of school papers and elbowed Orla to one side. He rubbed his eyes. They were still speeding through the hill country. Heat pools shimmered. The sun was hot and the light jab-jab-jabbed against the punching bag clouds.

Her voice, normally lazy Texas with an uppercrust lilt, angled sharply. Danny glanced around the car’s interior, looking for bottles. Had she stopped while he was asleep? He knew her flask was empty; he’d seen her finish it in the school parking lot. And there weren’t any bottles, as far as he could see.

She was going 90. The road seared at that speed. She let go of the wheel and clutched her head. The speedometer crept to 100. Danny, terrified, leaned across the gap between the bucket seats and steered. They started to weave.

She kept her hands pressed hard against her eyes, her foot flooring the accelerator like she was trying to speed herself back into sight. Danny held the wheel in both hands, struggling to keep the car straight. The road began to curve.

He let go of the wheel with one hand and struck her as hard as he could on the knee. Her foot didn’t budge. The car veered into the opposite lane.   He yanked them back. Up ahead in their lane he could see a blue Chevy, travelling much more slowly.   The Mustang gained speed.

“Mama, take your foot off the gas!”

He leaned over and grabbed her by the shin, pulling her foot. She just pressed the gas harder.

They were right on top of the Chevy. Danny hit the horn. The Chevy swerved. Danny swerved. They clipped its side mirror and kept going. Behind them, a horn blared, and he heard a man shouting. Danny was screaming. His mother was screaming. The wheel fought his grip. The car kept skidding. Danny focused on the dotted lines in the road, casting worried glances at his mother, who sank in a half crouch, holding her eyes, and at Orla, who pressed herself forward to get close to them, terrified, one paw scraping his wrist, the other slipping on the gearshift. The road rushed under them, a grainy blur of asphalt and heat, and the terrible whipping in his ears distracted him, and he felt battered by wind and speed. Please God just don’t let them crash.

Orla leapt onto his mother’s lap and then burrowed down into the footwell, between her feet. Her mother kicked the dog, screaming, and Orla scrambled back up, this time onto Danny, but his mother’s foot came off the accelerator, and the car slowed down.

“Don’t touch the pedals, mama,” said Danny. “I’m going to steer us off to the side.”

They rolled onto the shoulder, and when the car was nearly stopped, Danny pulled the hand brake.

“Jesus,” said his mother, “Jesus Christ.” Then she leaned her head on the steering wheel and he pressed his face into Orla’s neck and they both cried.

She pulled the red bandana from her hair and waved it vaguely in his direction. She pushed the lighter in the dash.

“Pass me a cigarette, too,” she said.

She tilted her head back, chin raised to the sky. Danny knelt beside her and bound the kerchief tight. She raised her face, wearing the blindfold, lips wrapped in a scowl around the unlit cigarette.

“I must look like I’m about to be shot,” she said.

From BEASTS AND CHILDREN. Used with permission of Mariner Books. Copyright © 2016 by Amy Parker.

Remembering the Storyteller of Damascus, Before the War 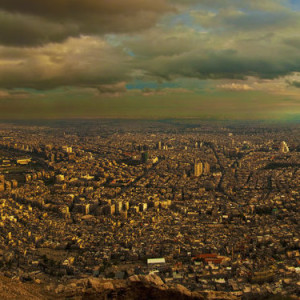 Remembering the Storyteller of Damascus, Before the War I don’t write true stories. I find them suspicious—the claim that any one place or person can be squared away neatly...
© LitHub
Back to top