Be Here to Love Me at the End of the World 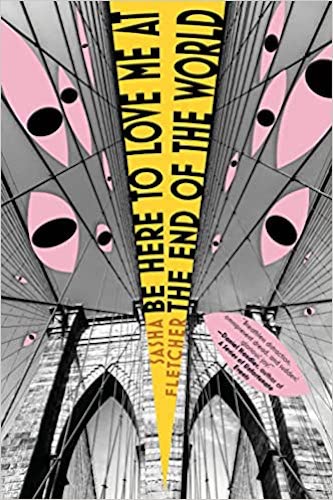 The following is excerpted from Sasha Fletcher's debut novel, Be Here to Love Me at the End of the World. Fletcher is the author of it is going to be a good year, several chapbooks of poetry, and a novella. His work can be found both online and in print.

Sam walked in the door. He was full up with magnificent intentions. Eleanor was out. Sam sat down. Ten minutes later he took out his phone. He checked his bank account. He rent his garments. WOE AND CALAMITY ABOUND IN THE FINANCIAL SECTOR, announced the news. “Tell me about it,” said Sam. POOR SPENDING HABITS AND A LACK OF CONSISTENT INCOME CONTRIBUTE TO FISCAL INSECURITY AND A GENERAL SENSE OF INADEQUACY. Sam stared out the window. NATIONWIDE, THERE IS A PALPABLE SENSE OF DISAPPOINTMENT. There was a brief commercial break where the President asked everyone to text a number to send him five dollars to fight the war being raged against him at all times of the day and also the night, even now, at this very moment, in the fallow fields of our youth, and then there was a commercial for burgers, for the way they taste, the cheese holding you and the burger like a blanket, and you can smell the burger, you can taste it in the air, it’s heavy with promise, the clouds are low and wisping, and winter is nowhere to be found. the disappointment is almost violent. The news came back, and then paused, just enough for Sam to think he’d caught his breath. CAN YOU FEEL IT? And Sam could, and Sam did, and then the news said, TODAY THE POLICE CONSIDERED DETAINING YOU FOR YOUR INABILITY TO CONTRIBUTE TO SOCIETY BUT COULD NOT QUITE DECIDE HOW TO WRITE IT UP IN THE BOOKS, AND SO YOU WERE LET GO. WERE YOU, goes the news, EVEN AWARE OF HOW CLOSE YOU CAME TO HAVING A BLACK BAG THROWN OVER YOUR HEAD BEFORE BEING TOSSED IN A VAN WHERE NOBODY WOULD EVER KNOW YOUR NAME AGAIN?

Sam took the news out back and set it on fire. He watched it burn. Sam felt that enough was enough as regards today. Sam knew that civil disobedience could only take you so far. This is what Sam told himself on a regular basis.

Yes, Sam, this is true, but one of these days it’ll be summer. One day the angels will come, one day the plants will be watered, one day we’ll all have enough money and the mighty will be thrown from their thrones and the hungry will be filled with good things and the rich will be sent away empty. One day this will all be different. One day the sun will start staying out longer and longer until one day the sun started staying out for longer and longer. Bit by bit, the mountains of long-accumulated snow were melted into rivers that would, one day, drown us all, given half the chance. Birds started singing. Small children emerged from their hibernation, alive and, I guess, well. The light coming off the buildings felt somehow alive, you could almost hear Prospect Park waking up over the subways and buses and sirens. Thirty-two babies were born the second the snow finally melted for good and then, suddenly, all our hands were clean. There was no official tally for how many people or buildings or buses or cars or plants or books or dinners or food carts or pets or trees or dreams that the secret police had blackbagged, but, on the websites devoted to cataloging reports from the internet, it was estimated to be anywhere between four hundred and two thousand that winter. Then the secret police came for winter. In the end, they’ll come for you, too.

In the morning, Eleanor came and wrapped her arms around Sam where he sat with his coffee. She said, “I had the strangest dream last night.”

She shook her head, which was full of disbelief. In his heart Sam knew a great storm was brewing. He could feel thunder rolling in hard under a cloud built like a minivan. Doom knows your name and has a firm grasp of the particulars. Sam felt electric, he felt ecstatic, he felt primarily alive, it was great, you should try it. He closed his eyes and breathed real deep.

It’s summer camp. The air’s close and everything’s wet. Last night there were hot dogs and the moon got so low it was the only thing in the sky. Eleanor wakes up in her bunk and the moon is still sitting like that. She walks outside. She can hear everyone but can’t see anyone. She wanders around the camp. She jumps in the lake and it’s cold and incredible. She takes an outdoor shower to wash the lake water away with more lake water. Eleanor is ignoring the moon and the moon is not indifferent about it. Eleanor is looking for Sam. She is aware at this point that it’s a dream. The moon is never that big, and the sky is never the same in the day as it is at night. Nothing about this is right but it also isn’t terrible. Eleanor is looking for Sam. Sam is not in the cabins and he’s not in the lake and he’s not in a canoe and he’s not in the trees or the woods or in the offices or on the single bus parked in the dirt lot and Sam isn’t in the dirt, so Eleanor climbs up the tallest tree she can find, the one straight to the moon, to see if Sam is there, because she just remembered something she has to tell him, and she can’t wait to tell him, it’ll make his whole entire day.

Oh my god, look, out the window! It’s summer! As was foretold in the ancient texts! Summer!

In summer, the streets of Brooklyn are lined with mountains of trash just boiling alive in the sun, which is eternal, and unrelenting, from six in the morning to eight thirty at night. Forty-five babies have just come into the world, screaming. Like right now, as I’m telling you this. Imagine that! From Sam and Eleanor’s apartment building’s roof, which you cannot get to, you can see the arch across the street from Prospect Park. One winter, the Eagles won the Super Bowl. But now it’s summer. Since 1901, stone eagles have sat on pylons atop the park’s entrance, where they eye you, warily. Meanwhile Johnny moved to Berlin and took up boxing, which is why we haven’t heard from him in a bit and may never hear from him again, but he is, mostly, very happy. He lives in a bunker. He loves the way the sky looks during a storm there. He could not begin to describe it. It is sometimes just so nice to find creation more than you can bear. Today Sam’s second favorite tennis player has advanced to the finals of an obscure and hitherto unknown tournament while Sam’s second favorite tennis player’s own personal mother, a former Malaysian princess who renounced her title and claim to the throne to pursue a computer science degree and marry a Greek house painter, burns an effigy of the Cuyahoga River. The eagles are restless. The boathouse in the park is beautiful this time of year. I really wish you could see it. When Eleanor walked in the door, Sam announced, “The boathouse was so beautiful today. I really wish you could have seen it.” Immediately Eleanor’s phone rang. Earlier today (it’s the weekend), Sam cooked some chicken in white wine vinegar and black pepper, and he cut up and sautéed green beans in some browned butter, and mixed that all up with some pasta and pesto, and stuck it in the fridge. He takes it out to get it to room temperature, and then adds some little bits of mozzarella, the perlini ones, and gets out a white wine and all the ice in the world. Eleanor comes out of the bathroom, where she went to take the call. She looks like she has seen a ghost, in that she looks startled by mortality in a way that feels a little inevitable, but also incredibly thrilling. Later, Eleanor will tell him that the tests are fine. It wasn’t a bad abnormality. It was just an abnormal abnormality. Nothing’s changed. The world keeps turning. In thirty years the coasts’ll be impossible. After that they retired to the country. Sam died younger than anyone really expected, due mostly to his wild heart. Off in the distance was a hawk in flight.


Be Here to Love Me at the End of the WorldDaily FictionexcerptsFictionMelville HouseSasha Fletcher
Share: 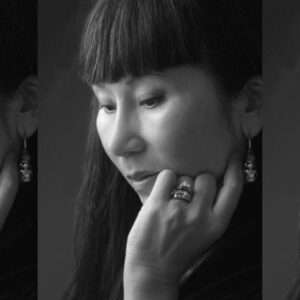