Bad Faith Backlash: Arguing Online With Everyone and No One

On "Cat Person," The Last Jedi, and the Internet of Takes

Everyone loved it, except for those who hated it, and no one more than everyone else. Reviews for The Last Jedi had been overwhelmingly positive, but once I looked up showtimes, a quick scroll returned ominous results: “killed my childhood”; what happened to Admiral Ackbar?; Vox’s “backlash explained.” Explained maybe, but readily apparent it was not. And there was a sense of déjà vu. Not a week before, while waiting in line at Shake Shack, I injected Twitter and let the wave of nausea pass; much the same had taken place with “Cat Person” by Kristen Roupenian, a New Yorker fiction met with universal praise and wariness of a torrent of criticism—the latter being rather hard to find. These were unusual circumstances—a “viral” short story; a movie with a disappointing 1.1 billion in box office—but a pattern has emerged: inevitably some of our raging debates will be driven by people who, quite possibly, don’t exist.

This is an era defined by sabotage. The stakes are a nerdy, postmodern mix of high and low—nativist sentiment and an expanded universe hissy-fit; a creeping authoritarianism and tweets in glitchy Cyrillic conversion belying a deep discomfort with female protagonists. The bot—an algorithm for impersonating human behavior—throws a wrench in the works of genuine politics and criticism. The memes “gotta hear both sides,” and “well, actually . . . ” imply nothing less than the futility of disagreement in principle. And it’s hardly unwarranted: Good-faith argument on social media is probably impractical, and definitely unclickable.

At a certain point, rebuttals to a mostly faceless horde’s resentment was all I heard about “Cat Person” or The Last Jedi, and particular qualities of both seemed lost: Roupenian’s crafty implication of every reader who has a male body or has had to deal with one up close; The Last Jedi’s delivery of legitimate—or illegitimate—narrative surprise after a goodly number of takes on “fan culture” had pronounced the practice all but dead. Instead, there’s a kind of hair-trigger solidarity with the latest object of performative scorn, and voiced all around is a brave, popular opinion.

History repeats itself: Once a horde launches its campaign, the opposite take must be taken. An opinion about the culture—say, two thumbs up for Wonder Woman—is assigned a politics “we need now.” This is understandable given how quickly detractors do the same. User-reviewers have placed blame on “SJWs” for the betrayal of the Star Wars franchise; they’re up in pious arms over the dismantling of the Skywalker legacy—a rather telling go-to grievance. (“Where does it end?”) The sense of disappointment in many of the reviews suggests an almost bicameral-mind-like expectation that one’s own hopes for what the movie would be should have been respected. Adopting Trumpian rhetoric, they claim that someone—bribed critics, an “agenda”—has ruined their fun. And here the trenches are dug: Even if the Last Jedi’s monorail theory of space travel was head-scratching (“Boring conversation anyway”—Han Solo), who would want to side with users such as these?

“‘Online’ is what happens when opinions of all kinds become shorthand for both virtue and moral failure.”

But a defense built up against this vitriolic tide makes for rather extreme ironies—where being less than enthusiastic about a Disney franchise property and branding mission with a total budget worth 1,600 unproduced independent films becomes problematic. To be fair, the irony has little to do with good-humored corporate art itself and everything to do with audience reviews helpfully pointing out the race of each character. But the conflation of criticism and “backlash” is bad news to say the least. “Online” is what happens when opinions of all kinds become shorthand for both virtue and moral failure.

The consequences go beyond having to correct tweets referring to “Cat Person” as an “article.” In the New Republic, Jo Livingstone wrote about the MFA-workshop-in-subtweets: “So when a literary phenomenon happens on social media, readers get the story-about-the-story, a commentary on how the conversation played out before it’s even finished.” And a week after “Cat Person,” like clockwork, the story about The Last Jedi was of the unseemly critico-popular gap on the notoriously reliable website Rotten Tomatoes. Attempts were made to unravel a sure conspiracy. (Many Bothans died to reduce the audience score to 49 percent.) Though, I would add that the notion of a “finished” conversation is where most all the danger lies. We open Twitter, the hellfire burns our dry winter skin like paper, and see that a short story and a trilogy’s middle installment have triggered a reactionary sensibility; we stand up for them with a quickly manufactured consensus.

But when trolls—figurative inhumans—set the terms of debate, our own convictions suffer for it. This goes especially for debates that have played out post-election, online, to exhaustion. Identity politics has become something to have and to own, rather than a discourse in flux. A world that finally rids itself of every useless normativity—white, hetero, all of the above—seems ever more unlikely when we commission wax-museum statues of op-ed villains. We end up hearing less from people of color who feel over-essentialized, and much more about stray Bernie Sanders quotes or something called “Mark Lilla.” Also, however crucial it is to set aside arguments about cultural appropriation made by white people wearing sombreros, it should be asked: what is “culture”? Isn’t it something we create and share, and, most importantly, not something we embody according to whichever intersection of big-ticket identity markers we’ve arrived at? Janet Malcolm wrote that jargon—in her case, the term “psychopath”—is an “admission of failure … merely a restatement of the mystery.” Such as it is with the most contentious academic language in use today, which too often conflates race, culture, and identity in a way that ultimately serves power—with minorities able to claim only that which already “belongs” to them.

This is not to say that the Sons of Skywalker are right about anything at all whatsoever. They’re wrong on Texas college admissions and they thought Margot was the villain of her own “personal essay”; they’re selective about the facts and philosophically inhumane about immigration and that’s why they thought the Canto Bight storyline was unnecessary; they only contract with male Ghostbusters and they voted for Trump. Often their attacks are held up for ridicule on social media; sometimes they’re sniffed out by the Washington Post. But Gamergate, “Not All Men,” NOT MY STAR WARS,” (Gregg N.) and “identity politics cost Clinton the election” are cases of thinly disguised contempt that have been in a way assimilated by the left’s riven interest groups, resulting in a bitter fallout where we dig into election data and make specious connections between race/gender/class and commitments to anti-racism, socialized medicine, and democratic values. Trolls can rely on the most elemental hack: denial of service. They can afford to be wrong, and we cannot.

Is there anything to be done? Facebook has been hiring moderators and once they even confessed to having a single eminently remediable fault. Twitter messed with verification. The increase to 280 was observed with a Day of Jokes (the transaction of politics on a decontextualized social media platform with an arbitrary character limit being a problem long dismissed for being far too tedious to mention). Not only do accurate, thoughtful things often take a long time to say, but there’s an ever-present catch: en vogue political concepts are quickly refashioned as weapons against people who believe in their underlying principles. “Political correctness” is the most effective piece of right-wing propaganda of modern times—a blockbuster recruiting meme, and a means of destroying opponents at a gradual, plausibly deniable pace.

Though articles for Polygon and Quartz suggest a preponderance of Last Jedi screeds were made with recently registered accounts which had only posted the one half-star review, Rotten Tomatoes claims its user score is legitimate. It appears that these reviewers probably, stubbornly, actually exist. The same could be said for the “might as well call it SJW Wars” crowd—white eggs and wounded masculinities—and the 62,984,825 real, certified Trump voters. As Rotten Tomatoes spokesperson Dana Benson—surely speaking for every tech company recently pressed on their role in hypercharging mendacity—said to Forbes, “On the positive side, our site is popular.”

“Not only do accurate, thoughtful things often take a long time to say, but en vogue political concepts are quickly refashioned as weapons against people who believe in their underlying principles.”

There’s a certain way a movie stays with you when you walk out of the theater and onto the street and belong to yourself again; there’s a way that fiction and only fiction teases apart what is lifelike and what is true. But as I followed the conversations around “Cat Person” and The Last Jedi, a much simpler—and less fair—inclination surfaced: To like, ultimately, what the other side so unreasonably hates seems like the right thing to do. Roupenian sold her book. She’ll have a tough act to follow, and without the clever, mortifying accompanying photograph by Elinor Carucci. But the story’s insight into a “revulsion turned to self-disgust and a humiliation that was a kind of perverse cousin to arousal” feels canonical already.

However, my last, best hope for pop culture lies with how The Last Jedi paid off Rey’s lineage. It was a mystery that had featured prominently in listicles since The Force Awakens. Some have taken the revelation that this force-sensitive Jedi-in-training had no parents of note as a subversion of the entire Star Wars mythology. It’s also been seen as no answer at all, a failure to deliver on the setup, a stunning oversight or lapse in storytelling logic. The “chosen one” mythos—a crutch of genre franchises and YA adaptations—is just this tough to shake. (As far as I can tell, the reveal was anticipated by hardly anyone.) It’s as if the story of a prince or princess—the absolutely feudal ideology of fate by inheritance—is taken to be synonymous with story itself.

At present, this deeply conservative faith in bloodlines, this lobby for repeal of the estate tax, is quite incredible. We live within a real estate bubble turning the previous generation’s homes into leveraged castles and the children of the boom into de facto royals; we live with inequality made permanent by flat wages, neighborhood and school segregation, and a stock market making plain that hard work doesn’t pay off—the best way to make money is to already have it. We inhabit a world undone by the idea of heritage of racial pride. I can think of no better moral decision made with pop mythology than the simple rejection of destiny that is having Rey be “no one.” If in the next installment her parentage is re-revealed in the name of lore and an extra gear of plot mechanics, I will be as disappointed as Robert G, who went to the movies for a good time and to be respected only to “[have] animal rights issues thrown in there and a female who looks like she teaches gender studies in the role as an Army General with dyed purple and we’re all set.”

We have journalistically rent our garments over how many of our working-class (or not) brethren vote against their interests. But is that any surprise when we long for a world where heroes are born, not bred? Where our only hope is that this cruel lottery justifies our entitlement? As a culture, we are lost, and will be lost as long as our fantasies are of being told the same story we’re telling ourselves.

M. C. Mah is a writer living in Brooklyn, New York. His work has appeared in The Millions, Full Stop, The Rumpus, and elsewhere. Tweets bimonthly at @byMCMah. 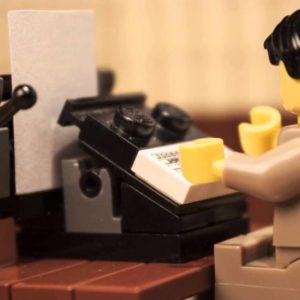 There are countless books that purport to teach you how to write. Many of them are good. Some of them are not quite as good....
© LitHub
Back to top