Autumn in Japan and the Ways We Cling to Dying Things

Pico Iyer on the Beauty of Impermanence

I long to be in Japan in the autumn. For much of the year, my job, reporting on foreign conflicts and globalism on a human scale, forces me out onto the road; and with my mother in her eighties, living alone in the hills of California, I need to be there much of the time, too. But I try each year to be back in Japan for the season of fire and farewells. Cherry blossoms, pretty and frothy as schoolgirls’ giggles, are the face the country likes to present to the world, all pink and white eroticism; but it’s the reddening of the maple leaves under a blaze of ceramic-blue skies that is the place’s secret heart.

We cherish things, Japan has always known, precisely because they cannot last; it’s their frailty that adds sweetness to their beauty. In the central literary text of the land, The Tale of Genji, the word for “impermanence” is used more than a thousand times, and bright, amorous Prince Genji is said to be “a handsomer man in sorrow than in happiness.” Beauty, the foremost Jungian in Japan has observed, “is completed only if we accept the fact of death.” Autumn poses the question we all have to live with: How to hold on to the things we love even though we know that we and they are dying. How to see the world as it is, yet find light within that truth.

This year, however, autumn’s no mere decorative riddle. Four days after my father-in-law’s death, I was back in Japan and taking a train to the station in southern Kyoto, just down the lane from the most important of all the land’s 22,000 harvest shrines, its 10,000 orange torii gates leading up and up a hillside of tiny statues and secret hollows. Posted alone outside the tiny wooden house where her parents had lived for five decades, Hiroko let me into the damp, stone-cold entrance hall, and led me up the short, winding staircase to two near-empty rooms.

In one, I saw a single bed, a chest of drawers; in the other, a bare tatami space and, within a dark corner, the household shrine, with a small framed photo of Hiroko’s father on it, ghostly pale, the last time we took him for a drive. Behind him, a black-and-white picture of his longtime antagonist, his mother-in-law, severe in black kimono.

For 30 years or more, the gray shutters opening out onto the street rattled up every morning, and Hiroko’s mother, in her worn apron, cat sleeping by her side, took her seat in front of a row of candies and soft drinks, to hand them out with smiles to passing kids and do a little business; behind her, in the bathroom-sized main room, her small, trim husband sat on a cushion on the floor, around a low table, taking care of accounts and sipping green tea, as horses clattered past on a small TV.

My father-in-law, in the Japanese way, had officially become a member of his wife’s family after going into hospital in his thirties. “If anything should happen, will you protect my wife and kids?” he’d asked his own mother, and she, with characteristic briskness, always hungry for adventure, answered, “No.” So he’d taken on the name of his wife’s clan, and lived as a lone outlier from Hiroshima amidst wife and sister-in-law and mother-in-law, and all the constant whispers of a small, traditional Kyoto neighborhood.

Now, after all these years, there’s almost nothing left in the tiny house. Hiroko shows me the albums of pre-digital photos her father used to keep under his pillow, of the one foreign holiday he took, when I brought him to California for five days. The images of Fisherman’s Wharf and the beach at Carmel that he brought out to impress all who visited so they could say, “How great!” and hurry off. Next to the photos, the binoculars on which he’d emptied nearly all his savings, one hour after arrival, so he could take in the larger world he’d always dreamed of. Throughout the nine-hour flight, he’d never nodded off, lest he miss a special moment.

We gather a few supplies, and take a cab to the nursing home five minutes away where Hiroko’s mother is now living: a tiny room, with one thin bed and a dresser on which sits a small framed picture of her late husband, cradling their two-year-old great-granddaughter.

I’m humbled by Hiroko’s emotional efficiency; I wouldn’t have had the courage to tell this 85-year-old woman, who’s just lost her husband and much of her mind, that she’s now losing her home as well, for an anonymous cell. But if mother and daughter tried to share a space for even a month, we all know, neither would make it to the second week.

When we step into the small room, it’s to find my mother-in-law gasping for breath, shoulders heaving up and down as she tries to catch some air. Hiroko bustles the old lady into sweater and socks, and, commandeering a wheelchair, steers her into an elevator and down into a waiting taxi. After we get out, ten minutes later, we might be entering a post-nuclear nightmare. In every chair in the large, bare entrance hall of the local hospital, a prospective patient is sitting in silence as red digits ash on screens above a broad desk. Hiroko parks her mother’s wheelchair next to us, bundling the old lady up in blankets, and we await our turn.

Since Hiroko’s son and daughter came into the world, her parents have become “Grandpa” and “Grandma” to one and all.

“No, Grandma,” my wife explains. “He died. Don’t you remember? Last week he got pneumonia, and he had to go into the hospital.”

“Ah yes,” says the old woman. “He died. The tenth of the month. He always did love the races.”

She returns to her silence, staring straight ahead of her, as other elderly souls are wheeled this way and that.

“So you and I are going to live alone?” she asks at last.

“No, Grandma,” says Hiroko, struggling to keep calm. “I have a job in Nara, remember? If I don’t work, we can’t eat. You have a new home.”

I reach for Hiroko’s hand, as I see her struggling to stay afloat.

“You’re not alone, Mother. You have me. You have your grandchildren. Don’t you remember Soyo, your great-granddaughter?”

“What about Masahiro?” says her mother. “Maybe your brother will take me in, now you’re refusing?”

“I have two children,” announces the old lady to all the world, shoulders rising and falling as she struggles to breathe, “and I have to live in a nursing home alone. Until I die.” 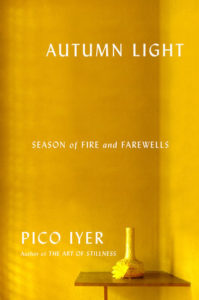 Excerpted from Autumn Light by Pico Iyer. Copyright © 2019 by Pico Iyer. Excerpted by permission of Alfred A. Knopf, a division of Penguin Random House LLC. All rights reserved. No part of this excerpt may be reproduced or reprinted without permission in writing from the publisher.

Embedded with the Beating Heart of Madagascar's Literary Life 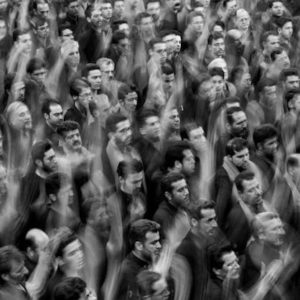 For a period of time after college, I lived with a shaman in Norway. He was an energetic, balding man with a stained yellow...
© LitHub
Back to top
Loading Comments...