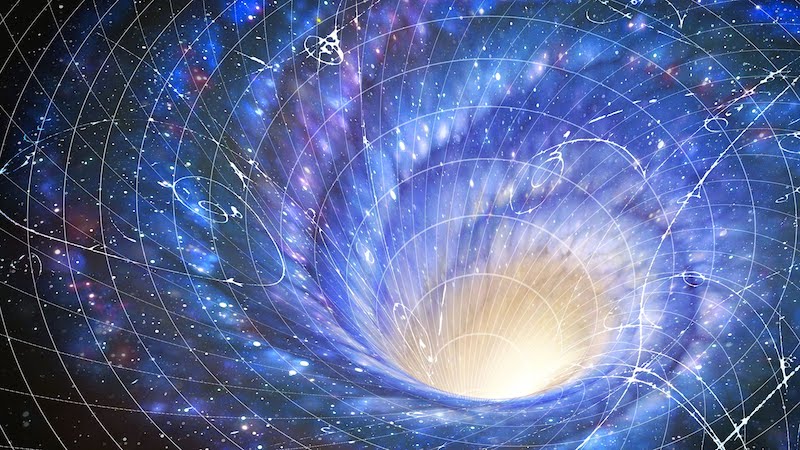 On Lizard Aliens and Gothic Fairies at Norwescon

Writing novels is not a horse race, or, if it is, it is the slowest most uneven, chaotic horse race ever, with horses giving up, pulling their manes out, wandering around suddenly in confused circles, then a year (or five, or ten) later, taking off and racing over the finish line after everyone’s gone home and forgotten that the race even existed.

Writers don’t get into writing for the competition. If they did, they’d need to develop armor to protect the raw, hyper-alert sensitivity that, some days, makes it hard to even walk out the door. And they’d probably need to exchange their writing uniform of baggy track pants and old sweaters covered in toast crumbs for sleeker, shiner gear. Writers get into writing because they love to read and because they have something forming inside of them, like a giant egg that can require up to ten years of gestation. They hope, but do not know for certain, that what they’ve spent a chunk of their lives hatching is worthy of sharing with others. They live mostly in their heads and love the low overhead of pen and paper or keyboard and screen.

And then they publish a book, if they’re lucky, and their publishers, if they’re good publishers, enter their book into contests. And suddenly, they’re pitted against other writers for a prize that only one of them can win.

This January, I was nominated for the Philip K. Dick Award for my book The Mercy Journals. I got a surge of happy hormones and imagined vistas of doors, wallets, and book covers opening, but as the event neared, my ambivalence grew. I wanted to win but also felt a falseness to it, a discomfort, an affinity for my fellow nominees, and the knowledge that all our books were deserving and good. I think of writers as mostly a horizontal tribe, people who work beside each other, people who avoid hierarchies.

As the date of the announcement approached, I found my anxiety about the awards dinner growing (as John Cleese’s character says in Clockwise, “I can take the despair, it’s the hope I can’t stand.”). I dreaded all our rapidly beating hearts and the element of spectacle and how it would feel, not so much to lose, but to be witnessed losing. I imagined my awareness of the audience’s pity and having to arrange my face to appear pleased by focusing on my happiness for the winning nominee, saving the inevitable whopping soupçon of disappointment for when I was alone later. My mind kept turning over, searching: There must be a better way to get word out about a book. But what kind of PR attention would the press release EVERYBODY WINS get?

The winner of the Philip K. Dick Award is announced at Norwescon, which I assumed was a traditional publishing conference. I drove down from Vancouver, Canada to the DoubleTree Hilton hotel near SeaTac Airport, the hour and a half of bumper-to-bumper Seattle traffic rendered a mere distraction by the audiobook of Philip K. Dick’s Flow My Tears, The Policeman Said, a title I consider perfection. My hotel room wasn’t ready, so I went looking for the registration—only to find that I had entered an alternate universe. 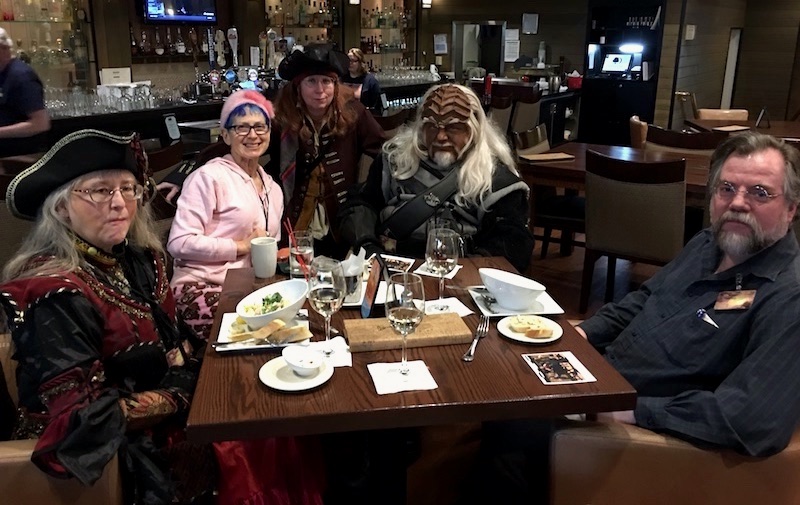 People were dressed in studded canvas kilts and Victorian welder’s glasses, leather corsets with low-cut milkmaid blouses, long dresses with tulips and butterflies and fantastical amphibians attached. Their hair was every color and structure; characters from Star Wars discussed chess by the stairs, lizard aliens spoke with gothic fairies, and Steampunk versions of all the above nodded at one another. Warriors with blue skin carried giant wooden hammers. On the elevator, a costumed woman wheeled in a double pram filled with five miniature dogs, each in its own basket. “Oh, what a basket of adorables!” exclaimed a fellow attendee in beige rags, body paint, and a geometric hatchet for a head.

It was a sentence that broke its barriers and started floating out over everything, like a soft superhero cape. The whole conference was a basket of adorables–weird and gentle folk who loved science fiction and dressing up, who had degrees in advanced physics from Harvard or personal, comparable inner degrees. It was as though a throng of introverts had magically transformed for the Easter weekend, come out of their hiding places, and bloomed in radiant, ultraviolet expression. If one had to go through a gauntlet, this was the place to do it.

That afternoon, my fellow nominees and I sat on a panel led by Gordon Van Gelder, a long-time administrator for the Philip K. Dick Award. He described it as a prize for misfits, the “I don’t get no respect” award. Only books that were never released as hardcovers are eligible because Dick’s books—and most science fiction books in the 60s and 70s—were only published in mass-market paperback. Although the price differential between a paperback and hardcover has shrunk considerably over the years, the committee still feels that the innovative hidden treasures of the genre, which the Award targets, are primarily released in paperback. 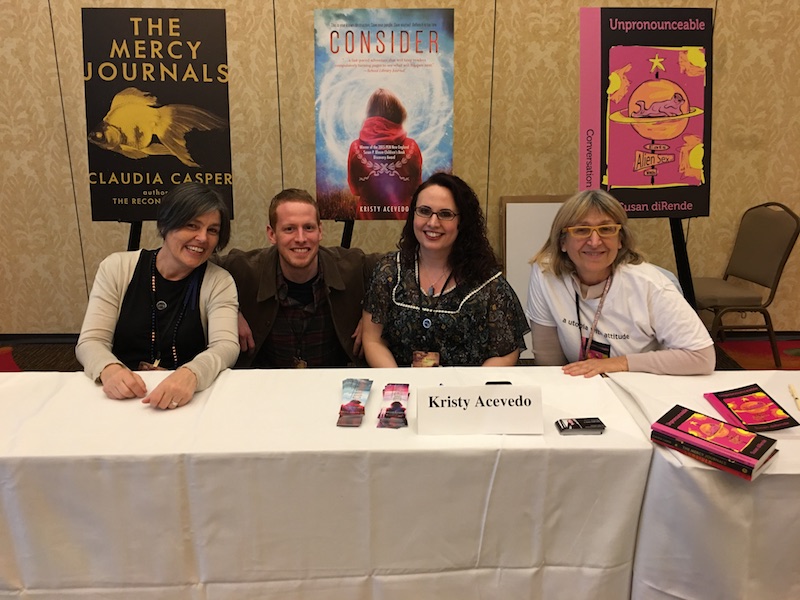 That evening, we entered a brightly lit banquet room filled with tables. Easels at the front displayed large posters of our books, each wildly different from the rest, and a tribute to a wide-ranging jury. The program was drinks, speeches, dinner, the six authors reading an excerpt from their work, and then, the announcement.

My table included a couple who had volunteered at the conference for over 20 years, a man who had retired from running the conference and his wife, a middle-school teacher and dog lover, and a librarian and her husband who’d ridden down from Vancouver on motorcycles. The conversation flowed from the future of the species to new developments in energy storage technology to Elon Musk to living on Mars. Our table was still deep in this conversation when it came time for the nominees to read.

I’d always been slightly frustrated reading from my book because its intricate construction means that any excerpt I choose loses impact when separated out from the whole. But tonight, I’d chosen a new passage that matched the weird intensity of the evening, and as I began reading about the chorus of singing worms trying to seduce my hero to join them on the other side of the grave, I had a revelation: this was the passage, this was the audience, this was the moment I had been waiting for. By the time I finished the last line, I was vibrating with the intensity of the connection.

Reader, I won. And I went for the full joy ride; a wide grin stayed on my smacker for the rest of the week. It’s too early to say what difference the award will make to the book’s life, but it gives me a sweet answer when people ask how’s the book doing, it gives my stalwart publisher and agent something to leverage in selling film and television and foreign rights, and, maybe, just maybe, the part of me that still anxiously looks around for predators or other forms of annihilation has relaxed a smidgeon.

At the end of the evening when everyone at our table got up to leave, I realized that one of my dinner companions was wearing a tail, which swished through the crumbs on his dessert plate as he walked away. In that moment, the hierarchical nature of the competition seemed secondary to the feeling of community it fostered, to its ability to gather together a basket of adorables united by a shared love of books and the worlds they create.

Claudia Casper is the author of The Reconstruction, The Continuation of Love by Other Means and The Mercy Journals, which received the 2017 Philip K. Dick Award. She lives in Vancouver.

10 Books by Czech Women We'd Like to See in English 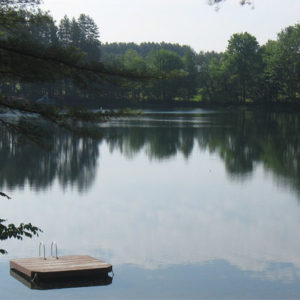 In 2012, I was at the Boston Film Festival, and a talented filmmaker whose short film I’d just seen was telling me that she...
© LitHub
Back to top
Loading Comments...