Atmosphere of Hope: Searching for Solutions to the Climate Crisis 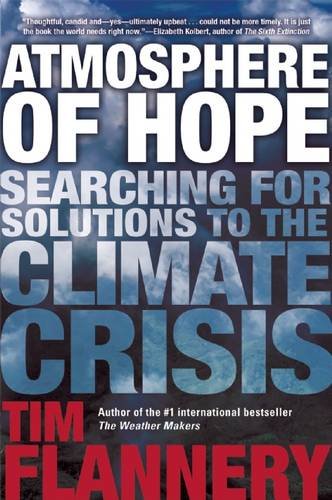 The following is from Tim Flannery’s book, Atmosphere of Hope. Flannery is a leading writer on climate change. He has held various academic positions including Professor at the University of Adelaide, Director of the South Australian Museum and Principal Research Scientist at the Australian Museum. A frequent presenter on ABC Radio, NPR and the BBC, his books include Here on Earth and The Weather Makers.

Yes, we may find technological solutions that propel us into a new golden age of robots, collective intelligence, and an economy built around ‘the creative class’. But it’s at least as probable that as we fail to find those solutions quickly enough, the world falls into apathy, disbelief in science and progress, and after a melancholy decline, a new dark age.

Of course it is good to plan for distant targets. But in climate negotiations thus far the idea of planning for 2050 is proving more of an impediment than a benefit. Many developed countries want a zero target for carbon emissions by that date, while developing countries want to keep open the option of having some fossil fuel use beyond that date, in case they cannot make the transition to clean energy fast enough. Despite very lengthy discussions no agreement has been reached. Numerous nations, states and cities have, however, set 2050 emissions reduction targets.

The pledges are typically of reductions of at least 80 per cent on 1990 levels, with some pledging to eliminate carbon emissions entirely. Understandably, the pledges are short on detail, but this does not render them meaningless. Rather, they are useful political instruments for indicating the earnest intentions of the parties involved.

The problems nations face in detailing plans of action out to 2050 are formidable. To gain a sense of the difficulties involved, imagine you are living in 1915, and trying to set targets for technological change, politics and the environment as they might exist by 1950. In an era of canvas biplanes, horse-drawn wagons and empires, it would be near impossible to foresee jet aircraft, atomic power, the spread of Communism or the ubiquity of automobiles. The rate of change in the twenty-first century is already greater than that of the century preceding it. Many believe the world of 2050 is genuinely unimaginable from today’s perspective, and that therefore laying out detailed roadmaps is pointless.

What should we be aiming for by 2050? In 2007, a group of researchers set out to assess the long-term climate change implications of national emissions reduction targets for 2050. The

University of Victoria’s Andrew Weaver and his team concluded that:

Even when emissions are stabilised at 90 per cent below present levels at 2050, [the] 2.0°C threshold is eventually broken. Our results suggest that if a 2.0°C warming is to be avoided, direct CO2 capture from the air, together with subsequent sequestration, would eventually have to be introduced in addition to sustained 90 per cent global carbon emissions reductions by 2050.

It’s important to understand that when Weaver and his team talk of the 2.0°C threshold, they are talking about a 50/50 chance of staying below that threshold. In order to give us a 75 per cent chance, we’ll need to decarbonise earlier and faster. That’s why so many believe that for humanity to have the best chance of avoiding a world warmer than 2.0°C above the pre-industrial level, the burning of coal, oil and gas without carbon capture has to be a distant memory by 2050. And even then we will also probably need third-way technologies to reduce the atmospheric burden of CO2. So, over the next few decades some of the largest corporations that exist today—among them Exxon Mobil, Anglo American and BG—must either lose all value and so cease to exist or change their business model completely. And in their place other corporations must emerge, investing trillions of dollars on clean energy.

A recent UN study outlines how global emissions might be cut deep and fast. The Deep Decarbonisation Pathways Project (DDPP), headed by the United Nations secretary-general, Ban Ki Moon, shows how 15 countries (Australia, Brazil, Canada, China, France, Germany, India, Indonesia, Japan, Mexico, Russia, South Africa, South Korea, the UK and the US), which together account for 70 per cent of the world’s greenhouse gas emissions, could together cut their emissions in half while tripling economic output. So, the roadmap to achieve steep reductions exists. But, dismayingly, the DDPP found that very few countries have looked seriously at how they might do their bit to ensure that we stay within the 2.0°C limit.

The International Energy Agency has examined the problem from a different perspective, asking how much we would need to ramp up deployment of renewables if we were to stay within 2.0°C. Together, solar, solar thermal and wind need to be contributing half of all electricity generation by 2015. Solar’s share (16 per cent) would require deployment of 124 gigawatts, at a cost of US$225 billion, annually. That’s two or three times the industry’s current level of growth. Wind’s share (15–18 per cent) requires its annual rate of deployment to rise from 45 gigawatts in 2012 to 65 gigawatts by 2020, 90 gigawatts by 2030 and 104 gigawatts by 2050. Solar thermal’s contribution (11 per cent) will need to grow from almost nothing today.

The IEA’s 2014 report on future global energy use sees a very different future. It projects that renewables will be contributing only 33 per cent of global energy by 2040 and that demand for all fossil fuels will grow until that time. Depressingly, this all adds up to a world which has lost the opportunity to keep warming within 2°C, but instead is committed to a world 3°C warmer, or even more. As Bill McKibben so ably puts it (referring to the fossil fuel industries): ‘Their vast piles of money have so far weighed more in the political balance than the vast piles of data accumulated by the scientists.’

For all the opinions and uncertainties with which we approach this world just 35 years away, there are a few enduring truths that can be relied upon. One is that innovation is driving economies as never before. But while innovation is transforming the economics of renewable energy, innovation is not always green. Fracking, tar-sands mining and the petrochemical industry are all benefitting from innovation. We can only hope that manufacture of solar PV and wind turbines, with their astonishing capacity to get costs out of the production processes, will benefit more from innovation than the fossil-fuel industries do.

Another truth is that the volume of fossil fuels within our grasp is growing. As recently as a decade ago climate scientist James Hansen felt that while humanity had to limit the burning of coal, it could exploit all the known sources of oil and gas without breaching the 2°C threshold. Fracking and other unconventional ways of mining have so expanded accessible reserves of oil and gas that they have demolished that comforting idea. We now know that long before 2050 we must have eliminated the burning of all fossil fuels, if we are to stave off a climate crisis.

I have mixed feelings about our future. Emissions have grown too fast, and their impacts on the climate system have been severe. And I’ve had my hopes dashed once before, in Copenhagen in 2009, making it hard to place my remaining reserves of hope in the Paris climate meeting. But I also feel that things have changed fundamentally, and for the better, in the last few years. The threats are accelerating beyond expectation, but so are the opportunities. There is real hope in the IEA findings that global emissions growth has stalled even as the economy has grown. And the clean energy revolution, with its promise of clean power and electric vehicles, now seems unstoppable. Moreover, the arguments of the deniers are now transparently wrong, and outdated. The thought that they might deny the world a last chance for a better climate future is perverse. Even grotesque.

I grew up in an age of technological optimism. We thought that each decade would be better than the last. I thought that this was the way it would always be. But speaking to young people today, I realise that they have a very different view. They fear that their lives will be poorer, less stable, less enjoyable than those of their parents and grandparents. I want them to know that there is hope—that their new-found voice is making a difference—and, whether through activism, community projects or building new, green businesses, they will change the world. But members of older generations still have a disproportionate influence. Younger people need to be given the chance to create a better world for themselves.

Above all, it’s now clear that the tools required to avoid a climate disaster already exist, even if some of them require more research and development. Between deep, rapid emissions cuts and third-way technologies, we can do it. It really is over to you. Every one of you. We can now see the finishing line. Whether we win the race for a better future is your choice.

From ATMOSPHERE OF HOPE. Used with permission of Atlantic Monthly Press. Copyright © 2015 by Tim Flannery.

Interview with a Bookstore: Prairie Lights 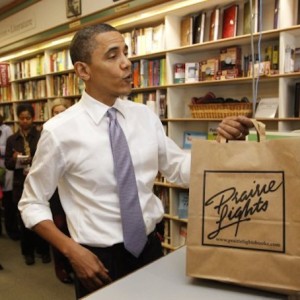 Interview with a Bookstore: Prairie Lights Jim Harris had finished all of the work for a PhD in History and was stalled on his dissertation. He then started working...
© LitHub
Back to top