What effect can geography and history have on a work of fiction? In his introduction to the American edition of his novel The Gallows Pole, Benjamin Myers describes the process of researching his novel. He’d left London for life closer to where he’d been raised; he and his wife ended up living in the northern English town of Mytholmroyd. It was there that he became interested in the life of 18th-century counterfeiter David Hartley, the real-life figure who became the subject of the novel.

As he learned more and more, Myers discovered that one of Hartley’s adversaries had spent time working in the house where Myers lived. “I was inadvertently part of their continuity, the latest link in a chain from a tough and troubled past to a modern digital world,” Myers writes. “Sometimes life gifts you such signs and prompts. A writer’s duty is to act upon them.”

I’ve seen the description “folk crime” used to describe Myers’s books. It’s one that sits neatly beside the concept of folk horror. (An article at The Quietus described the films where the genre developed as dealing with “brutal power struggles, cruel and regressive social hierarchies, and the land’s capacity for chaos and destruction.”) As I read more and more stories of the uncanny from England, I’ve found myself thoroughly entranced by the concept. In reading, say, Lucie McKnight Hardy’s recent novel Water Shall Refuse Them, there’s something beyond beguiling about the way the novel’s plot involves small-town resentment of a particular family due to the actions of their ancestors during the Black Death.

Some of my interest in folk horror comes from my penchant for reading horror fiction. But part of it also comes from the way that folk horror is far less represented on this side of the Atlantic. There is, obviously, a reason for that, tied in to history and the movement of people. The closest American counterpart to the British folk horror I’ve been enjoying as of late is Mapping the Interior, a short novel by the Blackfeet author Stephen Graham Jones. Strictly speaking, I’m not sure that anyone other than an Indigenous author is capable of writing a work of American folk horror—though I’m happy to be proven wrong on that.

The blend of folk horror and the apocalyptic is not confined to the American experience.

Mapping the Interior is a book about fathers and sons, though it’s also about land, history, and unfulfilled dreams. It begins with the protagonist, an Indigenous teenager named Junior, seeing what appears to be his father’s ghost—but his father as he wanted to be, in the role of a traditional dancer, as opposed to who he was in life. “American history is an atlas of the psychocultural scars that transformed indigenous people’s autochthonous relations with the land into the measured/measurable marks of settler-colonialism,” wrote Sean Guynes when reviewing the book for World Literature Today.

It’s fair to say that Mapping the Interior turns that atlas into a work of slowly simmering horror, riffing on vampirism and turning the familial bonds that populate the book into something uncanny and disturbing. John Langan’s review of the novel for Locus explored the duality at its heart: “Although a ghost story, it’s as much a tale of haunting, of the absences that bend and warp our lives.”

Jennifer Givhan’s novel Trinity Sight takes on a different sort of absence in an Indigenous context. Here, there’s also plenty of horror to be found, but in a more apocalyptic context. Calliope Santiago, the novel’s central character, is an anthropologist working in the southwestern United States when a bizarre occurrence—one which is unexplained until novel’s end—causes everyone around her to vanish, and places her in a largely uninhabited world where strange creatures periodically rise from the landscape to menace her and some of the other survivors of the event.

Trinity Sight abounds with the region’s history—both in terms of Indigenous traditions and, more recently, its use for nuclear testing. Givhan is Mexican-American, and had discussed her family’s connection to the Laguna Pueblo; in the case of this novel, she’s created a work that synthesizes a host of cultural histories that have sometimes run in parallel and sometimes been at odds with one another. While the premise of her novel is a classically pulpy one, the details are where it becomes most memorable; again, the long history of the American Southwest (in other words, dating back to a time before it was the American Southwest) is what makes this novel click. The landscape is hauntingly connected with the novel’s plot, and attempting to separate the two would be impossible.

This blend of folk horror and the apocalyptic is not confined to the American experience. Noongar writer Claire G. Coleman’s novel Terra Nullius falls into a similar vein, albeit on the other side of the world. It is not a horror novel per se, but it’s certainly an apocalyptic one—and there are more than a few unsettlingly visceral moments, both in terms of the action within the novel and the philosophical implications of its plot.

Coleman’s novel finds history repeating itself, but with colonialism being applied to the entirety of humanity.

Unfortunately, to get into just why that is, I’m going to have to spoil a bit of the book. Terra Nullius begins with what appears to be a retelling of the colonial history of Australia, with religious zealots and a cruel military force arriving from elsewhere to imprison and oppress the local population. There are a handful of dissonant moments that suggest something else is happening, but it’s not until about halfway through that Coleman reveals the true nature of what’s happening here. The natives being oppressed? That’s not confined to Indigenous Australians; that’s happening to all humans. The zealous forces who question whether the oppressed are fully human? Aliens. Essentially, Coleman’s novel finds history repeating itself, but with colonialism being applied to the entirety of humanity.

Terra Nullius offers a fairly traditional science fictional plot; what matters about it is the way in which Coleman tells the story, and the thematic weight that its story demands. On one level, this is about the sins of the past being revisited and re-enacted on a global scale; on another, this is a book about a crisis so severe it prompts humanity to band together on a level it never had before. On that level, it’s not unlike Ursula K. Le Guin’s The Lathe of Heaven—which, while nominally a science fiction novel, also has more than a little horror in its execution. Le Guin’s own background in anthropology seems more than a little relevant to this discussion as well.

Folk horror and apocalyptic fiction don’t necessarily seem similar on the surface: one is generally intimate in its scope and subtle in its horrors, while the other is inherently grandiose. But a book like Givhan’s finds an interesting middle ground between these two modes, showing that they may not be as different as they can appear on paper.

In a 2018 interview about Terra Nullius, Coleman discussed the historical origins of her novel. “I discovered that the evidence of massacres is all around us in Australia,” she said. “To research the history of Australia all that is needed is open eyes, anyone paying attention will see it all, it’s in every information center in every town, on plaques on statues, everywhere.” How do you write about history when history has the weight of horror? The fiction discussed here suggests a few paths worth exploring further. 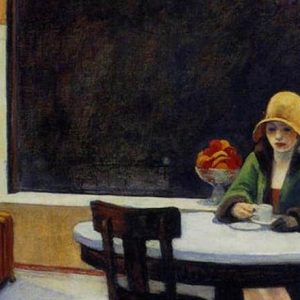 When I went to grad school, I brought Harold. Harold is my dog. He’s 80 pounds, a pit bull terrier mixed with something...
© LitHub
Back to top