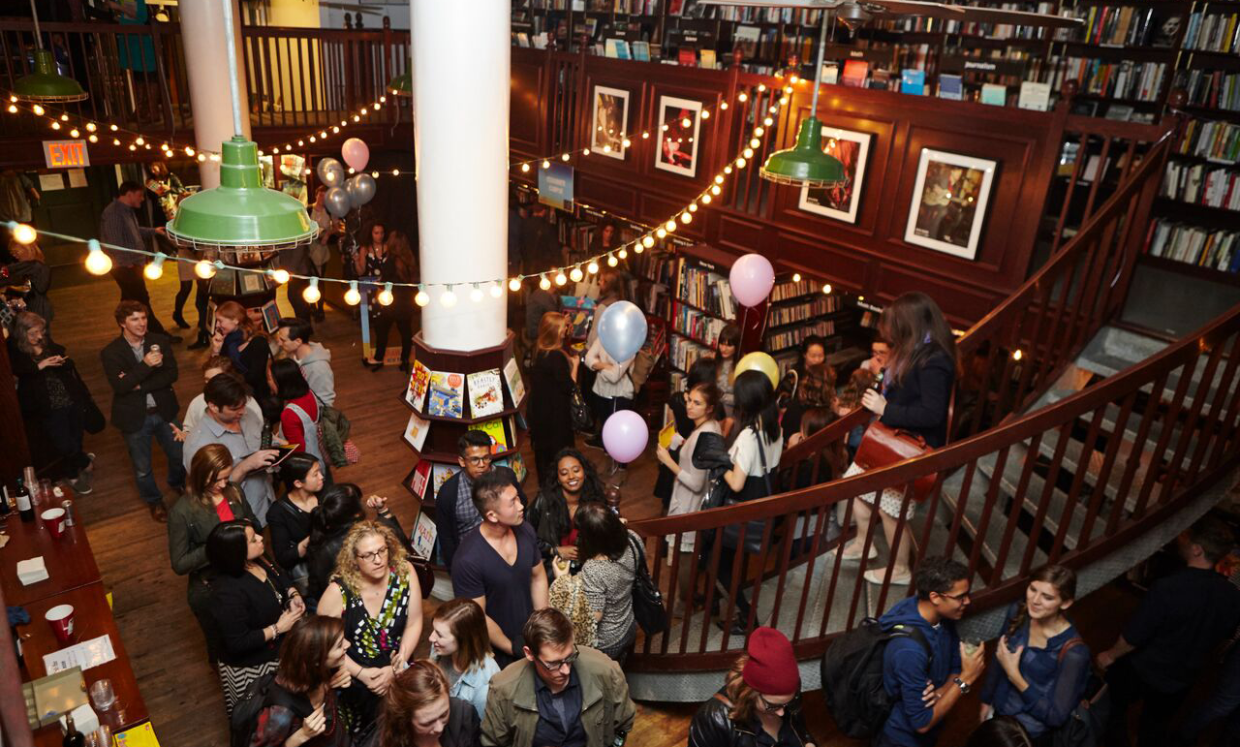 By Blair Beusman and Jess Bergman

As we make our way through a nicely full room toward the center of the store, where a high-stakes game of pictionary presented by the National Book Foundation is unfolding, we spot PEN America Director of Literary Programs and organizer of the night’s festivities, Paul Morris. When we ask him who, in particular, we should speak with, he suggests everyone, because “LitCrawl is a truly democratic literary event” and tells us he won’t comment further unless we’re getting a quote. But we’ve just done that! we remind him. “I don’t think it was good enough. Let me see it.” He suggests this as an alternative: “PEN is about free expression and literature. Tonight we’re achieving both of those things.” As if to illustrate this point, BuzzFeed Books Editor and carnival co-host Isaac Fitzgerald yells “fuck yeah” from the stage. But is the open bar still open? We investigate.

Free drinks (just barely) in hand we stop to chat with literary pictionary presenter and former National Book Foundation 5 under 35 honoree Alex Gilvarry, who bears a passing resemblance to Keanu Reeves. “Keanu?” He is doubtful. “Maybe. I’m like late 90s Keanu.” We reminisce about his victory in this summer’s NBF charity basketball game, The Other NBA. “The publishers are always telling us ‘No,’ so it was great to just fucking kick their asses.”

Stepping outside for some air we catch up with perennially charming Grove-Atlantic Senior Editor, Peter Blackstock. Catapult Publisher (and co-founder of this website) Andy Hunter soon joins us and describes the “Fabio shirt” he *almost* bought for Electric Literature’s Genre Ball, but vanishes into the night before we can get further details.

Back inside, we overhear Alex Gilvarry in conversation with Restless Books’ Director of Marketing, Nathan Rostron who announces (presumably upon suggestion) that he’ll “think about getting a falcon.” Behind him, Tin House editor Rob Spillman—introduced by the ever-enthusiastic Mr. Fitzgerald as “a goddamned delight”—takes to the stage for Trivia Bingo, presented by Pushkin Press and the New York Review of Books.

After a foiled attempt to procure a tarot card reading on the future of publishing, NBF 5 Under 35 Honoree Tracy O’Neill, fresh off her duties running the HIP Lit Exquisite Corpse table, indulges us in a bit of Michelle Kwan gossip (not for publication). She also tells us, much to our surprise, that “HIP” is an acronym, not an adjective. We make several guesses as to what it stands for. Nobody knows. “Hip… imperial… pussy?” Tracy offers.

We manage—briefly—to corner Housing Works’ ever-busy Director of Public Programming, Molly Rose Quinn, who when asked for a summation of the evening, says, “Everyone got drunk and we raised a bunch of money in one night.” Hear, hear.

We cross paths again with Mr. Morris, who whisks us over to the evening’s co-hosts. “Mira Jacob is a badass,” Mr. Fitzgerald says of his co-host, citing the author and Pete’s Reading Series founder’s recent essay in Buzzfeed Books, “I Gave A Speech About Race To The Publishing Industry And No One Heard Me.” “This is actually a mad thing,” he tells us, gesturing to the crowd around him, before launching into a recollection of his first ever Lit Crawl in San Francisco, where he attended readings in tattoo parlors and laundromats. “Books and the literary world, which in my mind had been very highfalutin, suddenly seemed very accessible.” Speaking in similarly glowing terms of the evening’s success, Ms. Jacob says: “Neither of us would have done it without Paul.” Leaning in, she whispers conspiratorially, “He pulled this all together in two weeks, no shit.”

As the lights go up and we filter out with the crowd towards the after party at Puck Fair, we manage to track down the tarot card reader for what we’ve been after all night: the verdict on publishing’s future. “The future of publishing is actually really great,” Mr. Fitzgerald assures us, having just used his keys to free a balloon from the front display upon our request. But the cards tell a different story:

The past: DEATH. Death symbolizes transformation. The change brought by Death is unavoidable, and it brings a transition into the next level of life. This level is the Internet.

The present: Five of Rods, reversed. This card represents conflict, both outer and inner. Reversed, it indicates the desire to stand out among others of equal talent. The querent (publishing) does not have faith that it can overcome its competition.

The future: Three of Rods, reversed. Great plans that do not come to fruition. Sorry guys :(

The remaining revelers, for what it’s worth, seem undaunted.

If You Want To Write, Here's the Book For You 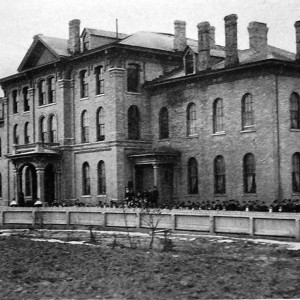 For the next nine days Literary Hub will help in counting down the days until the seventh-annual Irish Arts Center PoetryFest...
© LitHub
Back to top
Loading Comments...