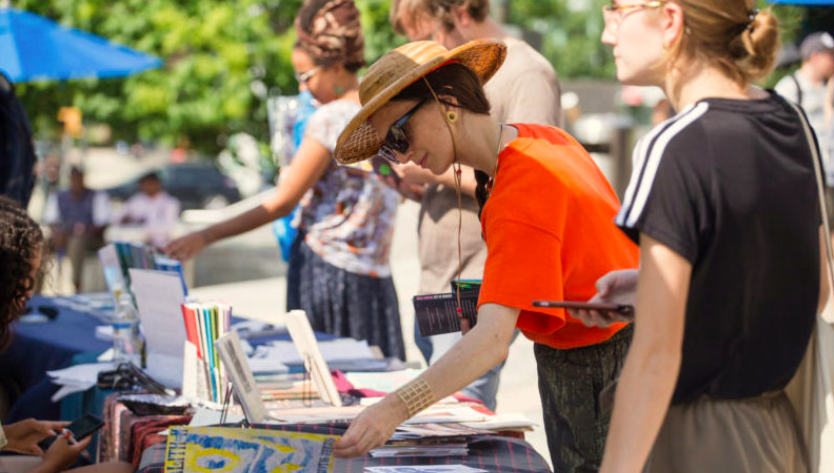 Tables of Books, Friendly Publishers, and a Bookmobile!

If you happened to be at the farmer’s market in Brooklyn’s Prospect Park this past Saturday, you might have trailed the vendor tents across the street to Grand Army Plaza and landed in the 2019 Small Press Flea, two concentric circles of book fair tables set up between the Soldiers’ and Sailors’ Arch memorial and the ornamented bronze gateway of the Brooklyn Central Library.

Co-hosted by BOMB Magazine and the Brooklyn Public Library, this pop-up book fair began six years ago with the initiative of BOMB’s Managing Director, Ted Dodson, who wanted to find a way to showcase the breadth and variety of Brooklyn’s local literary talent. “I wanted to start a community event to get back to supporting the literary and arts ecosystem.” Wanting especially to focus on the smaller voices in publishing, Dodson wondered, “How can I extrapolate from the general arts focus of BOMB to the broader literary community?”

Standing at the head of the circle, his back to the library’s entrance, Dodson greets passersby with high-fives and handshakes as we talk, occasionally interrupting himself to chat with someone, then apologizing as he slides back into our conversation. Everyone seems to know everyone, or know someone who knows someone else there. Children race around the booths and dogs drink from the fountains. People sit off to the edges of the plaza and read in the sunshine.

Six years ago, the Small Press Flea was just 12 exhibitors in the backyard of Brooklyn bookstore Unnameable Books. It was “a bunch of card tables on gravel,” says Jeff Waxman over by the House of SpeakEasy’s bookmobile. This year’s event includes more than double the inaugural list, boasting presses like Archipelago, Ugly Duckling Presse, Melville House, and publications like One Story, n+1, and A Public Space. Equally important is the diversity of the publishers, as the Flea includes queer and trans arts collectives (e.g., The Operating System), strictly feminist presses (e.g., The Feminist Press at CUNY), and presses that support traditionally marginalized voices (e.g., Black Sun Lit).

Described as “relaxed and open,” attendees and exhibitors alike prize the closeness of the event, the local feel of it. To Aiden Farrell of Futurepoems magazine, a non-profit specializing in innovative poetry and prose, the Small Press Flea is helpful to “put a face to the press. Especially at a time when everything is online, it’s great to connect to a reader.” People will come up to him and tell him they loved a book

Futurepoems published or “even better that they read it in a class.” In Farrell’s opinion, “It’s the best way to sell books. Straight from the publisher to the reader.”

Aside from the exposure each press and magazine gets by receiving people at their booths and informing them of their initiatives, the Flea is an opportunity to unearth their backlist. Archipelago Books’ Jill Schoolman says, “It’s hard for any bookstore to keep books for an extended amount of time,” so being able to put older books on display for the public is a way “to remind people that these books aren’t going away.” Calm in demeanor and soft-spoken, Schoolman tends to all those visiting Archipelago’s booth. She rings up customers and discusses the books in front of her; she takes the time to ask attendees about their interests and share in mutual admiration for certain authors. She is just one example of what goes on at every booth.

“I wanted to start a community event to get back to supporting the literary and arts ecosystem.”

Many who attend the Small Press fair compare it to its larger cousin, the annual Brooklyn Book Festival, that rears its head in the fall but is anticipated far earlier. Unlike the dense crowds and numerous publishers that attend that festival, during the Small Press Flea there is more space and time to interact individually with visitors, to share in thoughtful conversation.

Down the steps of the Central Library’s plaza, past the fountains, sits the House of SpeakEasy’s bookmobile, guarded by Partnerships Director Jeff Waxman. The bookmobile is parked between a food truck and a farmer’s market tent, where it can attract the most pedestrian traffic. Adding variety to the New York-based literary scene, the bookmobile features indie presses from all over: Portland’s Tin House, Dallas’s Deep Vellum, Minneapolis’s Graywolf, St. Louis’s Dorothy: A Publishing Project, and many more.

Before I can speak to Jeff, a couple approaches; they happened upon the bookmobile and decided to stop and browse. Before long the man says to his partner in a joking voice, “What about Men Explain Things to Me?” to which the woman replies, “Oh, I’ve read that already.” I turn to meet her gaze. We smile and nod in agreement. “Right?” she says. “Right,” I say.

Jeff Waxman is an old pro at engaging with oncoming visitors and always has something to say about the books they are considering. What he later tells me matches what I’ve observed of his interactions: “What’s unique about this event is that you get to interact with enthusiasts looking for a book on a sunny afternoon; it’s so much better than hearing about books from a publicist.”

With neither the crowds of the Brooklyn Book Festival nor the pressures of competing with big-name publishers, the Small Press Flea is inviting, warm, and rife with possibility and inspiration. This is networking at its most casual and personal, worthy of Dodson’s original vision for the Flea to, as he put it, “extend the [literary] family.”

Eleni Theodoropoulos grew up in Athens, Greece. She studied Humanities, Philosophy, and Creative Writing at the University of Texas at Austin and has interned for the Texas Book Festival and Bat City Review. She translates from Greek to English and reads fiction for Carve. Her creative nonfiction essay, “A Wish, A Witch, and the Tarot” is forthcoming from Michigan Quarterly Review.

5 Audiobooks to Help With Those End-of-Summer Blues 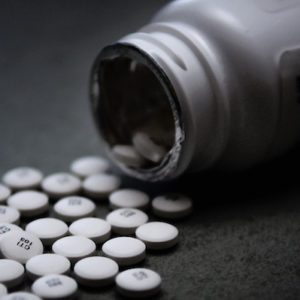 In 1995, two brothers, Raymond and Mortimer Sackler, were made honorary Knight Commanders of the Order of the British Empire...
© LitHub
Back to top