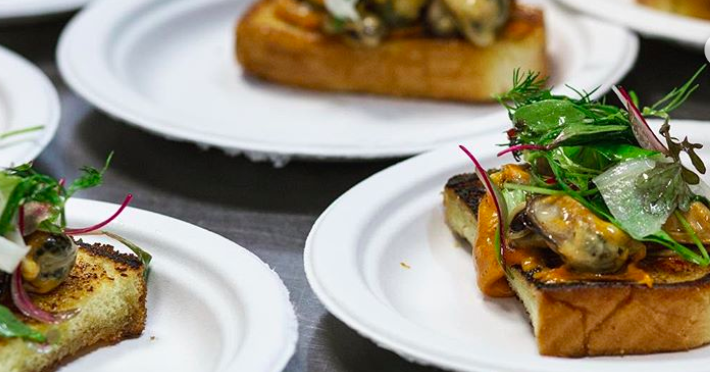 At a Dinner Inspired by Marlon James Latest Novel

Egg Restaurant is, even in the midst of Williamsburg’s final expansive explosion, an unassuming storefront, tucked into N. 3rd Street. You might simply walk by it, and even if you’d arrived (as I did) during an impromptu photoshoot featuring Egg’s head chef Evan Hanczor, author Marlon James, and Food Book Fair’s Kim Chou, you likely wouldn’t have assumed anything special was happening inside.

But then, through the door…

The sensory experience hits you immediately: people, lots of them, and they don’t quite know where to go; they gather their drinks (a spritz made with Forthave Spirits’ red aperitivo) and mill about in the front half of the restaurant. In the back half, there are tables with place-cards and adornments. Coats are hung, friends are met, drinks are sipped quietly in whatever corners are to be found. A playlist co-curated by James and the artist Raia Was snakes around the background, twinning with the scent of a custom candle by Hi Wildflower.

What, though, are we all doing here?

Tables of Contents is, as Hanczor tells us by way of introduction, an edible reading series featuring small plates and small readings, that explores the ways in which taste can change the perception of a text. Every once and a while, though, Hanczor creates (often in collaboration with the Food Book Fair, and this time with Riverhead as well) a larger multi-course dinner paired with a single novel, that puts his food in conversation with the text that inspired it. This is the tenth such dinner since 2012 (one of many I have attended).

Marlon James, the evening’s literary tastemaker (as it were), is invited up to set the scene. Dressed sharply in a gray jacket and black army pants, he reads a scene from Black Leopard, Red Wolf that features the main character Tracker describing a masquerade both to his companion Sadogo and to a mysterious interlocutor. Meanwhile, we snack on small satchels of nuts and plates of cured pork.

After being led back to our tables, introductions are made as the first three courses arrive, giving us an opportunity to not only acclimate ourselves to one another but to the food as well. Chef Hanczor eases us in: a spicy bone-broth soup; a soft-boiled egg, butter and bread; a small piece of blood sausage, topped with cream and berries.

It is at this point that time begins to dilate, as it should at all successful dinner parties.

The blood sausage is not the only exceptional piece of this opening salvo—there’s true palm drink as well. Chef Hanczor informs us that there’s only one place in Brooklyn to procure it, and we watch as it coats the insides of our glasses. The bottles are empty before anyone even realizes.

Then the meal truly begins. Riesling replaces the palm drink, followed by an array of greens, inspired not by any particular meal in the novel but by its many depictions of foliage and undergrowth. It’s hard to discern what the greens are, even as we assume they are variations on normal salad fixings—but they’re quickly devoured and replaced by bowls of soup that carry the aroma of miso, but of something else as well. “Lemongrass, fish, and blood,” our menu/bookmarks say—but what does that mean? Are we to dash this leaf full of reddish liquid into the soup? Am I actually tasting the iron tang of blood or is that just a confirmation bias? Does it really matter?

As the wine goes to our heads, we’re brought a pairing of the known and the unknown: bottles of Sorachi Ace from Brooklyn Brewery and plates of raw goat “and a plate to lick.” In reality, this means a scoop of goat tartare and two artistic splashes, vivid red, across each plate. The dining room grows quiet as everyone builds up the courage to attempt this latest.

And, readers, I tell you this: I licked the plate. So what if it could have been actual blood? You only live once, right, so why not enjoy it? And what looked like blood splatter turned out to be a beet juice reduction.

It is at this point that time begins to dilate, as it should at all successful dinner parties. Conversation deepens, enhanced by the red wine that followed the Sorachi Ace. The next two courses provoke much discussion about exotic meats: crocodile and ugali porridge, and charred antelope. The porridge surprises everyone for its notable taste experience—a nuttier, mealier version of grits—and the antelope is barely afforded time for reflection as we’re encouraged to grab a piece with our hands and chow down.

Then comes the curried goat—inspired by a dish that Marlon himself cooks for those lucky enough—a melt-in-the-mouth experience that has diners going to the very bone for one more taste. Having polished off what feels like an entire goat per table of eight, conversation—of day jobs far less exciting than our present circumstances, of marriages and books and subway troubles—opens up just enough room for the final course: a warm millet porridge with honeyed cashews, honey ice cream, and honeycomb.

Then the meal ends, suddenly, despite its length (not unlike the novel that inspired it). “I wanted people to smell the book, and to taste it,” James tells Hanczor as we all sip coffee and an amaro digestif (again from Forthave) while finishing the last of our porridge. We are sent off into the night with a candle, a pin, and a bag of Egg’s signature granola. “So you can remember us in the morning,” says Hanczor with a wink as he gently leads me out the door.

Drew Broussard is a writer, producer/curator of humanities programming, musician, and the co-host of the podcast So Many Damn Books. He lives in New York, with his fiancée and a dog named Ziggy Stardust.

Religious Cult, Force for Civil Rights, or Both? 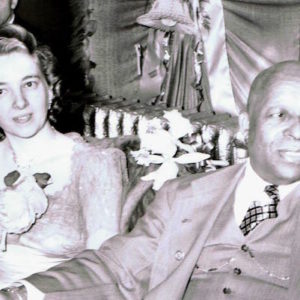 Religious Cult, Force for Civil Rights, or Both?

My second trip to heaven was more propitious than the first. I wasn’t alone this time, but accompanied by my friend Shannon,...
© LitHub
Back to top