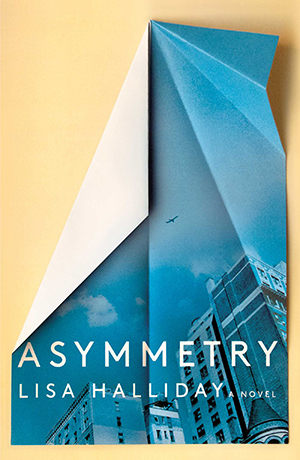 The following is from Lisa Halliday's debut novel, Asymmetry. In the first of three sections in the novel, young editor Alice begins an unexpected and tender relationship with an older, famous author. Lisa Halliday is a recipient of the 2017 Whiting Writers' Award. Her writing has previously appeared in The Paris Review.

Alice was beginning to get very tired of all this sitting by herself with nothing to do: every so often she tried again to read the book in her lap, but it was made up almost exclusively of long paragraphs, and no quotation marks whatsoever, and what is the point of a book, thought Alice, that does not have any quotation marks? She was considering (somewhat foolishly, for she was not very good at finishing things) whether one day she might even write a book herself, when a man with pewter-colored curls and an icecream cone from the Mister Softee on the corner sat down beside her.

“What are you reading?” Alice showed it to him.

“Is that the one with the watermelons?”

Alice had not yet read anything about watermelons, but she nodded anyway.

“What else do you read?”

They sat without speaking for a while, the man eating his ice cream and Alice pretending to read her book. Two joggers in a row gave them a second glance as they passed. Alice knew who he was—she’d known the moment he sat down, turning her cheeks watermelon pink—but in her astonishment she could only continue staring, like a studious little garden gnome, at the impassable pages that lay open in her lap. They might as well have been made of concrete.

“Who likes old stuff. See you around.”

The next Sunday, she was sitting in the same spot, trying to read another book, this one about an angry volcano and a flatulent king.

“Alice. What are you reading that for? I thought you wanted to be a writer.”

His hand shook a little as he broke off a square of chocolate and held it out.

Biting into her chocolate, Alice gave him a quizzical look. “Don’t you know that joke? A man flying into Honolulu says to the guy in the seat next to him, ‘Excuse me, how do you pronounce it? Hawaii or Havaii?’ ‘Havaii,’ says the other guy. ‘Thank you,’ says the first guy. And the other guy says, ‘You’re velcome.’ ”

Still chewing, Alice laughed. “Is that a Jewish joke?”

The writer crossed his legs and folded his hands in his lap. “What do you think?”

The third Sunday, he bought two cones from Mister Softee and offered her one. Alice accepted it, as she had done with the chocolate, because it was beginning to drip and in any case multiple-Pulitzer Prize winners don’t go around poisoning people.

They ate their ice cream and watched a pair of pigeons peck at a straw. Alice, whose blue sandals matched the zigzags on her dress, flexed a foot idly in the sun.

She looked at him.

He looked at her.

“Are you game?” he repeated.

Turning back to her cone: “Well, no reason not to be, I guess.”

The writer got up to throw his napkin away and came back to her. “There are plenty of reasons not to be.”

“They sat without speaking for a while, the man eating his ice cream and Alice pretending to read her book.“

Alice squinted up at him and smiled.

She shook her head.

“I’m an editorial assistant. At Gryphon.”

Hands in his pockets, he lifted his chin slightly and seemed to conclude this made sense.

“All right. Shall we take a walk together next Saturday?”

“I should take your number. In case something comes up.”

While another jogger slowed to look at him, Alice wrote it down on the bookmark that had come with her book.

On Saturday, it rained. Alice was sitting on the checkered floor of her bathroom, trying to screw tight her broken toilet seat with a butter knife, when her cell phone beeped: CALLER ID BLOCKED.

“Hello Alice? It’s Mister Softee. Where are you?”

“Oh, right around the corner. We could string up a couple of tin cans.”

Alice pictured a string, bowing like a giant jump rope over Amsterdam, trembling between them whenever they spoke.

“So, Miss Alice. What should we do? Would you like to come here, and talk a while? Or should we take a walk together another day?”

Alice wrote the address down on a piece of junk mail. Then she put a hand over her mouth and waited.

The rain flooded the crosswalks and soaked her feet. The cabs churning a spray up Amsterdam seemed to be traveling much faster than they did when it was dry. While his doorman made room for her by pressing himself into a cruciform position, Alice entered purposefully: long strides, blowing out her cheeks, shaking out her umbrella. The elevator was plated top to bottom with warped brass. Either the floors it climbed were very tall or the elevator was moving very slowly, because she had plenty of time to frown at her infinite funhouse reflections and to worry more than a little about what was going to happen next.

When the elevator doors opened, there was a hallway containing six more gray doors. She was about to knock on the first door she came to when another door, on the other side of the elevator, opened a crack and a hand came through, holding a glass.

Alice accepted the glass, which was full of water.

The next time the door opened, it seemed to swing wide on its own. Alice hesitated before carrying her water down a short hallway that ended in a bright white room containing, among other things, a draughtsman’s desk and an unusually wide bed.

“Show me your purse,” he said from behind her.

Alice set her purse down on the little glass table between them and unlatched it. She took out her wallet: a brown leather men’s wallet that was badly worn and torn. A scratch card, purchased for a dollar and worth the same. A ChapStick. A comb. A key ring. A barrette. A mechanical pencil. A few loose coins and, finally, three portable tampons, which she held in her palm like bullets. Fuzz. Grit.

He opened the wallet and removed her debit card, her credit card, an expired Dunkin’ Donuts gift card, her driver’s license, her college ID, and twenty-three dollars in bills. Holding up one of the cards: “Mary-Alice.” Alice wrinkled her nose.

For a moment, he alternated between looking at her and at the card, as though trying to decide which version of her he preferred. Then he nodded, tapped the cards into alignment, snapped a rubber band from his desk around them and the bills, and dropped the stack back into her purse. The wallet he lobbed into a mesh-wire wastepaper basket already lined with a white cone of discarded typescript. The sight of this seemed to irritate him briefly.

“So, Mary-Alice . . .” He sat down, gesturing for her to do the same. The seat of his reading chair was black leather and low to the ground, like a Porsche. “What else can I do for you?”

Alice looked around. On the draughtsman’s desk a fresh manuscript awaited his attention. Beyond it a pair of sliding glass doors gave onto a small balcony sheltered by the one above it from the rain. Behind her the enormous bed was made up so neatly as to look aloof.

“Do you want to go outside?”

“No one throws the other one over. Deal?”

Alice smiled and, still sitting five feet from him, extended a hand. The writer lowered his eyes to look at it for a long, doubtful moment, as though listed there on her palm were the pros and cons of every handshake he’d ever made.

“On second thought,” he said then. “Come here.”

From Asymmetry. Used with permission of Simon & Schuster. Copyright © 2018 by Lisa Halliday.

One of Our Greatest Inventions: The Beauty of the Brick 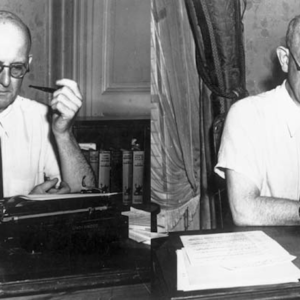 Lit Hub Daily: February 14, 2018 Happy Valentine’s Day! (really): 30 of the worst literary couples in history · How to write the perfect kiss into...
© LitHub
Back to top