Priyanka Champaneri for Her novel The City of Good Death

Restless Books is pleased to announce the winner of the Restless Books Prize for New Immigrant Writing, which each year will award $10,000 and publication to a first-time, first-generation American author. The 2018 prize goes to Priyanka Champaneri for her novel The City of Good Death, a novel about the proprietor of a death hostel in Benares, the Indian city where Hindus come to die a holy death. The City of Good Death will be published by Restless Books in Spring 2020.

Priyanka Champaneri was born and raised in Virginia. She received her MFA in Creative Writing from George Mason University and has been a fellow at the Virginia Center for the Creative Arts numerous times. The City of Good Death is her first novel.

The City of Good Death is an expansive novel about the proprietor of a death hostel, Pramesh, in India’s sacred city of Benares, where Hindus come to die a holy death, and the sweeping journey of discovery he embarks upon after finding his cousin and childhood best friend drowned in the Ganges. Priyanka Champaneri beautifully explores the sacred and the afterlife in this cinematic and emotionally gripping work about living and dying with dignity.

Champaneri draws on her personal navigation of identity and culture, reconciling her Indian heritage and Hindu religion within a Western construct as a first-generation immigrant who was born and raised in the United States. The City of Good Death confronts family, religion, and belonging in ways that reflect Champaneri’s cultural dualities. It’s a novel full of compassion as Champaneri deftly navigates Pramesh’s relationships with his dying patrons as he himself struggles to understand the ramifications of his cousin’s death. Introducing readers to an unforgettable cast of characters who all cross paths in Pramesh’s hostel on this holy pilgrimage, this ambitious novel offers readers a unique insight into the Hindu concepts of the afterlife and the sacred, and the universally recognizable desire for empathy and understanding.

Priyanka Champaneri on writing The City of Good Death…

Born to Indian parents hailing from the state of Gujarat, I am a first-generation novelist who has lived my entire life in Virginia. My parents filled my childhood bookshelves with fairy tales and richly-illustrated volumes of Hindu religious myths, and they freely shared their memories of childhood in India. As the years passed, I grew to know these stories until I felt that they lived inside of me. When I finally visited India as an adult for the first time, I had the unique experience of feeling the imagined country in my heart fuse with the very real and tangible land and people before my eyes. That simultaneous overlap and disconnect between reality and myth is something I have both struggled with and enjoyed exploring in my writing.

Set in the holy city of Banaras, The City of Good Death follows Pramesh, the manager of a hostel which specifically serves dying pilgrims seeking the ultimate solace of a good end. I have always had a faint knowledge that Banaras was an important city, but my interest was not fully piqued until a co-worker sent me an Associated Press article titled “Check-in and Die in Two Weeks, or Get Out.” As I read about the death hostels, I realized that I possessed a unique point of view: as a Hindu, I understood that these places of refuge for the dying were a perfectly practical solution to a goal that many in India have: dying a good death. But as someone raised in a Western society, I also understood how odd this attitude might seem to those unfamiliar with India, and especially Banaras, where death is so blatantly placed alongside everyday life. It took me eight years to fully explore and hone the story which burgeoned in my mind, but the end result is a novel and a writing experience which I am grateful for.

Read an excerpt from The City of Good Death.

My Parents' Wedding Was Arranged. I Wanted Something Different. 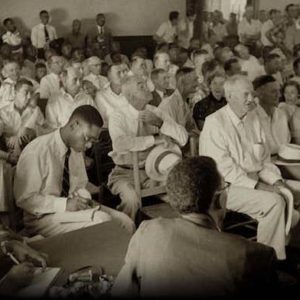 We think of memory as beginning in clarity then fading with time, but it is rarely so simple. Terrifying events get repressed...
© LitHub
Back to top