Anne Trubek on Learning About Book-Publishing By Doing It

On today’s episode, Anne Trubek, founder and director of Belt Publishing, discusses—among other things—what to tell people stuck at home who are now thinking of writing and publishing a book during the pandemic.

Anne Trubek: It’s definitely a good time to sit at your laptop in and write, but it’s also a good time to figure out how the publishing industry works. If your goal with writing is to have a book with boards and paper stock and something that’s physical, it’s not as easy as you would think to understand the process of publishing. So learning more about how that whole world works might help writers.

Andrew Keen: When you and I met, I think it was in 2005, we actually met at an event for aspiring authors. At that time, I was a Silicon Valley tech entrepreneur and you were an academic at Oberlin College. Now you’re an independent publisher. How did you set up Belt? What was the process? How did you go from aspiring author to successful publisher?

Anne Trubek: Good question. … So I was an academic. I also had published some books as well. I was really interested in how you publish a book, if you’re the publisher, not just the writer. The whole process of it. So I had this idea of doing basically a quickie book about Cleveland where I live, which was going through a really interesting time, and I wanted to say, hey, let’s get a bunch of people together and write some essays and put out a book, because it’ll be important in terms of what we’re writing about with Cleveland and understanding the city. But also, I want to figure out how you write a book? How you proofread a book, how you design a book, how you market a book, how do you work with printers? I was really interested in understanding all of that.

So I did that with the first book. That was really how the press was born. I also started a magazine at the same time, and then continued to publish books. I was like, hey, this is a lot of jobs I have. Being a professor and being a freelance writer and now running this company. So I stopped doing the academic thing and doubled down on the publishing. And now Belt Publishing is six years old and we have about 12 to 15 titles coming out a year. I understand a little bit more about how you actually make a book into a thing, but I still have a lot to learn.

Anne Trubek is the founder and director of Belt Publishing. She is the editor of Voices From the Rust Belt (Picador 2018), the author of The History and Uncertain Future of Handwriting and A Skeptic’s Guide to Writers’ Houses. Her writing has appeared in The New York Times, The Atlantic, Wired, MIT Technology Review, Smithsonian, Slate, Salon, Belt and numerous other publications. A tenured professor at Oberlin College from 1997-2015, she currently resides in Cleveland, Ohio. 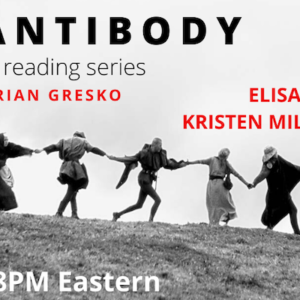 This is episode 18 of The Antibody Reading Series, a weekly reading and Q and A hosted by Brian Gresko. Tonight's...
© LitHub
Back to top