Annalee Newitz is Imagining the Future of Work

Sci-Fi Can be Hopeful, But First It Has to be Realistic

You’ve just snagged a job at a well-known startup, the sort of company that can catalyze your career for years—decades—thanks to its name alone. Mostly, you’re ecstatic. The pay’s good, though the hours aren’t. There’s an unspoken expectation that you’ll usually be on the clock. This is grueling, but the company’s got you covered; as one of its many perks, it provides its workers with free Provigil, free Ritalin.

This is the sort of perniciously toxic workplace that sets off the plot of Annalee Newitz’s first novel, Autonomous—a sci-fi drama that explores the future of work, A.I., big pharma, and gender.

In chapters that alternate perspectives, Newitz introduces us to Jack—a scientist-turned-drug pirate who plunders pharmaceutical trade routes and reverse engineers pricy pills—and Paladin, an A.I. who’s designed for military use, but who, in pursuit of autonomy, winds up discovering the fluidity of her gender and sexual preferences. When Jack muffs up an attempt to recreate a Ritalin-like drug designed to make workers work harder, Paladin is enlisted to track her down. The characters’ journeys lead us through newly populated Arctic cities, through Middle Eastern locales with newly fused cultures, and through Las Vegas, which, due to climate change, has withered into desert.

This may seem like a broad swath of concepts for a single narrative to cover, but Newitz—who founded io9, a Gizmodo Media blog covering sci-fi, futurism, and technology, and currently works as an editor for Ars Technica—was up to the task.

“I just couldn’t let go of my journalist instincts to interview a bunch of experts,” she told me. “Roboticists, neuroscientists, patent experts, economists. I tried to make my world as plausible as possible just based on what we know now.”

Although it was her journalistic and academic background that compelled her to take a research-based approach to writing about the future, she was drawn to fiction writing because of the ways that it differed from her day job.

“I really did it because I wanted to write about characters,” Newitz said. “I wanted to write about people and their motivations, and how those motivations are really clouded by desire and prejudice and preconceptions about the world. It’s really hard to talk about that stuff in science journalism. I mean you can, and some people do. But the kind of science journalism I do, what I’m really interested in, is talking about the discoveries, and talking about the work. So, there’s not really a place in that kind of writing to be like, ‘this scientist has a very weird, ambiguous relationship with her subject matter.’”

Newitz’s job has also exposed her to the less glamorous aspects of research and scientific progress—namely, securing grants for projects that aren’t profit drivers. She was interested in writing not only about buzzy or disruptive discoveries, but also about dwindling science funding.

“I wanted for people in this book to be thinking about how science really gets done,” she continued. “Because in a lot of science-fiction that’s more focused on the adventure, you never hear, ‘Well, Judy didn’t get a grant to develop the warp drive, so, too bad, we just use horses in space now.’ Like, how does Iron Man get his funding? Well, that’s from the private industry, and in fact he’s a defense contractor. And that’s actually weirdly realistic. Except for the part where he installs his own nuclear heart.”

Newitz is interested in the lives of working people in a more quotidian sense, too. Her heroes don’t find themselves on inexplicably paid-for space jaunts; they’re always busy thinking about their work, which is often dangerous or listless or otherwise unfulfilling. Jack’s choice to become a Robin Hood-like drug pirate may be altruistic, but in turn she has to sacrifice her most personal relationships. Paladin, meanwhile, struggles to achieve autonomy—the ability to live and work freely, a status rarely granted to military A.I.

“It’s something that we don’t talk about enough, how much work warps our minds and destroys our emotional lives. And it’s enforced, unless you’re very lucky and rich,” Newitz said. “It’s pretty awful when you think about it. There’s a few lucky people who enjoy their work, but most people don’t. I just think it’s one of the central tragedies of being human.”

Newitz’s view of work is informed in part by living and working in Silicon Valley.

“I know a lot of people who work at startups and big companies like Google, and of course there are a ton of incentives—which are in some ways nice,” she said. “Google will give you breakfast if you get to work early, or give you dinner if you stay late. And some companies will let you sleep there. All of those things sound like perks until you think about the fact that it’s all about just getting you to be at work all the time. I think this is just a huge problem. I think we’re a hop skip and a jump away from companies giving out Provigil at lunch.”

“It’s something that we don’t talk about enough, how much work warps our minds and destroys our emotional lives.”

Newitz’s vision of the future isn’t entirely bleak, however. Those who can afford decent health care benefit from promising medical advancements. And, while gender fluidity hasn’t exactly become the norm, it seems to be considered more openly; the dial’s moved forward, if only slightly. At least that’s the case in Autonomous for Paladin, who, as an A.I. built to fight, hasn’t been programmed with preconceived ideas about gender norms.

“Paladin is hearing all this stuff about gender from humans, and trying to figure out, ‘Wait, how do I fit into this?’ Paladin is feeling all these erotic and romantic feelings, but people seem to keep thinking that gender has something to do with them. Paladin’s like, ‘why would you think that?’” Newitz said. “In some ways Paladin is very human in that he or she is basically using the internet to try to figure out, ‘What is gender?’ And how does it fit into her identity, how does it fit into what he wants to do with other people.”

“It was really fun to be able to put those questions in a different context, so that people could think about them without thinking about gender as humans experience it—just sort of an abstract idea of gender,” she continued. “That’s the goal, I think, with science-fiction: to take these really personal things and make them a little bit more alien.”

This is an approach often used in dystopian novels—a wayward future recontextualizes the issues of the present. But Newitz doesn’t consider Autonomous a dystopian story. It is, she says, an attempt to accurately estimate the future, how individuals will live and love and struggle there.

“I don’t really think of it as a dystopia. I think of it as basically a ‘topia,’” Newitz said. “It’s like today. There are some really great things, there are some really horrible things. And sometimes it’s really hard to pull those apart, and keep the good stuff if you throw away the bad stuff. So with my characters, and the kind of ethical struggles that they’re dealing with, I wanted to capture the way, even when we do something good, sometimes it results in more mixed things happening, even dark things happening. If you’re trying to write something realistic, I do think you have to reflect the way the present is set up. And the present is not utopian or dystopian. It’s both.”

Newitz’s interest in realistic science-fiction also informs her approach to writing about the climate. While climate change isn’t the subject of Autonomous, it looms over each setting, reshaping the cities and lifestyle choices that populate the story. Many of Newitz’s characters are scientists living in a rapidly changing landscape made worse by late-late-late stage capitalism.

When it comes to her journalistic work, Newitz agrees that solution-oriented stories have the potential to be inspiring, and even to catalyze change. But, she thinks imbuing fictional stories with hope can be trickier, and requires more nuance. In this way, Autonomous is distinct from the sci-fi subcategory of techno-optimism, a storytelling approach touted by Neal Stephenson, who champions less defeatist visions of what’s to come.

“I think we definitely need hope in our stories,” she said. “However I think one of the things about hope is that it has to be situated in a realistically ambiguous context. You can’t say, ‘and then we solved everything! Here’s your hope!’ I prefer the hope that you get in my novel—there is a sense of hope, but that hope is part of a world full of loss, and full of hardship, and it’s a hard-won hope. There’s a struggle for it, and there’s always more work to do.”

Octavia Butler: The Brutalities of the Past Are All Around This 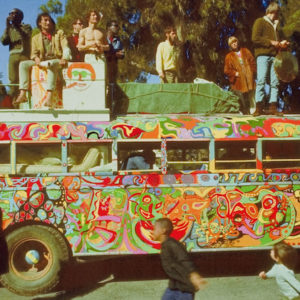 My home life in my teens was claustrophobic, abusive, a horror. Simultaneously, I was not fitting into any group or clique...
© LitHub
Back to top