Murder Most Foul, From the Moors of Northumberland, to the Shetland Islands

Two key events transformed Ann Cleeves’s career from prolific, mid-list author—she’s published a crime novel a year since 1986—to bestselling writer with two concurrent and popular television series based on her books airing on both sides of the Atlantic.

In 2006, Cleeves’s Raven Black, a police procedural set in remote Shetland that was originally intended to be a standalone novel, won the Crime Writers’ Association Duncan Lawrie Dagger for the best crime novel of the year; the prize money of £20,000 spurred Cleeves to quit her day job—she was working at a library in Yorkshire at the time, but has also held jobs as a cook, a probation officer and an auxiliary coastguard—and write full-time. Raven Black’s success prompted her to expand that novel first to a quartet, and then to an ongoing series featuring Shetland Detective Inspector Jimmy Perez.

Several years later, ITV television producer Elaine Collins was poking around her local London charity shop bookshelf, on the hunt for a strong detective character and series to replace television’s popular A Touch of Frost which was winding up its nearly 20-year run. A second-hand copy of Cleeves’s 1999 novel, The Crow Trap, a murder mystery set in North East England’s county of Northumberland—and the first to feature a gruff but brilliant detective named Vera Stanhope—sealed the deal. Vera, the television series starring Brenda Blethyn, aired in 2011; Shetland’s DI Perez hit the small screen in 2013.

Meanwhile, both the Vera and Perez novels continue to proliferate: the seventh Shetland novel, Cold Earth—Cleeves’s 30th—is out in the UK this fall and landing in the US next April, and the seventh Vera novel, The Moth Catcher, is out here October 4. It’s the fourth Vera novel to be published in the US, but Minotaur is rectifying that: the complete Vera backlist—including the seminal Crow Trap—will be rolled out across 2017 and 2018.

Cleeves specializes in crime novels in which bleak, isolated but beautiful landscapes often have a direct impact on the murderous activities of her characters. And she knows of which she speaks: she’s lived in a range of edge-of-the-world outposts starting with Shetland’s Fair Isle where, at 19, she took a job as cook at the Fair Isle Bird Observatory and began a lifelong love affair with Shetland, with the other cooks—“the Sisterhood of Bird Observatory Cooks,” she calls them—with permanent islanders and, perhaps most significantly, with her ornithologist husband, Tim. Other homes have included a summer in the middle of Wales, several years in a village in Northumberland and a four-year stint on Hilbre, a small tidal island near Liverpool, all locations tied to Tim’s bird-focused work. While living on Hilbre, Cleeves went to the University of Liverpool, training to be a probation officer. “We were the only people living there,” she says of the island. “It was a really strange existence where I’d plodge out over the sand and the mud in the morning ahead of the tide in wellies and waterproofs, and then go to university or go and do a placement or go to court, and then come back in the evening.”

But Northumberland and Shetland have proved to be the enduring home-bases: Cleeves and her husband been regular visitors to Shetland since meeting there in 1975, and Whitley Bay, a seaside town on the edge of Northumberland, has been home since 2006.

“For a traditional crime writer like me, Northumberland is dead useful,” Cleeves explains, chatting easily over a cup of tea in her sunlight-filled kitchen. “It’s full of all sorts of different people and very close communities. There are still villages where parents and grandparents and great-grandparents all live within a stone’s throw of each other.” That tradition of crime fiction, for Cleeves, harks back to Agatha Christie and “those small communities where everybody knows each other’s business, the twitching curtains and the secrets.” As such, she gets much of her writerly inspirations from gimlet-eyed observations and unabashed eavesdropping: “You hear all sorts of interesting bits of conversations sitting in the pub. That’s why living here is brilliant because this bit of Northumberland, the South East especially, I think has such a variety of communities. We’ve got the posh bit in Tynemouth and we’ve got Whitley Bay which is very interesting because it has been on the decline for a long time but now new people are coming in. And because the houses are relatively cheap, you get poets and people who are quite community-minded and setting up yoga centers and community gardens, which is quite fun. When I go to the local pub with my husband, the regulars include an anesthetist at the regional hospital, a fisherman who takes a small boat out of Cullercoats, a retired Swan Hunter joiner and our postman, so you get a whole range of not just different communities—the ex-pat villages and the coast and the bonny bits—but you get a whole range of people too, which is what you need if you’re a writer. I don’t know how you could write if you just shut yourself away in a nice part of London and just went to publishers’ parties. How would you do it? You’d have to actually make working-class people up.”

Still, it pays to get around. Part of the impetus for The Moth Catcher, which kicks off with two dead bodies and quickly morphs into an isolated-valley version of a locked-room mystery replete with multiple tantalizing suspects, actually came from a party Cleeves attended a decade ago, packed with well-off retirees. “It’s very hard to retire early with lots of money now. But there was a time just before the crash, when there were lots of people who were suddenly facing redundancy and payoffs and early retirement, who just didn’t know what to do with themselves. There was this sort of manic energy, many of them pretending they were students again, drinking too much and partying and having affairs… It was interesting to see it in action.” Part of that action has translated smoothly onto Moth Catcher’s pages as Vera and her team investigate a group of wealthy retirees, the jokingly self-dubbed “retired hedonists’ club.”

But although ten-year-old revelries can provide initial kernels for her fiction, Cleeves is no manic-planner. In fact, like Raven Black, The Crow Trap was meant as a standalone novel, but Detective Inspector Vera Stanhope burst onto the murder scene and insisted on staying. From her schlumpy wardrobe to her insistent and persistent line of questioning that can ultimately shred the nerves of the most stalwart of suspects, Vera is often recognized as the female counterpart to television’s Lieutenant Columbo. Even Blethyn, who embodies Vera’s grumpy Northumbrian sleuth on PBS’s Vera, appears to channel shades of Peter Falk’s inimitable role with relish. “’Quite a character,” notes one person in The Moth Catcher. “’A bit of a monster, I thought, but clever,’” responds another. “’She makes you think that she’s really stupid, then comes out with a question that surprises you because it’s so perceptive.’”

But Cleeves recalls a much earlier, more personal inspiration. “I think she comes very much from the women that I grew up with,” she says, demonstrating the observational skills that clearly kicked off early on. “I mean, I didn’t think that as I wrote the books—I don’t plot or plan my novels, and I don’t really think very much before I start writing. But looking back, I see something familiar. I was born in the mid-1950s and lived in a very small town in Herefordshire, and there were a lot of formidable spinsters. I think they were that way because they’d lost sweethearts during the war or because they’d come into their own during the war, where suddenly they were allowed to take responsibilities and they didn’t feel that need for a man. It was a generation of strong women. Between the wars there was that expectation that a girl would marry and be a nice housewife, but when I was little, there were lots of single women who had positions of authority, like hospital matrons and head teachers. They seemed very old to me, but they were probably in their early forties. I remember my head teacher, Miss Ward, wearing this dreadful tweed skirt, always the same one with the hem frayed at the bottom and thick stockings and sensible shoes…. It was a generation of very self-contained women. That’s where Vera came from, really.”

As a writer, Cleeves is a completely committed non-plotter: she opened Moth Catcher with one dead body and then thought, “‘No! Wait! I’ll start with two! That will make it interesting!’” But she didn’t know, at the time, what linked them. “I figured that out as I wrote,” she says. “I think if I did plot in advance and it was all, in a sense, quite mechanical once it was plotted, then I wouldn’t see any need in writing the story. And I love that process, the process of sitting there and filling a blank sheet with words that become a story.”

These days, Cleeves happily alternates the Vera and Perez novels, giving herself a bit of a breather. “It’s lovely because after I finish one I’m a bit fed up. So it’s really, really great to start again after a break. It means I can do a Shetland, lose myself in that world for a bit, and then pick right up with Vera for a bit. By then I’m ready for her again.”

For someone who loves the act of storytelling, Cleeves has more than come into her own, with hopefully plenty more of both Vera and Perez on the horizon—though she almost tried to wriggle out of that. “Earlier this year at the Emirates Festival, I did an event with Ian Rankin”—another well-known non-plotter with a longstanding detective series—“and I was saying that, ‘Yeah, I’m thinking I’ll do a couple more Shetlands and then that will be it because by then I’ll have worked out all the ideas.’ And Ian just looked at me, laughed and said, ‘Good luck with that!’” 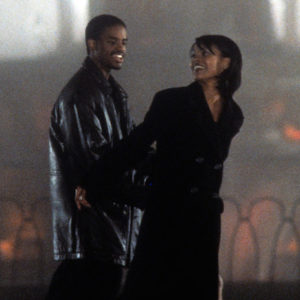 The following essay appears in Issue 07 of Apogee Journal.   PROLOGUE It starts with black bodies in a state...
© LitHub
Back to top