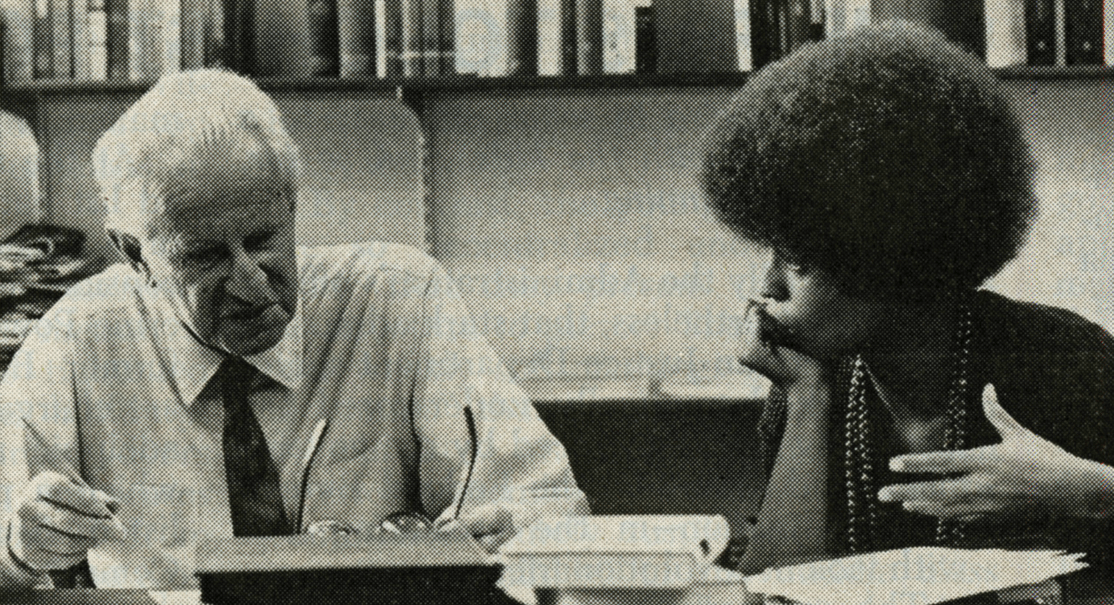 Angela Davis on Protest, 1968, and Her Old Teacher, Herbert Marcuse

As I write in May 2018, in the city of Paris, French students and workers are conducting demonstrations, sit-ins, and occupations with the aim of challenging the Macron government’s harsh attacks on labor and its announced efforts to restrict access to higher education. These protests reflect a growing consciousness of deepening structural inequalities in the Global North—especially for people of color, immigrants from the South, and more generally, poor and working class communities suffering the effects of global capitalism.

As if to accentuate the significance of the publication this year of the graphic biography, Herbert Marcuse, Philosopher of Utopia, these demonstrations in Paris coincide with the 50th anniversary of the 1968 student/worker uprisings, with which his utopian ideas have been historically associated. But serendipitously, Marcuse was in fact in Paris during the 1968 protests, attending, along with Lucien Goldmann and others, a United Nations Educational, Scientific and Cultural Organization (UNESCO) conference on Marx. Students who had occupied the École des Beaux Arts recognized him as he walked back to his hotel from the conference and invited him to speak to the assembly. When he addressed them, he brought greetings from the developing movement in the United States and, according to Andrew Feenberg, who accompanied him, praised the students for their critiques of capitalist consumerism.

In 1968, I was one of Herbert Marcuse’s graduate students at UC San Diego, and we all benefited both from his deep knowledge of European philosophical traditions and from the fearless way he manifested his solidarity with movements challenging military aggression, academic repression, and pervasive racism. Marcuse counseled us always to acknowledge the important differences between the realms of philosophy and political activism, as well as the complex relation between theory and radical social transformation.

At the same time, he never failed to remind us that the most meaningful dimension of philosophy was its utopian element. “When truth cannot be realized within the established social order, it always appears to the latter as mere utopia.” As new generations of scholars and activists ponder the role of intellectuals in shaping radical movements of this era, I believe that Marcuse’s ideas can be as valuable today as they were 50 years ago.

Shortly before the death of his longtime Frankfurt School colleague Theodor W. Adorno, Marcuse urgently debated with him the significance of the student movement. The focal point of their sometime intense exchange was Adorno’s justification of the fact that the police were called in response to a student occupation of the Institute for Social Research. In criticizing this reliance on the police, Marcuse insisted that “if the alternative is the police or left-wing students, then I am with the students. . . . I still believe that our cause . . . is better taken up by the rebellious students than by the police.”

“When truth cannot be realized within the established social order, it always appears to the latter as mere utopia.”

Marcuse pointed out that even as he rejected the “unmediated translation of theory into praxis,” he recognized that theory can be advanced by praxis and that although student activism of that period was neither unfolding within a revolutionary situation, nor even, he insisted, in a “pre-revolutionary one,” it demanded recognition of new possibilities of emancipation. It brought in, he said, some much needed fresh air when the world was suffocating in so many ways. “It is the air that we . . . also want to breathe some day, and it is certainly not the air of the establishment.”

While Marcuse did not always agree with particular tactics of radical movements of that era, he was very clear about the extent to which calls for black liberation, peace, gender justice, and for the restructuring of education represented important emancipatory tendencies of the era and, indeed, helped to push theory in progressive directions. An Essay on Liberation and Counterrevolution and Revolt, as well as his 1974 Stanford University lecture on “Marxism and Feminism,” offers us evidence of his own efforts to engage directly with ideas associated with movements of that period. His reference to “feminist socialism” in the latter essay predicted the important influence of anti-capitalist and anti-racist feminism on many contemporary movements, including prison abolition, campaigns against police violence, and justice for people with disabilities. The explicitly utopian dimension of Marcuse’s thought attracted young intellectuals and activists during the historical conjuncture we associate with the uprisings of 1968.

Fifty years later, as we confront the persisting globalities of slavery and colonialism, along with evolving structures of racial capitalism, Herbert Marcuse’s ideas continue to reveal important lessons. The insistence on imagining emancipatory futures, even under the most desperate of circumstances, remains—Marcuse teaches us—a decisive element of both theory and practice. 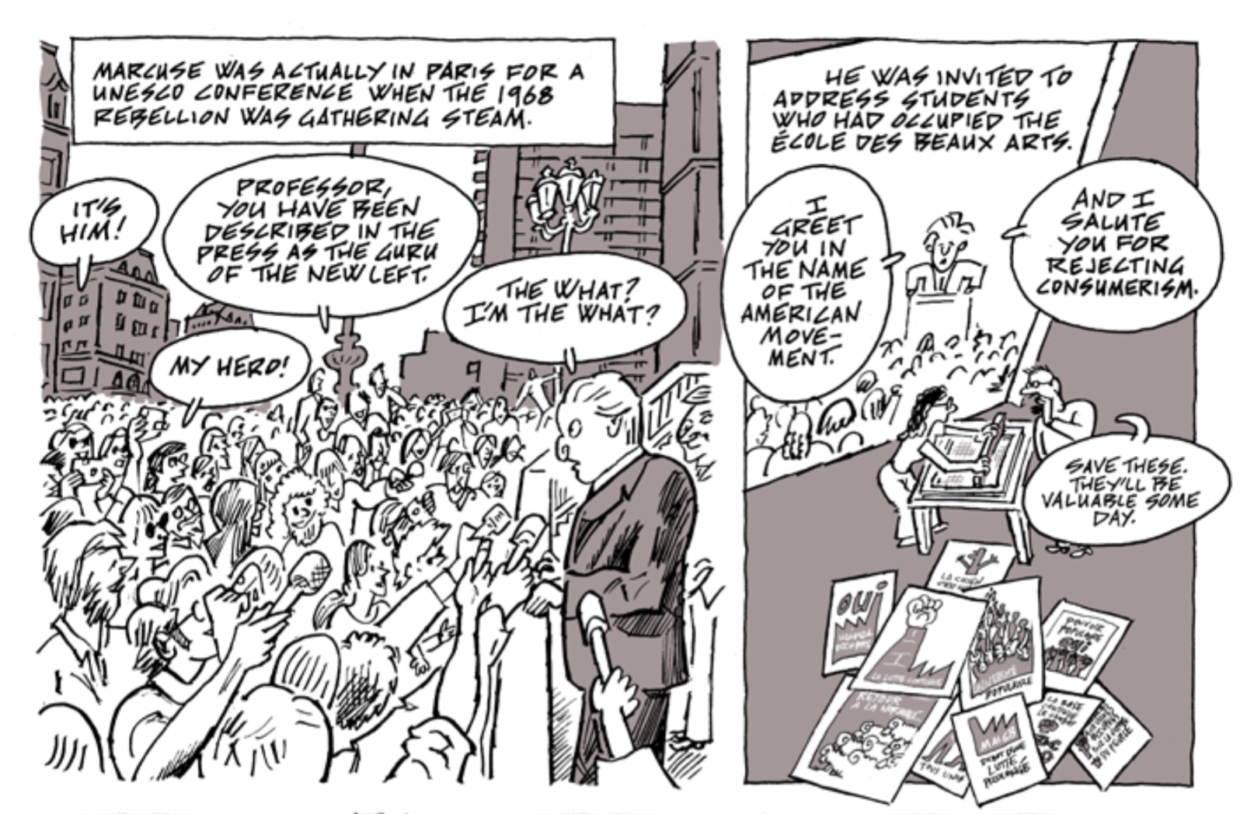 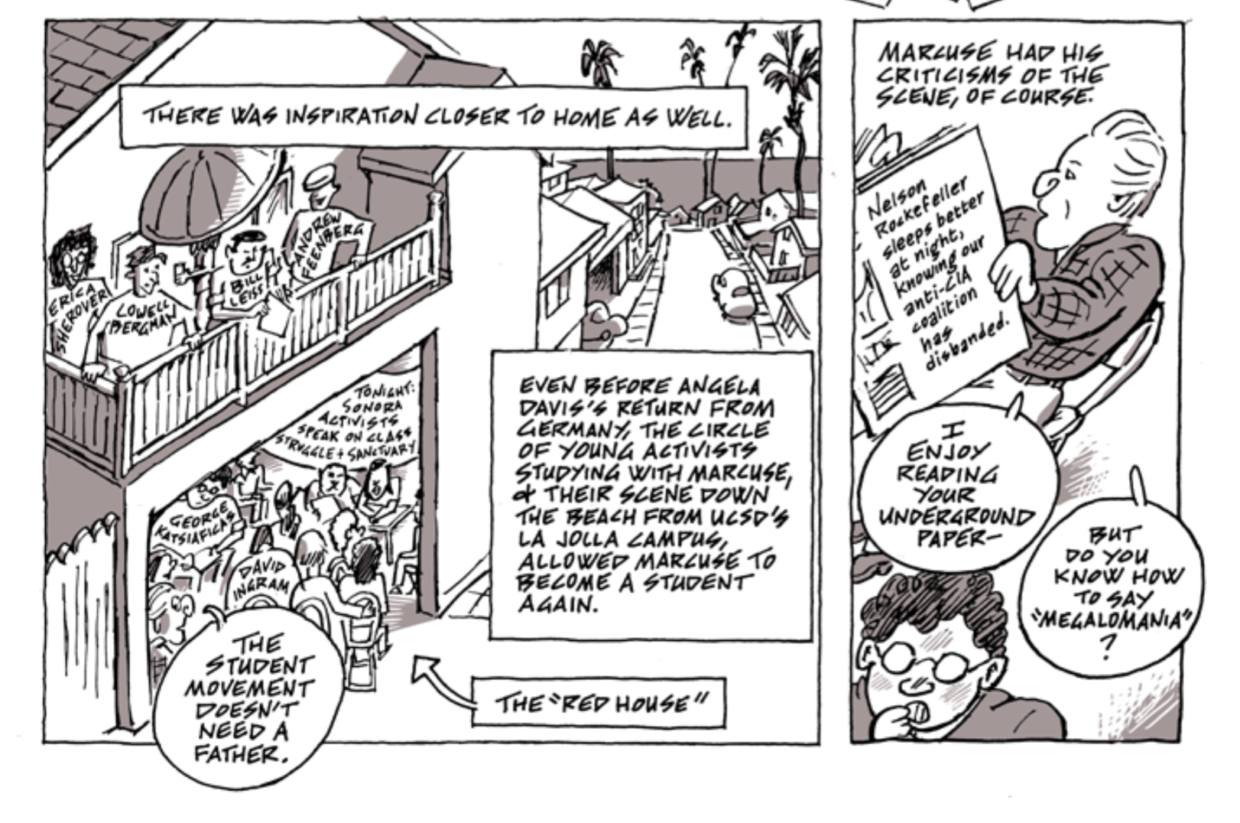 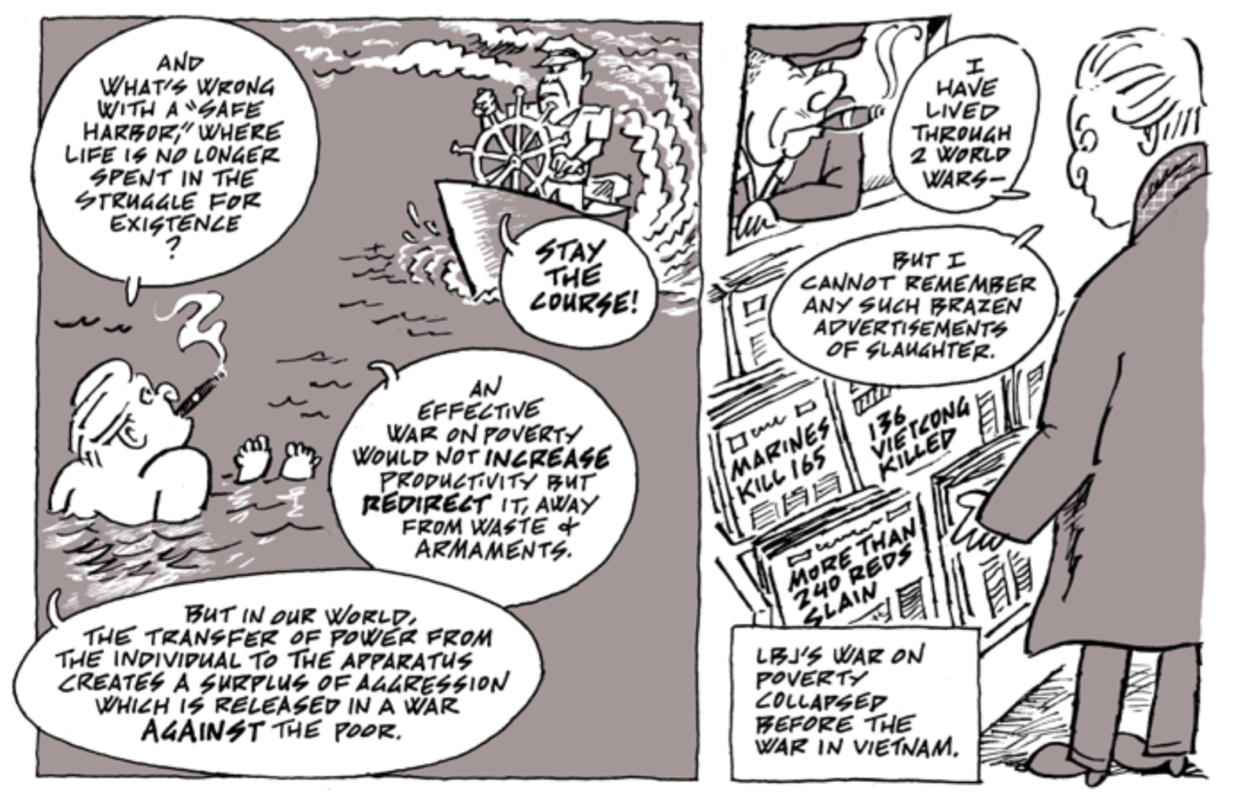 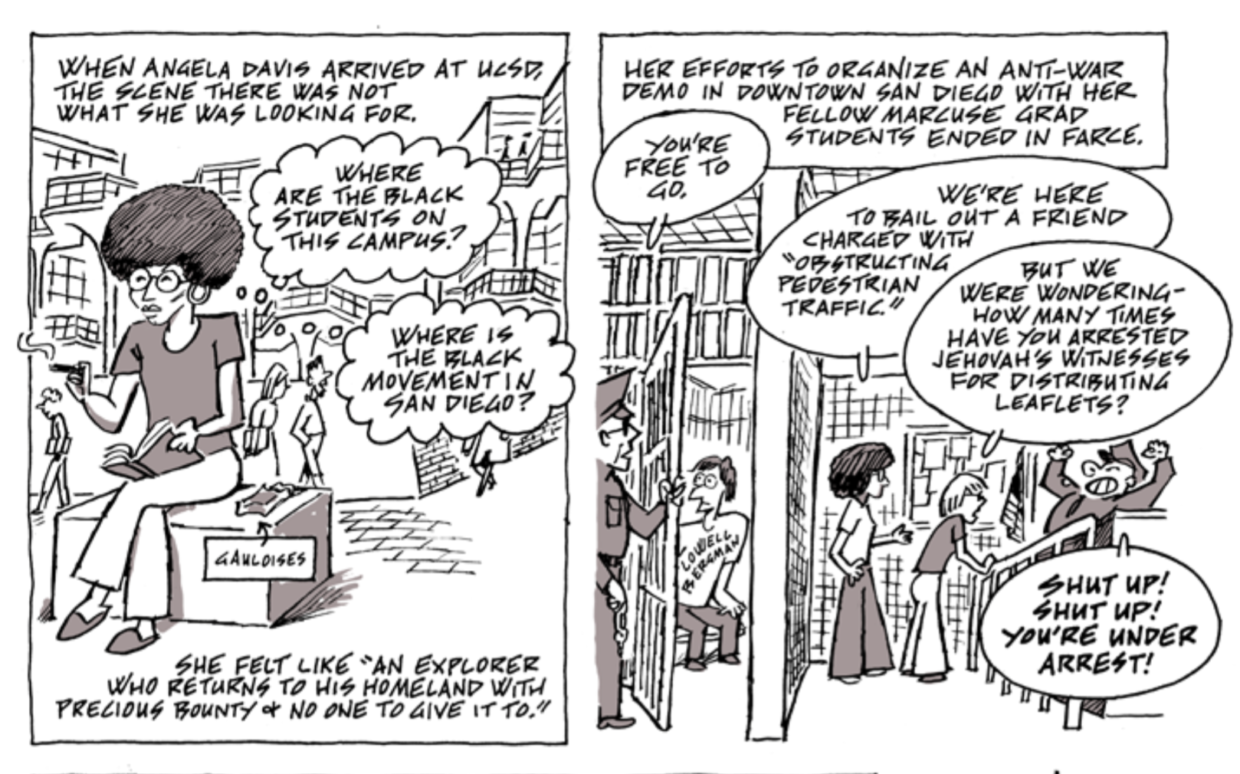 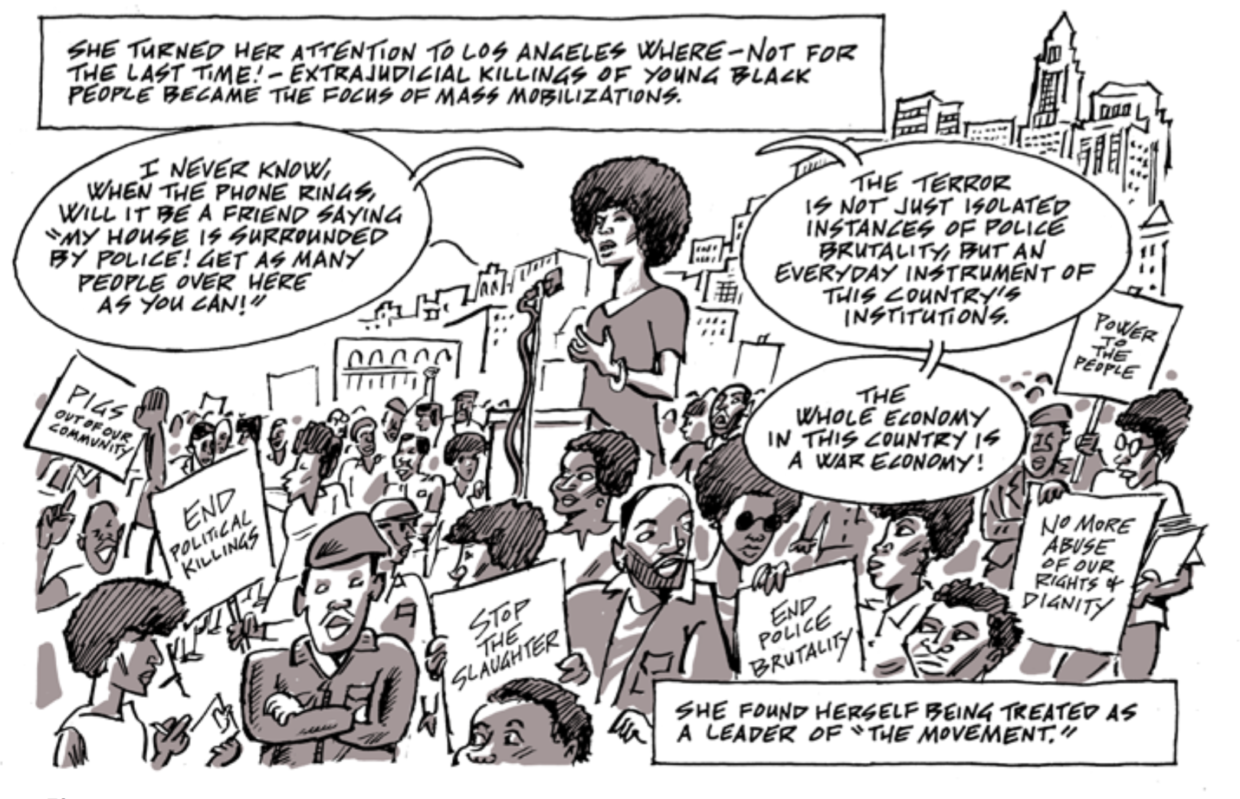 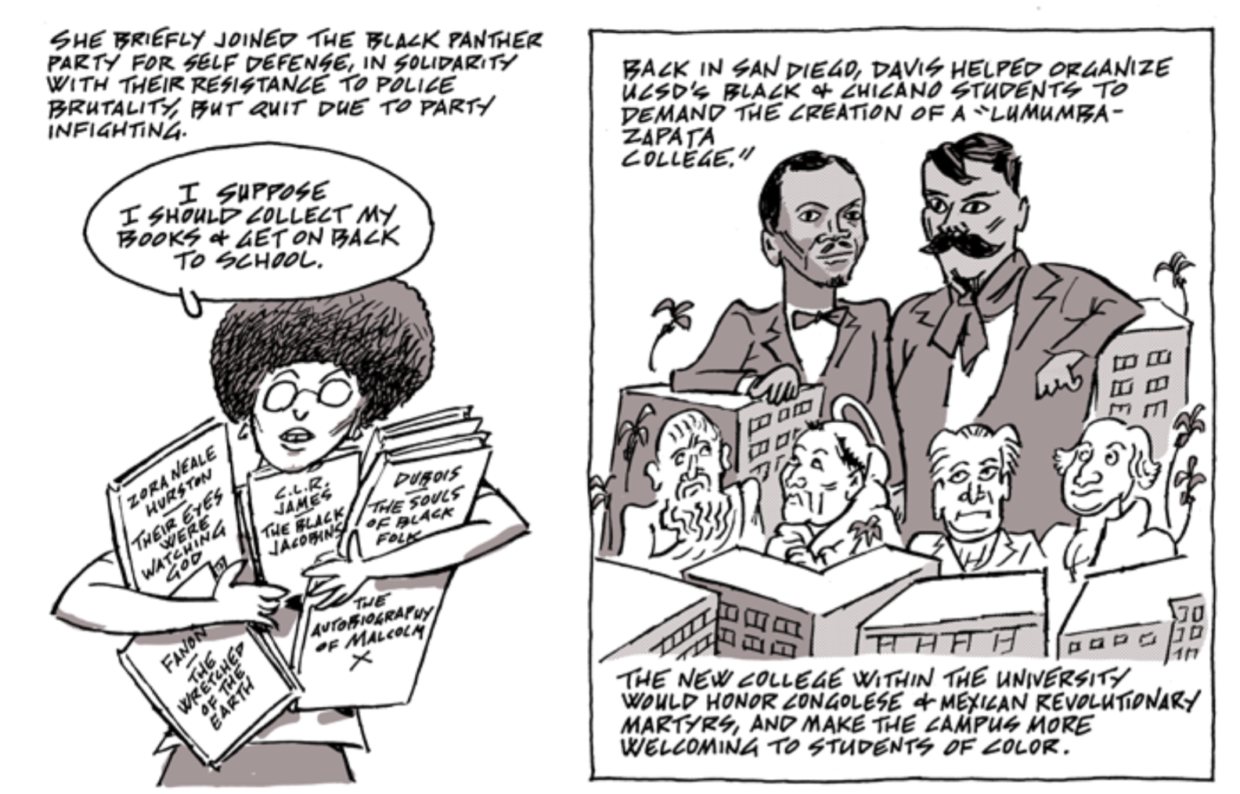 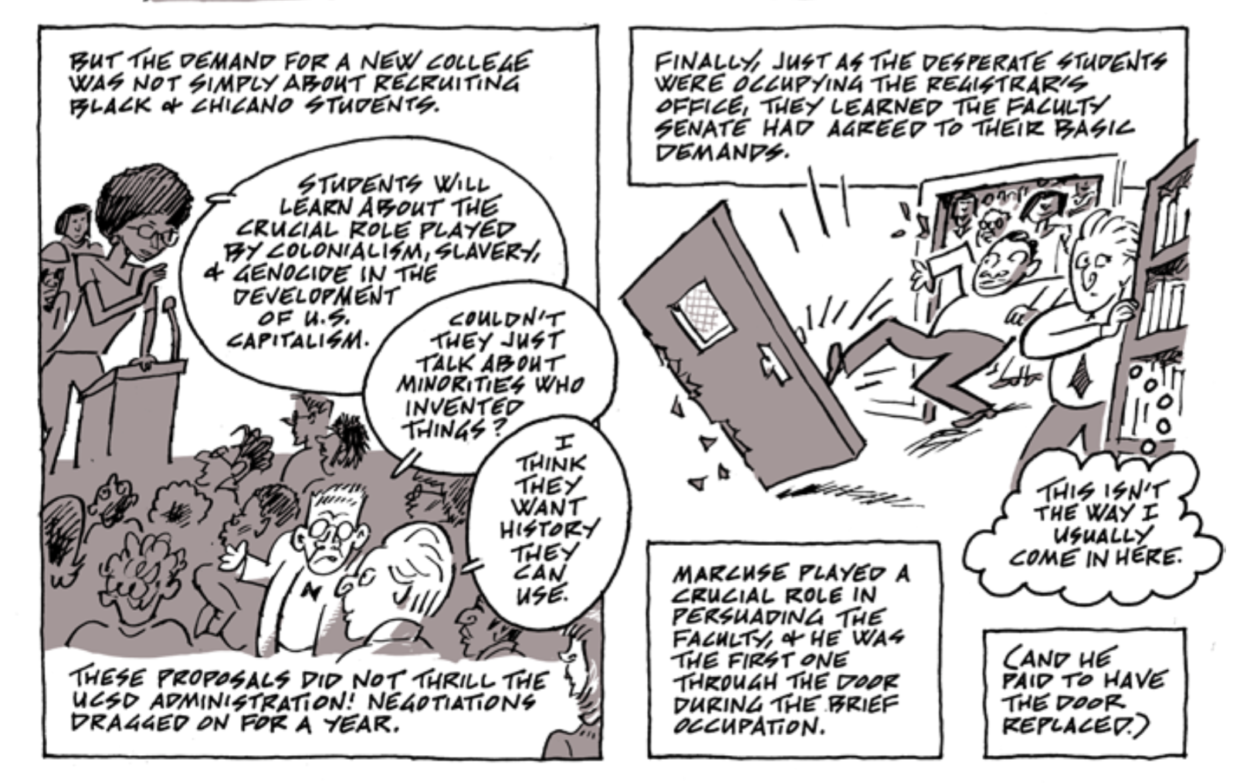 Angela Y. Davis is the Distinguished Professor Emerita in the History of Consciousness and Feminist Studies Departments at the University of California—Santa Cruz. A former student of Herbert Marcuse, she is the author of many books and articles, including Angela Davis: An Autobiography (1974), Women, Race and Class (1981), Blues Legacies and Black Feminism: Gertrude “Ma” Rainey, Bessie Smith, and Billie Holiday (1998), Are Prisons Obsolete? (2003), Abolition Democracy: Beyond Empire, Prisons and Torture (2005), The Meaning of Freedom and other Difficult Dialogues (2012), and Freedom is a Constant Struggle: Ferguson, Palestine, and the Foundations of a Movement (2016). She is a founding member of Critical Resistance, which is dedicated to the dismantling of the prison industrial complex. She is the subject of the acclaimed documentary Free Angela and All Political Prisoners (2012).

Nick Thorkelson is a cartoonist living in Boston. He has done cartoons on local politics for The Boston Globe and in support of organizations working on economic justice, peace, and public health. He is the co-author and/or illustrator of The Earth Belongs to the People, The Underhanded History of the USA, The Legal Rights of Union Stewards, The Comic Strip of Neoliberalism, and Economic Meltdown Funnies, and has contributed to a number of nonfiction comics anthologies. He is working on a graphic novel about the end of the 60s, A Better World Is Possible. Nick also moonlights as a musician, animator, graphic designer, and painter.

Herbert Marcuse (1898-1979) was a little-known German scholar when he became one of the 20th century’s most unlikely pop stars: a celebrity philosopher. In the 1960s, his argument for a “principled utopianism” catalyzed the ideals of a rebellious generation, and Marcuse became an intellectual guide for activists and revolutionaries around the world. The legacy of his contribution to a radical shift of consciousness has resonated in social-change movements ever since. Mentor to a young Angela Davis and often referred to as the unofficial faculty advisor to the New Left, Marcuse’s controversial critique of the “comfortable unfreedoms” of post-WWII capitalism entered popular consciousness with the 1964 publication of One-Dimensional Man, which sold over 100,000 copies in its first years in print. His argument for the possibility of a more humane and sustainable world was grounded in a personal knowledge of the violence of authoritarianism, and the risk of its resurgence. Perennially relevant, radical, and inspiring, Marcuse’s concept of the Great Refusal—”the protest against that which is”—is a guide for our times.

Paul Buhle is the author or editor of more than three-dozen books. Formerly a Senior Lecturer at Brown University, he produces radical comics today. He founded the SDS Journal Radical America and the archive Oral History of the American Left and, with Mari Jo Buhle, is coeditor of the Encyclopedia of the American Left. He lives in Madison, Wisconsin.

Andrew T. Lamas teaches urban studies and critical theory at the University of Pennsylvania, is co-editor of The Great Refusal: Herbert Marcuse and Contemporary Social Movements (Temple University Press, 2017), and serves on the boards of the International Herbert Marcuse Society, the Radical Philosophy Review, and the Bread and Roses Community Fund.

Aging in America: Cherríe Moraga on Her Mother's Struggles

The French Satirist Who Brought Anarchy Into Art 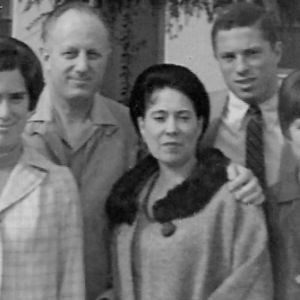 Aging in America: Cherríe Moraga on Her Mother's Struggles There were times in which I did not know whether my mother was truly demented or just Mexican in a white world. I knew she was ill,...
© LitHub
Back to top
Loading Comments...