It’s finally March, which means only one thing—tournament brackets. You know, for sports? But it turns out they’re not only for sports, and for my money, the best bracket going is March Fadness, a 64-team, March-Madness-style tournament of 1990s One Hit Wonders—or as organizer (and writer) Ander Monson described it in an email exchange I had with him this week, “a once-a-year literary magazine/machine for memory.” Last year, the memory machine was called March Sadness—a tournament of college rock—but this year, Monson and his co-host Megan Campbell are taking on the 90s.

Here’s how it works: each song in the bracket will be introduced by a writer—this year there are a host of literary luminaries contributing essays on their favorite 90s OHWs, including Charles Yu, Aimee Nezhukumatathil, J. Robert Lennon, Rick Moody, Kate Bernheimer, Porochista Khakpour, Karyna McGlynn, and Martin Seay—then you, the reader (and the listener) will vote to determine the winner. Said voting can take place either on the website or on the March Fadness twitter.

Games start today, and the first four days alone will bring us Lou Bega vs. Duncan Sheik, Sir Mix-a-Lot vs. Fastball, OMC vs. Marc Cohn, and Divinyls vs. Tal Bachman. Obviously, it’s going to be a riot. (Full methodology for the games here, if you’re interested.)

In discussing last year’s bracket (the aforementioned March Sadness), Monson said the theme suffered a little from the span of time accounted for (1980 to 2001). “Voting,” he wrote, “basically split down generational lines. You voted for whoever was your jam when you were 15. And while cool, that seemed like that was a bad limitation.” Plus, he noted, “because the conditions (re: the market/mass media, etc—what qualifies one for OHW status in 1995 is probably pretty different than 1985) of the decades vary so much, it seemed like apples and oranges.” With March Fadness focusing on the 90s, he said, “we’re more likely to get at something important about the shared culture of that decade.” (And never fear, a March Fadness 80s edition—”March Radness even perhaps,” Monson says—is on the horizon.)

So I asked Monson the obvious question: why do something like this—and why do it with 90s one hit wonders?

“There’s something crucial to me in asking this question this year in particular,” Monson wrote, “because it seems like we don’t really even share a culture anymore; there’s at least two cultures and maybe more as we wrap ourselves in personalized/filtered media. In the 90s we did share a culture. It was often a kinda shitty culture, but it was more omnipresent I think than it is now. Asking ourselves to look closely at our music, at what we listened to intentionally or not (and the OHW focus takes out a bit of the cool/taste quality we were interested in last year, because so many of these are such bad songs; still, they’re fucking OUR bad songs! We chose them or they chose us, and escaping them now would be frankly cowardly), allows us to see both aspects of that larger culture and our roles in it.”

But, he said, “the subject in a way is almost incidental: it’s the act of looking and close reading and hard listening and remembering that is potentially transformational—not just for the essayists but for the reader/voter/listener, whose brain/body/memory is after all the medium of the tournament. That is: we want to play your brain.”

Plus: “there’s a pleasure to be had in writing about seemingly pointless little/disposable things,” he wrote. “Because those things actually reveal a lot more about ourselves than we think.”

And what about the phenomenon of the One Hit Wonder in particular? It’s obvious that there’s something about the OHW—a brief flare in the darkness, to get only mildly misty-eyed about it—that seems to continually capture our collective attention, or at least our collective nostalgia. “The story of most OHWs is essentially tragic,” Monson wrote. “It implies a peak and then an evisceration. I don’t mean to suggest that reading the story of OMC’s “How Bizarre” is Shakespeare, but that there’s an arc and a beauty in it that’s really not all that different.” True enough: all tragedies have a little beauty in them.

I asked Monson to list some of his favorite literary one hit wonders, though we agreed that books, in this case, are not a perfect analogue to songs. “In part,” Monson wrote me, “because there’s not a widespread background culture for books in the way that there is for songs (radio). Books require a lot engagement, so I don’t think they’re the right comparison. One could choose people known best for a short story (except there aren’t many: maybe Mary Gaitskill for the story that got turned into Secretary, but she’s got a hell of a career) or a poem (Allen Ginsberg for “Howl”), but that’s a much harder list to compile.” Gamely, he made a list of some good literary OHWs for me anyway, with some annotations to boot:

John Kennedy Toole, A Confederacy of Dunces
Allen Ginsberg, “Howl”
Joseph Heller, Catch-22
Robert Burton, Anatomy of Melancholy
Eli Siegel, “Hot Afternoons Have Been in Montana,” a spectacularly successful poem published in 1951 that came with a huge backlash, and he then disappeared (there’s an interesting story behind this apparently).
J.D. Salinger is of course usually on a list like this, but I don’t know how fair that is; 9 Stories was also a pretty big deal.
Edgar Lee Masters, Spoon River Anthology—massive, massive, MASSIVE hit now no longer really in the canon or taught or read; it’s a great book however, and he did write some other stuff but I’ve never met anyone who’s read any of them.
Kirsten Bakis, Lives of the Monster Dogs, which came out in the late 90s or early aughts (so far: she’s still working, I hear).
Harper Lee, To Kill a Mockingbird (well she was on the list—and maybe she still is, depending on what you think of the late-life follow-up, whether it was “her” “book” or not.)
Arthur Golden, Memoirs of a Geisha—perfect example of this I think.
Emily Brontë, Wuthering Heights
Jean Toomer, Cain
Margaret Mitchell, Gone with the Wind
Ralph Ellison, Invisible Man
Harriet Beecher Stowe, Uncle Tom’s Cabin
Norman Maclean, A River Runs Through It
*Junot Díaz was for some time, too—years passed waiting for the follow-up to Drown; I mean, dude was on the cover of Time I think!—until he nailed the follow-up and took himself off this list in style.

So in summary: fill out your brackets, place your bets, and consider bringing back that orange bucket hat—March Fadness starts today. 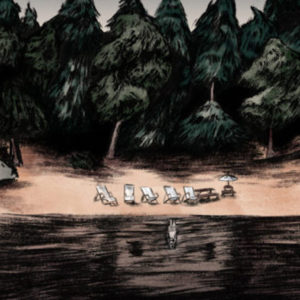 Illustration by Joe Gough. Imagine returning home, after an absence of months, hungry and cold, only to find that someone...
© LitHub
Back to top