An Open Letter to My Mentors: Thank You

Nana Kwame Adjei-Brenyah on Getting From There to Here

There are many of you and you know who you are.

I was born in Queens but I’m from Spring Valley, Rockland County, New York. I say that a lot. Not for no reason, but because where I’m from, being so close to the city where it all happens, at some point early on something gets carved into you: a feeling of almost, but not quite. Almost, almost.

I grew up in libraries and bookstores filled with your pages. Back then, I had no idea who any of you were. I didn’t even know you were possible. I read serial YA and mysteries that always ended with something that felt like justice. I learned to love reading in a way that was easy, casual, a fact of life. There was no status attached. I did not seek the “literary;” I didn’t know what that meant. I still don’t, mostly. I learned to think of books as magical things, born from nowhere, that lived on shelves. I didn’t know you then.

Now I know where the magic comes from. But before I did, I was sure wherever that place was, it was a place I couldn’t be. There’s a mural of great writers on the ceiling of the Barnes & Noble in the Palisades Mall in Rockland County: Ernest Hemingway and Zora Neale Hurston and Charles Dickens and a bunch of others, sitting down to tea. I worked in that mall in a store called Against All Odds (I swear). On my break I’d come to the bookstore and I’d stare at the mural. They looked almost like humans, but to me, they were something more.

I went to a state school I couldn’t afford, feeling poor and inadequate and dumb. You were there. You found me because I found you. I persisted, begged with my eyes for you to help me think that it was possible to be like you. You, who put magic on the shelf. I was terrified, but I found your office and I hoped. You were there, and you gifted me stories and tea and stories and stories. Suddenly I was a literary reader. I took your class, an undergraduate workshop taught by a real author. A magic maker. I wrote bad stories. You told me so, but in a way I could take. A red-drenched manuscript. I learned then that manuscripts obliterated in red ink are a kind of love language. Thank you for teaching me this early on. Thank you for seeing me at all. Thank you for pointing me, with those stories and your kindness to the mentors who’d save me next.

I applied to three graduate programs because I could afford that many application fees. My favorite writer taught at Syracuse and, by the luck wrung of hard work, I got in. It was free, the only price I could pay. I thought: maybe, almost?

Once there, I would lie awake in my tiny Syracuse room, convinced I was a fake. But I went to class. I Googled things in the middle of casual conversations because it seemed all there was to talk about were things I’d never heard of. I was 22 when I got to Syracuse. I was ambition corroding to poison. I kept a smile on my face. If you smile a lot, people think you are happy. You helped give me direction. My first year in the MFA I was met with great kindness. I was afraid, and so I wrote bad stories, almost exclusively. You were able to see them, honor my effort, push me. Thank you. I sat in classes and I kept smiling. I tried. You showed me that you thought I could do something, that I was already doing something. And I needed that. I was a great well of doubt. When screaming ambition meets cold doubt something sad and sharp spikes up. Through specific and kind guidance you reminded me I was just a person trying, and you made me feel like that was enough. “Make a story swerve,” you said. Any story can swerve. I’ll never forget that.

I spent the summer working harder than ever. The next semester, in a workshop, I wrote a story that got guillotined. Murdered. It was bad. But I was still like, damn. That was a lot. Still, even though you made it clear I hadn’t done well, you also said, “but the ending, this ending is pristine.” And I held that word “pristine” close to my chest for a month. I mourned myself, the new improved great writer I had, so briefly, thought I had transformed into that summer. And I got tougher. You said we should love our own voices but not forget to listen to the music around us. I felt wiser. Thank you. You showed me you cared enough to say the hard truth. That same year you gave me a reason. You asked, “What if a story could save the world?”

What does that look like? I wondered. I haven’t stopped since.

Then I had a book. Almost, anyway. But it had twelve different faces; it didn’t know itself. I spent our one-on-one meetings trying to get you to tell me what kind of writer to be. Please just tell me. Tell me what is best. I’ll do it. I swear. I thought as I sat in an office with my favorite author.

“I spent the summer working harder than ever. The next semester, in a workshop, I wrote a story that got guillotined. Murdered. It was bad.”

When I asked overtly if I should err towards realism or the surreal you gently redirected. Be precise, be clear.

When I tried to find your more subtle cues about who you thought I was meant to be, I discovered something incredible: you thought I could do anything. And so I did. Thank you. You showed me that you don’t have to choose; you told me a ghost story is real too.

I say all this because now I teach. Now I have mentees and I want it on record that you all have helped me in far more ways than you know. You taught me to try to make work undeniable, you showed me all the strange ways words could come. And more than teaching you spoke to me not as if I was almost, but as if I was. Like I was already there. Already of consequence. Already whatever it was I hoped to be, or something greater. Thank you.

Now so many of my heroes are colleagues, I think of myself as a teacher as much as anything else. And it is only with teaching and meaningful mentoring that I’m able to feel a completely unmitigated joy. An explosion in my chest that ripples out into my fingertips. I feel it when my students are proud of themselves, when they show me their successes, when they tell me I had some small part in their path toward discovering their artistic self. I love my students and those that call me mentor. I love being a part of a long legacy of love passed down through craft.

And so I work to be a true mentor.  A true mentor listens when a mentee tells them who they hope to be, and a good mentor will do their best to get them there, even as they know on the journey their students will, in all likelihood, become something else, something inherently greater than they’d ever hoped. Their advice and the way they deliver that advice is guided by generosity. A good mentor knows that even though you are trying for something impossible, you are not just almost a writer. You are a writer because you try.

You taught me how to teach with love and, damn, I needed it bad. Thank you.

Nana Kwame Adjei-Brenyah's work has appeared or is forthcoming in numerous publications, including Guernica, Compose: A Journal of Simply Good Writing, Printer’s Row, Gravel, and The Breakwater Review, where he was selected by ZZ Packer as the winner of the 2nd Annual Breakwater Review Fiction Contest. Friday Black is his first book. 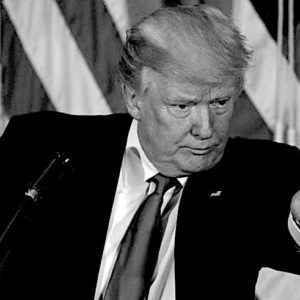 On Tuesday, PEN America, of which I am president, filed suit against President Trump for using his presidential powers to attempt...
© LitHub
Back to top