Greetings. As you must be aware, #DignidadLiteraria is a growing social movement arising in the wake of Flatiron’s publication of ​American Dirt ​and your selection of the title for Oprah’s Book Club. This confluence of events has become a critical inflection point, and an opportunity to hold a national conversation on the state of Latinx literature, representation, and dignity. We are writing you in the context of your book club’s widely-promoted “all sides” discussion on American Dirt in Tucson being recorded on Thursday, February 13th.

As writers whose mission centers narrative justice for our communities, we seek to repair harm done to our collective dignity—and yours. Your representatives participated by phone in our conversation on February 3 with decision-makers from Macmillan, Flatiron, and others. So, you are clearly appraised of the publishing problems we discussed as well as the solutions we suggested. During the meeting, we also suggested that you meet with us. Prior to that, we issued a public statement in which we asked you to use your power and influence in publishing to facilitate a discussion between the only two sides that matter in the wake of the American Dirt fiasco: #DignidadLiteraria and other Latinx groups and the publishing industry that has systematically erased us. That’s why we’ve staged and will continue to mount national actions to bring attention to what we consider a crisis of legitimacy in publishing.

As our meeting with Macmillan, our public statements and other actions clearly illustrate, we and the thousands of Latinx people mobilizing with us have moved beyond Jeanine Cummins and ​American Dirt​ and have instead brought national attention to the real problem: the 60 million voices silenced by a publishing industry unwilling to let us tell our stories.

We just held conversations in 11 US cities about Latinos and the Crisis in US publishing, and we did so in a rational, civil and serious manner. Whomever you’ve decided to invite to your “all-sides” Apple TV discussion, we caution you NOT to play into tried and true narratives of white victimhood that paint Latinx people as a violent, barbarian horde of censorship. Recall Flatiron’s decision to cancel the​ American Dirt​ book tour based on alleged death threats; but as your staff heard on the conference call, Macmillan representatives confirmed that Jeanine Cummins did NOT receive actual death threats. (In fact, some of us involved with #DignidadLiteraria have received—and documented—actual death threats).

Given this situation, we are sending you one last invitation to join us on a mission of repair. We would ask that, at your earliest convenience, we arrange a private sit-down with the co-founders of our movement and representatives of Presente.org. It’s imperative that we discuss the ​actual problem: the continued underrepresentation of Latinx authors in publishing and in your highly influential book club. There are concrete steps that you could take to support literary dignity and equity. We urge you to open your mind and heart to actual Latinos the way you have publicly declared you did to Jeanine’s fictional characters. You or your staff can reach us at ​dignidadliteraria@gmail.com​. We look forward to the conversation.

Thank you for listening.

#DignidadLiteraria is a Twitter hashtag and a grassroots campaign for greater Latino inclusion in the US publishing industry. 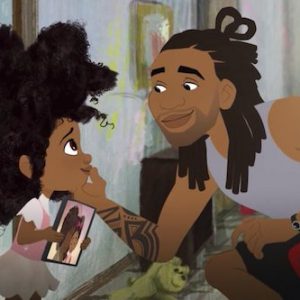 A happy thing on the mid-week internet: Kids celebrating Hair Love. After this week's Oscar win for Karen Rupert Toliver and Matthew A. Cherry's animated short "Hair Love," the story of a young...
© LitHub
Back to top