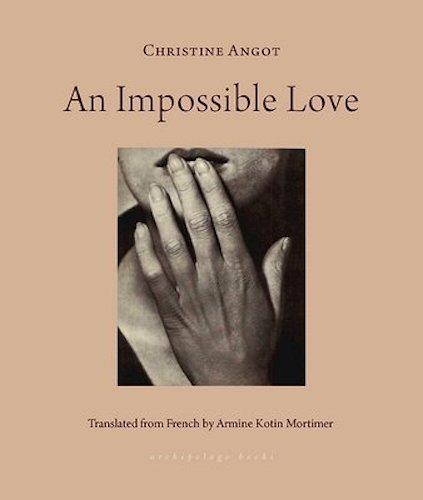 The following is excerpted from Christine Angot's novel, An Impossible Love. Angot has received prizes including the Prix France Culture, the Prix Flore, and the Prix Sade, which she refused on the grounds that the theme of the prize did not correspond to the book she had written. Mortimer is the translator of Philippe Soller and Julia Kristeva's respective works. She was recognized with the Palmes Académiques in 2009.

My father and mother met in Châteauroux near the Avenue de la Gare in the cafeteria she frequented, at twenty-six she had already been with the Sécurité Sociale for several years. She started working at seventeen as a secretary in a garage; he, after lengthy studies, had his first job at thirty. He was a translator at the American base in La Martinerie. Between Châteauroux and Levroux, the Americans had built a housing development on several hectares with little one-story houses surrounded by gardens without fences, in which the families of the military lived. The base had been allocated to the Americans through the Marshall Plan, at the beginning of the fifties. A few trees had been planted, but when you went by on the highway, you could see a multitude of red hip roofs scattered across a broad empty plain. Inside what was really a little village, wide paved streets allowed the inhabitants to travel in their cars, slowly, between the houses and the school, the offices, and the runway at the base. He had been hired there after his military service, he didn’t intend to stay. It was temporary. His father, who was a director at Michelin, wanted to persuade him to work for the Green Guide, but he readily saw himself having a career as a researcher in linguistics or in academics. His family had lived in Paris for generations, in the seventeenth arrondissement, near Parc Monceau; they came from Normandy. In Paris, many had been doctors. They were curious about the world, they had a passion for oysters.

He invited her for coffee. And a few days afterwards for a dance. That evening she was supposed to go to a so-called “social ball” with a girlfriend. Social balls, organized by a group or an association that rented an orchestra and a large hall (distinct from the dance halls frequented by Americans and prostitutes), attracted the young people in Châteauroux. This one took place in a large exposition hall on the Déols highway, Hidien Park. My father didn’t usually attend.

“Oh, I don’t go to that kind of thing…We’ll go out another evening. I’m going to stay home. I have work…”

She went with her friend Nicole and Nicole’s cousin. The evening had already gone on for quite a long time when she saw him in the distance coming through the crowd. He approached their table. He invited her to dance, she got up, she was wearing a white skirt with a wide belt. They made their way toward the dance floor, he smiled as they arrived on the parquet floor, she was ready to slip into his arms, he took her hand to guide her and spin her around among the dancers. At that moment the orchestra began playing the first measures of “Our story is a story of love.”

It was a song you heard everywhere. Dalida had inaugurated it. She would sing it with intensity, mixing the tragic with the banal. Her accent gave a roundness to the words and stretched them out at the same time, her deep voice enveloped the sounds and gave them a particular substance, there was something haunting about the whole thing. Accompanied by the orchestra, the singer imitated Dalida’s original interpretation, the better to heighten the emotion.

All the good all the bad.

They weren’t talking to each other.

The dance floor was crowded, it was a very popular song.

Those who lo-o-ove each other play together, I know

It’s a novel like so many others, which could be yourrrs

It’s the flame that enflames without burning

They were silent during the whole song.

With the hourrr when you embrace, the one when you say farrrewell

With the evenings of anguish and the marrrvelous mornings … And tragic or very deep, it’s the only       storrry in the worrrld That will never end.  It’s  the storrry of a love…

They weren’t looking at each other.

But naïve or very deep, it’s the only storrry in the worrrld,

The song came to an end, they separated. And they went back to their table through the crowd. She introduced Nicole and her cousin to him.

They began to see each other. They went to the movies, to restaurants, to dances, they left town on the weekends, he rented a car and they left. On weekdays he met her at her office when she left work, or he went to her house. Very soon they were seeing each other every day.

She discovered a new world.

A world of intimacy, of constant talking, of questions, of answers, the slightest impression was heartfelt, personal, particular. The unexpected details, the new words. The comparisons: surprising, radically new, contrary, daring. Ideas she had never heard expressed. Airily, he swept aside proprieties. And he described everything he saw, the places they went, the landscapes they walked through, the people they encountered, with such precision that what he said was etched inside her. He explained he had made a choice to be free, he wasn’t criticizing the way others lived, but he had broken away from it. Certain things made him furious, others, which shocked her, made him laugh or moved him. God, whom she had always thought above her, did not exist for him, religion was made for the weak-minded. At the time, this was a subject that mattered.

To be left in peace, it was sufficient to make one or two concessions to society. There was the double advantage of not hurting people and of obtaining from them, when the time came, whatever they could bring you. The ideas that bothered her she put down to his unconventional personality. He would stop in the middle of a walkway, look at her, and emphasize the singularity of her intelligence; he would speak of her like a lover and an expert with the same passion as for an author he admired. As far as he was concerned, the pertinence of what she said had nothing to do with her schooling, which she hadn’t finished. He made a list of educated people who were imbeciles, in spite of their high public positions. So she could profit from his experience, he explained that you have to flatter them, because to live free you have to be alone, and be the only one to know it.

Once, the radio was on, and he suddenly became angry. He criticized what he heard, hostages weeping their eyes out, asking their native countries to save them. He scorned them for valuing their personal interest above the public interest. In general, mass suffering left him cold—volcanic eruptions, earthquakes that caused thousands of human losses, it was all a matter of statistics, it didn’t count as news. It was the first time she had heard that.

He would stare at her without batting an eyelash, until, overcome by her smile, the emotion forced him to close his eyes. She had a sweet smile. But never naïve. Her face was radiant but reserved. Her eyes were lively, green, sparkling, mobile—but fragile, small, worn. He talked to her about her high cheekbones, the frankness of her features, the elegance of her lips, the smile that transformed everything, and her neck, her shoulders, her belly, her legs, the softness of her skin, looking for the word that matched what he saw. He concentrated on the sensation his hands felt when he caressed her. His fingers lingered on a precise area to discover exactly what material the texture of that little zone evoked.

Reading Nietzsche had turned his life upside down. After lovemaking, still lying down, he would read her a few pages. She rested her head in the hollow of his shoulder, her cheek on his chest, she listened. Then they went out, they would go to the Poinçonnet Forest, they walked along the trails holding hands. They’d met at the end of summer.

“How soft your hands are, Rachel, it’s wonderful. They are not just beautiful, they’re velvet. Truly like a fluid.”

“It’s completely new to me. It’s not just the softness of your skin, which is extraordinary. You have a potion, Rachel, I’m sure of it. Like Isolde. You too. You’re making your lover drink a potion, in the hollow of your hands.”

He would slip his fingers into hers like the resting wings of a little bird, sheltering in a sheath. Then: “Wait, Rachel.”

He would pull them out, wiggle them in the air so they would forget the sensation of velvet they had just left. He would walk calmly beside her for several minutes with his hands in his pockets or at his sides, not touching her. Then he would put his hand back in hers, gently, slipping it again into the silky palm, which closed on it without squeezing.

“This moment when I take your hand. This precise moment, this very moment. When I slip my hand into yours. This instant. It’s such a pleasure. Those few seconds. Ahhhh! It’s wonderful.”

He would close his eyes the better to feel, she would laugh. “Hmmm. They’re hot.” She would file her nails into an oval, polish them with an orangey lacquer. Her fingers were long, white, her hands were large and slender, her skin was the color of weak tea, the veins visible.

Excerpt from An Impossible Love by Christine Angot, translated by Armine Kotin Mortimer. Copyright (c) 2021. Reprinted with the permission of the publisher, Archipelago Books.

PRH and S&S call the lawsuit against them “legally, factually, and economically wrong.”

The Korean Vegan Cookbook by Joanne Lee Molinaro, Read by the Author 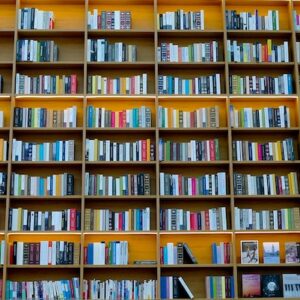 PRH and S&S call the lawsuit against them “legally, factually, and economically wrong.” Last month, the U.S. Department of Justice filed a civil lawsuit to block Penguin Random House’s acquisition of Simon &...
© LitHub
Back to top