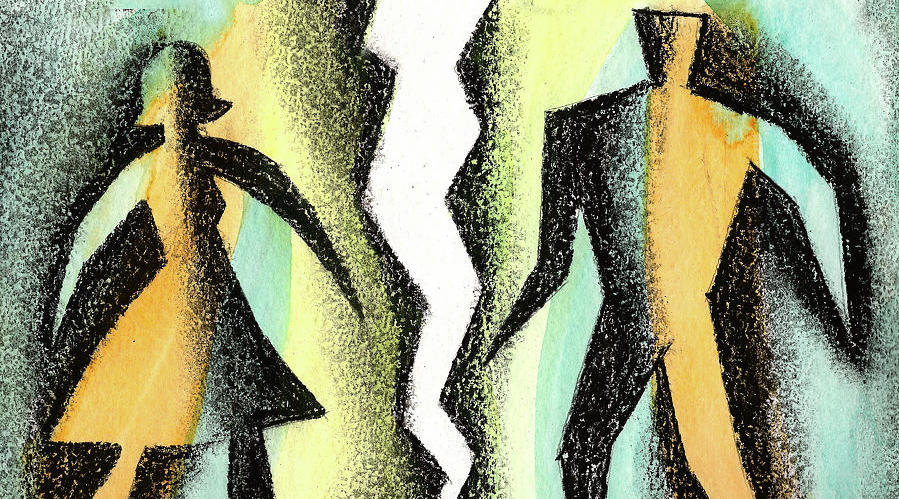 An American Love Story With No Love

Kendra Allen Looks Back at Her Parents' Divorce

In 1995, my mama and her two sisters—my aunts—are outside sharing a joint in the North Dallas projects. Their brother—my uncle—records them with his new camcorder, a piece of equipment that remained attached to his right hand throughout the late 1990s and early 2000s documenting all of our childhoods. We know this because we watch these home videos almost every time we get together.

It’s easy to notice how happy our parents used to be. Now they are just tryna maintain.

On this sweaty day, he zooms in on his sisters; their fingers wrapped around empty beer bottles, their clothes oversized hand-me-downs from one another, a real original girl group. They talk about the past, their adolescences, as my uncle pans to some of us kids who are chasing each other around our parent’s wobbly feet, living out our own youths, our hair half done, our teeth still baby Chiclets, our voices only developed to form phrases instead of real sentences. We say have candy and gotta pee. We hold our hands above our heads when we get tired of using our feet. Our mamas call us their babies when they wipe the dried up juice from the corners of our mouths with their hands.

I don’t see myself in this particular video, but when I see my daddy walk into the frame, I know I’m born. My parents are together. Something that only really happened at the beginning stages of my life. I’m already existing within something, within a union, that in my opinion, should have never existed. I’m at least a couple of weeks old; I’m probably just as new as that camcorder, the smell of Similac still on my breath. I stare at my daddy’s cigarette-stained teeth, a habit he has yet to abolish. He is yelling in my uncle’s direction. They talk about sports, about basketball. His Houston Rockets jersey is on full display, accompanied by a red and white Houston Rockets baseball cap. His face is yellow. He looks like the RCA cables you plug into the back of the TV. If I didn’t know him, I would probably think he was of some Latino lineage.

Compare his complexion to mine; it looks like I don’t belong to him. He complains about Mexican women always tryna holla’ speaking Spanish, and he tells them, I don’t speak that shit. He resents Mexicans because he looks like one. Like me, he might resent a lot of things that remind him of who he is. But he’s ranting into the camera with bleeding eyes as my mama passes him the joint for the third time. He’s saying something about how Dallas ain’t shit compared to muhfuckin Houston. I laugh during this part, at the sincerity behind his statement. You can tell he misses home. He misses his freedom. I interpret this as him reaching out for it whichever way he can.

Yet he has a smile on his face. I’m not sure if his smile is the: I’m so in love with my wife happiness or a depiction of a façade he likes to portray, because this is one of the only times I’ve seen him look like it isn’t hurting him to be a part of this family, my family. Sisters and mamas and nieces and nephews hex his status as a husband. He isn’t the center of my mama’s world. Maybe only a tiny bit of this was showing in this video. Or maybe no one was looking hard enough. But I think this smile, on this particular day, is just the weed that has him all cheesy. Or possibly he is smiling because he and my mama are newlyweds. Newlyweds always smile. Probably because they have a lot of new, married sex they don’t have to feel guilty about. It’s “without sin,” no matter how much we tend to sin in the midst of a pure thing anyway.

As he stands next to my mama, I realize I look just like her: same eyes, same stance, same hair type, all physicality. The camcorder captures the clouds of smoke suffocating them both, taking them under. Reminding me that even with all this, I have more in common with him: my nose, my character, my ego, my rage.

I watch my parents on the screen like they’re an independent film—low budget—not enough nurturing or promotion to ever have a significant success rate. I watch them, together, a rare occurrence. It looks more like fun than love. If it is love I wouldn’t know how to identify it. It looks more like lust and liability. All sex and no emotional development. I know there must be some, somewhere, but I’ve never cared to witness it.

I never watch them with any expectations; I already know their ending. I watch them like a warning.

Almost ten years post their divorce, when I’m fresh out of my teens and teetering on the precipice of young adulthood, my mama makes an announcement at my uncle’s house that she never wanted to be married. That although she was in love, marriage was never the goal for her. I don’t tell her I think marriage shouldn’t be the goal for any two people, instead I ask her why did she stay married when what I really wanted to ask was why didn’t she leave before he did. Somehow everything is always a competition with me, even who leaves who. But I’m asking because I’m hoping she will not say she stayed married because of me.

She says it just seemed like the next step to take because he asked.

I don’t tell her how I’m all for fornication and broken homes and how I think they make independent women seeing as how we’re both products of this recipe. I don’t ask her why she never acknowledged her home would be broken into anyways whether she was married or not. I don’t tell her how this information makes me look at her differently, gives me room to make her decision-making about me.

During the time her marriage was failing/had failed, my mama cried all the time for a long time. She would lock herself in the closet to do so and I’d come knocking on the door, let the wood scrape and burn against my knuckles because I was bored and an only child and needed someone to play with and she was gone too long. I would talk to her through the door thinking she was hiding from me. Sometimes she would answer depending on what I said. Most times she would tell me to go back and watch TV. But I would always come back and knock again until she came out:

mama!
mama!
mama!
mama! in my small,
annoying little kid voice
repeatedly until she cracked
open the door to tell me, once again,
she’d be out in a
minute.

And I would wait,
and she would always come out ready to play.

Later on in my life, she tells me she was praying all those nights.
I don’t tell her how much I used to pray during those times too. Praying for God to take me out the middle of grown folk’s business.

This is what happened: What I’ve been told: Which is what always happens: Your husband begins having sex with a woman who isn’t you and he doesn’t even care enough to hide it well. There is nothing special or innovative about it. It’s nothing more than an American pastime within an American love story with no love and if the love is there it’s based on too many conditions. 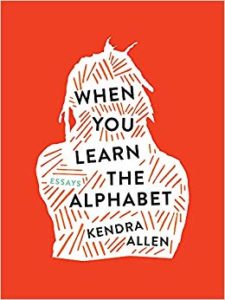 From When You Learn the Alphabet. Used with the permission of the University of Iowa Press. Copyright © 2019 by Kendra Allen.

Kendra Allen was born and raised in Dallas, Texas, and is currently an MFA candidate at the University of Alabama. Her work has been published in Brevity, December Magazine, and the Rumpus. 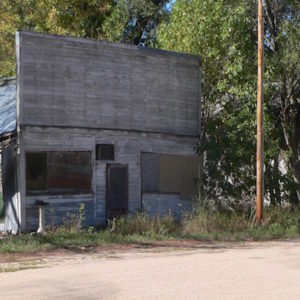 The wind bolted for open doors and whistled through windowpanes. It stole crumpled Powerball slips from the gutters—feed...
© LitHub
Back to top
Loading Comments...