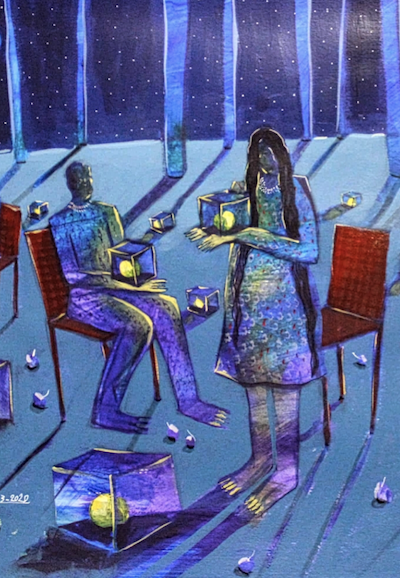 The following is Zeinab Belail's short story, "Al-Nar Street" (trans. Nesrin Amin), excerpted from the latest issue of Words Without Borders. Belail has published five novels since 1984, including her third and most critically acclaimed novel Nabat Al-Sabbar (The Cactus Plant), which won the Sudanese Martyr Al-Zubair Muhammad Salih Prize. Amin is a translator based in Cambridge, UK, where she works at Cambridge Assessment as an assessment manager.

Al-Nar Street is one of the longest streets that any of the city’s residents has ever set foot in. Long and winding, it starts in the east and ends in the west, as if rising and setting with the sun. On its banks are clay houses with small doors, small windows, and tight spaces. Their inhabitants therefore spend most of their time in the street, despite the sewage pumped into it. The houses extend along the street for around half a kilometer on each side. To the north, they are contained by the moringa trees, which keep the dust out of the Illuminated City with its high-rise buildings, paved roads, and lush gardens. And then there’s the large open space, wider than the row of houses, a space flooded by searchlights. Not even a mouse could cross it undetected.

To the south, the houses are contained by a deep canal leading away from the big river and to a place unknown to the residents. Perhaps it was originally dug to irrigate this land, but then someone changed their mind and it was abandoned, left dry, for the residents of the street to do their business and dispose of their waste. In the rainy season, it fills with water and debris. Goats drink from it and young boys learn to swim in it. Beyond this stream is a vast pit from which truck drivers obtain sand to sell for house construction. In autumn, these pits turn into swamps—a haven for mosquitoes. Scattered around this area are dense mesquite trees where stray dogs and cats seek refuge, as do young delinquents. At night these trees serve as a veil behind which some drink alcohol, thieves split their loot, and criminals fight, kill, and bury their victims in shallow graves. Often, police officers come here to dig up bodies, and the stench rises to the residents’ noses.

Women are forbidden from setting foot in the swamp, by day or by night. If a woman crosses the canal, if only to dispose of some garbage, everyone’s tongues would wag and stories would be spun about her. A powerful reason prevents the women from crossing the canal, where garbage, bricks, mud and animal carcasses have created a multitude of bridges. That reason is the demons who come in the shape of handsome men in clean clothes; they tempt women and then have their way with them. Everyone remembers the strange thing that Fathia bint Al-Khayyat gave birth to, and which Al-Hussain delivered them of in the non-place. And although men have forbidden their wives from crossing the canal, the demons have continued to come to the swamp, now bringing along their own women, to procreate in this filthy piece of land. The residents believe that the demons prefer filthy, squalid places. Every day, when the men cross the canal to the swamp for whatever reason, they find objects belonging to women—the djinns’ women of course—an earring, a bracelet, an item of clothing, or a shoe. They remain on guard, and tread carefully for fear that they may step on one of the demons’ offspring and be paralyzed.

The houses in Al-Nar street are attached. Neighbors can hear each other whisper. They exchange greetings, swear words, food, and buckets of water over the walls. Bathrooms are common property. A homeowner may walk into the bathroom only to find a neighbor using it, and there would be no embarrassment or anger. Water pipes are common property as well, and one child’s medicine is shared by all children. In fact, any person’s medicine may be used by anyone with similar symptoms.

Leafy neem trees line the street providing shade; children use them as playgrounds, men as their social clubs, and barbers as their salons. Some sections of the shaded cover have been taken over by the makers of woven anaqrib beds and banaber stools. Arguments are always breaking out between the carpenters and women who accuse them of reserving the good quality wood for the pretty women, or for women with whom they have other special arrangements.

To the south, the houses are contained by a deep canal leading away from the big river and to a place unknown to the residents.

Some tailors have also made use of the neem trees, but ladies’ tailors have separate shops to protect their customers from the prying eyes of the men passing by with sacks of coal. The spaces beneath some branches have turned into a market for cigarettes and snuff, while elsewhere they are used as workshops for mending tattered shoes. Wise men, sand readers, and palm readers have occupied spots in the shade, as have the sellers of roots—aphrodisiac roots, roots for incurable diseases, and roots that increase wealth. Some areas are reserved for the display of multicolored, decorated pottery. People come to Al-Nar Street from far and wide to buy things they cannot find anywhere else.

In the evening, women sell food along the length of the street, and men stand in circles around them to eat in the light of the kerosene lamp. The street heaves with the masses of people escaping from their stuffy, overcrowded houses. To an onlooker from above this extraordinary river looks like a mythical ship carrying people with unlit torches.

In the last third of the night, the whole street awakes. The head of the household starts by removing the branch supporting the external door, causing it to collapse. All men and boys over seven, and a few under seven, leave the house and greet one another as they meet on the street. With one hand holding up their jilbab to keep it from dragging in the mud, and the other clutching the misbaha beads, they head toward the mosque built by a benefactor they’ve never met. They feel their way in the dark, following the light of handheld flashlights and recognizing each other from their voices or the houses they were coming from. Everyone is muttering prayers, rushing along before it’s too late.

At the end of the second third of the night God descends from the seventh heaven, roaming the Earth and calling on his worshippers: “Is there anyone who is seeking my help so that I may help him? Is there anyone who was wronged so that I may restore his rights? Is there anyone who is invoking me so that I may respond to his invocation?” Then God returns to the seventh heaven and its boundless spaces. The worshippers’ voices cannot reach such lofty heights, and that is why they rush, in the hope that God will hear their prayers and answer them. In the meantime, while God is roaming the Earth, the women heat skillets, cook food, or milk sheep. They do not have the time to stop and listen to the call of God. They hurry toward the markets. The tea-selling women move swift as the wind. In only a few moments the men will come out of the mosque to buy tea from them. Some of these men have no milk at home, others have wives who are too busy preparing the goods to sell in the market, while yet others do not like to start the day with the sight of their wives: what with their messy hair and dirty, ragged gowns, or the sound of their angry, nagging voices, so unlike the well-groomed tea sellers who greet each customer with a special, bright morning smile. Men drink their tea with milk, with cinnamon, with clove, with mint, with sweet dumplings; tea that is unlike any other tea. It quenches their thirst and cures ailments only they know of. Accompanied by kind and gentle words, this tea is so very different from their wives’ tea, which always lacks flavor, no matter how perfect it is.

From Nabat Al-Sabbar. © Zeinab Belail. By arrangement with the author. Translation © 2020 by Nesrin Amin. All rights reserved.

A House at the Bottom of a Lake by Josh Malerman, Read by Taylor Meskimen and Ozzie Rodriguez 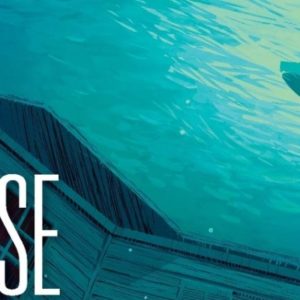 A House at the Bottom of a Lake by Josh Malerman, Read by Taylor Meskimen and Ozzie Rodriguez Every Monday through Friday, AudioFile’s editors recommend the best in audiobook listening. We keep our daily episodes...
© LitHub
Back to top