According to the anonymous ancient Greek work Tractatus De Mulieribus, the Galatian people were saved from hardship and starvation by a woman named Onomaris. The women of her tribe had asked the male elders to bring them to a place where they could provide for their families and offered to swear allegiance to anyone who would lead them; because of indecisiveness or fear of the unknown, no man would step forward. Onomaris then rose to speak, and in no time at all, the whole tribe was behind her.

The first thing Onomaris did was to reorganize her people. There would be no wealthy or privileged among them. Everyone brought forward what few goods they possessed and placed them in a common pool for redistribution. She gave each family only the supply of food, animals, and weapons they needed for the journey, and the tribe then set out north across the Danube River in search of a new home. Although they only wanted land on which to settle and raise their children, they were determined to overcome anyone who stood in their way. Just as Onomaris led the column of emigrants through forests and swamps, she led them in battle against hostile natives. Eventually, the tribe arrived in a peaceful and prosperous land where she ruled with strength and wisdom.

These few details constitute the earliest representation of a Celtic woman found in historical records. And there could hardly be a more appropriate beginning to the long list of women who would cross the stage of history than the courageous, intelligent, and determined Onomaris. Throughout ancient sources, Celtic women are depicted as every bit equal—and often superior—to men, in times of war and peace alike.

The largely unknown stories of Celtic mythology from medieval times—whether from Ireland, Wales, or elsewhere—grew from these ancient traditions. Not everything in these tales can be taken as historical by any means, but they reveal a world in which women were war leaders, druid priests, poets, lovers, and the mothers of their people. One of the four great cycles of Irish mythology, the Ulster Cycle, speaks of women training young warriors like the great hero Cú Chulainn. They also celebrate Queen Medb of Connacht, who led armies and loved freely. After she left the king of Ulster, Conchobar mac Nessa, Medb insisted on choosing a husband who was without jealousy. She married a prince named Ailill, a fearless warrior who had no objection when she offered others “the friendship of her thighs.” But she didn’t use her sexuality simply for her own pleasure. When she was leading her army into enemy lands, she rewarded those of her men who fought well against her foes with a night in her bed.

The Ulster Cycle also tells of the Irish maiden Deirdre, who was so stunningly beautiful that the druids and warriors of her tribe wanted to kill her to prevent a battle over her; Conchobar, however, hid her away for himself. Deirdre wanted nothing to do with the elderly ruler and fell in love instead with a young man named Noíse. Instead of riches and luxury at the royal court of Conchobar, she chose a life of hardship and exile with her beloved. They fled to Britain, only to be hunted across the lands by the king and his men. Eventually, Conchobar tricked Noíse and Deirdre into returning home and murdered the young man, forcing Deirdre to be his bride. But instead of yielding to him, she leapt from a chariot and smashed her head on a rock, choosing death over submission to a man.

Welsh stories from Britain also reveal a Celtic heritage of strong and capable women. In the first part of the Welsh epic cycle known as the Mabinogi, a mysterious woman named Rhiannon rides past the young king Pwyll each day on a magical horse, but he is never able to catch her. Finally, he shouts out to her in frustration and asks her to stop. She curtly responds that he should have simply talked to her in the first place rather than wasting her time trying to impress her. But she eventually falls in love with Pwyll and agrees to marry him if he can overcome the plots of a rival suitor whom she scorns—though she has to help Pwyll every step of the way. Throughout the stories, Rhiannon continually uses her wits and courage to solve problems the men in her life are unwilling or unable to handle.

The coming of Christianity to Britain and Ireland didn’t diminish the role of women in Celtic mythology. In the years just after Saint Patrick, the Irish Saint Brigid—herself a blending of an ancient Celtic goddess and a real Christian woman—is said to have established and protected a monastery where men and women lived together as equals. She had a particular concern for women suffering in a male-dominated world. She helped, among many others, a young woman threatened with sexual slavery by a powerful nobleman. She also healed a girl who had been mute from birth and welcomed her into monastery. In one final story—later removed from many manuscripts by offended church leaders—she miraculously caused the fetus inside a wayward nun to disappear, restoring her virginity and her place in the community.

From Onomaris to Brigid, the women of Celtic stories are brave, wise, and fully capable of handling themselves in a world of men. It’s no wonder these ancient and fascinating tales, long relegated to the realm of scholars, are becoming better known to modern readers from around the world

Philip Freeman graduated with a BA in Classics from the University of Texas and earned the first joint Ph.D. in Classics and Celtic Studies at Harvard University. He has been a college professor for 20 years teaching classical and Celtic mythology. He is the author of 18 books and currently hold the Orlando W. Qualley Chair in Classics at Luther College in Decorah, Iowa.

Rarely Seen Literary Treasures from the Library of Congress Archives 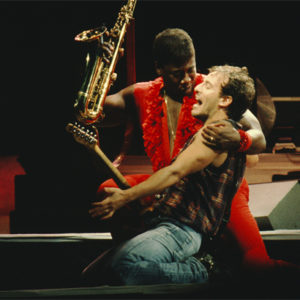 They always said, “You gotta see Bruce live; then you’ll understand.” My friends were early birds: bigtime fans who urgently...
© LitHub
Back to top