On the Very Contemporary Importance of a Great American Poet

Dan Chiasson: Well, here’s what’s new these days with Lowell: I can teach Lowell, confidently, and my students are moved by Lowell more readily than they have been in a long time.

DC: Well, Kay Jamison’s book. One of the great virtues of this book is that it brings to light just how severe, how desperate his bipolar disorder was. Students, after all, don’t automatically take to an aristocratic white man who in some ways saw himself as emblematic or representative of the whole nation, but when you really look at the work through this new lens, you see that he was first and foremost a sufferer, a profound sufferer. There’s an element of courage just in putting pen to paper for him.

Now, I have this book that I can refer to, that I can quote, and it’s really helpful in just characterizing him as a human who wasn’t always imperious and always entitled and always privileged.

CL: He’s risen above his aristocracy, in a sense.

DC: Yes! Or below. I don’t know. Absolutely. He was a figure of great, intellectual and moral and imaginative courage. He took the fluctuations and ups and downs of his own mind as his subject. Hopkins says, “The mind has mountains,” and he’s the great mental mountain climber.

CL: I read him through Kay Jamison’s book, and thought this is the ultimate Boston story, and it goes back to the Mayflower. It’s full of the glories of the 19th-century Brahmin-ocracy and then its collapse in the 20th century. It encompasses everything.

DC: Yeah, and he’s the last man standing. He’s the designated mourner for Brahmin culture in Boston, and it makes him so mordant and, in some ways, a very darkly funny writer: the kind of ironies of circumstance growing up in the decline of being on the wrong side of Beacon Hill still surrounded by the trappings of Boston aristocracy. But it really couldn’t be capitalized on in the same way that it had been in generations prior.

CL: And then he finds himself at McLean among the—what did you call them?

CL: Yeah, but also the other piece of it is his incredible ambition. He wants to be John Milton, if not Dante.

DC: Absolutely. You know, he writes a letter when he’s 19 years old from Wigglesworth Hall at Harvard to Ezra Pound in Italy asking to come and study with Ezra Pound and going on and on about how he prefers the religion of the ancient Greeks to his parents’ Episcopalianism.

CL: Forgive me, but the Boston angle that’s Ted Williams at 19 saying, “All I want is when I go down the street for people say, ‘That’s the greatest hitter that ever lived.’”

DC: That’s Lowell, absolutely. That’s the essence of Lowell, and it’s stirring to be in the presence of that kind of ambition on the page. You mentioned Milton, and Milton comes to mind right away, particularly in the early verse which is so learned and allegorical. There are these poems about Boston where Boston is really just a landscape full of symbols, and he also has the misfortune of being in and out of hospitals almost his entire life. So, from the age of 38 on he was institutionalized regularly. I mean, there were very few periods in his life with his wife Elizabeth Hardwick when they weren’t in some kind of trouble.

So, I do think that he is grieving not only the decline of his race or class but also for his own early hopes, ambitions. Starting out he didn’t know that his life was going to take this terrifically torturous, kind of cyclical, path.

CL: Maybe he did?

DC: Well, that also comes out of the biography, which begins with a very vivid story about his ancestor Harriet Lowell being committed to McLean’s, which was in Somerville at the time. And it turns out that when Lowell looks at his own family’s past—but even just the past of the region—he’s looking everywhere for signs of bipolar disorder. He finds traces of his own condition in Percival Lowell, his ancestor who discovered Pluto or had a hand in discovering Pluto. His own mother had periods that Jamison suggests were manic. She, at one point, tried to imitate the habits of Napoleon, bathing in the same way, being totally obsessed by Napoleon. There’s a lot of suicide. There’s a lot of institutionalization in Lowell’s past.

CL: I love your line about history meeting heredity.

DC: Yeah, that’s right. He was looking for clues as to why he was the way he was. He’s a great prose writer too. He has great, impressionistic essays about particularly New England writers, and he’s looking for the same kind of material in every one. Hawthorne, for example, he’s interested in the way he managed to be a family man even in the winds of his terrible black moods, and he loved Henry Adams—who’s one of the great depressives in American literature, maybe any literature.

CL: He’s looking for models including how did other people—going back to Homer or Alexander the Great—how did they deal with my confusion?

DC: In a way, he assembles for himself a kind of ancestry, not only his own blood ancestry but his imagination’s ancestry.

DC: Yes, that’s right, and Lowell actually came very close to power in many cases. He campaigned with Eugene McCarthy. He has beautiful elegies for Bobby Kennedy, for example. I mean, there was not much electable about Robert Lowell, but there was the thrill of being close to power. After John Kennedy was murdered he was seen places and taken places by Jacqueline Kennedy, which has to be the greatest thing that ever happened to a poet, I think.

CL: You know, other poets would write a letter to the newspaper about wars they didn’t like. He wrote personal letters to the president of the United States: Roosevelt in ‘43, Lyndon Johnson in ‘67.

DC: And when he was jailed as a C.O. during World War II, I believe it appeared on the front page of The New York Times. Not The Boston Globe, The New York Times, and he was in Life magazine. He was as famous as any American poet has ever been maybe.

CL: When you look at the poetry today, Dan Chiasson, what jumps out?

DC: Today being this absolute current moment in history and time and space where I’m so preoccupied with my own grief over the country and the direction it seems to be headed in, what I find is that he brought this extraordinary, troubled, self-reflective mind to bear thinking about politics, thinking about civics, and he loved history his whole life. You know, he memorized the names of all of Napoleon’s generals when he was eight years old or something so he can bring all of it up to bear on the contemporary scene.

I think he shows us how an American personal life can be a nexus of political trouble, political energy, political engagement. He had an omnivorous, rapid mind so that he often wrote very soon after the moment, if not in the moment.

CL: What is that civic poet saying to us in his work but also in his memory?

DC: Well, for example “For the Union Dead” is one of the great statements about how not far we’d come since the end of the Civil War. It’s probably the great poem about the Civil War from the Union side but also about the civil rights struggle. So, he just gives voice to all of these matters of civic and communal and popular concern, which is unusual for poets.

Here in my study, in its listlessness
of Vacancy, some old Victorian house,
air-tight and sheeted for old summers,
far from the hornet yatter of the bond–
is loneliness, a thin smoke thread of vital
air. What can I catch you now on?
Doom was woven in your nerves, your shirt,
woven in the great clan; they too were loyal,
you too were more than loyal to them… to death.
For them, like a prince, you daily left your tower
to walk through dirt in your best cloth. Here now,
alone, in my Plutarchan bubble, I miss
you, you out of Plutarch, made by hand–
forever approaching our maturity. 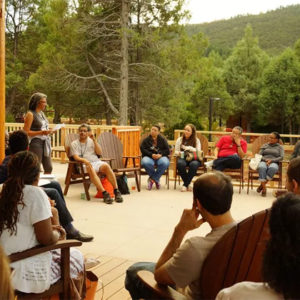 As part of the socially conscious Dallas literary scene, I have worked toward creating a space for African American writers...
© LitHub
Back to top