A Suitable Companion for the End of Your Life 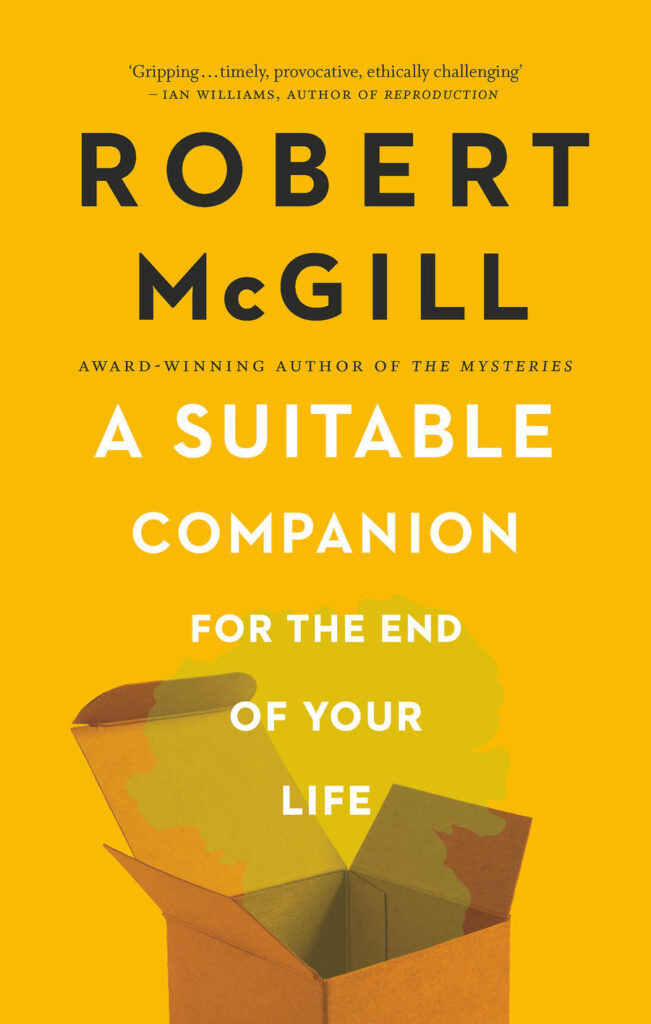 The following is from Robert McGill's novel A Suitable Companion for the End of Your Life. McGill’s writing has appeared in magazines including The Atlantic, The Dublin Review, Hazlitt, and The Walrus. He teaches at the University of Toronto. His previous books include two novels, The Mysteries and Once We Had a Country, and two nonfiction books, The Treacherous Imagination and War Is Here.

Regan decided that living wasn’t for her, maybe. There was no Hail Mary left or last ditch, just misery on misery. Lucinda ghosting her. A stress fracture that wouldn’t heal. Parents absent without leave. The final college rejection letter sat on the kitchen table, last in a line of terse, nearly identical quasi-apologies: A deep pool of applications this year, more excellent candidates than places, please don’t take it personally and do something we’ll all regret. Words along those lines, anyhow, as if the admissions officer felt terrible, wasn’t just feeding her copypasta. As if things had truly, nearly worked out.

She spent her days alone in the house. The track team had forgotten her. Nobody at the store except Paul seemed to care that she’d quit, and she was sick of hearing from him. It had been a lousy job, shoddy hours, a summer gig stretched into fake full time. She was eighteen and nowhere. Online, she researched flatpacks. Half a dozen times, she almost went for it. Then came a Sunday when her mother didn’t bother to call. Ten minutes a week telling Regan about all the busyness at work had become too much to ask. A proper family would have been finishing dinner together when Regan phoned the consulate in Auckland, where it was already Monday morning, and listened to her mother’s secretary ask if the situation was urgent.

‘Are you all right?’ the secretary asked, as though just then realizing that Regan might not be. When hiring staff, her mother had once told her, choose IQ over empathy. Regan hung up.

She would have called her father, but the treatment centre had a policy and she didn’t want to trigger him, so she laced up her running shoes, striking a deal with herself. If she could manage a single pain-free mile, she wouldn’t place the order.

Outside, the first ten steps felt how a run was supposed to feel, unfettered, loping, legs light as milkweed gone to fluff. There was only a little dizziness from skipping lunch. In her mind, she was already blocks away, running across the pedestrian bridge into the park, when her foot burst into its familiar agony. She hopped to a standstill, not even out of the cul-de-sac. Then she limped back to the house.

That night, with her dinner of Special K uneaten, the dregs of a wine bottle silty in her glass, and the final purchase page aglow on her phone, she had an urge to see whether her parents were somehow upstairs in their bed, magically returned without telling her. The last rejection letter still sat on the table, stuffed back into its envelope. Her running shoes lay flopped against each other in the corner. When she’d flung them there, she hadn’t seen Toodles camped over the heating grate. Now, he refused to come when she called, when she sobbed apologies, when she rained cat kibble into his bowl from knee height to maximize the clatter, then mimed eating the stuff to make him jealous.

‘Mmmm,’ she said, down on her hands and knees. ‘So good.’ The fishmeal smell turned her stomach, and it occurred to her that she was drunk.

On her phone, she accepted the terms and conditions. The screen froze, for sure a sign that her mother’s credit card was maxing out, but then the transaction went through. Regan called for Toodles. He didn’t show. Descending to her mother’s basement office, she printed the declaration from the website, scrawled a signature that looked like a crude forgery of her own, and left the sheet on the desk for the cops to find. A second later, her kilter went from under her. Her fall was broken by the floor. She crawled toward the stairs and almost made it before passing out. When she woke, she stumbled up to bed, leaving all the lights in the house blazing.

The doorbell gonged at noon. The night had been real; the ringing and her hangover were hard proof. She went downstairs determined not to wuss out, her brain a blister on the verge of popping.

No one stood at the door or in the driveway. There was only a box on the step, tall as her waist and hardly wider, plain brown cardboard without logo or address. Not cool that they’d just abandoned the thing when the website had made such a big deal about secrecy.

The lack of heft as she lifted the box over the threshold was weird. She set it in the living room, then went around the house closing blinds and curtains, sealing the doors and windows with masking tape. There was no sign of Toodles, and the kibble in his bowl sat untouched. Out on a hunting trip, probably. It had been yonks since his last murdered chickadee, but venturing outside let him pretend he still had the chops. Regan went to the mudroom and closed the latch on the cat flap, feeling guilty for not saying goodbye. Now, his last memory of her wouldn’t be her stomach’s heat as the two of them curled on the couch together; it was going to be her shoes, hurtling toward him with rubbery fury. He’d never know that she’d just saved his life.

In the living room, she still wasn’t ready to face the box, so she checked her phone. Paul had left a long voicemail about the power of accepting people’s love that she deleted halfway through. Then she saw that Lucinda had texted. Her heart did a pirouette, until she realized that all Lucinda had written was ‘Thinking ofu.’ For some reason, Regan’s first assumption was that Lucinda had meant to type ‘Thinking tofu.’ Which didn’t make much sense.

A knock at the front door, softly knuckled, froze her. It must be the dealer, back again. She’d done something wrong. She always did. They were going to hurt her. The website had promised grindhouse levels of punishment if she didn’t perfectly follow the instructions. A long silence stretched into a longer one, squeezing at her throat. Then she heard the scuff of shoes retreating down the walk. By the time she reached the peephole in the front door, whoever it was had disappeared. The box still waited in the living room. Maybe the knock had been a reminder to get going.

The box’s flaps were covered with layers of packing tape, so she retrieved the bread knife from the kitchen and sliced along the creases. After opening one end, she tipped the box onto its side and reached in. There’d been videos of people doing this, back before their relatives had got the clips taken down, back when there was a sick giddiness in witnessing the people’s ignorance of what was to come. She’d never managed to watch past this point in the proceedings: the box open, the package pulled out.

It was tubular and wrapped in clear plastic, like a chub of ground beef. What it held looked like a rolled-up rug, except the rug had a silvery tint and the smoothness of uncooked chicken. Also, the near end wasn’t a textile whorl; it was a flattened pair of human feet.

She bent to examine their snaky veins, their unvarnished nails, the eddying prints on the tiptoes like the patterns that waves leave in sand. The feet lay sandwiched between the wrapping on one side and the rolled-up legs attached to them on the other, their heels deflated, the pancaked flesh spreading from ankles that had been folded forward to a boneless angle.

Regan fingered the wrapping and felt no warmth. She rolled the package across the carpet, inspecting it as she went. The knees aligned neatly with one another, the skin there thickly ribbed. Her eyes scanned upward along the backs of the thighs until she realized what came next and grew flushed. By the time she turned the thing further, her forehead pricked with sweat, but she only found herself back at the feet, curiosity rebuffed by the roll’s tight coil.

Now was when things were supposed to start their end. One slice of the knife and she’d have just a few days left to live. She thought of calling Lucinda and letting her know, asking whether she still thought of Regan as a survivor who would do fine on her own, if she still believed that the stress fracture was bound to heal, if she was still so sure that a college would write with good news.

Across the room, a whole shelf of the built-in bookcase lay empty. Her father had insisted on taking way too many books with him to the treatment centre. Philosophy books and meditation books and books about sustainable living. Books with titles that told you to take six steps toward self-care, think like a puppy, or unfreeze your inner caveman. Books that promised to change your life. He seldom actually read them, but he liked to leave them around the house like a squirrel stashing nuts, nervous about future need.

Regan’s head felt too heavy to hold up. All her life, she’d tried to be a good person. She hadn’t read all the self-help books, either, but she’d worked hard chasing happiness, maybe harder than her father had. Other people didn’t need to put in such an effort. They made it seem like happiness was an easy night together, like you could just text ‘u up?’ and happiness would come over, like it wouldn’t slap you when you tried to hold its hand. Didn’t she deserve a bit of that? If not true happiness, then at least a few days of induced contentment. Someone to take care of her, make her feel good at the end, just by being there. Never mind that it was all chimerical. At this point, she’d take even a chemical miracle.

From A Suitable Companion for the End of Your Life. Copyright © 2022 by Robert McGill. Published with permission of the publisher Coach House Books.


A Suitable Companion for the End of Your LifeCoach House BooksExcerptRobert McGill
Share: 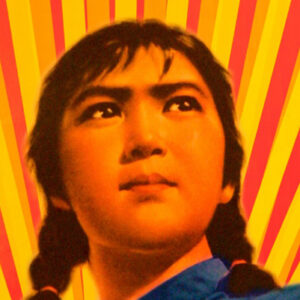 Forbidden City by Vanessa Hua, Read by Catherine Ho Every Monday through Friday, AudioFile’s editors recommend the best in audiobook listening. We keep our daily episodes...
© LitHub
Back to top