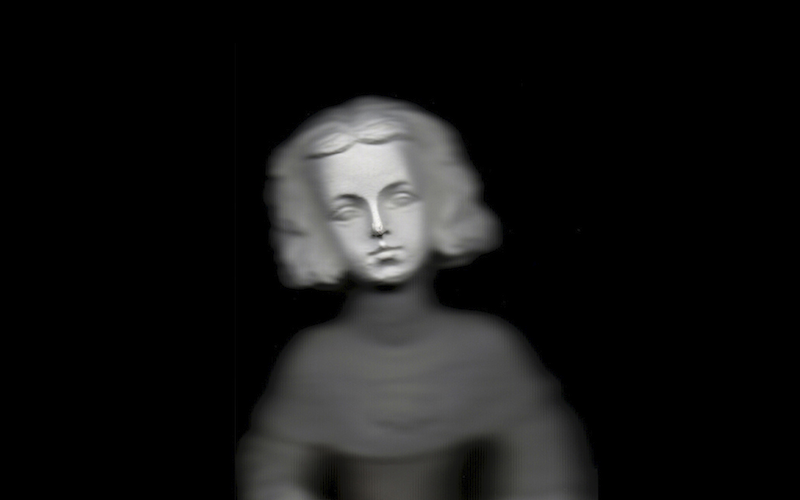 "If a statue could sit up who was to say that it could not rise and walk?"

In her Scanogram series, Ria Patricia Röder creates photographic collages by bringing together a distinct variety of pictorial elements on a scanner screen, in a complex process that questions different forms of depiction. Röder invited eleven authors, including Dana Spiotta, Lauren Groff, and Lucy Ives, to each select a single Scanogram and create a text in response to it. Below is the story Laura van den Berg wrote in reaction to “Menina.”

In the summer of my failure, I discovered new ways to pass time. Norwegian Slow TV, for one. A woman knitting. The nine-hour train voyage between Trondheim and Bodø, through the frozen heart of winter. Or, Bergen to Oslo—a gradual passage from snow and stark trees to blond fields with red barns to pitch-dark tunnels. If you watched the platforms carefully you might see a woman pivot from the edge, her skirt flaring; a man in a cap reading a newspaper on a bench, the child beside him staring out and out. The arcless arc of a human moment.

That summer, sleep was among the many things I was failing at, so a psychiatrist friend suggested afternoon walks in the woods, armed with headphones and ASMR recordings; he said this activity was good for settling the nerves. The recordings were hushed and repetitive—a fingernail tapping a wall, unintelligible whispering, the combing of hair. I found a whole world of ASMR celebrities online, waiting to entrance people like me. My favorite was Dmitri, and I wasn’t alone: he had 1.5 million YouTube followers. Despite his popularity, I couldn’t find any photos of him online, just sounds. His specialty was stroking a bedspread, the rhythm amplified to sound like the ocean. At a different time, I might have found walking alone in the woods to the sound of a strange man stroking a bedspread creepy, but at that moment in my life I felt there was nothing left for me to be afraid of.

If a statue could sit up who was to say that it could not rise and walk?

On occasion, I came upon strange things in the woods. A bucket of plastic oranges. A headless doll. The carcass of a small animal, a raccoon or a cat, the ribs picked clean and arranged in the shape of a blossom. A white granite statue laid out under a tree, the kind you might expect to find in a churchyard or a cemetery. That afternoon, I paused my recording and peered down at the robed figure, to see if I recognized the face, but someone had hacked away at the stone eyes and the nose and the mouth—the figure could have been some famous apostle and no one would have been able to tell. 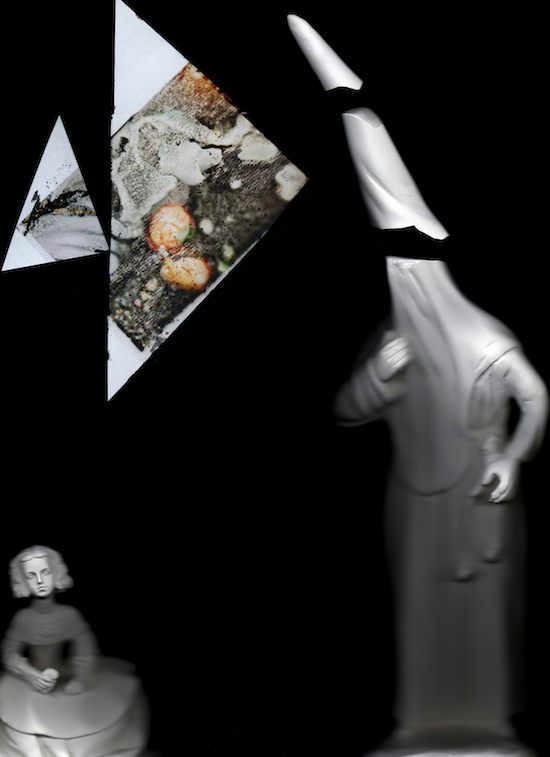 “How do we end up where we do?” I asked the broken stone face. “What does any of this mean?” In the summer of my failure, I often felt bewildered by the shape my days took, the hours guided by Dmitri and Norwegian Slow TV; I only spoke to other human beings when I went to the post office and the grocery store.

I wasn’t expecting an answer, not from a defaced statue in the woods. I was starting to walk away when I felt a wind at my back and I heard a voice say, “The worst has not come yet. You must prepare. But neither has the best. You must prepare for that, too.”

I turned and saw that the statue was sitting upright and pointing a broken finger at me. I screamed and stumbled backwards, my headphones flapping around my neck; when I got back to the cabin I was renting, I locked the door behind me, pulled shut the floral drapes. If a statue could sit up who was to say that it could not rise and walk? I stayed up all night, watching the train chug from Trondheim and Bodø and listening to Dmitri pet the bedspread. I wondered how he passed the time while he was recording these strange missives, or if he was so focused on the matter at hand that time passed itself.

I had never been to Norway before, though that fact about myself would one day change. Seven years after that summer of failure, I spent a week in Oslo for work. I rode a train to Bergen and took a funicular deep into a forest and avoided religious statues, as I would for the rest of my life, and listened for the name Dmitri because I still longed to see his face. 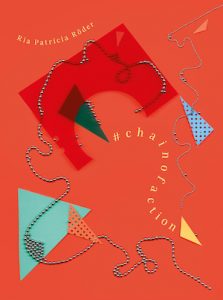 Laura van den Berg’s most recent novel, The Third Hotel, was an ABA IndieNext Pick, named a best book of 2018 by over a dozen media outlets, and a finalist for the Young Lions Fiction Award. She is also the author of one previous novel, Find Me, and two story collections. Her honors include the Rosenthal Family Foundation Award from the American Academy of Arts & Letters, the Bard Fiction Prize, and the O. Henry Award. Laura van den Berg lives in Cambridge, MA, with her husband and dog, and is a Briggs-Copeland Lecturer in Fiction at Harvard. Her next story collection, I Hold a Wolf by the Ears, is forthcoming from FSG in 2020. Ria Patricia Röder is a German-Portuguese visual artist currently living and working in Berlin, Germany. Her work has been shown internationally in solo and group exhibitions. The Scanograms were recently presented in solo exhibitions at Sla307 Art Space in New York City and Galerie de Zaal in Delft, The Netherlands.

Erik Larson on Writing Wartime Life During the London Blitz 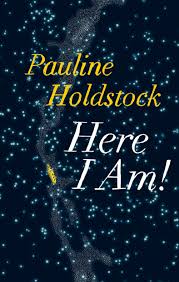 You probably want to know what happened. I will tell you. It goes like this. It was Wednesday. It was just MyMum and me and not MyDad...
© LitHub
Back to top
Loading Comments...