A Song From Faraway 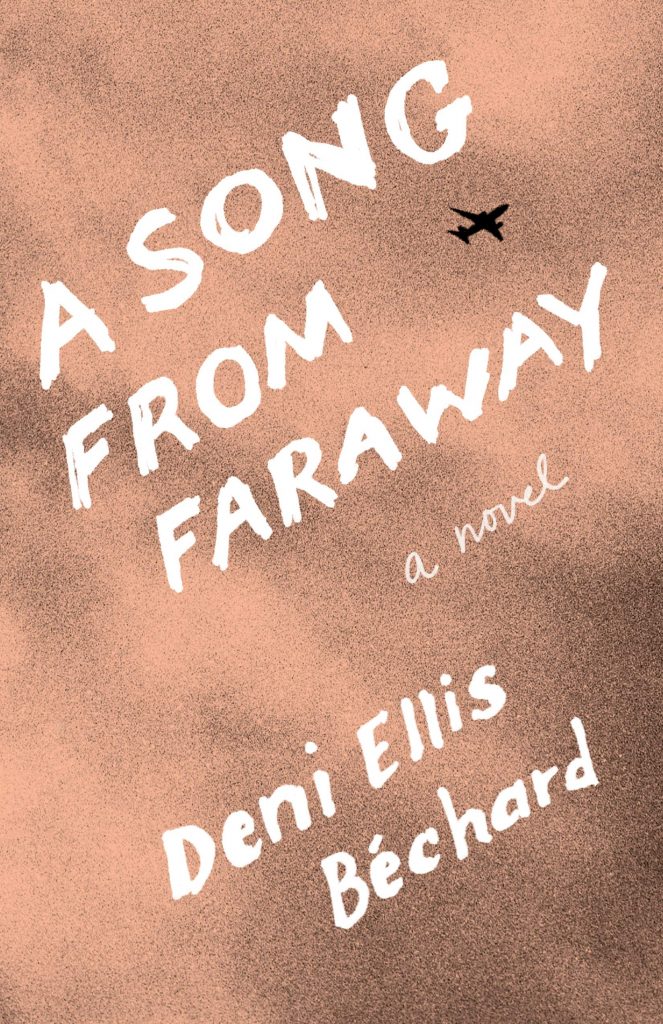 The following is excerpted from A Song From Faraway by Deni Ellis Béchard. Béchard is the author of seven previous books. His fiction includes Vandal Love, Into the Sun, White, and, most recently, A Song from Faraway. He is also the author of Cures for Hunger and Of Bonobos and Men. Béchard’s articles, fiction, and photos have been published in dozens of newspapers and magazines, and he has reported from India, Cuba, Rwanda, Colombia, Iraq, the Congo, and Afghanistan.

Sparrows traversed the cooling sky, as if coasting on shadow. The mountains darkened, the pale lines of roads standing out. A single light glittered like a rising star near the radio tower.

The general sped through the city. It wasn’t the way to Amir’s house.

“That was good lying,” he ﬁnally said. “It wasn’t lying.”

“I can tell a liar. But what does it matter? It’s not what I care about.”

They were leaving the city. They’d come upon a military checkpoint, had been waved through, and were riding now between brown, eroded ﬁelds.

“I want you to look at something.”

“A grave. I want to get your opinion.”

“No,” the general said and then asked about Francis’s father, more directly than he had during the dinner. He spoke as if trying to sound casual, but his voice remained tense. He wanted to know who the woman was, the mother of the lost child, and Francis explained what little he recalled from reading his father’s journal: the young woman who’d been brought to cook for the agents, the intimacy between her and his father, the pregnancy, and his father’s ﬂight.

I had to be out of the country within the hour. She was at the bazaar, buying food. I took two thousand American dollars in the smallest currency I could ﬁnd—money intended for prospecting for intelligence. I left it inside her bag of embroidered cloth.

“Do you think,” Francis asked, “that the child can be found?”

“No. Your father could have told you that. He was a knowledgeable man. He would have known what was coming.”

The Zagros Mountains appeared, familiar from Francis’s readings: the border with Iran, treeless and ragged, dun-colored in the darkening haze of distance.

The general veered from the road onto a barely visible path that ran behind an earthen mound the size of a house. He stopped the truck, got out, and took a shovel from the back. Francis followed him, and the general pushed the shovel into his hands.

“I want you to tell me when this grave was dug.”

He pointed to the foot of the mound, and Francis wondered if it was an archaeological remain of some sort.

“The one right here,” the general told him. “Dig. You will see it.”

Above the mountains, the sky was extinguished, and far to the west the sun dissolved into a mist of crimson light.

The ground was soft. With each swing, Francis sank the shovel blade deeper, and a hole quickly opened up at his feet. He wasn’t used to this sort of work. Almost immediately, blisters formed on his palms. Soon, it was completely dark.

“Keep digging,” the general told him, his voice harsh now.

Francis dug until his hands were swollen and raw. The shovel handle was wet, with blood or sweat; it was too dark to see.

“I have to stop,” he panted, the hole now waist deep. He was afraid and couldn’t catch his breath. His hair clung to his forehead. Sweat dripped into his eyes.

The general had been standing near the truck, and he took something from beneath the seat and came over and stood above Francis. He aimed a pistol at Francis’s head.

Francis’s arms and legs shook. His ﬁngers cramped against the wood, but he no longer felt them. He told himself not to cry—that he would survive this. He dug, and only when he stood shoulder deep did he stop.

“Yes, you can.” The general’s voice had changed, thick as if with emotion or grief. It did not sound like rage. “Tell me how old this grave is or I will shoot you.”

The black sky revolved as Francis swayed weightlessly, staring up. The muzzle of the gun was faintly darker than the night.

“I’m sorry. I didn’t know,” Francis said, forcing himself not to cry. “Amir and Rana didn’t know. Only Nasser knew. They’re both innocent.”

“Yes, innocent,” the general repeated. “You Americans and your innocence. But you are not innocent, are you?”

“I didn’t want to get them in trouble.”

“So kind of you. So generous. But I don’t care about that.”

“Then what do you want?”

“I don’t want anything. We are here because of your father.”

“I don’t understand.” But gradually Francis did.

“He was stationed here. That’s why I had your computer searched. For photos. I recognized him. His name wasn’t William when I knew him. For three years, he was our friend. We did everything he asked. We could have defeated Saddam.”

“But that doesn’t involve me. Whatever happened isn’t my fault.”

“Why?” Terror and regret gripped the muscles of Francis’s throat, but he commanded himself to think, to stay calm. Time unspooled, stars pulled free of their fabric, and brieﬂy he could not ﬁnd himself, didn’t know who or where he was.

“Why?” the general repeated. “You’re educated. From what I recall of your literature, vengeance can be taken on the son for the father’s crimes.” He spoke as if to sound reasonable, but his voice trembled. He calmed himself, strangely also gasping, as if he too were terriﬁed. “I had a few years of education in England. Revenge was a popular subject in the books I had to read. So was sons walking the paths of their fathers, because it is our nature to return to the places that create us.”

“That’s hard to say. You are here. You have returned.”

“I didn’t return because I was never here before.”

“Yes, another forgotten notion. But the son of a king, is he not also the king? We return to the places of our fathers even if we have never been there ourselves.”

No moon had risen to light the general’s face. His silhouette hung against the sky.

“What did he do?” Francis asked. Every part of his body shook uncontrollably.

“One day,” the general told him, “one day we had Saddam’s army pinned down and the next the Iranians and Americans were gone, and Saddam knew before we did. We were slaughtered. Thousands killed. Hundreds of thousands forced out of the country, into Iran and Turkey. Hundreds of thousands relocated to the south by Saddam. We were massacred. Your father came here drunk on self-importance. He used us and threw us away. So if you want to know where your brother or sister is, lie down in this dirt.”

Francis could barely stand. He had to be calm, to think of a way out.

The general no longer spoke with rage, but in a whisper that terriﬁed Francis with its intimacy.

“I lost my brother that day. He was also your father’s friend.”

On the road, the sound of a large engine drew close. Headlights fanned out, and at the curve beyond the mound, a truck down-shifted, the low gear thrumming in the empty night. The general looked up and waited. His features were swollen. Light shone on his eyes and teeth and on his wet face, his pocked and ﬁssured skin. Then the truck passed beyond the mound and was gone.

Brieﬂy, Francis thought that if he kept the conversation going, he might be saved. But he was wrong. All that he wanted was as unreal as a daydream, and he gave up this desperate longing to be far away. As he calmed, he sensed the distant shuttling of thoughts he hadn’t been aware of, the swift passage between intuition and reason, and then his mind quieted, and he saw his place. He saw himself and the general, gazing at each other in the dark, the raw earth spreading out around them. Francis studied this moment as if holding it in his hands, as if he might trace the relief of a boy and a soldier carved upon the night.

“Tell me when this grave was dug,” the general commanded. But Francis had surrendered his terror. He’d accepted this moment as if it had been shaped centuries ago. He looked up at the general.

“He betrayed me too.”

“He betrayed all of us. He was a coward. He was a nobody. I’ve hated him all my life.”

The general lowered the gun. He rubbed his thick jaw and his neck and leaned his head back and sighed. He stood like that for a long time, breathing loudly in the dark.

“If you need to kill me,” Francis told him, “I understand why. I don’t want to die, but I understand your reasons. Except that I don’t even know if he’d care.”

The general stood, staring at the night. Francis wondered how much longer he could hold this moment, this feeling of acceptance that might be the wisdom of desperation or his mind’s ﬁnal ruse, or simply adrenaline and the brain’s chemicals cutting away his connection to the body so that he could die in peace.

“If you can recognize a liar,” he said, “then you know I’m not lying.”

The general slowly looked down at him. “Come,” he said. “Get out.”

He motioned Francis to the truck.

Later, as the lights of Sulaymaniyah lifted into view, Francis felt his chest release, felt the longing and confusion of his body rush back.

“That grave,” the general said without inﬂection, “it was dug today, but it turns out that it’s not a grave after all.” 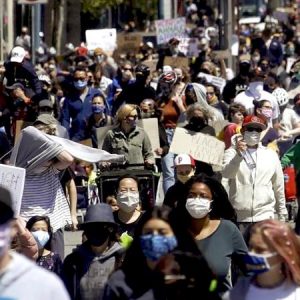 Letter From Houston: Let These Protests Bring Light to America The news of George Floyd and Christian Cooper in the same day brings a clicking to your jaw, right at the back of your mandible....
© LitHub
Back to top