Matthew Ingram on How We Manage Human Suffering

In the course of three years spent researching my book Retreat: How the Counterculture Invented Wellness I explored the tapestry that the counterculture spun trying to solve the riddle of human suffering as it pertained to health. I spoke to macrobiotics foodies, anti-psychiatrists, LSD psychotherapists, radical feminists, Jungians, meditators, gurus, and the founder of the US Free Clinic network. I travelled from East to West—from Kyoto, Tokyo, Varanasi, Bodh Gaya, Basel, London to San Francisco and the Big Sur coastline.

Certainly, I was hoping to learn lessons that would be relevant today, but I had no idea our collective health was about to receive a shock in 2020. Many of us it seemed we were able to muddle by without thinking about our health too much. All over the world we’ve become accustomed to being propped up between bumps (like sugar and alcohol) and cushions (painkillers of varying intensity). The Buddhists would call this unskillful living—a life preoccupied with attachment.

The principles of the macrobiotic diet trend of the 1960s would suggest that the wet markets of Wuhan and the terrible sanitation and cosmic injustice they represent would inevitably accrue bad karma. Although it is frequently misunderstood as being the same as veganism, macrobiotics has a small place for fresh fish, shellfish and free-range or wild fowl. However, such food is “yang” and to be eaten sparingly. Founder George Ohsawa advised eating fish only once a week. There is no sugar in the recommended macrobiotic diet.

The lesson of Vipassanā meditation, which I myself benefited from when experiencing the coronavirus, would be to calmly “watch” the process; to peacefully attend to my breath, and let the chips fall where they may. The counterculture, with its romantic approach to communal living, would have been horrified to see us confined together in nuclear family units; though in my experience, that has been fun—a last chance to hang out with my 18-year-old daughter before she flies the roost.

Where I live in the United Kingdom one message is obvious. Boris Johnson has launched a “war on fat” in light of research which has found that obesity doubles the risk of hospitalization from the coronavirus. The fact that a quarter of patients who have died from the virus in the UK had diabetes makes it painfully clear that coasting along as we have been is no longer feasible. Covid-19 has also exposed the cracks in our mental health. The WHO has warned the UN of a crisis in response to “the isolation, the fear, the uncertainty, the economic turmoil…”

“If you get yourself right—then [if] society is composed of people who are balanced and right within themselves—then you end up with a society that’s like that.”

Today we might look to authority figures like our Prime Minister to guide us in these dark and uncertain times. Distrust of the state following the horrors of Nazism and Stalinism prompted the counterculture to see things differently. The man who defined the term “counterculture,” the academic Theodore Roszak remarked, “If the melancholy history of revolution over the past half century teaches us anything, it is the futility of a politics which concentrates itself single-mindedly on the overthrowing of governments, or ruling classes, or economic systems. This brand of politics finishes with merely redesigning the turrets and towers of the technocratic citadel. It is the foundations of the edifice that must be sought.”

Accordingly, the Beat generation and the Hippies worked on themselves and took personal responsibility for their health to heart. Beatle George Harrison took the countercultural line when he expressed the necessity of “revolution” needing to happen with the individual: “Well, again I’ll quote Maharishi, which is as good as quoting anybody else and he says ‘For a forest to be green, each tree must be green,’ and so if people want revolutions, and you want to change the world and you want to make it better, it’s the same…”

Again and again my interviewees echoed this sentiment and drew conclusions which related to their own health. Macrobiotic food pioneer Craig Sams told me: “If you get yourself right—then [if] society is composed of people who are balanced and right within themselves—then you end up with a society that’s like that.”

Anti-psychiatrist Joe Berke echoed Sams: “Social relationships where they are destructive or beneficial… reflect what goes on in a person, as in the same way a person internalizes their relationships… And that’s why in the counterculture we thought we could change the system by changing ourselves.”

The critique of the counterculture’s experiment in wellness was launched clumsily into the mainstream by Tom Wolfe in his pivotal 1976 article “The Me Decade.” This and Christopher Lasch’s 1979 book The Culture of Narcissism rounded on the counterculture and its fellow travelers. Theirs was not a valid form of political engagement, the critics sneered—it was pure selfishness.

The belief that moral bankruptcy resulted from the cluster of health methodologies that emerged out of the counterculture’s engagement with psychoanalysis, psychedelic drugs and eastern philosophy has endured. It is trotted out notably in Adam Curtis’s documentary Century of the Self (2002) and expressed in an interview therein by Yippie party founding member Stew Albert: “People who had been politically active were persuaded that if they could change themselves and be healthy individuals, and if a movement grew up just aimed at people changing themselves, then at some point all that positive change going on, well you could say quantity would become quality, and there would be a spontaneous transformation of society. But political activism was not required…”

This nakedly quantitative, pseudo-scientific attitude towards change never took into account that some of the key countercultural revolutions were slow, intimate, and ongoing. Apart from its innovations in music, fashion and computing, the counterculture shaped gender equality, sexuality, religious tolerance, organic farming, and whole foods. Both mindfulness and the recent crescendo of interest in psychedelics point to a resumption of its project to build a bridge into space.

Some of its innovations were more tangible but were centered, not on the violent overthrow attempted by radical countercultural organizations like the Weathermen, but on grassroots compassion. In Haight Ashbury I interviewed Dr. David Smith, who founded the Free Clinic there in 1967. The concept of the Free Clinic itself evolved in the manner of an open-source franchise. As he explained to me, “We didn’t copyright it, we gave it away… many of the Free Clinics in the United States… trace their origins back to this interaction with the Haight Ashbury Free Clinic… The Free Clinic has become a national movement… But the history is only how it got started, not what’s happening now.” The Free Clinic’s slogan “Health care is a right, not a privilege,” ended up as one of the theoretical cornerstones of Obamacare.

Like Wolfe and Lasch before them, orthodox critics like Jeremy Carrette and Richard King, the authors of $elling Spirituality, take a dim view of the massive growth of today’s mindfulness meditation. “Privatized spirituality emerges here as the new cultural Prozac bringing transitory feelings of ecstatic happiness and thoughts of self-affirmation, but never addressing sufficiently the underlying problem of social isolation and injustice.” These authors are not shy of pinning the blame for this on one psychologist in particular. Beyond his famous hierarchy of needs triangle, Abraham Maslow is well known for his view that “revealed” religions rest their validity solely on their communication of the “original mystic experience or revelation from the lonely prophet.” Carrette and King comment“ The greatest shift towards private spirituality, however, can be seen in the works of Abraham Maslow, particularly as his work was picked up by the 1960s Hippie culture and dovetailed with the psychedelic world of Aldous Huxley and Timothy Leary.”

The “collective ego,” the healthy and individuated community, inevitably grows out of a pursuit of the individual’s health.

So easy to criticize, mindfulness is a splendid thing. The bitterness over commodification, homogenization and the lack of social justice exhibited by modern spiritualities happens a great distance away from the more profound question affecting not only our wellness. It is our alienation from the spiritual which is the real problem.

The counterculture’s greatest legacy must be the conviction with which it discovered what the founder of Analytical Psychology C.G. Jung called “the self.” In the course of its far-sighted research into eastern philosophy (itself arguably a repackaging of the foundation of Western thought, Ancient Greek philosophy) the counterculture came to terms with a spirituality that had an unparalleled solidity of form.

A connection such as this, Jung argued, would be the fundamental method of delivering us from ourselves: “We moderns are faced with the necessity of rediscovering the life of the spirit; we must experience it anew for ourselves. It is the only way in which we can break the spell that binds us to the cycle of biological events.”

To say, as its critics do, that a preoccupation with wellness blinds the subject to more important matters not only belittles that perfectly right-minded endeavor, but also misses the point that a care for what I term the “collective ego,” the healthy and individuated community, inevitably grows out of a pursuit of the individual’s health. This is because sickness is a riddle to which an alignment with “the self” is the answer. Suffering is an issue so closely related to spirituality because it is the preeminent means that “the self” uses to communicate its will to us. 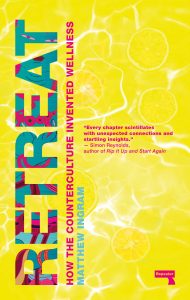 Retreat: How the Counterculture Invented Wellness by Matthew Ingram is available via Repeater Books.

Matthew Ingram is famous in his own head for throwing raves in West Africa in 1993, writing for Teletubbies, fleetingly being in The Black Dog, his cult music blog Woebot, writing for the Wire and FACT magazines, setting up the Dissensus forum and putting out a series of LPs. His "Vitamin C" animated documentary was shown at the Chicago International Children's Film Festival. 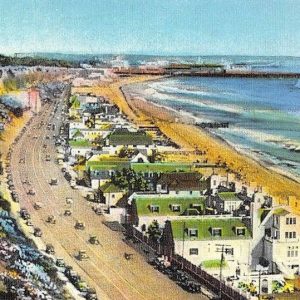 When Elizabeth and I weren’t shuttling baskets of fries and feeding tourists a fake age, fake name, fake history, we fled...
© LitHub
Back to top
Loading Comments...