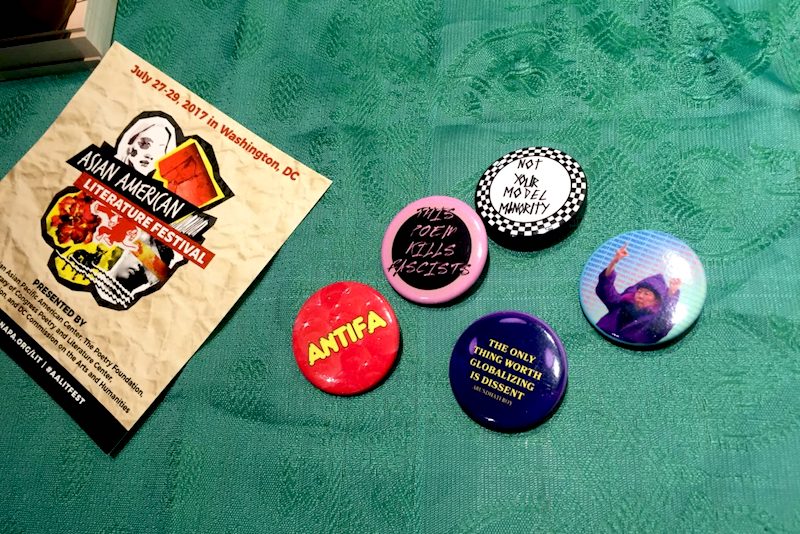 A Report from the First-Ever Smithsonian Asian American Literature Festival

"I Felt Like People Were Talking to Me More Directly
Than They Had in a Very Long Time."

“No one is immune to the fantasy of authenticity,” Paisley Rekdal said. It was the last panel of the second day at the Smithsonian’s first-ever Asian American Literature Festival. I’d already gotten my tarot cards read, spoken on a panel, participated in a speed-mentoring session, eaten too many carbs, and slept in a dorm room that resembled, as a friend said of the picture I texted her, a World War II hospital. I probably should have wanted to take a nap, but I was leaning forward with my chin in my hand, quite literally sitting on the edge of my seat, because I felt like she was talking to me. Over the course of the whole weekend, I felt like people were talking to me more directly than they had in a very long time.

The festival, which focuses solely on Asian American literature, is the first of what will be a yearly event. It’s put on by the Smithsonian Asian Pacific American Center in collaboration with a number of organizations, including Poetry Magazine, Kundiman, and the Asian American Writers’ Workshop. The initial day was held at the Smithsonian National Portrait Gallery, the second day at The Phillips Collection, the last at the Library of Congress. The fact that it’s called a festival, not a conference, is demonstrative of its communal, celebratory spirit.

Though the general spirit felt lighthearted, the words and intention were weighty. This kind of nurturing environment is rare, which I mentioned to Lawrence-Minh Bùi Davis, the curator of the Smithsonian Asian Pacific American Center and editor-in-chief of Asian American Literary Review. “We are not living writ large in a welcoming space,” he said. “Many of us move through violent spaces all the time and are subject to all kinds of awful treatment and conditions, so it’s our responsibility to work against those and to create caring spaces.” It sounds both natural and difficult, but either way, the intentionality behind the festival shone through.

My schedule for the first day included a talk on Vietnamese diasporic literature featuring Vu Tran, Linh Dinh, and Cathy Linh Che, a reading by queer Asian writers Wo Chan, Peggy Lee, and Rajiv Mohabir, a fiction reading by Don Lee and Akhil Sharma, and the Poetry magazine summer issue launch. There were stations set up from various organizations, from Kaya Press to Bamboo Ridge to AAWW, in the ‘literary lounge,’ where attendees made self-care cards, memes and child-to-parent letters.

The following day offered one-on-one mentoring sessions with Nicole Chung and Jennifer Chang, and though I’d neglected to sign up, I heard that Nicole had an opening and was lucky enough to sit down with her in a bright side room at the museum. I had just read Nicole’s latest essay online and was thrilled to meet her and talk about representation, fiction vs. nonfiction, and literary community in person. “I always love the chance to talk with writers at all levels, young writers especially,” she told me about the mentoring sessions that day. “A lot of writers need just a little bit of encouragement—honestly, I know I still need that—so it’s a privilege to be able to offer that feedback and that kind of encouragement.”

After that, I saw Kazim Ali and Franny Choi give a literary address with a large audience squeezed into the bookshop of the Phillips Collection, inverted umbrellas hanging overhead; Writer-Scholar speed dating went on nearby in the Carriage House. The AAWW Margins Fellows for this year (myself included) then read our work. One of the fellows, Yanyi, said it felt amazing to read in a space where his poems related one of many diverse Asian-American experiences. “I didn’t have a second thought about whether the audience would ‘get’ what I was writing about, nor did I have to worry if I was speaking for anyone but myself,” he explained.

Following that, Ryan Lee Wong moderated the Kundiamn/AALR Mentoring Reading, which featured Alexander Chee, Paisley Rekdal, Grace Jahng Lee, and Justin Monson; he began by asking us all to take a collective deep breath. I was particularly struck by something Alexander Chee said about what he would like to pass along to his students:

The idea that the white imagination is the only thing that’s limitless is this idea that we’re always fighting, if not in ourselves, in other people. When I was presenting my manuscript to publishers, I felt like I wasn’t legible to them because they had never met anyone like me. It was like they couldn’t believe I existed, much less that this book had been written that was in front of them. That cured me of any idea of that imagination as limitless—it was so incredibly limited that I was shocked. But what I did understand completely from that experience was that they felt they had the power to define what was real and what was not. That was what I would be trying to take back from them for the rest of my career, so when I think about what I’m trying to pass on, it’s a sense of confidence to face that.

The idea of mentorship was emphasized throughout the festival, When Kimiko Hahn gave a lengthy, fascinating lecture on Asian American literary history later that day, she quoted from several female writers. “You may have noticed all the posts I’m reading are women,” she said. “Those are the ones who became my mentors, so I’m going to continue in that vein.” The connection between students and teachers was so visible, and I thought of what Lawrence had said about the vitality of support and community. “In all of the programs we do at Smithsonian Asian Pacific American Center, we are trying to build in mentoring, not just in a sense of older to younger or established to emerging, but also horizontal mentoring with the idea of sharing and exchange: sharing resources, exchanging and learning, being accountable to one another, and ethically growing together.”

It’s hard to ignore that this festival was taking place in Washington, DC, a city not exactly known for being a cultural hub, which is now also home to a fascist maniac putting our lives in jeopardy each day. Saturday was the last day of the festival, and it was held in a grandiose room at the Library of Congress. There, Sally Wen Mao read from a poem of hers called “Inauguration Poem.” As she introduced it, she acknowledged how strange it was to be on that stage, so close to the site of the inauguration, reading this poem she’d crafted from it. (The poem was composed from the words that had never before been spoken in an inaugural speech.) “It feels so radical to create this space in this location, this space that asserts how important language and words are, how words and language are related to power. How they can exploit power but also reclaim it. I hope we come away from this weekend with that in our hearts, the idea that our words and language can reclaim that power.”

Kazim Ali got to the stage and said, “I’m afraid I’m going to go rogue, but I’m up here already so you can’t stop me,” and instead of reading a poem from Poetry magazine, read something new he was working on. (As if any of us would have stopped him!) Vt Hung read next, saying that his friends told him to read something sex and violence. “That sells, they told me! I can’t promise that, but I can promise there will be cats and sadness.” Mark Keats followed him, saying, “Well, this is not intimidating at all.” (His work also incorporated felines.) He said that when he started at Kundiman, he was told it would change his life, and it did. “I’ve never felt so comfortable in a group of people. It’s a lovely experience, to feel yourself.” It struck me that perhaps some people might not understand the weight of this, of simply being allowed to feel yourself.

Although the spaces reserved for the talks were awe-inspiring and beautiful, I felt a rush of relief when we migrated that night to Dupont Underground, an arts organization space inside of an abandoned subway tunnel. We descended red-painted stairs and entered a dark, cavernous tunnel, revealing a wide-open space that was sweaty, loud, and felt ecstatic. There was a candlelit bar and a pop-up stand selling falooda, a milky, sweet Indian dessert. The literal light at the end of a tunnel illuminated bleachers overlooking a stage where there would be a slam poetry competition and then a literary karaoke party.

“If you wanna make out with someone Asian, make some noise!” the host yelled as the slam began. Judges in the audience wrote their scores on loose-leaf paper and held them up for a number of poets, including Paul Tran, Kita Marshall, Justin Woo, and Jess Rizkallah. The winner of the night, Beau Sia, took the stage with a piece he called, “Trigger Warning for All Non-Racists That Love to Engage Me on Their Non-Racism” which ended with a resounding, “We don’t need you—notice given.” The night proceeded on to Literaoke, which included writers like Franny Choi, Wo Chan, Timothy Yu, and Tarfia Faizullah.

On the first night, I’d stopped into the opening reception held in the courtyard of the Smithsonian National Portrait Gallery. It was a faux-outdoor space with high, windowed ceilings, illuminated trees, and projected videos stationed through the room. I felt a bit woozy from the long bus ride and the stifling humidity. I thought how it looked like a bit of a fantasy, a magical forest from someone else’s mind. I watched fans approach a writer as he waited in line for a drink, one after the other, complimenting him, asking him to sign his poem in copies of the newly released Poetry journal, posing for selfies. I looked around at the room and realized that I wasn’t “the only one.” The poet asked his fan if he also wrote poetry (and offered his condolences when he answered in the affirmative) as a voice from the stage rang out, “Cheers everyone, to making history together!” We moved forward.

Mental Illness is Not a Capital Crime 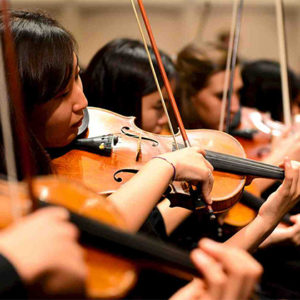 I met Marcia Butler at the Kenyon Review Writers Workshop, where I teach each summer. She’d recently sold her memoir, The...
© LitHub
Back to top
Loading Comments...