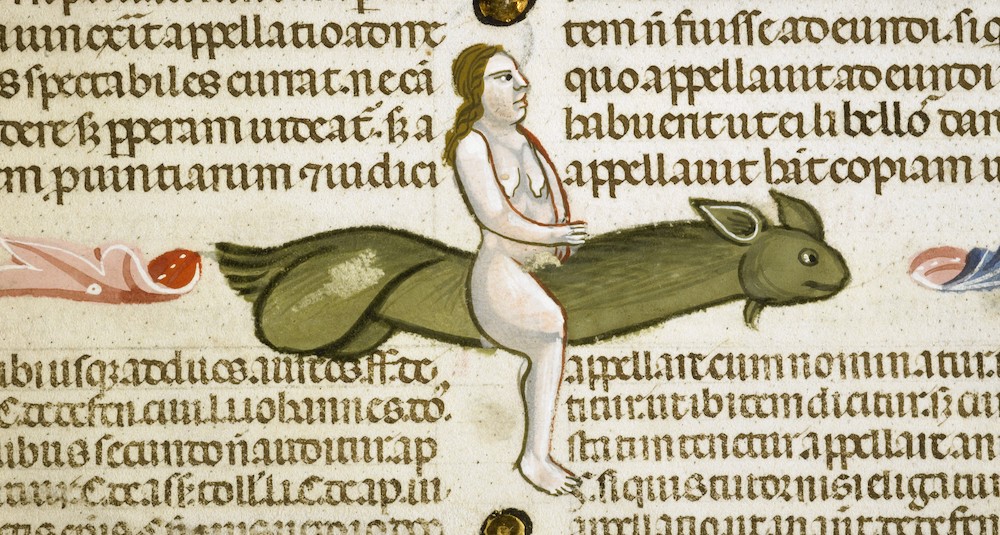 A Plethora of Penises: How People Wrote About Sex in the Middle Ages

In a medieval French poem called The Four Wishes of St Martin, a Norman peasant is granted four wishes by his favorite saint. Such good fortune should transform the poor man’s life—but his wife persuades him to let her make one of them, and promptly announces that she would like her spouse to be covered in penises. Immediately, his “whole body was a mass of pricks,” to the delight of his wife, who hopes that he will now be able to satisfy her.

He retaliates by wishing that she “may have as many cunts / As I have pricks,” and the woman is immediately covered with “cunts of every kind”—hairless and bushy, “virginal and splayed,” “cunts well used and cunts well made / and little cunts, cunts big as bowls.” Now they are both unhappy, so the peasant asks: “for him no pricks, for her no cunts.” But now the foolish pair have no genitals at all, and so their final wish is to be made as they were before: “a prick for you, a cunt for me,” as the wife puts it.

As anyone who has read The Canterbury Tales or The Decameron knows, sex appears frequently in medieval literature, usually in the form of bawdy tales featuring stock characters who find themselves in humorous situations. This ridiculous couple embodies two common medieval stereotypes: The husband is a fool (not least because of his willingness to trust a woman’s judgement), and the wife is sex-mad and obsessed with male genitals. Women like her are found throughout medieval literature, especially in the shockingly explicit fabliaux (a group of verses which were composed in France between the twelfth and fourteenth centuries), and other lesser-known collections.

In A Talk of Ten Wives on Their Husbands’ Ware, for example, the title characters complain in graphic detail about their husbands’ penises; one claims that her partner’s “penis peeps out before / Like a maggot.” The wife of The Fisherman of Pont-sur-Seine rejects her husband’s suggestion that she is only with him for the sex, but when he claims to have cut off his penis (and shows her one he has removed from a corpse), she is ready to leave him. Arguably this husband is one of the lucky ones: at least his wife wants to have sex with him, unlike the man whose wife tries to betray him with his friend, an innkeeper who is endowed with both “the most finely crafted, handsome, and thickest member in the whole region” and remarkable sexual stamina. Unbeknown to her, her spouse has arranged to take the innkeeper’s place, and so she has an extremely disappointing night.

The Blacksmith of Creil’s wife is similarly thwarted by her scheming husband. The blacksmith notices his young servant has an enormous penis and knows that his wife would “sooner have been dead and buried / than not secure herself a share.” So he tells her about it, claiming that “I’ve never seen a larger member.” She pretends to be disgusted, but when her husband goes out (or so she thinks), she propositions the youth. At this point, the husband emerges from his hiding place to dismiss the servant and beat his wife.

Medieval poets were, it seems, as obsessed with the human sexual organs as the foolish men and women they mocked in their verses—but why?

If some medieval authors favored matter-of-fact descriptions and explicit language, others delighted in constructing elaborate euphemisms for sex and the genitals. (Although it is worth noting that much of this anatomical language would have been considerably less offensive to medieval readers than it is to us—during the later Middle Ages “cunt” was a widely-used term for the female genitals, found even in medical textbooks—so such creative decisions are likely to have been motivated by a desire to make people laugh, rather than prudishness.) Many of these extended metaphors involve animals.

In The Squirrel, an extremely innocent 15-year-old girl meets a young man named Robin, who approaches her with his erect penis in his hand. She asks what he is holding; he claims that it is a squirrel and invites her to stroke it. He tells her that the squirrel likes to eat walnuts, which saddens her because she ate some yesterday, but has none left. He reassures her that the squirrel can get the nuts from her stomach, which he can access “par vostre con.” So they have sex, which is described in great detail: The girl cheers on the squirrel as it hunts for its nuts, and eventually the animal feels queasy and vomits copiously inside her. Similarly, The Maiden Who Could Not Abide Lewd Language is seduced by her father’s servant Davy, who convinces her that his hungry and thirsty “pony” would like to graze her “pasture” and drink from her “spring.”

For a twenty-first century reader, these stories are amusing, but there is often a sense that we are laughing at their medieval authors, rather than with them.

Others employ the language of construction. In one of The One Hundred New Tales (written in the 1450s for the Duke of Burgundy), a knight convinces a miller’s foolish wife that her private parts are falling off; the only solution is to hammer them back on as quickly and as frequently as possible. On several occasions the knight uses his “special tool” to perform this task. Her husband finds out and responds by visiting the knight’s wife, offering to use his own special tool to look for a lost ring. It takes several goes, but eventually he finds it. When the knight’s wife tells him what happened, he realizes that the miller has had his revenge. In a fabliau called The Girl Who Wanted to Fly, a student takes advantage of a foolish girl, telling her that he is grafting on the beak and tail she will need to achieve her ambition. Only when she falls pregnant does she realize she has been deceived; her seducer says that it serves her right for being too proud, and the narrator agrees.

Elsewhere, sex is described in medical terms, as in the story of a monk who wants to have sex with a young wife and realizes that he will only achieve this by deception. So he pretends to have a sore finger, and claims that it can only be cured if he “insert[s] my ailing finger into the secret recesses of an honest woman…and let it remain there for a reasonable length of time.” Although his profession does not allow him to do this, she insists that he must, and that she will help him. When they repair to bed, “He lifted up her undergarments and, instead of his finger, inserted his hard, stiff staff.” When she asks why his finger is so large, he explains that it is swollen because of his illness; when she queries that ‘sensation’ she feels, he says that the boil on his finger has just burst. His cure gives her so much pleasure that she insists he must come back if he has any more finger problems.

We should not ignore the possibility that, like us, medieval people simply enjoyed laughing at the ridiculous—and what could be more ridiculous than a man covered in penises?

Even more bizarre are the stories which anthropomorphize their protagonists’ private parts. In Guèrin’s The Chevalier Who Made Cunts Talk, a gallant knight comes across three maidens swimming in a woodland pool and preserves their modesty by finding their stolen clothes. For this good deed, he is rewarded with a rather bizarre power: he will never meet a female creature “whose cunt will not, when spoken to / be honour bound to answer you.” After testing his new skill on a priest’s mare (he learns that the priest is on his way to see his mistress), he pays a visit to a count’s castle. Various shenanigans ensue, and soon the countess learns of her guest’s curious talent. She thinks she can outwit him by stuffing her vagina with cotton wool, and she bets 40 pounds that her genitals will remain silent—but is publicly humiliated when the knight addresses her anus, which reveals the trick she has played.

Some verses go even further, presenting genitals as stand-alone characters capable of independent thought, speech, and movement—much like the genital-themed badges which became surprisingly popular in northern Europe in the decades around 1400, which show vulvas and penises engaging in unexpected activities including going on pilgrimage. In The Tournament of Nuns, a 15th-century German-language verse, a knight and his penis have an argument, which ends with the man castrating himself. The knight is scorned by women and spends the rest of his life as a hermit; the penis takes refuge in a convent, where the nuns take turns having sex with it, leading to fierce rivalries. Eventually the abbess decides they must compete in a tournament to win the penis, but the contest descends into a brawl, and it is stolen.

In The Rose Thorn, a beautiful young virgin bathes daily in her garden, as the poem’s male narrator spies on her. One day a magic root that bestows speech somehow comes into contact with her vulva; it complains of feeling underappreciated, and so the lady and her genitals part company. But when the suitor finds that he cannot have sex with his love, he rejects her, and the community mocks “the cuntless woman.” Meanwhile, the vulva offers itself to a young man, but he mistakes it for a toad, and kicks it away. Eventually the vulva returns to the lady, and the narrator helps by “nailing” it back into place.

Medieval poets were, it seems, as obsessed with the human sexual organs as the foolish men and women they mocked in their verses—but why? For a twenty-first century reader, these stories are amusing, but there is often a sense that we are laughing at their medieval authors, rather than with them, so that they emphasize how humor changes over time. We might wonder if these tales were intended to be erotic, but it is probable that they were designed to shock rather than to arouse, not least because pornography in the modern sense does not seem to have existed in the Middle Ages. (Although it is, of course, possible that some readers did find them titillating.)

Perhaps we should instead understand them as a product of a world in which sex was a source of pleasure but also of fear, lust being an unruly natural force that is not fully under human control, and which leads otherwise virtuous people to defy social norms and commit mortal sin. But we should not ignore the possibility that, like us, medieval people simply enjoyed laughing at the ridiculous—and what could be more ridiculous than a man covered in penises? 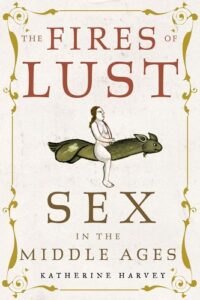 Excerpted from The Fires of Lust: Sex in the Middle Ages by Katherine Harvey. Copyright © 2022. Available from Reaktion Books.

Dr. Katherine Harvey is a medieval historian based at Birkbeck, University of London. She is the author of The Fires of Lust: Sex in the Middle Ages (Reaktion, 2021), a Sunday Times Paperback of the Week. Her writing has appeared in publications including BBC History Magazine, History Today, the Sunday Times, the Times Literary Supplement, and The Atlantic. 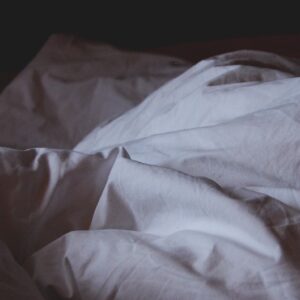 My clearest memory of my freshman year of college takes place in the emergency room of Brigham and Women’s Hospital in Boston,...
© LitHub
Back to top
Loading Comments...