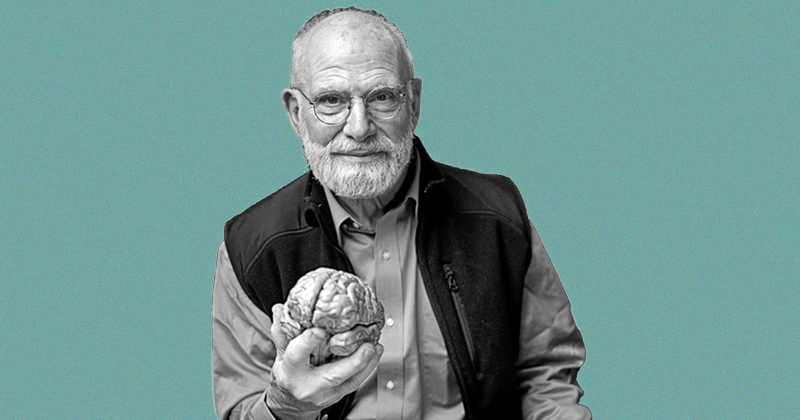 A Lifetime of Reading Oliver Sacks, Before and After My Diagnosis

On Finding Comfort in the Science of the Brain

My neurologist is a man named Quill. When I think of him, I often picture him in a small, still room sat behind a round, highly polished wooden table. It’s a comfortable kind of set-up: the room is lit by soft summer light through the windows and warmed by the friendly urban hum of distant traffic. The wooden table is made glossy by time and use, a dark red wood with a lovely shine to it, and on its surface are what look like scattered fragments of rock. These are the elements—dusty lumps of tin, curling twills of gold and intricate little Aztec temples of bismuth covered with that oily bismuth sheen. A man and his trinkets: it is a pleasant scene to contemplate. And it is a fabrication.

The neurologist comes from my own experiences as a patient over the last few years. Dr. Quill is the man who diagnosed me with multiple sclerosis in 2014. He is a private man, I sense whenever I meet him, a man whose privacy I worry I have shredded in an article for the New Statesman and a subsequent memoir in which I recount my journey through diagnosis and towards an inchoate understanding of what this unpredictable disease means for me. The periodic table, however, comes from somewhere else. It comes from Oliver Sacks, and a passage in his book, Gratitude, published after his death, in which he talks about his lifelong habit of comparing his age to its equivalent element, and then takes us through his personal collection of rocks and nuggets and chunks of metal, kept on its own periodic table in New York.

It is little wonder that these things mingle. I had Oliver Sacks long before I had my own neurologist—long before I had any urgent need for one. Sacks’s books were a presence on my father’s shelves when I was young, their wonderfully puzzling titles—Seeing Voices, Migraine, The Man who Mistook his Wife for a Hat—rubbing up against lurid 70s editions of Freud. Later, when I met the woman I would marry, binge-watching box sets of House together lead me back, via neurological quirks served up as plot devices, to those same books that had always, thanks to Dad’s bookshelves, been part of my mental world. One long winter the best part of a decade ago, I bought and read my own copies. I read about the painter who watched as color drained from his vision, the hippie whose memories of a Grateful Dead concert would fade mere hours after he returned home, and the surgeon who had Tourette’s—this last one a beautifully controlled piece of writing that fairly vibrates with tension while remaining entirely empathetic.

In books like The Man who Mistook his Wife for a Hat and An Anthropologist on Mars, Sacks aimed to carry on the 19th-century tradition of “richly human clinical tales,” as he put it. Reading him for the first time was a revelation: a revelation that the peculiar nature of our consciousness means that we all sit, I think, somewhere deep within our own brains, and we peer out at the world in ways that are mediated by these brains. Occasionally, Sacks’s mix of acuity and empathy—the thrill of heightened perception that lurks in his work, in his poetry of precision—would lead me elsewhere in the literature of neurology: aphasias, agraphias, tumors, and grand mal seizures. I read quite a lot. And then I got sick. And at that point I wondered if neurology was something I particularly wanted to read about ever again.

In truth, I read about it even more after my diagnosis, but it was unhappy reading for the most part, desperate and fatalistic. I read morbidly and unhealthily, storing up new fears and new certainties with each book.

Sacks, however, was different. Reading Sacks remains a comfort. His patient histories are calming in the same way a meeting with my own neurologist can be calming—a moment of simple connection away from the tests and the treatment plans. When I read Sacks as a person with a neurological illness, he feels like he is on my side. I feel the weight of his human interest as well as his compassion.

And that interest is a crucial part of the overall effect. Sacks has been criticized over the years for writing about his patients—criticized, I think, by those who suggest he was sometimes a better writer than a doctor. But post-diagnosis I began to feel that there was something uniquely generous in his work, a message I had only recently been able to tune into. In my first few confused weeks with MS, Sacks gave me the freedom to find my predicament interesting as well as frightening—and I did not always feel this freedom very naturally in hospital waiting rooms or queueing for a blood test. Sacks suggests—and it still feels blasphemous or at the very least foolish to say this—that illness, even a very grave illness, is part of the adventure of being alive.

“Did knowledge of Sacks’s writing unconsciously encourage me to make more of a narrative of my experiences, to make me feel they were more singular and striking than they actually were?”

I have suspected at times that it is dangerous and indulgent and cruel for a person to find their own illness interesting. I have worried that it belittles the suffering of others or that—and I say this with the bright superstition of the newly diagnosed—it magically invites further misfortune.

It was a relief in this regard to find in Sacks a man who simply cannot stop himself, who is ceaselessly drawn in by a need to help, certainly, but also to understand, to aid a patient in making sense of themselves, and in seeing their own experiences as valuable.

This week I reread what is probably Sacks’s most famous story: the story of Dr. P., a musician whose visual agnosia robs him of the emotional context of the world around him, leaving him in an abstract limbo in which, yes, his wife might be a hat, and a glove might be a container “for coins of five sizes.” I realized for the first time what a zip Sacks gives the narrative. His details are precise, but his tone is alive to things that seem, on occasion, quietly undoctorly. Or maybe it’s simply that at times his tone belongs to a very different doctor. There is something of Dr. Seuss to an instant in which Dr. P. fails to recognize his own shoe:

“Help you put on your shoe.”

Did I mishear? Did he mis-see?

Sacks gives Dr. P. more than his dignity in this episode. He gives him his vitality, he captures the quickness and wit and flight of his mind, even compromised as it is.

At times, Sacks has actually been useful to me in a clinical sense. Early on in my own illness I found myself growing clumsy, missing door handles and light switches when reaching for them, spiking myself on pen nibs and cutlery. If I did not look at my legs for a while I would often discover, upon glancing down, that they were not quite where I had left them.

This sort of experience is tricky to explain to others—it is for me only the very faintest of suspicions that something is wrong, and I found that it can feel oddly shaming to admit that you lose track of your feet now and then. Luckily, Sacks’s story “The Disembodied Lady” offers a beautiful, if terrifying, description of proprioception, the body’s “secret” sense of its position from one moment to the next. It was helpful to recognize elements of my own experience while reading of Christina, a young computer programmer who loses her proprioceptive abilities while preparing for a routine surgery. Shamefully, it was even helpful to be able to understand that my own deficit was relatively mild in comparison. Sacks’s work is full of this sort of assistance: it was strangely reassuring to discover elsewhere that I had independently settled on the same word—hollowing—that Sacks sometimes uses to describe certain effects of neurological disease on the personality, even if his own cases are far more severe.

That sense of reassurance. I have often wondered whether my appreciation for Sacks’s work has unconsciously shaped my own experience of neurological disease, the way a friend’s work trip to Tokyo, for example, was shaped and quietly confined by a viewing of Lost in Translation beforehand. Did knowledge of Sacks’s writing unconsciously encourage me to make more of a narrative of my experiences, to make me feel they were more singular and striking than they actually were?

In truth, I suspect that Sacks’s work may have had a quieting effect. Not only do his stories put the relatively mild incursions of MS I felt in my early years of the illness in context, they may have imposed on me the desire to be more like the stoical players in his surprisingly polite medical dramas. Whenever possible, at least.

The strangest thing is that I think I used to read Sacks’s books to understand more about his patients. Now I am a patient too, I seem to read them for the glimpses of Sacks himself that they provide. The reason I hunt for him in details—he buys “an extravagant red rose” for his buttonhole before visiting Dr. P., he keeps track of his daily mis-hearings in a notebook labeled “Paracuses” in one of his last articles for the New York Times—is the same reason I would never read his memoirs. That would feel too intrusive, and a quick Google reveals he was gloriously and perhaps bewilderingly multifaceted anyway—impossible to capture in totality.

I prefer, instead, to see him the way his patients might have seen him—in brief, fascinating moments during consultations. There is a great writability to doctors—a fierce, expansive writability, second only, I would imagine, to that of therapists. Sacks and his colleagues come into our lives and reorient us, if they can. And then they back away again and disappear.

Christian Donlan is an award-winning journalist whose work has appeared in The New Statesman, Edge Magazine, and Vice, among other places. He is the author of The Inward Empire. He was born in the US but now lives in Brighton with his family. 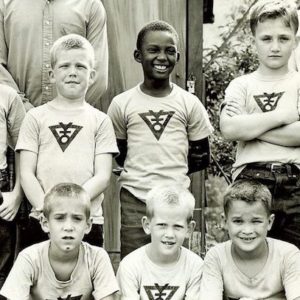 Camp II is the hardest. The week comes halfway through the camp season when our counselors’ reserves are at their lowest....
© LitHub
Back to top