A Last Goodbye to BookCourt

Now that 2017 is here in all its brute force, I’ve had a little more than a week to sit with what it means that BookCourt has closed. In the weeks leading up to the store’s final day of business, someone told me that BookCourt had been mother’s milk for him and his whole family. As the former events coordinator at BookCourt, I heard a lot of things like this in those final weeks of the year. Looking back, I think the quality, more than any other, that made it so special was the fact that it was so many things to so many people. Still, that notion of mother’s milk has stuck with me.

Fresh out of a small liberal arts college in Southern Indiana, I moved across the country to New York. I had a folksy accent and a how-do-you-do work ethic in a city infamous for its grind and one that’s just downright awful to Midwesterners like me. I had no business lasting more than a few days. Somehow, thank God, I found BookCourt and, to steal a phrase, it was mother’s milk.

I cut my teeth there. I learned to walk and talk like a New Yorker there. I had my heart broken there. I fell in love there. I became who I am from day after week after month after year serving one of the great staples of literary New York.

I couldn’t tell you exactly how circumstances came that I should be let in charge of booking events at BookCourt, but it happened one day. So, for three years I was underpaid and overworked to a degree I don’t think I could ever repeat and enjoyed every minute of it.

From Jacqueline Woodson’s launch of Another Brooklyn to Junot Diaz reading This is How You Lose Her to the Whiting Award readings, and hundreds more, every night of the week, you could come to BookCourt and you could take part in something that needed all of us and was bigger than any one of us. It was like we were all the same when we walked through that old wood door. We were coming home to something, finding community and understanding. It was mother’s milk.

There is a prestigious list of authors who have graduated out of BookCourt: Emma Straub, Martha Southgate, Adam Wilson, Todd Colby and maybe a dozen more. Garth Risk Hallberg hung around enough to have practically worked there. So did Justin Taylor, when he was on the East Coast. You could sometimes find Martin Amis, between novels, scanning the shelves. The same with Joshua Cohen. Julia Fierro, Jonathan Lethem, Miranda Beverly-Whittemore, Emma Cline, and so many others came and found nourishment in its scuffed-up floors, its hand-me-down counters, those no-frills bookcases.

It was understated. As Lethem once said, “It [was] a university. A party in slow motion.” Sure, there were times like when Robin Williams burst in and shouted, “I fucking love bookstores.” But most of what I will remember are the subtle, uninteresting, innocuous moments: Garrison Keillor browsing the stacks before his event, seemingly oblivious to the fans who had come to see him. Ethan Hawke asking Jonathan Lethem for a mystery recommendation. Emma Straub teaching me how to ring up a cash sale versus a credit card sale. Hilton Als sitting on a church pew, half-dead with the flu, and somehow still holding court, speaking in those same cadent and lyrical sentences he writes in. Everyone I talk to has small, unremarkable memories just like these. Now that BookCourt is gone, it feels so much harder to give them value without just saying, you had to of been there.

Nothing else will ever be as sweet as those years and that store. I’m a blip in a long history and I join an even longer list of people when I say that I owe so much to BookCourt. I guess it’s somehow fitting that of all that we lost in 2016 the last thing to go was the mother’s milk.

Thank you, BookCourt. I will miss you.

Andrew Unger is the former events coordinator at BookCourt.

See Photos From the Writers Resist Flagship Event in NYC 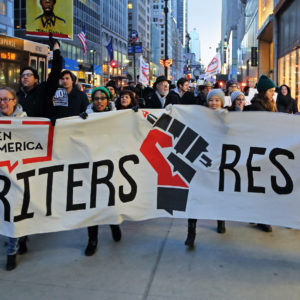 See Photos From the Writers Resist Flagship Event in NYC

If you're reading this space, chances are you've heard of Writers Resist (soon to become Write Our Democracy), which held...
© LitHub
Back to top