A Gripping Performance of “Of Mice and Men,” Behind Bars

Inside Sing Sing's Production of the John Steinbeck Classic

By Daniel A. Gross

Around 5 o’clock on a warm May evening, guests started lining up in Ossining, New York, for the closing performance of a new production of John Steinbeck’s “Of Mice and Men.” But before they could enter the theater, they had to hand over their phones, remove their shoes, and walk through a metal detector, like travelers embarking on a long flight. A guard stamped their right hands with ultraviolet ink, led them into a room with bars on the doors, and locked the door behind them.

After a moment, another guard unlocked a second door, and the guests were finally ushered into the visitor room of Sing Sing Correctional Facility.

In many respects, the space resembled any community theater, with a couple hundred chairs lined up around a simple black stage. But Sing Sing is a maximum-security prison, so coils of razor wire were visible through the windows. Prison-issue green pants separated the incarcerated from the guests. Correctional officers stood watch, handcuffs and batons strapped to their waists. 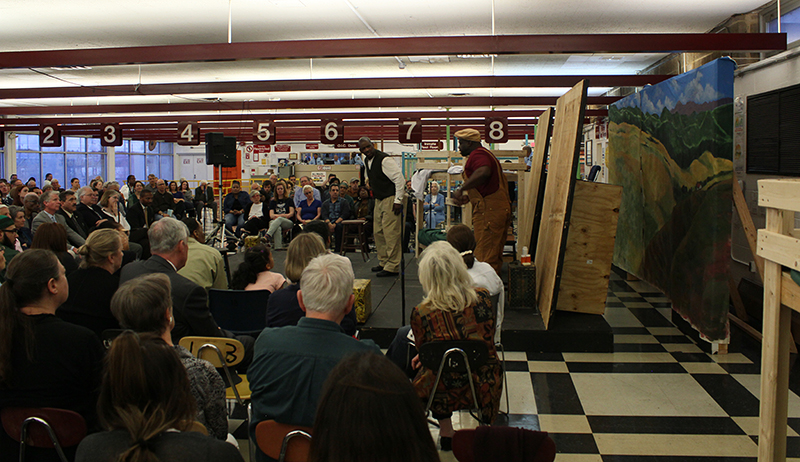 Incarcerated members of Rehabilitation Through the Arts perform “Of Mice and Men” for
visitors to Sing Sing Correctional Facility, on Friday, May 11. Photo by Daniel A. Gross.

Once a year, a few dozen Sing Sing inmates put on a play inside the prison, in partnership with the nonprofit Rehabilitation Through the Arts. RTA, which was founded in 1996 by Katherine Vockins, started in Sing Sing but now organizes acting workshops and plays in five state prisons. This time around, Sing Sing prisoners had chosen “Of Mice and Men,” a play that Steinbeck adapted from his novella about two farm workers, George and Lennie, who struggle to survive in Depression-era California. Behind the stage, a billboard-sized backdrop showed golden hills, deep green trees, and a bright blue sky.

I entered the prison with Charles Moore, the only man who has not only co-produced a play inside Sing Sing, but also served time there. After earning parole in 2016, Moore was offered a job with RTA. “I wore that green outfit for seventeen years,” Moore told me. “That speaks for itself.” Though he now dressed in neatly-pressed slacks and shiny shoes, prisoners saw themselves in him. “I was happy to see him as a civilian,” Dario Peña, one of Moore’s incarcerated friends, told me in a letter. “But I was even more proud and impressed that he was here to give back.”

“Before they could enter the theater, guests had to hand over their phones, remove their shoes, and walk through a metal detector, like travelers embarking on a long flight.”

Minutes after our arrival, a correctional officer announced the afternoon count: everyone wearing green had to line up against the window, while visitors, in their street clothes, could wait on the other side of the room. For a moment, the privilege of our freedom, of not being counted and confined, was stark. Then the actors and stage hands were released back to the set, and for the hours that followed, the differences between prisoners and guests seemed to recede. A few men on cafeteria duty handed out plates of Ritz crackers, cheese cubes, and coffee cake. The men in green were joined by proud loved ones, and the audience grew to a couple hundred people, including New York’s highest-ranking prison official, Anthony J. Annucci, and staffers of Senator Cory Booker.

At 6:30, the guests took their seats. There were no curtains to fall or lights to dim: the stage was illuminated only by florescent bulbs and natural light from the windows. Lennie, played by Timmy Lee Walker, lumbered onto the stage with his protective friend George, played by Chaymarl Cormier. Both men are African American; other than Dawn McDonald, who commuted to the prison for the only female role, all the actors—like the majority of incarcerated people in New York—were black or Latino. 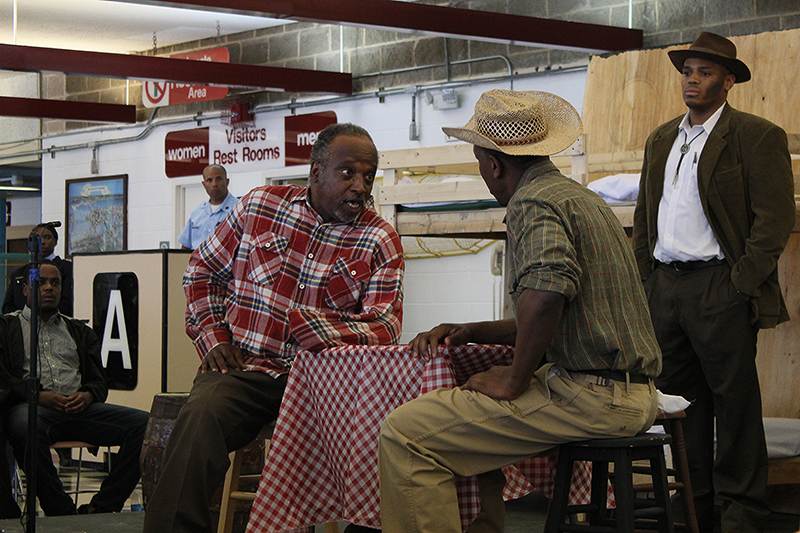 Candy (at left, played by Gary Stewart) talks to George (Chaymarl Cormier),
while the Boss (Dennis Woodbine) looks on. Photo by Daniel A. Gross.

In overalls and straw hats, looking like rural folk, Lennie and George knelt on the edge of the stage, as though it were the bank of the Salinas River.

At first, George scolded Lennie for accidentally killing a mouse. But then his thoughts turned to the hard week of work ahead, lifting heavy bags of grain, and his voice softened. “We’re gonna sleep out here tonight,” he told Lennie, sounding like a man trying to transcend his circumstances. “Tonight I’m gonna lay right here an’ look up! Tonight there ain’t a grain bag or a boss in the world.”

If theater is an escape from everyday life, then life in prison lends new significance to theater: escape is what many incarcerated men yearn for. When Charles Moore arrived at Sing Sing, he had been sentenced to seventeen years to life for second-degree murder. He was in a deep depression. “I didn’t have any understanding of prison life. I didn’t know if I could make it,” he told me. “Suicide was a thought.” Years passed before he started to perceive beauty within the walls.

Moore has a thin mustache, dark brown eyes, and a furrowed forehead. He was born in Memphis, but his mother was murdered when he was three; he was raised by his aunt and uncle in Buffalo, New York. He told me that as a teenager, he left home after being molested by his uncle. Though he was elected class president of his high school, he never graduated, and in his early twenties, he began drinking heavily and using crack cocaine.

The first play that Moore remembers attending, three decades ago at a small Buffalo theater, was about the HIV/AIDS epidemic. It made a lasting impression—one of his friends played a man who was dying of the disease—but he never expected to participate in something like that. Then, when Moore was thirty-four, he got into a fight that turned ugly. “I got into a struggle with someone, and they lost their life,” he told me. “I committed one of the ultimate sins.” He realized later that he had inflicted on others the same pain he felt, from losing his mother.

“It made me feel that I was needed again. Because for a lot of years, I thought that for what I did, nobody would ever need me again.”

In Sing Sing, Moore spent a few years focused on school and the church before he encountered Rehabilitation Through the Arts. In the mid-2000s, he went to see “A Few Good Men,” about military lawyers who defend two Marines accused of murder. “You would do things to get out of your cell,” Moore recalled. The actors, in military uniforms, looked so professional that he assumed they had come in from the outside—until he bumped into one inside the prison. After that, he signed up for an RTA production of “Jitney,” which is set in a Pittsburgh taxi station.

Moore owned an electric keyboard that could play sound effects, so he was cast in the off-stage role of the telephone. Laughing at the memory, he told me that the director, Joanna Chan, said his role was crucial—the telephone drove the action in the play. “It made me feel that I was needed again,” Moore told me. “Because for a lot of years, I thought that for what I did, nobody would ever need me again.” In the years that followed, he remembers almost looking forward to returning to his cell, so he could read scripts and practice lines. He could relate to tragedies, but he also came to love comedies. “It’s so refreshing to laugh in prison,” he said.

When Moore was paroled in 2016, he immediately decided that he wanted to return to prisons as a volunteer—“to let brothers and sisters know that you can make it after incarceration.” When he arrived at Sing Sing for the final night of “Of Mice and Men,” he gave his name to a correctional officer. “We know who you are, Mr. Moore,” he said, and waved him inside.

In prison, inmates are always carefully surveilled, but on this night, they were seen. At times, it seemed possible to forget where we were. “When you come in here, it’s not about what you’re locked up for,” Jonathan Andujar, a clean-cut actor who played a farm laborer named Carlson, told me. “When you get on this stage, you’re a completely different person.”

While the play progressed, the sun began to set outside. From the stage, the actors could look through the window and see the light fading over the Hudson River, creating an effect that was, surprisingly, pretty much what Steinbeck intended. “A sandy bank of the Salinas River sheltered with willows,” he wrote in the stage directions for the play. “Stage is lit by a setting sun.” 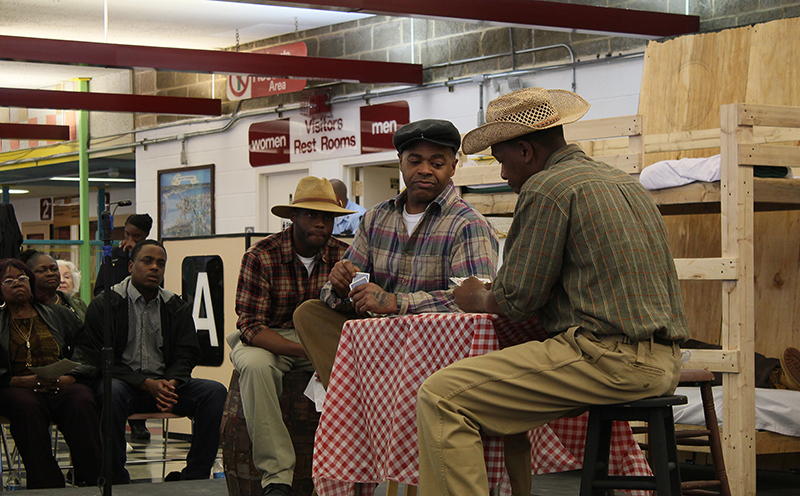 A card game between George and Whit (played by Floyd Lindsey), with
Slim (Dayvon Underdue) in the background. Photo by Daniel A. Gross.

Many times in “Of Mice and Men,” George and Lennie dream aloud about owning a farm. Lennie wants to tend rabbits, and George wants to live off the fat of the land. But Lennie, a giant of a man with a mental disability, gets them both into trouble by underestimating his own strength. When he accidentally takes a life, George is faced with a terrible choice, and in the final, wrenching scene, the dream finally eludes them.

At the end of the play, the sound of a gunshot rang out in the visitor room. Some audience members gasped when they heard it. Others sat in stunned silence, before finally standing and applauding. In letters, prisoners described a similar reaction at previous performances of the play, which only inmates could attend.

“I cried that night,” Jose Llaca, who is serving a 116-year sentence for gang-related murders, told me. 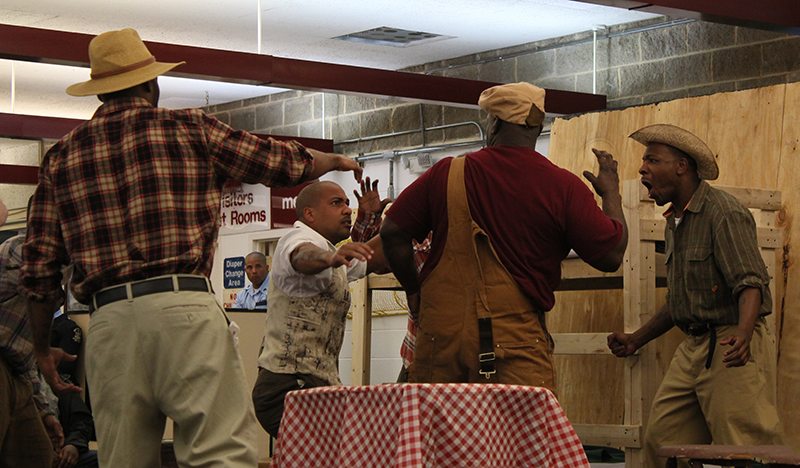 George (at right) tells Lennie to fight back after Curley (second from left,
played by Joel Hererra) threatens him. Photo by Daniel A. Gross.

I asked participants whether that final moment in the play, the gunshot that destroys a dream, had a special meaning in prison. Walker said it reminded him of the moment when an appeal is denied, and hopes of freedom slip away. But most compared it to the sight of the Hudson River. In rehearsals, Nelson T. Eusebio III, who directed the play for RTA, would point at the view and tell inmates: “That’s what the fat of the land feels like.”

“A friend of mine once described this view as sweet torture,” Laron Rogers, a stage hand, told me. He gazed through the glass, past the razor wire and concrete walls, at the wooded hills on the other side of the river. “It’s just out of reach.”

Daniel A. Gross is a writer and public radio producer. He's written for The Washington Post, The Guardian, and the website of the New Yorker. His radio stories have aired on NPR's All Things Considered, Radiotopia's Criminal, and the BBC World Service. He tweets @readwriteradio.

Read 13 of the Best Literary Interviews from Interview 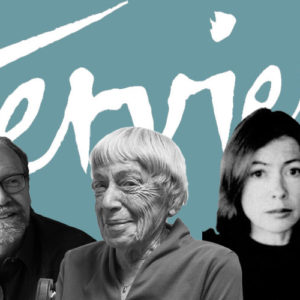 Read 13 of the Best Literary Interviews from Interview This week, employees of Interview magazine, the legendary the arts and culture publication founded in 1969 by Andy Warhol,...
© LitHub
Back to top
Loading Comments...