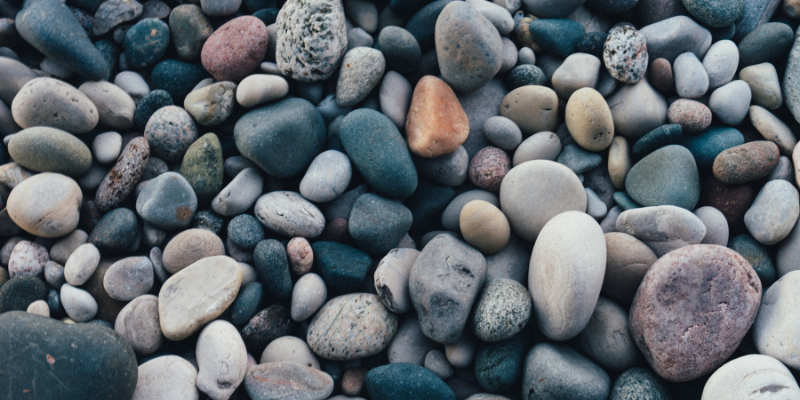 A Gathering of Stones: Aimee Bender on the Earth’s Best Secret-Keepers

“I felt a kinship with the stones.”

My father shakes his head when he tells this story. It contains so much for him. If you had a problem in his family, he explains, when he was a child, his Baba Esther instructed them to tell it to a stone. He laughs a little. “Can you believe it? This was the only way to talk about things.” He became, fittingly, a child psychiatrist, and then a psychoanalyst, but not the stone-like silent kind—the interactive kind, one who responds, engages.

And while I have reaped the benefits of having a father who values talking about hard stuff, I still find myself circling this story, around my great-grandmother, and her peculiar advice. Because they do call to me, the stones. They may not be good confidantes, but I am, without a doubt, pulled to them—both on the page, and real.

First: they’re all over the books. There’s Beckett’s Molloy and his abiding love of “sucking stones” which he keeps meticulously in various pockets, ready to pop into his mouth. In poet Szymborska’s “Conversation with a Stone” she tries to make some headway getting to know one: “I knock at the stone’s front door…” she writes, yearning to grasp its unknowable internal life.

Nakata in Murakami’s novel Kafka on the Shore has a gift of talking to things that cannot communicate in our human ways: “I used to talk with cats all the time, but I’ve never spoken to a stone,” he explains, as he considers how best to go about this most solemn activity. His quest links right up with the man in Annie Dillard’s seminal essay, “Teaching a Stone to Talk,” who is also trying to listen that deeply, to coax something mysterious from a stone, and although the neighbors do not know exactly the nature of his project, “I wish him well,” says Dillard. “It is a noble work, and beats, from any angle, selling shoes.”

I think it might actually be because they seem to hold secrets. Things whispered to them, deep from the earth, secrets of the earth itself.

Louise Erdrich’s recent short story, “The Stone,” describes a young girl whose primary relationship happens to be with one—“in the most difficult of times, to calm herself, she would take the stone into the bathroom with her and set it on the edge of the tub while she soaked.” The human characters are important, yes, but the dramatic peak to me instead occurs when Erdrich envisions the stone’s long history, its voyage through time: “rolled smooth by water and the action of sand … shoved off a dock, lifted back up with a shovel, deposited in a heap.” The stone’s account shoves the human one aside, and in doing so, adjusts our perspective entirely.

I love to read about them so much. Even the word stone comforts me as much as the object itself.

“A little pebble in your mouth,” explains Molloy, “round and smooth, appeases, soothes…”

But the object, too, beckons.

This whole topic came up in my mind recently because our house is covered in stones. I’m not a naturally good housekeeper anyway, and now there are two children in the mix, and they, like many children, are drawn to rocks and stones, and bring them home from pretty much everywhere we go, and the problem is that I like them too.

There are piles of stones on the coffee table, the dining room table, the ledges. In spring of the first year of the pandemic, I gave the main kitchen counter a good de-cluttering, affording us more cutting and cooking space, and amongst the stray spice jars and recipe clippings crowding the surface, I found a container of stones, a full jar. As if we were making stone soup, for real.

In a pail in the living room are a few river rocks from my parents’ collection, because my mother has the same proclivity, and strewn on shelves are colorful tumbled ones from the Natural History Museum trough where you can run hands through piles and pay a fee to fill a velveteen bag. On my dresser is a very small stone, almost skull-shaped, clear and streaked with red, punctuated by a black point at the tip, and this one I have carried with me dutifully from every place I have ever lived because even though I have done years of therapy to unhook my debilitating magical thinking from the way I act in the world, I still seem to believe there’s something special about this one.

Our neighbors made a plan to redo their lawn, and it had been paved, in part, with pleasing flat ovular gray stones that the kids coveted, and before the landscapers came, I got a text—if your kids want some before tomorrow come on by, take as many as you want! Well. So now we have at least twelve of those.

I felt a kinship with the stones. I probably would not tell my secrets to them, no. But I might be one, pretend to be.

There is little conflict about their abundance; my husband doesn’t mind, doesn’t track objects the way I do, and I am too charmed to do whatever one might do to get rid of a stone. Which is just to put them outside. A stone never belongs in a trashcan. I pass the collections often, and consider their place in the house, and decide, once again, that they deserve to stay.

I think it might actually be because they seem to hold secrets. Things whispered to them, deep from the earth, secrets of the earth itself. They seem to reassure. They speak of time.

“You may get to know me,” reminds Szymborska’s stone, “but you’ll never know me through.”

Comedian Donni Saphire captured it in a tweet, early on in the pandemic: “Things will be fine,” he wrote, “eventually, in thousands of years, for rocks.”

And Erdrich murmurs this jewel deep inside the center of her story: “A stone is a thought that the earth develops over inhuman time.”

Quiet and constant, crust of the earth that will outlive us all, except they don’t live, that are moving along in their own elephantine processes, that we can hold in our hands anyway.

For my father, a stone became the symbol of a family that did not talk, that kept emotions too private and repressed, and he keenly felt the cost of this. He liberated generations, really, by deciding that speaking one’s feelings to another was a wholly different way to live in the world.

When he became a father, he made a point to ask his three daughters questions, to listen when we were having a tough time, to speak honestly of his own struggles with career decisions, with dating complexities. It’s beautiful to me, what he put into motion, and I have soaked up the benefits of his growth in innumerable ways, but it’s funny how things play out; I am still not always the best at talking. I prefer to sit back, or I certainly did as a child. When asked about my day around the dinner table, I always said things were fine, even when they were not, because I had no idea how to articulate my own experience, how to capture the nuance of any upset that wasn’t obvious. He was there to listen, but I didn’t particularly want to speak. I felt a kinship with the stones. I probably would not tell my secrets to them, no. But I might be one, pretend to be.

Because they do call to me, the stones. They may not be good confidantes, but I am, without a doubt, pulled to them—both on the page, and real.

Maybe someone would whisper their secrets to me.

I never knew this Baba Esther. She was apparently a tiny round woman who lived mostly in Minneapolis, the matriarch of seven daughters, who gave my father a sugar cube to suck on when he visited.

In general, I’ve considered her one of the repressive forces of the extended family, but as I write this, I wonder: was her advice possibly a first step? “If you have a problem, tell it to a stone.” She didn’t say, “don’t have that feeling, don’t speak a word, push it all down and away.” She couldn’t make the crucial leap to talking to another person, no. But to tell a stone is still to tell.

In Sarah Shun-lien Bynum’s short story, “Likes,” a father is unsure how to engage his teenage daughter who won’t talk to him. One afternoon, driving her to her physical therapy appointment, he tries a new tack: “the dad said carefully, ‘I’m not going to look at you. I’m not going to say anything. I’m just going to keep my eyes on the road. I’m going to keep driving, and, when you’re ready, you say whatever you want.’”

The daughter is intrigued, and it works, what he sets up, to some degree, which I found very moving. In fact, I wanted to try it out myself. My own 8-year-old daughter is very alert to the reactions of her eager, interested parents, so the next time she was hesitant to say something possibly embarrassing or vulnerable with me that she also seemed to want to share, I took a cue from the dad in Bynum’s story and said the same thing—that I wouldn’t respond if that might be helpful. “I won’t change my face,” I promised her. “I won’t say a word.”

Was I, without realizing it, becoming the stone Baba Esther recommended? For a moment? An antidote to the overreaction, the flood of sympathy and advice that can spill from me that is often far too much?

Thank you, Sarah Shun-lien Bynum! Now my daughter asks for it directly: “You cannot move your face AT ALL,” she’ll command, sternly. “You cannot even grunt.”

As she tells me whatever she wants to tell me, I sit, stony-faced. Silent. And then there’s usually a pause.

“You can respond now,” she says.

Aimee Bender is the author of The Girl in the Flammable Skirt, An Invisible Sign of My Own, Willful Creatures, The Particular Sadness of Lemon Cake, The Color Master, and most recently, TheButterfly Lampshade, longlisted for the PEN/Jean Stein Award. Hershort fiction has appeared in Granta, GQ, Harper’s, Tin House, McSweeney’s, and the Paris Review, among other publications, and her work has been translated into sixteen languages.

The Pain-Writing-Money Trifecta: On Nora Ephron and Grief as Copy 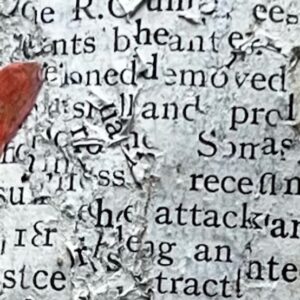 The following talk was delivered at the Bennington Writing Seminars Commencement Address on June 11, 2022. * Photos...
© LitHub
Back to top