“A Catalogue of Small Pains” 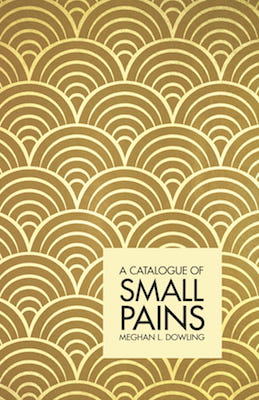 The following is from Meghan Dowling's debut novel, A Catalogue of Small Pains, winner of the University of New Orleans Press Publishing Lab Prize. The book—composed of vignettes, illustrations and instructions on how to live as an "ideal" American woman—tells the stories of three generations of women whose lives are overshadowed by a cruel family patriarch. Here, a young woman named Agnes begins to discover the pleasures and anxieties of her own womanhood.

Agnes sat in the kitchen stringing beans, her skirt hiked up, the large aluminum bowl balanced between her shaking knees.

Her belly squeezed in rolling waves, a gnawing hurt that radiated into the space beneath her ribs and down deep into her thighbones. Convinced she was about to mess herself, she shifted the bowl to the table and pulled her body up, an older woman suddenly, grunting as she rose. A thick wet coolness on her skin upon standing, from where heavy fabrics flapped against her buttocks and clung. A flood of panic, that she had messed herself already, she turned to see the small dark smears on her chair seat. It was not a foul latrine-smell that had come out of her but an odor of coppery mud. A queasy feeling, her belly pulling inside itself, a hot stickiness between her legs. Blackened red drips formed small pools beneath her; more came down her leg and into the arch of her left shoe.

Her mother stumbled through the doorway and braced herself on the counter with one arm, held still to take in the sight of the floor, the chair, of Agnes’s bewildered paleness. She lurched toward Agnes and seized her wrist, spun the girl around to witness the dark stain soaking the back of her. Red-faced and sweaty, Mumma dragged Agnes by the arm, tearing across the parlor and upstairs to the washroom. Mumma shoved her into the deep tub and began to undress her quickly and roughly, whacking Agnes on the arms as she wrestled the blouse off, and on the legs as she yanked her free of the ruined skirt and turned on the taps. Agnes shivered in her thin wet slip, her shoes bobbing next to her, the clothing a soggy clot in the far end of the tub.

Mumma sobbed into Agnes’s neck as she squeezed her, petting her hair. My baby, cursed for a woman, she moaned. My baby girl.

But as Agnes tried to make up her mind whether to squeeze her mother back or not, the moment passed. Straightening, Mumma wiped her eyes and stood, told Agnes: Wait here, and returned with a bag of cloth-scraps. Inside Agnes recognized one of Lillian’s old rompers, a torn undershirt of their father’s. These go in there, her mother said, nodding first at the scraps and then toward the place from which blood flowed and had begun to tinge the bathwater. Clean yourself, Mumma said and left the room.

When it was Mary’s turn, then Ethel’s, then Lillian’s, Agnes described the gnawing hurt. She told them: Come to me and only me when it begins. For each girl a proper sanitary belt and rubber apron from the chemist’s shop. Packets of cellulose towels: forty cents a dozen.

The boys got jobs in the shoe factory, at the foundry, packing and unpacking crates in the warehouses on Rowes Wharf. Their father made the boys fight him in the front yard, stripped down to his trousers and undershirt. He did not relent until there was a forfeit. The boys learned that this meant a hand waved, a cheek pressed into the dirt. What will the neighbors think? Mumma cried. Pa said: That a man lives here.

His girls chose between secretarial school and the teaching college, or learned nursing from the Sisters of Charity. His girls worked part time while they attended school: Agnes as a waitress in the diner on Tremont, Ethel at the newsstand, and Lillian as a clerk at the dry goods. Mary worked behind a counter at Jordan Marsh but spent most of her time there applying lipstick and smoking in the storeroom.

A married daughter is of no use to me, Pa said. The boys who married brought their wives to live at the house in Somerville. Babies began to pile up in every room.

An orphan named Gene made his way north from Virginia. He flipped sizzled patties at the diner on Tremont where Agnes poured coffee for pennies. She attended women’s college in the city. What the hell possessed you to marry him in the first place, Ma? But Agnes was tight-lipped. Later, in the nursing home, she told me: “That was just what you did in those days. If you were a good girl, that is, not a whore.”

Gene’s dark hair was smoothed back and high-shined, his voice a long drawl, deep and grainy like nothing Agnes had heard before and her name, the sharp nasal ugliness of it that she was used to hearing, was softer in his mouth. He moved slowly and deliberately. When he reached for the saltshaker on the shelf behind her his arm brushed past her ear, the fabric of his shirtfront barely touched the pinafore apron covering her chest, his clean-shaven jaw at her temple, a faint smell of spiced orange and tobacco. And when she did not move away, he leaned into her, lightly crushing the starched pinafore and her body beneath it. His hips slid, pressing hers into the counter. He tilted his head and she could feel the slight roughness of his skin against her cheek as he said: A good girl like you needs to say she’s going somewhere respectable so tell your daddy that’s how I’m gonna take you.

For their first date Gene brought Agnes to Scollay Square, a neighborhood forbidden by her mother. They began at Barcone’s, a dimly lit place built like a railroad car, a strip of pool tables down one side and rough gouged bar down the other. Gene pulled out Agnes’s barstool with a flourish and ordered himself a bourbon. What’ll you have? he said and she asked for ginger ale. I don’t drink. At this Gene fanned his hat over his face rapidly and rolled his eyes skyward, pantomiming a wild preacher she had seen once in the pictures that he must have seen too. Good God, girl! he said. Lord amighty! and she began to laugh as he clutched his heart. We’ll have to get you fixed up, he said and laid his hat back down on the bar next to his glass. Gene plugged one end of the stirrer in his drink with an index finger, stopping up the liquid. He winked at her as he dropped it into her ginger ale and mixed it in. Just a touch, he said. Agnes took a sip as pool balls cracked behind them.

Outside they found that night had fallen. Gene told Agnes he wanted to take her “to the Armenian place” before they ate and she did not know what that meant. Around the corner they headed down a flight of stairs to the door guarded by a large man, greasy and fat, who Gene called Sammy and slapped affectionately on the shoulder as the man stepped aside.

“How long since you moved up here?” Agnes said.

“Not long,” Gene said, laughing. The dark entry hall opened into a cavernous network of rooms, the basements of several buildings connected by the large doorways that had been blasted through brick and stone.

“When I was a kid Mama always said we had to clean our plates on account of the starving Armenians,” Gene said. “Looks like these ones’re doing just fine.” A small, wiry man spotted Gene and made a beeline, agitated. His hair was tar black, but he wore the thick push-broom mustache favored by the old men in Agnes’s neighborhood. Gene clasped the man’s thin hand with his two large ones.

“Jamb, you old goat. Where you been hiding yourself?” Gene spoke in his calm meandering way but did not stop long enough to let Jamb get a word in edgewise. “This young lady here’s Agnes, isn’t she pretty? I’ve been showing her all my haunts tonight, all kinds of places a girl like her never sees. I tell you, she doesn’t know if she’s on foot or horseback.” There was a sharp metal glint behind Gene’s easy charm. “Well hey, glad to have run into you, fella. Let’s talk soon.”

Jamb smiled through tight lips and began to nod vigorously but said nothing. Gene took Agnes’s arm and they slipped through the rows of tables rigged for dice and cards that were crowded with men and the bored-looking women, sipping drinks or smoking, who formed broken rings around them.

They ate at a diner that looked much like their own, but the young woman behind the counter was an Italian with olive skin and large brown eyes. They ordered ham sandwiches and Gene peppered Agnes with teasing questions about the music she liked and how many brothers and sisters she had. What about you, Gene? What’s your family like? she asked, and it was then he first told her that he had none.

“Had no brothers and sisters.” Gene fiddled with the scrap of lettuce on his plate. “My mama was a sainted woman and when she died I packed up and left. I don’t know what my daddy was like, except that he was a hero who died in the Great War.”

“You don’t remember your father before he shipped out?”

Gene’s face reddened and his eyes narrowed. He jabbed his finger at Agnes. “I don’t like what you’re implying.” He pulled the paper napkin out of his collar, wadded it and threw it on his plate.

“I said Mama was a sainted woman so you shut your pretty little mouth.”

“Forgive me.” Agnes reached across the table and offered her open palm to him. Gene slid a finger down her wrist and laid his hand on top of hers. He gripped it, and held on until her bones began to ache.

From A Catalogue of Small Pains. Used with permission of University of New Orleans Press. Copyright © 2019 by Meghan Dowling.

Notice Me: How Literary Publicity Works 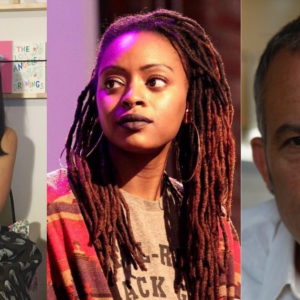 Notice Me: How Literary Publicity Works In this episode of the Fiction/Non/Fiction podcast, publicists and writers Carla Bruce-Eddings and Karen Gu, and novelist...
© LitHub
Back to top