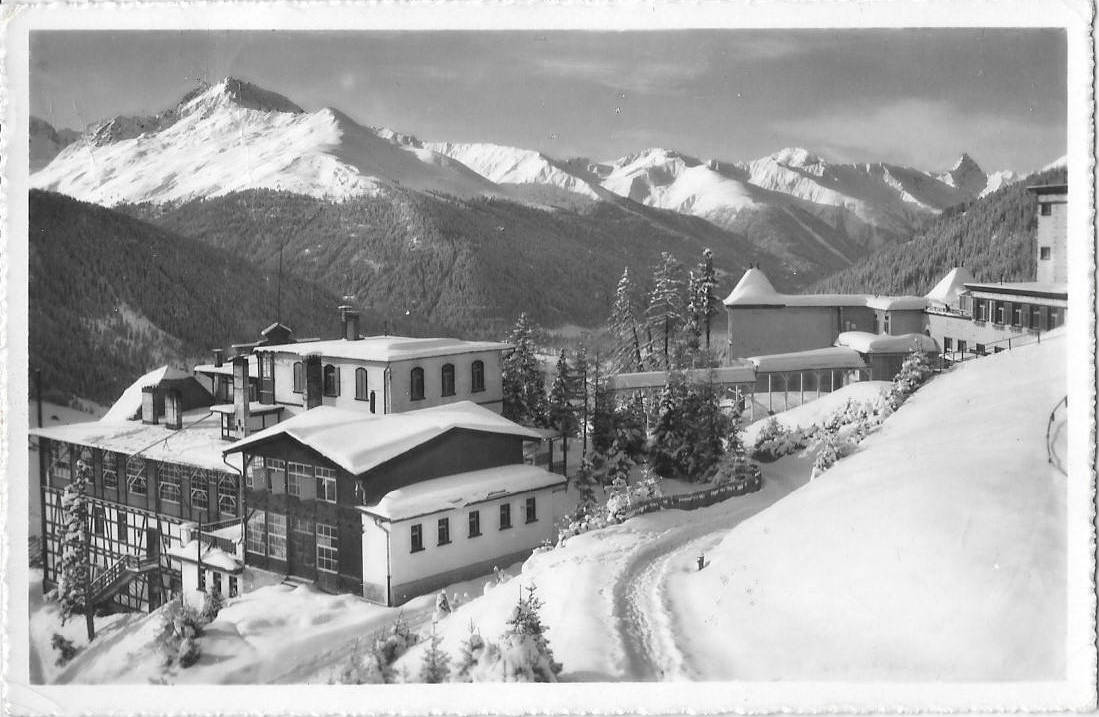 A Brief Literary History of Davos

Where Writer's Block is Cured, if Not Global Misfortune

This week, the world’s economic glitterati have gathered for the World Economic Forum in Davos, a secluded ski resort in the northern Swiss Alps, as they have been doing every January since 1971. For many people, this strange oasis is primarily associated with, and perhaps unfairly reduced to, a ballet of private jets, opaque deals, and big money.

Originally conceived as a bridge between European firms and US management practices by its founder, German economist Klaus Schwab, this elite gathering has been hosting Nobel Laureates in Literature since the end of the 1990s. More than a century before Elie Wiesel, Nadine Gordimer, and Mario Vargas Llosa shook hands with Bill Clinton and George Soros at the Davos Congress Centre, however, it was here that Robert Louis Stevenson overcame his writer’s block and finished Treasure Island; Sir Arthur Conan Doyle started skiing in the Alps; and Thomas Mann thought of the idea for The Magic Mountain. In striking contrast with Davos’s reputation today, the city has played a major role in the history of ideas, be it in the field of medicine or literature, its Alpine air proving oddly inspiring for great thinkers on several occasions.

If it hadn’t been for the intervention of Alexander Spengler, Thomas Mann’s The Magic Mountain might not have been set in a Swiss sanatorium and Robert Louis Stevenson may never have finished Treasure Island. Spengler, a German exile and former revolutionary with a tumultuous political past (rumor had it that he’d been sentenced to death in absentia in his home country) traveled from Zurich to Davos in November 1853 to settle in this poor, isolated hamlet as a country doctor. Perched on the Grison Alps, and consisting of little more than farms, the village had none of Zurich’s intellectual and cultural life; no doubt the good doctor felt homesick at first. However, it is in Davos that Spengler made a life-changing discovery and altered the course of the region’s development and history.

At a time when tuberculosis was responsible for 15 percent of deaths in Switzerland, Spengler was startled to observe how the locals climbed steep mountain paths “without perspiring or becoming breathless.” Incidentally, not one case of tuberculosis was found in the Davos district. Despite the mockery that met his initial idea, Spengler decided to test what would be known as a “winter cure.” His first two patients came to Davos during the winter of 1865 to enjoy the city’s microclimate. After two months, they were both in better shape: the dry air of the highest city in the Alps seemed good enough to cure lung-related diseases.

A decade later, sick, wealthy Europeans were coming from all over the continent to rest in Davos’s chaises longues, receive massages with groundhog’s grease and be prescribed three liters of farm milk to drink every day. Spengler’s partnership with Dutch investor Willem Jan Holsboer enabled him to make his vision for Davos a reality. Together, the two men opened a sanatorium, a hotel and a train line. Davos was quickly equipped with public lighting, a tram, a cinema house, and a skating rink.

A stay in Davos—half miracle cure, half spa resort—was reserved for the happy few. In 1893, Sir Arthur Conan Doyle and his wife Louisa “Touie” Hawkins, who was suffering from tuberculosis, had to sell their house and furniture to be able to spend two months in the town’s sanatoriums. While Touie was being treated, a bored Conan Doyle took up skiing, at a time when few people in the Alps were doing so. In a dispatch for The Strand Magazine, Doyle wrote: “This is not appreciated yet but I am convinced that the time will come when hundreds of Englishmen will come to Switzerland for the ski-ing season.” Wearing a pair of skis shipped from Norway and Harris Tweed that his tailor had mistakenly sworn couldn’t be worn in the snow, Conan Doyle became the first British citizen to cross the Mainfelder Furka pass above Davos on skis. “There is nothing particularly malignant in a pair of ski,” he wrote. “But you put them on, and you turn with a smile to see whether your friends are looking at you, and then the next moment you are boring yourself madly into a snowbank, and kicking frantically with both feet.” At the end of the winter, Touie’s health had greatly improved, while Conan Doyle had inaugurated the trend of alpine skiing.

Sick, wealthy Europeans were coming from all over the continent to rest in Davos’s chaises longues, receive massages with groundhog’s grease and be prescribed three liters of farm milk to drink every day.

Occasionally, Davos’s microclimate proved to be an effective cure for writer’s block as well. A decade before Conan Doyle brought out his skis, Robert Louis Stevenson spent two winters in Davos. In the spring of 1881, he wrote to his close friend Sidney Colvin from the Hotel Belvedere: “I have not, I believe, remained so long in any one place as here in Davos. That tells on my old gipsy nature.” The first winter was harsh; battling with poor health, coughing up blood, he compared the mountain valley to a prison. The death of his friend Fanny Sitwell’s kid, who had also settled in Davos for the season, must have exacerbated these claustrophobic feelings and brought back painful memories—Stevenson’s wife, Fanny Osbourne, had lost her youngest child from a previous marriage a few years before.

Despite the circumstances, Stevenson did manage to write five essays on convalescent life. During their second stay—enlivened by Fanny Osbourne’s middle child, Lloyd, for whom Stevenson had built a toy press in the Chalet am Stein—the exile found inspiration again, which had been lost after he’d written the first 15 chapters of Treasure Island during the previous summer in Scotland. Following his doctor’s recommendation to never exceed three hours of work per day, Stevenson managed to finish the last 14 chapters in under two weeks. The author still pined for “Edinburgh gossip,” but he also marveled at the open sleigh rides through “forests of Christmas trees,” delighted in mornings spent tobogganing and relished the view of pinewood from the chalet, “with the moon upon the snowy mountains, and the lights warmly shining in the village.” In November 1881, Stevenson wrote to his friend and editor W. E. Henley that he should have “a complete proof of Treasure Island” within five weeks. “It will be from 75 to 80,000 words; and with anything like half good pictures, it should sell.” A Davos prophecy come true.

Of course, Davos is perhaps best-known for having inspired what would become Thomas Mann’s most famous novel, The Magic Mountain (1924). For three weeks in 1911, Mann went to Davos to visit his wife Katia, another sufferer of tuberculosis, whom he had met a few years prior on a tramway in Munich. Katia spent one year in Davos, during which she sent many letters to her husband describing the peculiar, day-to-day life in the sanatorium. “The bizarre, minor figures in The Magic Mountain were the same people Katia described in her letters,” Jeffrey Meyers notes in the Virginia Quarterly Review. Katia herself disclosed in her memoirs that many characters were real: she quotes Frau Störh and Madame Chauchat, among others. Meyers adds that Thomas Mann “never worried about the effect his work would have on the people who inspired his characters,” but that seems only partly true since the writer was cautious enough to change the name of his wife’s sanatorium (“Wald”) to avoid any trouble with the managing staff. In the 1950s, the use of antibiotics precipitated the end of fresh air therapies and, with their disappearance, those of the “triumphant sanatorium society” that Roland Barthes, also a regular in French and Swiss sanatoriums (though never in Davos), so vividly described.

It would take decades for Davos to host Nobel Laureates in Literature again. Although he refutes having been inspired by Thomas Mann’s novel, Klaus Schwab did choose Davos as the site for the WEF because it was a secluded, quiet and discreet location, exactly the kind cherished by former “sanatorium societies.” Though writers were conspicuously absent from the earliest iteration of the WEF, the intersection of politics and art has played an increasingly visible role in the life of the forum over the past 20 years. In 2013, one panel convened writers Paulo Coelho, Henning Mankel, and Elif Shafak to address the question, What inspires authors to devote their lives to literature? “I do sincerely believe storytellers need to be more on international platforms, especially in Davos,” Shafak said in a 2016 interview. “It’s not an easy dialogue but one that can be creative.”

Shafak has become a Forum regular like Coelho, who attended for the first time in 1998. “I do everything in my power to introduce social entrepreneurs to investors,” Coelho said. “I use my fame to help those in need.” Coelho justified his presence by mentioning distinguished predecessors who also made appearances at the Forum, like Wiesel, Gordimer, and Vargas Llosa. In perhaps the most interesting exercice de style of a writer in Davos, Umberto Eco shared a prophecy with the elite crowd in 2000. Eco’s “vision of the future” foresaw the end of European nation states, the globalization of migration, the end of representative democracy and the end of ethics. Let’s hope that at least one Davos prophet was wrong.

Isabelle Mayault is a Geneva-based freelance writer and novelist. Her work has appeared in Le Monde and The Guardian among other publications. Her first novel, Une longue nuit mexicaine (A Long Mexican Night), is forthcoming from Gallimard (France) in February 2019. 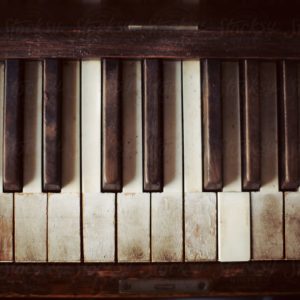 A few years ago, I overheard a woman telling her friend that she'd finally found a meaningful way to get rid of the piano...
© LitHub
Back to top