A Brief History of the Hit Christmas Song

Ben Yagoda on How "White Christmas" Started It All

Seasonal songs became a recording industry commodity in the 1940s, especially when it came to the big kahuna of seasons. The trailblazer was Bing Crosby’s record of Irving Berlin’s “White Christmas.” Berlin actually wrote the song before Pearl Harbor. He was in California and the opening verse begins: “The sun is shining, the grass is green / The orange and palm trees sway / There’s never been such a day / In Beverly Hills, L.A.” But Crosby’s performance of it in the film Holiday Inn and recording for Decca both came out in the summer of 1942, minus the verse. The geographical and meteorological nostalgia of the rest of the lyric effortlessly transformed into a wistfulness for Christmases past. Crosby’s record was number one on the charts for 11 consecutive weeks in the fall of ’42, and, by most accounts, is the most successful recording of all time. The Guinness Book of Records estimates that various versions of the song have sold 100 million copies, with Crosby’s record accounting for half of the total.

Other wistful Yuletide songs followed. Crosby released “I’ll Be Home for Christmas” in 1943; the lyrics appear to be transcribed from an overseas soldier’s letter home. He starts: “I’ll be home for Christmas / You can plan on me / Please have snow and mistletoe / And presents on the tree.” But there’s an abrupt kicker at the end of the second chorus, as Crosby sings, “I’ll be home for Christmas / If only in my dreams.” Ralph Blane and Hugh Martin’s wrote “Have Yourself a Merry Little Christmas” for the 1944 film Meet Me in St. Louis. The story is set in 1904, and the character played by Judy Garland sings the song to her little sister, in an attempt to console her about an upcoming move to New York. But no one could mistake the emotional connection to contemporary wartime: “Someday soon, we all will be together / If the fates allow. / Until then we’ll have to muddle through somehow…” (In 1957, Frank Sinatra was putting together an album called A Jolly Christmas and asked Martin to provide some more upbeat lyrics. The writer provided some changes, including replacing the “muddle through” line with “Hang a shining star upon the highest bough.” That became the most commonly performed version.)

The amazing success of “White Christmas” was impossible for songwriters, publishers, and A&R men to ignore, and they made the postwar years the heyday of the holiday novelty number, producing scores of contenders each year.

Sharing some of the wartime melancholy of “White Christmas” and “Have Yourself a Merry Little Christmas” was “The Christmas Song,” which is sometimes known by its opening line, “Chestnuts roasting on an open fire” and was written by Mel Tormé and Bob Wells in 1944. The first recording was by the King Cole Trio, a jazz combo consisting of guitar, bass, and Nat King Cole on piano. The sharp-eared Johnny Mercer signed the group after cofounding Capitol Records in 1945, and the group produced jump jazz of the highest order, often featuring Cole’s intimate, precise, and swinging vocals. Through 1946, the group charted with a half-dozen numbers, including “Straighten Up and Fly Right” and “(Get Your Kicks on) Route 66.” But they didn’t crack the top ten until they replaced swing with sentiment. That word was part of the title of their first big hit, “(I Love You) For Sentimental Reasons,” which was number one for six consecutive weeks in the fall of 1946. “The Christmas Song” was originally recorded with just the trio. But Cole, shrewd about the market, insisted on a new session, with strings and a harp. That version became a perennial classic.

The most direct imitation of Berlin was “Blue Christmas,” a country-and-western hit for Ernest Tubb in 1950 and for Elvis Presley seven years after that. Also in 1950, Paramount Pictures was putting together a Bob Hope movie called The Lemon Drop Kid; based on a Damon Runyon story, it was an obvious attempt to capitalize on the popularity of Frank Loesser’s Broadway hit Guys and Dolls. It was set in New York at Christmas, and the studio asked their staff songwriters Jay Livingston and Ray Evans for a holiday number. Ever the efficient and compliant craftsmen—and aware that their contract was up for renewal in a brutal time for studio songwriters—they produced a simple but memorable song called “Tinkle Bells,” about the Salvation Army workers on busy city streets. When Jay told his wife about it she said, “Are you out of your mind? Do you know what the word ‘tinkle’ means to most people?’” The boys kept the melody and changed title to “Silver Bells.” Bing Crosby and Carol Richards’s recording, released before the film, was so popular that the studio called Hope co-star Marilyn Maxwell into the studio to reshoot a more elaborate production number. Hope made “Silver Bells” his Christmas theme, performing it every year on his holiday television special. The website devoted to Ray Evans’s legacy lists 224 recordings of a song, from Clay Aiken through Stevie Wonder. And, yes, their contract was renewed.

It turned out that the most successful Christmas records tended to have two common qualities: catchy, upbeat melodies and imagined unlikely scenarios for anthropomorphized yuletide characters. “Frosty the Snowman” was a triumph in 1950 for the cowboy turned mainstream singer Gene Autry, and “I Saw Mommy Kissing Santa Claus” for 13-year-old Jimmy Boyd in 1952. (The song had the distinction of being banned by the Diocese of Boston because it combined sex and religion.) The biggest Christmas song of all was the creation of a tunesmith named Johnny Marks, who put to music a humorous poem written by his brother-in-law, “Rudolph the Red-Nosed Reindeer”; Autry’s recording reached number one on December 31, 1949. Despite the fact that Marks—like Berlin, Livingston, Evans, and most other songwriters—was Jewish, he repeatedly returned to this particular well, writing “Rockin’ Around the Christmas Tree,” “A Holly Jolly Christmas,” and other holiday songs. But none reached the heights of his first hit. A 1980 People magazine interview with Marks contained some illuminating statistics. To that point, Autry’s version of “Rudolph” had sold more than 12 million copies, and records by some 500 other performers 130 million more.

Ben Yagoda has written many books, most notably Will Rogers: A Biography, and his latest, The B-Side: The Death of Tin Pan Alley and the Rebirth of the Great American Song, out now in paperback from Riverhead. 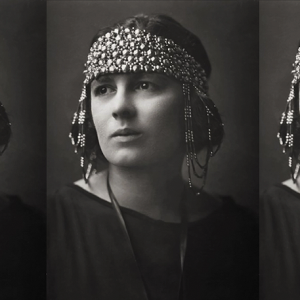 Dubravka Ugrešić on refugees, dislocation, and the moral crisis of our time. | Literary Hub “I love the lone...
© LitHub
Back to top