A Brief History of Litquake, a San Francisco Literary Institution

From October 6 to 14, Litquake will take over the San Francisco Bay Area, gathering more than 850 authors for a nine-day extravaganza. The first day-long festival organized in 1999 by co-founders Jane Ganahl and Jack Boulware featured 22. In 2002 it expanded into a nine-day literary phenomenon, and in 2004 it added the Lit Crawl, a reading/drinking procession through the Mission District that has expanded globally. Today Litquake is housed in an office in San Francisco’s historic Mechanic’s Institute building, right next to literary magazine Zyzzyva. Posters of Litquakes past line the walls. Litquake 2017 is on everyone’s mind, but the founders took time to reminisce.

Jane Ciabattari: How did Litquake start?

Jack Boulware: Litquake began over drinks in a bar. Specifically, the Edinburgh Castle Pub in the city’s Tenderloin district. In the mid-1990s a small crowd was developing around the Edinburgh, which was producing semi-regular literary events, from readings and James Bond nights, to cabaret sketch shows, George Orwell tributes, and the US premiere of the Irvine Welsh play Trainspotting.

We envisioned a one-day event in Golden Gate Park, came up with the name Litstock, and invited a wide variety of local authors to read for ten minutes each. A jazz duo played authors on and offstage. A small tech company called Netreads built a website, and the S.F. Examiner sponsored us for a whopping $400, and their cartoonist Don Asmussen did the poster. Around 400 to 500 people showed up, which was shocking to us. I have a memory of Ishmael Reed closing the show, reading against a fierce wind.

One of the reasons Litstock happened was that nobody appeared to be paying much attention to literature in the Bay Area at that time. To my eyes, the entire city had succumbed to a dotcom frenzy of quick and easy money, and nobody was writing books, they were all writing content for Pets.com, and websites which reviewed other websites, and all of the rest of that first-wave nonsense. I met a young woman at a Writers’ Grotto party, she mentioned she was a writer, and when asked what she was writing, she replied, “Well, right now I’m writing for Pampers.com.” It felt like literature was over, and the internet had won.

JC: What were the original obstacles?

JB: I don’t recall many obstacles the first two years. There was a great benefit in that we had no idea what we were doing. People really responded to the first one, and were asking us, Are you doing another? So Jane and I did another. In 2000 we moved the festival to the Yerba Buena Gardens, another one-day series of outdoor readings. It was still very much an all-volunteer project.

JC: Why did you continue?

JB: We considered doing a third year of Litstock in early 2001, but the bubble was bursting. Stocks were crashing, companies were folding, and all of the funny money was suddenly gone. San Francisco turned into a ghost town, as thousands of people rented U-Haul trailers and left the Bay Area. Nobody wanted to sponsor us, and we certainly didn’t have any money, we were both writers. So we decided, well, that’s it, we did this festival for two years. Let’s just forget it, and go back to figuring out how to pay the bills. In 2001, if you were making your living as a writer, that was a very tough year. Lots of gigs vanished overnight, and then after 9/11, the New York publishing industry basically went into hibernation.

But without some sort of festival in San Francisco, it felt to us like there was a hole in the literary community. We regrouped in early 2002, again at the Edinburgh Castle, and invited some people into our planning committee. We brainstormed the name Litquake, picked a weekend, and staged most of the events indoors around San Francisco’s Civic Center. US Poet Laureate Robert Hass was one of the participants. Lawrence Ferlinghetti arrived two hours late for his time slot, but then proceeded to blow all of us away by reading a poem entitled “Lit.Quake,” [http://www.litquake.org/about/ferlinghettis-lit-quake] which was all about our festival. It was quite an honor, but also, I felt that he had thrown down the gauntlet. If you read the poem, he appears to be telling us, What are you going to do with this thing? Don’t screw it up! I still feel that way.

Jane Ganahl: Don’t forget the funny part of that story. In the early years we would buy little awards for Litquake authors—just tongue-in-cheek junk, like blue ribbons with “Best in Show” on it. That particular year it was a tiny trophy about the size of your hand: a marble base with a plastic “lamp of knowledge” on top. And it said “Litquake 2002: First Place.” After Ferlinghetti finished his mind-blowing recitation, he walked off the stage and took off! Jack and I ran after him through the lobby of the State Building, calling out to him to stop so we could give him his dumb award. He looked at the trophy and asked innocently, “Was I really first place?” Jack and I didn’t know how to respond, so we just said, “Of course you are!”

JC: What have been the most surprising successes over the years?

JB: Our 2010 tribute to Ferlinghetti and City Lights ranks at or near the top of Litquake highlights. We filled 1,000 seats at the Herbst Theater, and people heard from a Who’s Who of guests, including Robert Scheer, Juan Felipe Herrera, Winona Ryder, Steve Earle. We screened a short video of Shakespeare & Co.’s George Whitman, sent over from Paris. Patti Smith sang a few songs. I sat on the side of the stage and watched Tom Waits improvise a song, to the words of “Coney Island of the Mind,” with Marcus Shelby looking over his shoulder picking out the bass notes, and thought, “Man, it’s never going to be like this again.”

JG: I would also single out the smaller moments and unknown writers for big buzz factor. We once hosted an evening of young Irish writers sent over by their government for an evening of readings (aptly titled “Young Ireland”). Even though none of these authors were big names in the States, the audience was just blown away.

JB: It might have been the complimentary Magners Cider as well.

Also, the Lit Crawl was an immediate success. But at the time we had no idea how it was going to go over with the neighborhood or the literary community. It was a pretty unconventional concept. No books for sale. Everything is free. Authors are doing readings in bars, or alleys, or furniture stores, laundromats, adult toy boutiques. People are running down the sidewalks, jaywalking all over the place. It strays far from your typical book festival template—no rows of exhibitor booths under fluorescent lights, no stanchioned lines of fans waiting 45 minutes to get a book signed. It generates interest in a younger literary audience that was in many ways otherwise ignored. People got it immediately. Some have said that Lit Crawl could start in no other city than San Francisco, and we’re proud to spread the DNA far and wide.

JC: What inspired you to launch Lit Crawl?

JB: The idea came out of discussions we had with two employees at Chronicle Books. They were keen to partner with Litquake to recreate the spirit of South By Southwest in Austin, a walk-around night through a neighborhood, except with literature. We agreed it was a fantastic idea, and as conversations continued the Chronicle Books people suddenly lost interest and disappeared, I’m not sure why. I hope they’re okay.

We thought, well, let’s just do it ourselves. There was no template for this, we just made it up out of thin air. We chose the Mission District, for its number of bookstores, cafes, and (at least at that time) affordable housing for writers, and launched the first Crawl in 2004 in the middle of Litquake week. The following year we moved it to the festival’s closing night, because it was ludicrous to try and follow the Crawl with any other events, and it’s kept growing ever since.

As word spread of this crazy Lit Crawl idea in San Francisco, people who had attended were curious to start something similar in their own cities. We set up a Lit Crawl Global network and franchising system. We now provide each city with graphics, calendar software, and ongoing consultation. SF is by far the largest, with 103 events this year, and the other cities host their Crawls in a variety of ways. Some are stand-alone events, some are attached to larger festivals, such as Portland’s Wordstock, Austin’s Texas Book Festival, the Cheltenham Literature Festival. They’re all unique to that community

JC: At what point did you begin to spread programming year-round?

JG: That was around five years ago, when someone had the marketing idea that we’d have more success with name recognition if we peppered the year with author appearances and events. Damn that person, whoever it was! That took us to the next level as a literary organization. We started up monthly writing classes and workshops (our Master Class Mixers conclude with cocktails), a Lit Cast podcast, an Epicenter series of touring authors, and this year, we began a series called No Shadow Without Light. The event title was taken from a Margaret Atwood quote: “I believe in the resistance as I believe there can be no light without shadow; or rather, no shadow unless there is also light.” We launched this solely in reaction to the election of Donald Trump. One month we had immigrant authors responding to Trump, another month political cartoonists, journalists, environmental writers, and so on. We feel we need to do these things to keep our programming fresh and unpredictable.

JC: What are you most excited about this year?

JB: We’ve revamped much of our programming for this year, rotating things in and out. We’ve added more book-to-film screenings, a five-day series of international authors, and more Kidquake and Teenquake events than ever. And we’re convening a night called “Parsing the President,” where a panel of experts, including former Sen. Barbara Boxer, linguist Geoff Nunberg, and psychiatrist Dee Mosbacher, dissect the mental state of the person who currently sits in the White House. Because it’s that kind of a year.

JG: We also have a few out-of-left-field events. One of my favorites is “Sand, Surf and Sartre: Wisdom in the Waves,” held at a surf shop on Ocean Beach, with two prominent surfing authors and thinkers (Jaimal Yogis and Aaron James). We’re also doing a night about the history of the Black Panther movement, a celebration of female authors (“She Persisted: Readings by Women Who Refuse to Sit Down”) including Carina Chocano, Amy Dresner; “Exalted Verse: Poetry at Grace Cathedral,” and possibly the weirdest event we’ve ever done: “Pounded in the Ear: An Erotic Tribute to Chuck Tingle.” Never heard of him? Look him up—you’ll be glad you did.

And we are really, really looking forward to that self-congratulatory bourbon at the closing party.

10 Tales of Manuscript Burning (And Some That Survived) 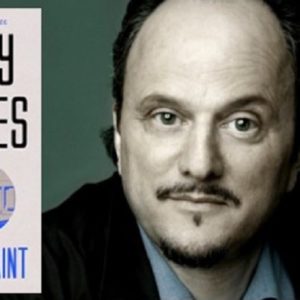 What was the first book you fell in love with? Appropriately, it was Love Story by Erich Segal. This was in 1970. I found...
© LitHub
Back to top