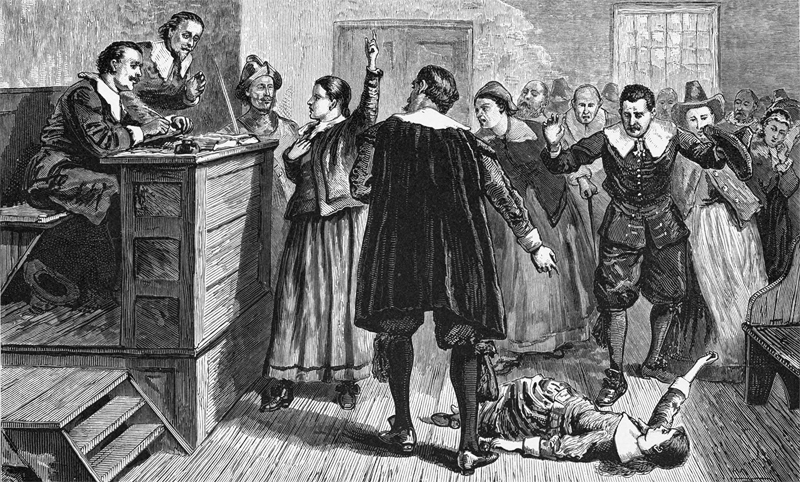 Eleanor Herman on the Patriarchy’s Timeless Demonization of Powerful Women

In the early fifth century, a time when the increasingly powerful Catholic Church clashed with the remainders of the pagan world, Hypatia of Alexandria was a renowned pagan mathematician, scientist, teacher, and philosopher. Known for both her genius and her acceptance of people of all religions, she gained great power as top politicians routinely asked her advice, particularly on ethics.

But there were many public officials who did not want a woman to have that kind of influence, especially one questioning their ethics. When the Roman imperial prefect Orestes turned to her regularly for advice on how to handle the unruly population, her political opponents said she had enchanted him with witchcraft, being “devoted at all times to magic, astrolabes and instruments of music, and she beguiled many people through her Satanic wiles.” Her enemies, evidently at a loss at what to do with scientific instruments, assumed she was up to no good with them.

As conflict increased between Orestes and Bishop Cyril of Alexandria—no great fan of Hypatia’s—Cyril’s followers blamed the witch, now a venerable sixty-five years old, for preventing peace and prosperity in the city. In March 415 CE, a mob seized her from her carriage, dragged her into a church, carved out her eyes and her living flesh with oyster shells, then tore her limb from limb. As if that weren’t enough already, they then carried the pieces of Hypatia outside the church and set them on fire.

Her enemies, evidently at a loss at what to do with scientific instruments, assumed she was up to no good with them.

The dazzling Anne Boleyn was also called a witch, and many at the time believed she had used witchcraft to become queen. Eustace Chapuys, the Spanish ambassador to England, wrote that the king “had been seduced and forced into this second marriage by means of sortileges and charms.” Because, as we all know, Henry VIII was a weak, vacillating sort easily overcome by a woman whispering incantations over a candle.

Though Anne’s hair was likely auburn, she was posthumously given black hair to make her seem more witchlike. In Anne’s lifetime, the Venetian ambassador described her hair as “marrone,” which can refer to a range of shades from brown to auburn. Her daughter Elizabeth I wore a ring—now called the Chequers ring, named after the prime minister’s country residence, where it resides in an antiquities collection—that opened up to show two miniatures, one indisputably of herself, the other, most experts agree, of her mother. No other Tudor court personage wearing a 1530s headdress could conceivably be the person whose image Elizabeth, born in 1533, would have wanted in her ring. Yet the Anne figure has red hair.

Another clue to Anne’s identity is that the miniature was hidden, covered by rubies, diamonds, a pearl, and a bit of blue enamel in the shape of the letters ER (Elizabeth Regina). The ring had to be opened to see her. Elizabeth rarely, if ever, mentioned her mother. In 1536, Henry VIII had Anne Boleyn executed on trumped-up charges of adultery, annulled their marriage, and officially declared Elizabeth a bastard.

Catholic kings, considering her to be an illegitimate queen, were itching to topple her and place a Catholic rival on the throne. Any mention of Anne Boleyn would just fan the flames of the troubling question regarding Elizabeth’s right to rule. Because of this, she never had her mother’s bones dug up from the floor of the Tower church, where they moldered in an arrow box, for a more dignified burial in Westminster Abbey.

How, we ask, did auburn-haired Anne Boleyn end up in the popular imagination with black hair? Well, for one thing, no known portraits of her survive from her lifetime, probably because Henry VIII had them destroyed. (It’s so irritating to be reminded that you beheaded your wife.) In 1585, a Catholic propagandist named Nicholas Sander was the first to mention black hair—everybody knows witches have black hair—as well as a sixth finger and several disfiguring moles, all signs of a witch.

Sander, who hoped Elizabeth would indeed be toppled, even gave Anne a third nipple, the devil’s teat. It is difficult to believe that suspicious, superstitious Henry, a man with a keen eye for female beauty, would be attracted to a woman with all the marks of a witch.

True, Anne was ambitious—even more disturbing then than now—and she had a fiery temper. But it was her power that unsettled and enraged, power no woman should have, particularly one not born into a royal family. Henry consulted Anne on both political and religious policy, creating conflict as many Englishmen welcomed the new religion while many others clung to the old.

The king’s next queen, silent Jane Seymour, with the seal of Patriarchal approval upon her, inspired no outrage as she possessed no power, nor is it likely she would have known what to do with it if she had. No one ever accused Jane of using witchcraft to become queen, even though Henry married her a mere eleven days after beheading her predecessor whose satanic powers had somehow failed to prevent her own execution.

It was her power that unsettled and enraged, power no woman should have, particularly one not born into a royal family.

Catherine de Medici was another woman who, many men believed, usurped power that should have belonged to them and probably did it through witchcraft. True, she consulted astrologers, but so did every other monarch of the time, though hers seem to have made more accurate predictions than most. Their success— which may have been embellished a bit over time—just reinforced her reputation as a necromancer. For instance, in 1556, when she asked the astrologer Nostradamus to cast the horoscopes of her family, he reportedly went into a trance and wrote in his book of prophecies:

The young lion will overcome the older one,
on the field of combat in a single battle;
He will pierce his eyes through a golden cage,
Two wounds made one, then he dies a cruel death.

The astrologer advised Catherine’s husband, Henri II, not to joust, as he would suffer a horrible accident, a prediction the king blew off. Three years later, the lance of his younger opponent crashed through the king’s golden helmet (the golden cage) and splintered into two pieces, one of which impaled his eye, the other his temple (two wounds made one). Some spectators claimed the men carried shields with lions on them, a common heraldic theme. The king died after ten days of absolute agony.

From the day of Henri’s death, Catherine wore only black mourning, which also contributed to her reputation as a witch. (Everyone knows witches wear black.) Her Italian astrologer Cosimo Ruggeri is reputed to have correctly predicted that three of her sons would become king, and none of them would have legitimate sons. In 1574, the imperial ambassador wrote Philip II of Spain that the queen and Ruggeri had conducted a black mass at a black altar with black candles, where they sacrificed a young Jewish boy and cut off his head, hoping to hear it speak occult secrets.

Catherine was accused of murder in an immensely popular 1575 book—the title is quite a mouthful—A Mervaylous Discourse upon the Lyfe, Deeds, and Behaviours of Katherine de Medicis, Queen Mother: wherein are displayed the meanes which she had practised to attain unto the usurping of the Kingedome of France, and to the bringing of the estate of the same unto utter ruine and destruction. According to this book, she tried to murder an enemy with a poisoned apple, just as the evil witch queen did to poor Snow White. The anonymous author even compared her to the mythical Circe, for “with her ensorcelled drinks she had bewitched us and transformed us into the shapes of bruit beasts or rather deprived us of our senses.”

The underground French press portrayed Marie Antoinette as a winged harpy whose razor-sharp talons dripped blood from her victims, Satan’s daughter who drank and bathed in human blood, and an insatiable monster out for human flesh. Her head was printed on a four-legged animal’s body, with snakes writhing in her hair.

Such antiquated references to powerful women as monsters are alive and well in the twenty-first century. The London Sunday Times called Hillary Clinton an “unkillable” zombie moving “relentlessly forward.” A commentator on Fox News called her a blood-sucking “vampire.” The day after Kamala Harris’s successful vice presidential debate against Mike Pence, Donald Trump called her “this monster.” How odd that we have made absolutely no progress since John Knox wrote in his 1558 First Blast of the Trumpet Against the Monstrous Regiment of Women that any woman who dared “to sit in the seat of God, that is, to teach, to judge, or to reign above a man” was “a monster in nature.”

Transforming powerful women into green-faced witches and snake-haired monsters serves a dual purpose: it simultaneously diminishes the power of those who have escaped the patriarchal boundaries on their place and also discourages other women from following in their path. Who in their right mind would want to be chopped to pieces like Hypatia, Anne, or Marie? Who would want to be trashed in the media like Clinton, Gillard, and Harris?

Hillary Clinton has been accused of participating in ritual sex magic and attending a “witch’s church” (whatever that is) with her female friends. By early 2019, right-wing religious groups were accusing socialist representative Alexandria Ocasio-Cortez of belonging to “a coven of witches that cast spells on Trump 24 hours a day” (which actually might explain a lot).

Well might we wonder what was truly going in Hillary Clinton’s scary basement with her sinister private email server when she was secretary of state. Flickering torches on the walls? Naked crazed dancers smeared with blood? Female Democrats, dressed in fawn skins like maenads, waving ivy-bound sticks and muttering incantations? Stolen penises of Republican politicians and Tucker Carlson, squirming around in a box, eating oats and corn? 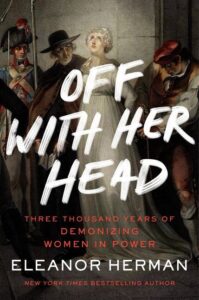 Excerpted from Off With Her Head: Three Thousand Years of Demonizing Women In Power by Eleanor Herman. Copyright © 2022. Available from William Morrow, an imprint of HarperCollins Publishers.

Eleanor Herman is the New York Times bestselling author of Sex with Kings, Sex with the Queen, and several other works of popular history. She has hosted Lost Worlds for The History Channel, The Madness of Henry VIII for the National Geographic Channel, and is now filming her second season of America: Fact vs. Fiction for The American Heroes Channel. 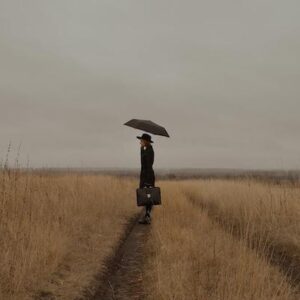