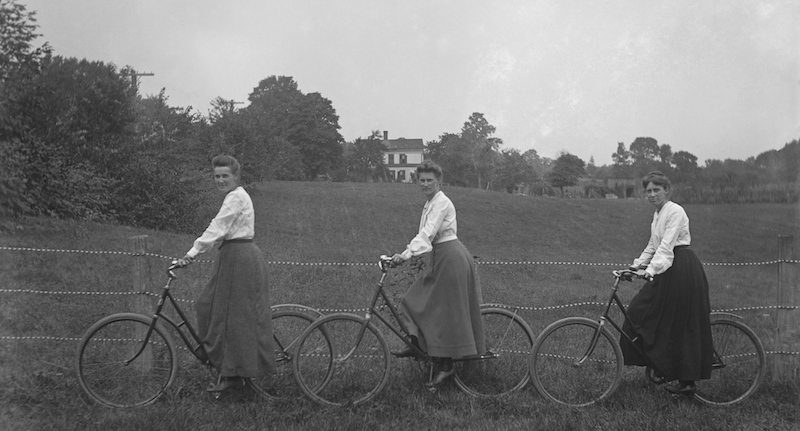 A Brief Feminist History of Bike-Riding

Simone de Beauvoir is, of course, far from alone in becoming enchanted by taking to the open road on two wheels.

“What would become of us, if we walked only in a garden or a mall?” was a question posed in 1862 by poet, philosopher and keen walker Henry David Thoreau, which could also have been asked of cyclists a few decades later. As we know, they didn’t just keep to their local parks and streets. Instead, during the nineteenth century boom in travel and tourism—particularly in affluent Western Europe and North America—using a bike to explore destinations further afield became increasingly common. Cycling holidays abroad were so popular by the end of the nineteenth century that travel company Thomas Cook started offering bike tours, though more intrepid cyclists preferred to go it alone off the beaten track. In the 1890s, the UK Cyclists’ Touring Club (CTC) membership quadrupled, with many members traveling to places they otherwise might never have reached. The club’s gazette was packed with their stories of travels at home and abroad, inspiring others to follow their example, each account illustrated with black-and-white photography or sketches.

The editor of the “Ladies” page of the CTC’s Gazette, Lillias Campbell Davidson, knew from personal experience that women who learned to ride would inevitably “thirst for longer flights; for the pleasure of going on and on, and never turning back” and in so doing would feel like “an explorer venturing for the first time into a new country and discovering a world for herself.” And so increasing numbers of those who had the luxury of both time and money were opting to spend a few days, weeks or even months pedaling from place to place, through landscapes—and even countries—that were previously unknown to them except through books and paintings. Some become pioneers as the first women to cycle through certain countries or regions, and one even going as far as to pedal around the globe solo in 1894, though most didn’t feel they needed to venture quite so far to feel like adventurers.

Even today, when the relative cheapness and availability of mass and private transport has made the world more accessible, a long journey by bike is still an adventure, enabling the exploration of new areas in ways that can’t be replicated from behind the window of a vehicle. While cycling around one’s city can too often be more about getting from one place to another without thinking about much more than the most efficient and safest route, on a longer trip, leaving the city behind for a destination a few hours, days or weeks away it is all about the journey.

People are still embarking on long cycle trips, pedaling across continents or around the world for months, or even years. It has become a popular antidote to the pressures of our busy, technology-driven modern lives, a way to feel more alive and in the moment by stripping things back down to the basics of just turning the pedals along the open road to see how far and where it will take you. Some want the challenge, others are looking for escape or hoping to find themselves along the way. A few even hope to set new records or test the limits of their physical endurance.

Juliana Buhring, the first woman to hold the record for fastest circumnavigation of the world by bike, a type of cycling where you wouldn’t think you’d have much time to take things in, wrote that even during her race against the clock, being on the bike is like being “inside the movie, an essential part of it. Completely reliant on your environment, you observe and absorb every sensation around you.”

When I travel by bike, I might not take in absolutely everything, but I do need to be alert and responsive to the environment in ways I’m not required to be on public transport, which gives me a heightened awareness of my surroundings. Even on routes I know well, like the one I sometimes take from London to see my family in Somerset, through the quiet lanes of Berkshire and Wiltshire, where I now recognize every turn in the road, anticipating certain landmarks along the way, including the bronze-age white horse carved into the hills, there is always something new to observe. Sometimes it’s just about taking in the changing of the seasons from one month to the next—the bright bluebells spiking the woodlands in April and the hawthorn blossom and cowslips bursting from the verges and hedgerows in May. All these things I would miss if—were I able to drive—I had taken the M4 motorway instead. I am moving through a landscape in a way that feels more intimate and responsive, even if it sometimes means having to endure the worst that the weather throws at me, too much traffic or mechanical faults. Though if the weather does happen to be foul, then a hot bath, enormous meal or reviving drink at the end is more delicious and earned than it ever would have been otherwise.

Had I lived in France in the 1890s and wanted to join the French equivalent of the Cyclists’ Touring Club, I would have needed the permission of my husband. However, since women started cycling, they had been getting out and exploring the world around them—with or without permission.

Had I lived in France in the 1890s and wanted to join the French equivalent of the Cyclists’ Touring Club, I would have needed the permission of my husband.

Not all of them were ready to set off entirely on their own—at a time when women doing anything unchaperoned still wasn’t the norm, and particularly when they were being told that dangers lurked around every corner for lone women. The Victorian writer and cyclist Harcourt Williamson felt that women cycling alone were in “some considerable peril,” particularly from “tramps”—the bogeymen of the day—who may be “desperate with hunger or naturally vicious.” It’s unsurprising many sought strength in numbers. Some might have opted for a lady cyclist chaperone. These female cycling guides handled all aspects of the trip from route planning to accommodation, as well as basic mechanics, leading their charges through picturesque scenery and taking in historic sites. Others joined the Lady Cyclists’ Association to connect with other enthusiasts who might want to join them on some cycling adventures, using their handbook of approved inns to find accommodation en route run by landlords or landladies who wouldn’t blink when women arrived a-wheel.

A handbook may have come in handy for a cyclist called Martha when in 1892 she traveled from the United States to tour across Germany with four of her girlfriends. When they disembarked in Hamburg, they were met by incredulous customs officers who took some persuading that they were really the owners of the bicycles that had emerged from the ship’s hold. After a few days reassembling their steel steeds in their hotel, they started out on the road to Leipzig, carrying their luggage in canvas rolls attached to their handlebars. Their packing was light—a change of underwear, combs, cosmetics, German-English dictionary and map. They must have read Maria Ward’s Bicycling for Ladies since they were unflustered mending punctures and a broken chain.

It wasn’t only the customs officers who were astonished by five women pedaling through Germany, with Martha describing how they immediately became “the observed of all observers” when “business men, errand boys, bakers, butchers, fruit women and all sizes of children gazed at us with open-eyed, and, in many cases, often open-mouthed, astonishment.” Another member of the party, Julia, wondered whether “they think I am going to fly over their heads.” Luckily the crowd that had gathered wasn’t planning a witch hunt and eventually parted to let them on their way. During their journey they did not see a single other woman riding a bicycle. When they told one innkeeper that they were American, “all seemed explained—Americans dare anything.” The Germans they met along the way were welcoming, though, providing them with shelter from the rain, offering them beds for the night and plying them with food and drink. The group also made the most of the country’s beer halls and inns, refueling with wine and wurst before pedaling on to Leipzig.

Not all women felt they needed to travel with companions. Campbell Davidson in her 1896 Handbook for Lady Cyclists was confident that in the UK and much of Europe, it was “quite safe for a lady to ride alone without any fear of molestation or annoyance”—a statement that many would have found difficult to believe since they had been told the exact opposite for so long. Lillias had been encouraging women to travel solo, to take trains and even scale mountains, since she published Hints for Lady Travellers in 1889—a book aimed at women whose lives she described as having hitherto been “unnaturally cramped and contracted within doors.” She was a great advocate for venturing out into the wider world, though admits that women earlier in the decade, those pioneers of cycling such as herself, had often encountered some “annoyance, unpleasant comment, and rudeness” when they traveled the country by bicycle. However, she felt that by the mid-1890s, the peak of the cycle craze, women solo tourers would “probably receive nothing but kindness and courtesy from one end of their journey to the other . . . even if they are attired in rational dress.” Though she too warned that tramps on the big roads into cities might cause problems.

For Lillias, the main danger for women cyclists in rural areas was not people, but animals, with even hens “a great affliction to the lady cyclist.” To combat the problem of dogs running after cyclists, she recommended her readers pack a long whip to scare them off. As someone who is frequently chased by dogs when cycling through the countryside, and once a flock of angry geese, I can understand why she felt this was such a pressing issue. But since I can usually outpace geese and dogs, I haven’t resorted to carrying a whip myself.

When more fearsome animals like bears and wolves were a possibility, some cycle tourers opted for a more deadly weapon. In 1897, Margaret Valentine Le Long packed a borrowed pistol for her solo cycle from Chicago to San Francisco. She was, an unwilling firearms user, packing it in her tool bag to make it hard to get at should she need it. 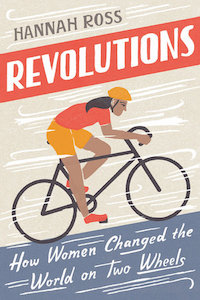 Excerpted from Revolutions: How Women Changed the World on Two Wheels by Hannah Ross. Reprinted with permission of the publisher, Plume, an imprint of Penguin Random House.

Hannah Ross works for an independent publisher in London. When she isn’t working on other people’s books or writing her own, she is usually on a bike. She belongs to a local cycling club and also volunteers for a charity helping refugee women learn to ride bikes. Whenever she can, she packs up her saddle bags and heads for the open road, and now she doesn’t feel she’s really traveled anywhere unless it’s on two wheels

The Costs—and Rewards—of a Treacherous Search for Asylum 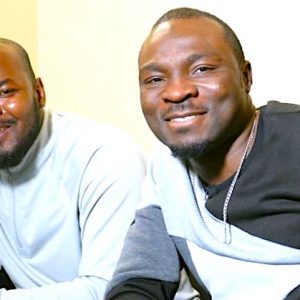 The Costs—and Rewards—of a Treacherous Search for Asylum

When Seidu Mohammed was 22 years old, he was invited to try out for a soccer team in Criciuma, Brazil. Seidu had been born...
© LitHub
Back to top
Loading Comments...