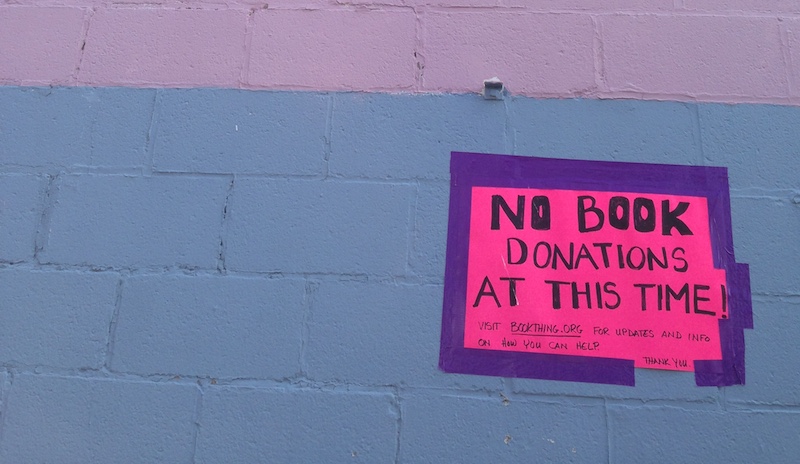 A Baltimore Book Institution, After the Fire

The Book Thing, Beloved Free Lending Library, Will Go On...

It’s the first warm Sunday of the year and I’ve arranged to meet Russell Wattenberg, the founder and owner of The Book Thing of Baltimore, to talk about the previous Wednesday’s fire, which brought a swift halt to business as usual at this beloved free bookstore. Beginning before dawn and burning for a little under an hour, the fire rendered The Book Thing’s space uninhabitable and ruined much of its stock of books, magazines, manuals, and ephemera.

This is why I’m surprised to see that, in addition to the volunteers hauling trash and salvageable bookshelves out of the building, there are at least several hundred books arranged on shelves and in cardboard boxes on the blacktop outside of the building. Book Thing regulars are here, too. There’s a prison librarian from a neighboring county on the hunt for softcover romance novels. There’s a nurse browsing with her kids; they’re looking for illustrated books for the little one and chapter books for the older girl.

Aside from the weirdly pleasant scent of charred paper and the sharper smell of melted plastic, it could be close to a normal day at The Book Thing, as if Wattenberg or one of his volunteers decided to hold the book browsing outside for the day.

For nearly eleven years, Wattenberg has operated The Book Thing out of this space, accepting book donations during the week and opening to the public on Saturdays and Sundays. Calling it a “bookstore” is a misnomer as all of the stock is free for the taking, but it’s not exactly a book exchange, either. Patrons don’t need to swap anything, nor is there a limit to the number of books one can take.

“The Book Thing is a store that is not a store,” says poet and Towson University professor Leslie Harrison. “[It’s] a library without a return policy, a treasure chest of amazing and unending riches free for the taking. It is a water fountain that never runs dry. Every time you go, the books have changed, the people have changed, but The Book Thing is there, full of treasures, the friends you find in pages, and not-quite-strangers.”

Harrison’s sentiment is familiar to anybody who’s visited The Book Thing. Going there feels less like shopping than it does like participating in some high minded but good-natured scavenger hunt. This is why so many patrons bring their own heavy canvas tote bags or cardboard boxes with them to The Book Thing. It’s why—strange as it is to admit—I browse the shelves even as I wait to interview Wattenberg. There, among the ash-flecked remains, I find a hardback copy of Cheever’s Falconer and a near-mint edition of the Oxford Thesaurus. I hold these in my arms as I ask Wattenberg about the history of the place, the fire, and the future.

To hear him tell it, Wattenberg ended up in Baltimore because he needed gas. It was 1995, and he’d recently graduated from Ithaca College. He was making his way down to Florida, where his mother had relocated from the Hudson Valley following the death of Wattenberg’s father. In no particular hurry, he’d taken to meandering south, sticking to smaller highways and backroads rather than the interstate.

“I had all of my worldly possessions in a van,” Wattenberg tells me as we sip coffee provided by volunteers. “I was in no rush to get anywhere, so I just headed south. I gassed up, called a friend of mine from college, and went out to dinner with her and her boyfriend. He needed a hand flipping a house, so I did that and then I stuck around and worked as a mystery shopper.” Later, Wattenberg started bartending and it was then that he became aware of a broader conversation about books, literature, and education funding in Baltimore.

There’s been a long running conversation in Baltimore City Schools about how best to allocate extremely limited resources. In the 1990s, budget shortfalls led to some school library closures. However, in order to keep accreditation, those schools had to ask teachers to maintain a certain number of books in their classrooms. Wattenberg, a lover of books and a bargain, began to pass along books he’d find—in thrift shops, at yard sales, anywhere, really.

“If I saw a book for cheap here or there, I’d pick it up and pass it along. It was just something I did. After a while, people would bring me books or trade me books. A couple of teachers I knew actually filled out the 501(c)3 paperwork that led to incorporating this place.”

When he’s talking about the history of The Book Thing or the logistics of moving from his first location on N. Charles Street to the now-charred warehouse on Vineyard Lane, Wattenberg is all business. But when I ask him how he’s holding up, he shrugs and says, “It’s weird. Every book that came into or left this place, passed before my eyes. Every customer who ever came in here, every person who ever came to drop off books, they’re just right there.” Wattenberg holds out his hands, gesturing to the charred linoleum to illustrate the loss.

“I don’t know if you’ve had a really stressful event in your life,” he continues, “but it’s like, when my father died, the first thing my mother did was to salt the walk for the ambulance people. Then she brushed her teeth. As long as I can stay focused on the details—talking to you, talking to other press, managing the volunteers—I’m just fine. But once I get home, I sit on the couch with a rum and Diet Coke and I lose my shit. My wife has been amazing. It’s one of those things where she just reminds me to put one foot in front of the other and to keep going.”

The sense of loss isn’t limited to Wattenberg, of course. Fiction writer and author of the short story collection The Wild Flowers of Baltimore, Rob Roensch, describes his first encounter with The Book Thing this way: “I first went to the Book Thing one summer day in the early 2000s, when it was still jammed into the basement of a Charles Village rowhouse,” Roensch wrote me in an email.

“It was like being inside the smell of an old book. Every kind of fiction that was obviously more than a few years old and not obviously genre went there—these huge aisles of novels, known and unknown, un-alphabetized, waiting to be discovered and, because everything was free, a book you wanted became yours as soon as you spotted it. It was the magic opposite of going to Barnes and Noble.”

Often, there’s a winking knowingness in Baltimore that doesn’t so much deny the city’s problems as it does acknowledge that, while not always ideal, things aren’t nearly as bad for most Baltimoreans as The Wire or cable news might lead you to believe. Baltimore’s had a down-on-its-luck reputation for so long that bad news is often met with a shrug or a wisecrack, as if to say “No shit? There was a shooting last night?” A popular bumper sticker has recently been showing up around town, and it reads Baltimore: Actually, I like it.

And the reason why people like it are because it’s chock-full of wonderful institutions like The Book Thing—a store that’s not a store, a warehouse that’s not abandoned but fully packed with people each weekend, a not-so-secret gem that’s on every bibliophile’s must-visit list.

But he’s relying on volunteers and donations to make that possible. As a 501(c)3 corporation, charitable contributions made to The Book Thing are tax-deductible, and can be made directly through The Book Thing’s website (look for the yellow Donate button on the left). For additional news and updates about how you can help, about volunteer opportunities, and for progress on the rebuilding The Book Thing, Wattenberg encourages you to keep an eye on their Facebook Page.

Nate Brown is a writer and editor living in Baltimore. He is the managing editor of American Short Fiction and he teaches composition at Stevenson University in Baltimore and creative writing at The George Washington University, in Washington, D.C. 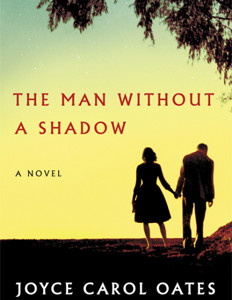