Roy Scranton on Artfulness and the Horrors of War 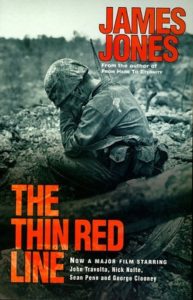 Hot gay grunt sex, beautifully orchestrated combat scenes, masterful use of free indirect discourse, and the most anthropologically astute portrait of the US Army as an institution you’ll ever read, all set in a lush tropical wonderland. Malick’s movie adaptation is pretty, but it misses the mark; James Jones’s novel The Thin Red Line is a sui generis epic telling the story of how a social organism—the infantry unit “C for Charlie Company”—changes and grows through its campaign across Guadalcanal. Jones told his editor Burroughs Mitchell he meant to write a Proustian combat novel, and if any book ever achieved that rare mixture, it’s The Thin Red Line. 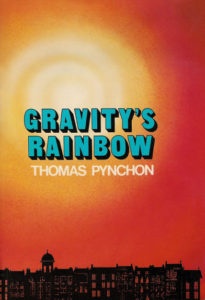 Coprophilia. Incest. Nazis. Rockets. Sex with kids. And lots and lots of rubber. This dark psychedelic novel set in the closing days of World War II won the National Book Award in 1974, which was received on behalf of its reclusive author by stand-up comedian Irwin Corey, and would have won the Pulitzer too except that one of the Pulitzer board’s members found it too obscene. Stylistically brilliant in its subtle shifts from scene to scene, weird interior to weird interior, intimidatingly erudite, relentlessly perverse, and hopelessly complex, Gravity’s Rainbow is perhaps the closest thing America has produced to James Joyce’s Ulysses. It might be genius, it might be a joke, but it’s a compelling work of war porn either way. 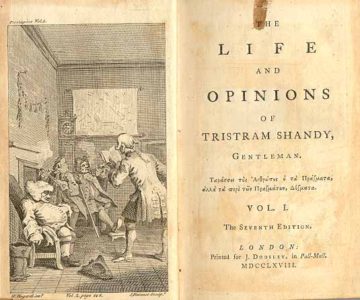 Laurence Sterne, The Life and Opinions of Tristram Shandy, Gentleman

Your English professor may have told you this was a humorous, meta-narrative satire of empiricist philosopher John Locke’s epistemology, but you were never so mistreated in your life as when you were subjected to that malicious lie. The substance of Sterne’s novel is the harrowing story of Tristram’s Uncle Toby, tragically wounded while fighting the French in Belgium, and the struggles he faces returning to postwar civilian life in England. His mind and masculinity shattered by war, Uncle Toby forces fellow veteran Corporal Trim to help him obsessively reconstruct the scene of his trauma, almost like Robert DeNiro and Christopher Walken in The Deer Hunter, to the point where Toby’s “hobby-horsical” repetition compulsion threatens to overwhelm his life, endangering even his late chance at happiness with the Widow Wadman. As Toby and Trim succumb to the brutal eroticism of violence, Sterne shows us that no one touched by war can ever truly leave it behind. 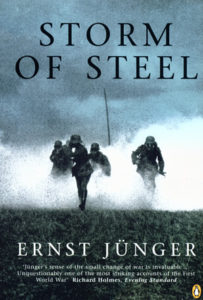 Near the end of this ghoulish, utterly unique memoir of World War I, Ernst Jünger counts his scars: “Leaving out trifles such as ricochets and grazes, I was hit at least fourteen times, these being five bullets, two shell splinters, one shrapnel ball, four hand-grenade splinters and two bullet splinters, which, with entry and exit wounds, left me an even twenty scars.” As steely in its observations as it is refulgent in its depictions of war’s spectacle, Storm of Steel is the kind of book that could only have been written by someone both steeped in German Romanticism and hardened by hellish fighting. Jünger later took a bunch of acid and wrote some very weird sci-fi novels, and that was after he ran into trouble with the Nazis during World War II for being too right-wing. But whatever we might think of Jünger’s politics, the harrowing beauty of Storm of Steel is undeniable—Jünger truly loved war, its vistas, its terrors, its violence, its grotesque machinery, and its demands on men’s courage and character, and his love shines through in every sentence. War porn of the highest caliber. 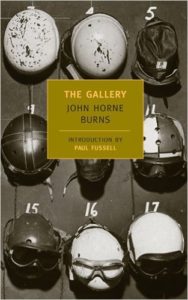 The fighting itself is mostly background in this series of portraits of American-occupied Naples during World War II, but front-line fighting is, really, only a tiny part of the overall business of war. Occupation, on the other hand, is a massive undertaking—in this case involving Red Cross volunteers, whores, grifters, soldiers sick with venereal disease, REMFs, gay lieutenants on the DL, and a rogue’s gallery of beggars, thieves, and liars. Burns’s novel shifts between closely observed and imagined portraits of a motley bunch of Americans and Italians in flagrante, and a kind of impressionistic, stream-of-consciousness autofiction drawn from his own experience. Nothing I’ve ever read, not even John Hersey’s worthy A Bell for Adano, captures the peculiar moral putrefaction military occupation breeds, though Joseph Conrad’s Heart of Darkness and Graham Greene’s The Quiet American offer comparable variations on the basic idea: a walled-in world characterized by a vast gulf between the mighty and the fallen, easy cruelty and easier self-deceit, and the fact that everything—and everyone—is up for sale. 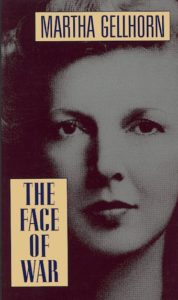 Martha Gellhorn, The Face of War

After a career spent reporting from 20th-century war zones, which she began as a freelancer during the Spanish Civil War, Martha Gellhorn no longer believed in the power of ideas or in the integrity of the press, but she still believed in setting the record straight. Looking back over the decades, this seems to have meant recording a lot of blood, sorrow, and mean stupidity, and a lot of beautiful, brave young men becoming beautiful silent corpses. The Face of War collects Gellhorn’s tough and lucid reporting from Spain, Finland, wartime Germany, Vietnam, and other blasted wastelands, testifying to both humanity’s callousness and Gellhorn’s steely drive to document it. Raw, powerful, angry war porn. 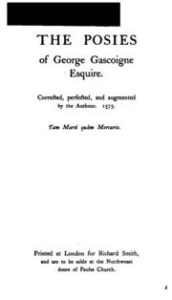 George Gascoigne, “The Fruits of Warre”

Gascoigne stands alongside Thomas Wyatt and Philip Sidney as one of the writers responsible for creating modern English poetry, merging Chaucerian rhythms with French and Italian sophistication, though his greatest fame might derive from his failed bid to become one of Queen Elizabeth’s courtiers: Knowing the Queen was out hunting one day, Gascoigne hid in the forest dressed as “Sylvanus,” wild man of the woods. As the Queen’s party approached, Gascoigne leapt from behind a tree and began declaiming his devotion, in a costume of green hose and shrubbery. The Queen listened for a moment then, bored, rode on, but Gascoigne ran alongside, persuading Elizabeth with stamina if not with wit. She stopped to let him finish, and as he reached his conclusion, Gascoigne cracked his oak staff in two with a flourish. Half the rod flew into the air and nearly hit the Queen’s horse, which startled violently. “No hurt!” the Queen cried, probably saving Gascoigne’s life, though his hopes for court were ruined.

Gascoigne not only saw the transition between different periods of English verse, but between changing conceptions of war and military service. Like Miguel de Cervantes, Gascoigne saw the feudal ethos of aristocratic military service being replaced by a newly professional and strikingly mercenary understanding of soldierly life. “The Fruits of Warre” embodies this transition, disdaining chivalric conceits in favor of a morally complex, contradictory account of suffering, treachery, greed, physical courage, bad leadership, stupidity, miserliness, shitty weather, worse luck, slander, mistaken fame, lies, betrayal, hunger, fatigue, imprisonment, and death, drawn from Gascoigne’s two years fighting the Spanish as a soldier of fortune in the Dutch lowlands. Not as racy as Gascoigne’s novella The Adventures of F.J., as gory as Shakespeare’s Coriolanus, or as epic as Marlowe’s Tamburlaine, “The Fruits of Warre” is nevertheless vintage Elizabethan war porn. 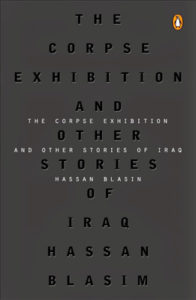 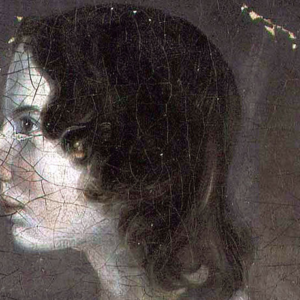 Before he was “a big glooby blob of sad blufush,” Jack Kerouac was the best-looking male writer: Geoff Dyer on a photograph...
© LitHub
Back to top
Loading Comments...