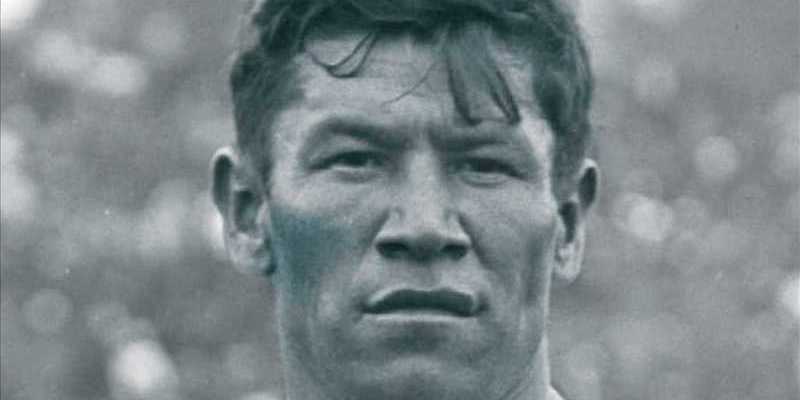 “The author achieves a sustained, operatic balance of comedy, grief and despair that is worth the wait.”

“In his exhaustively researched new biography of Thorpe, David Maraniss calmly lets witnesses like [Abel] Kiviat express the eternal astonishment about how well Thorpe did seemingly everything, and how beautifully he did it. A 22-year-old football opponent from the Army team named Dwight Eisenhower confirming Kiviat: ‘He could do everything anybody else could do and do it better’ … But Maraniss’s choice of book title is itself an indication that his story of Thorpe’s life is as much about sadness and exploitation as it is about athletic perfection. Of what are at least four translations of Thorpe’s Sac and Fox name, Maraniss chose ‘Path Lit by Lightning’ rather than the more familiarly used ‘Bright Path.’ Lightning is not merely a metaphor for athletic speed or power. When it illuminates it may do so for only a moment before plunging everything back into darkness. And it can also kill … in the same calendar year that Thorpe’s gridiron success was laying the ground for professional football in this country and his pentathlon gold medal was earned with a score three times better than the runner-up’s, he was not permitted to become a citizen of the United States … But Maraniss’s greatest contribution to the factual record of a transcendent athlete is his account of the years after Thorpe’s glory. From 1923 almost to his death 30 years later…Jim Thorpe was—in Maraniss’s gut-wrenching phrase—’the athletic migrant worker.’”

“Some premises prove so irresistible that they become crutches, excusing a colorless execution. That’s not the case here, although Yagi’s gambit is seductive enough to prop up a more ordinary book … Moments imply a novel that is primarily interested in political commentary … Yagi doesn’t simply explore how ‘pregnancy’ affects Shibata, socially and psychologically. Her designs are both deeper and weirder; she wants to press on broad assumptions about life, vitality, and spirit, and where these qualities can be found … Yagi increasingly blurs the lines between fertility and barrenness, the animate and the inanimate. She sometimes accomplishes this via magic realism … Behind this lovely (and funny!) mysticism stands a sarcastic, and probably correct, wager—that readers might not be able to grok the value of a woman’s soul without a fetus to incarnate it. Diary of a Void advances one of the most passionate cases I’ve ever read for female interiority, for women’s creative pulse and rich inner life. But even that description fails to capture what Yagi is after: those parts of us, precious and possibly hostile, which flower in darkness, disintegrate when described, and can be compared only to alien life-forms.”

“It’s a timely setup in this age of disasters beyond parody, and Levin homes in hilariously on the lame official response … one of those sweeping, polyphonic, absurdist epic novels like they used to make, though to me Levin most closely resembles his fellow Chicagoan Stanley Elkin. Like Elkin, he has a boisterous yet mournful sensibility, nihilism backed with vaudeville shtick; like Elkin, he has a gift for the riff and the digression, the labyrinthine shaggy-dog joke that roves and ranges until you’ve almost forgotten the setup … Unlike Elkin, Levin doesn’t always know when enough is enough. There is a strong Infinite Jest energy here, which, while often brilliant, can verge on a ‘Quentin Tarantino and Paul Thomas Anderson doing cocaine together’ sort of vibe … There’s no doubt that Levin’s a gifted wit and a master of repartee, but even with the finest comedians, at a certain point the orchestra starts playing and someone backstage is looking for the curtain hook … Despite its occasionally exasperating self-indulgence, Mount Chicago has passages of real charm and brilliance … In the closing sections, when Apter and Gladman finally meet, the author achieves a sustained, operatic balance of comedy, grief and despair that is worth the wait. It’s a genuinely breathtaking achievement and brought tears to my eyes. Those last hundred pages showed me the kind of novel this talented author is truly capable of.”

“With the immediacy (if not the intimacy) of Patti Smith’s Just Kids, he transports us back to the City of Light just after World War I, reeling from the butchery of millions of young soldiers … At the dawn of the Jazz Age, it seemed everyone wanted to kick up their heels, drink champagne and sleep around…Mr. Braude lavishly evokes this milieu, mining Kiki and Man Ray’s memoirs and correspondence, and supplementing them with accounts from friends, colleagues and patrons…Kiki Man Ray features cameos a-plenty: Duchamp, Picabia, Peggy Guggenheim, Picasso, Erik Satie, Hemingway…In the background looms the commodification of the avant-garde, ushered in by the Age of the Machine; no sooner had Dadaism reached its zenith then it gave way to Surrealism, as wealthy collectors (many of them American) scrambled for the next Big Thing…Kiki was foremost a catalyst, the right person at the right place at the right time, a fulcrum for Man Ray and others, her influence shaping the oeuvres of writers, filmmakers and singers … She played a poor hand brilliantly, shuffling identities as a declaration of selfhood, insisting on a cabaret of one’s own … She bridges the divide between the 19th-century model—think Victorine Meurent, Manet’s muse and herself an accomplished painter—and the autonomous, libertine women of her own era, such as Josephine Baker and Louise Brooks, and those that came after World War II … Kiki Man Ray rescues its protagonist from the dustbin of history and advocates eloquently for the vitality and importance of the world she helped to forge.” 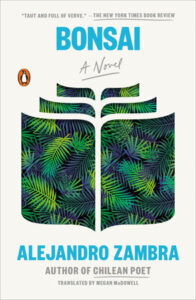 “There is something inherently poignant in the idea of a first, doomed love that can never be recaptured. Sentimentality often makes for compelling if empty reading because, when wielded irresponsibly, it can cheapen a story to the point of imitation. However, Zambra turns sentiment and nostalgia into occasions for humor, vulnerability and truth by deploying a frank specificity. There are no canned phrases in Zambra … The novella’s strange, shifting structure lends Bonsai a playful quality. The whole story feels ruled by a dream logic, filled with coincidences and ghostly echoes … There’s a way that such coincidences might make a story feel silly or clumsy, as though they were lesions on reality or cheap effects. But I did not find that to be the case in Bonsai. Part of this is because of Zambra’s mastery of tone and timing, but more than anything, it’s because of the offhand yet casual way Zambra presents these coincidences—there’s a little surprise, but nothing too fussy, nothing made too much of. There’s a dreamy associative quality of the novella that made it feel true and beautiful and moving. I left Bonsai feeling a little melancholic ache in my ribs, as though some crucial part of me had been taken away.” 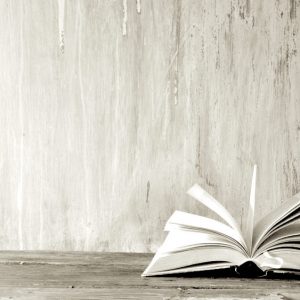 I watch from my end of the video chat as Adam’s lanky frame once again escapes the purview of my Zoom screen. He is answering...
© LitHub
Back to top
Loading Comments...