4 Reasons a Writer Should Move to Pittsburgh

Everyone should write a poem about a steel mill.

Local poet Michael Wurster made this claim at the very first poetry reading I ever attended, and it has stuck with me all these years. As a callow teenager with poetry-writing aspirations it struck me as downright crazy that anyone would consider Pittsburgh his muse. I longed to be a writer from Pittsburgh, not a writer in Pittsburgh.

Now over 30 years later I can see where Wurster was coming from.

The collapse of the steel industry was a traumatic event for the city and its effect on its daily life pervasive. In 1950, the city’s population was 676,806 people. According to the most recent United States census estimates, we’re at 301,048.

Pittsburgh continues to suffer from very real and serious problems—systemic racism, rampant gentrification in the east end, faltering infrastructure, and poor air quality. The energy and camaraderie in our literary community offers a new and hopeful vision of the city.

Starting in the early 2000s, there was an influx of new and diverse literary presences: The Sun Crumbs poetry slams at the Shadow Lounge, American Shorts, and the Gist Street Reading Series were vibrant and raucous; publications like YAWP, Weave Magazine, and The New Yinzer acted as platforms for young voices; publishers such as Speed & Briscoe, Six Gallery Press, and Caketrain came along to challenge the orthodoxy of the local university presses.

It took me longer than I care to admit, to understand that Wurster wasn’t simply making a pithy, off-the-cuff comment at that poetry reading so many years ago, but rather was issuing a challenge to the writers in that audience

. Writing a poem about a steel mill is to engage, meaningfully, in dialogue with the city. To join that conversation, means to merge one’s voice with those of John Edgar Wideman, Jack Gilbert, Willa Cather, Gertrude Stein, Michael Chabon, Larry Levis, Etheridge Knight, Annie Dillard, Terrance Hayes, Mary Roberts Rinehart, Gerald Stern and so many others.

I.
According to August Wilson, It’s All About the Neighborhoods

The historian Franklin Toker writes in his 2009 study Pittsburgh: A New Portrait, “The secret to Pittsburgh’s strength lies in its neighborhoods. Every city has neighborhoods, but those in Pittsburgh strike visitors as particularly well defined . . . The neighborhoods kept Pittsburgh afloat through the collapse of the steel industry and the decades of economic uncertainty that followed, and it is their continuing strength that makes Pittsburgh unsinkable.”

Every summer in the dingy back room of a college bar in Oakland, Jimmy gathered some of the finest writers in the city.

If you‘re seeking confirmation that Pittsburgh’s idiosyncratic patchwork of neighborhoods, from the neon-loud, bar-laden main drag of the Southside to the bucolic row house charm of the Northside’s Mexican War Streets, is the pumping heart of our writing look no further than multiple Pulitzer Prize-winning playwright August Wilson’s Century Cycle, ten plays chronicling the African-American experience in the 20th century. All but one of these plays is set in Wilson’s neighborhood of the Hill District.

Need a little more inspiration? Attend a performance of Wilson’s plays in the backyard of his restored childhood home at 1727 Bedford Avenue.

II.
A Cop and a Stick-Up Artist Walk into a Bar

This year witnessed the passing of two remarkable men who each played a crucial role in making Pittsburgh the city of writers that it is.

The gruff and irascible Jimmy Cvetic wore many hats in his life: Vietnam veteran, homicide detective, and boxing coach just to name a few, but for writers around here he is best remembered as the host of the longest-running reading series in the city. Every summer in the dingy back room of a college bar in Oakland, Jimmy gathered some of the finest writers in the city, as well as the occasional out-of-towner, for his Hemingway’s Summer Poetry Series. Here amid the wood paneling and sticky, balding carpet, poets give voice to the profound and profane. Jimmy may be gone but the series continues. You can listen to the last eight years of readings here.

Chuck Kinder’s path to becoming a novelist took some crazy turns, including pulling a few armed robberies—four cabs and three bars by his count. His novel The Honeymooners famously spins tales of his off-color adventures with pal Raymond Carver. Yep, that Raymond Carver. Chuck taught writing at the University of Pittsburgh from 1980-2014, but what he really did was give young writers the opportunity and encouragement to find their own stories. He opened up his house as a never-ending salon where students could mix with visiting writers. It’s easy to see why his former student, Michael Chabon modeled the character of Grady Tripp in his novel

Cvetic and Kinder instilled a sense of community into the writing scene. These were funny, weird, passionate guys who loved writing and were neither precious nor pretentious about it. That sensibility continues to color the writing community here. There are no secret handshakes. It is supportive and open and welcoming of

Littsburgh is an online hub dedicated to documenting Pittsburgh’s ever-expanding literary community. The site was launched in 2015 by three publishing professionals, Rachel Ekstrom Courage, Nick Courage, and Katie Kurtzman, who had all moved to town within a year of each other from New York. Littsburgh is a one-stop shop for the latest news and events in literary Pittsburgh. Publishing news, book excerpts, interviews and much more are updated daily.

Perhaps the most recognizable literary landmark in Pittsburgh is the Cloud Factory.

Just a casual glance at the site reveals the wealth of literary events happening: Nearly every night there are readings, open mics, and discussions hosted by ongoing series such as The Bridge Series, Staghorn, Laser Cat, Nasty Slam, Hell’s Lid, Madwomen of the Attic. As far as local publishers go, there are plenty, including Creative Nonfiction, After Happy Hour Review, Fourth River, Lilliput Review, Hyacinth Girl Press, Hot Metal Bridge, Pretty Owl Poetry, and the list goes on.

IV.
The Cloud Factory Is Real

The plant appears as the Cloud Factory in Michael Chabon’s debut novel The Mysteries of Pittsburgh in which the character Arthur Lecomte schools the narrator on local landmarks, ”Yes, the Cloud Factory. Haven’t you ever noticed it? When you walk across the Schenley Park bridge, there, from the park into Oakland, you pass above the Cloud Factory. What does it do we used to wonder. Why do these great clouds, perfectly white and clean, white as new baseballs, come out of that building by the tracks? Cleveland and I would be all stoned and out of school and we’d loosen our neckties, and there would be the Cloud Factory, turning out a fresh batch of these virgin clouds.”

I’d seen the building a million times, I realized, and it was indeed a cloud factory, nothing else.

Chabon takes a remnant from the city’s industrial past and by way of verbal alchemy makes of it a sublime piece of art.

“House Poem” does something similar, written by the exiled Chinese writer Huang Xiang at City of Asylum, in which a residence on the Northside is quite literally turned into a poem. You can listen to a reading of the house here.

This is the mission passed on to our writers, the demand the city makes of each of us—imagine a new Pittsburgh.

Kristofer Collins is the books editor for Pittsburgh Magazine and a frequent reviewer for the Pittsburgh Post-Gazette. He is the author of several poetry collections. He lives in Pittsburgh, PA with his wife and son.

On the Humorous Surrealism
of Mimi Parent 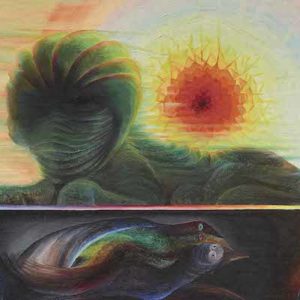 On the Humorous Surrealism
of Mimi Parent

Why are summer mornings so crystal clear? Sparkling, bright, still: Is it a quality of the air or of the light? Or of the mind...
© LitHub
Back to top