14 Books to Read this August 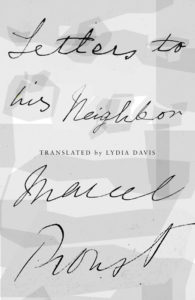 It’s August in the countryside where I live and work. I hear, from pre-sunrise through post-cocktail hour, the numbing whine of weed whackers and growls of oversized and lumbering lawn mowers chewing up grass on my neighbors’ lawns. In winter, sounds are tempered by closed windows, but they remain: snowplows and snowblowers battering the season with their black noise. Marcel Proust’s Letters to His Neighbor is the balm necessary for everyone who works at home. In his genteel and serpentine prose, Proust writes letters to his new neighbors who set up a dental practice two floors above his Paris apartment, their clatter anesthetizing to his sensitive and tormented ears. Proust’s well-bred hostility is music to my ears. 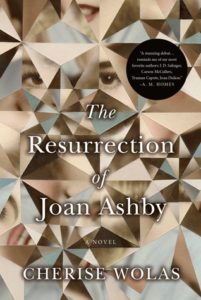 Sometimes a book you’re most excited about is because you’re most excited about hearing and reading other people’s reactions to said book. Such is the case for me with The Resurrection of Joan Ashby by Cherise Wolas, a book about a novelist whose youthful success is nearly obliterated by her reluctant decision to bear children once she’s married. I emphasize “her reluctant decision” because Joan Ashby’s surgeon husband may have been deceitful about his thoughts on children, but it is crucial to this novel’s plot that Ashby herself agrees to procreation. She is not a woman who has chosen to remain childfree, nor is she a woman who was raped or coerced into pregnancy. Without Joan Ashby’s free will, her future ambivalence towards her children and herself has no meaning.

Resurrection is a big, complicated book that wrestles with parenthood and the artist’s life from a female perspective, in ways no writer has attempted since Woolf. You may love it entirely, dislike parts of it, argue strenuously with some of the choices Wolas makes in her narrative, but you will not come away unchanged, and you will continue to think about Joan Ashby’s path long after you put this brick down. It releases on August 29th and that’s a good thing, as you can plan to spend Labor Day weekend immersed in a masterful (mistress-ful? We need a better modifier. . .) debut novel that dares to consider whether becoming a mother is worth it, or not. 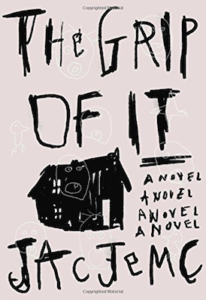 Jac Jemc, The Grip of It
(FSG Originals)

Some writing touches on questions of the ambiguous and the ephemeral; Jac Jemc’s fiction embraces it wholeheartedly. Her work to date has abounded with mysterious disappearances and questions of our fundamental unknowability—so the fact that her new novel The Grip of It is a kind of a ghost story comes as little surprise. It’s also magnificently unsettling, a tale of haunted places like no other. 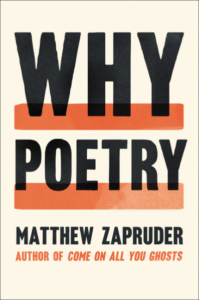 Poet and editor Matthew Zapruder’s Why Poetry is a welcome argument against the utilitarian view of reading, instilled in many of us as high school students, that often overshadows the pleasures of poetry. By subverting the view that understanding is the ne plus ultra of reading poetry, Zapruder opens the door to mystery, revels in the strangeness of language, and finds solace in the unknown, lessons that apply, of course, to so much more than lines on a page. 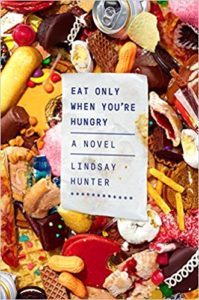 The long tradition of road-trip fiction usually features a protagonist setting out to find his or herself. In Lindsay Hunter’s heartfelt Eat Only When You’re Hungry, middle-aged Greg Reinart is trying to find someone else—his drug-addicted son who’s been missing for weeks. Greg, however, isn’t doing too well himself: he struggles with food and his weight and the reproachful voice of his mother, who he hears critiquing him endlessly in his head. In many ways, Greg understands his son’s desire to disappear. But he seeks to find him nonetheless, traveling from West Virginia to his ex-wife’s home in Florida. Darkly moving and brimming with psychological insight, Hunter’s novel is a poignant meditation on what it means to grow old and learn to forgive others—as well as yourself. 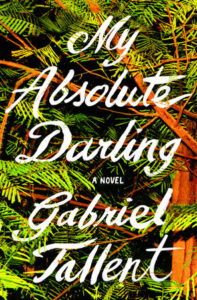 Easily one of my favorite debut novels of the past decade, My Absolute Darling is not for the faint of heart. Turtle, the fourteen-year-old protagonist, is abused by her monstrous father. She’s an outsider and a fighter who must find her own way in the world, despite how lonely she feels. Her greatest strength, she learns the hard way, is found within herself. “Nothing is as difficult as a sustained and unremitting contact with your own mind,” Tallent writes. “She thinks, does it matter if it is difficult? It doesn’t matter. It is still better.” 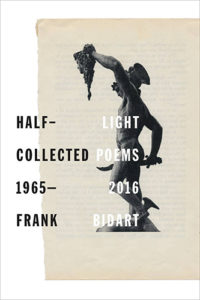 Frank Bidart’s Collected Poems is a true monument—not only the sum of 50 years as one of America’s leading poets, but also the release of a new collection (an event in itself) titled Thirst. Bidart is likely best known for the characters he puts into his poems, among them the amputee Ellen West, or the child-murderer Herbert White, and the Collected is an opportunity to view these monologues all in conversation. It is also a chance to take stock of his innovations in poetic form—how they have developed throughout his career and how they have influenced the literary world. This is a big, big book—well over 700 pages—one to take one’s time with and to savor. 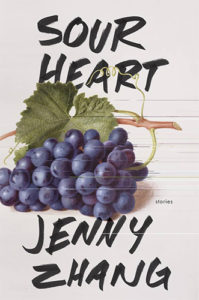 Who isn’t anticipating this book? Jenny Zhang is one of the most exciting and thoroughly original new voices in American fiction, and Sour Heart is worth every bit of hype. This collection explores the world of Chinese American immigrant communities in New York through the eyes of young girls. Its stories span generations and continents and are hilarious and devastating, tender, and mischievous. Zhang’s beautiful, direct and sometimes scatological poetry (and her bang-on essays) had already won many of us over, but this book—the first published by Lena Dunham and Jenni Konner’s Lenny imprint at Random House—will catapult her to another league. 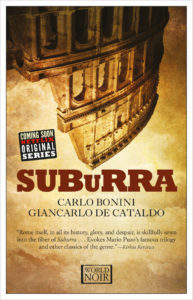 Based on a real-life scandal, Suburra is set in the closing days of Burlusconi’s feckless reign, as a coterie of mafia outfits and corrupt politicians try to make Ostia, the ancient port of Rome, into a Macau-style gambling haven. The cosmology of Italy’s underworld is sordid, byzantine, and endlessly fascinating; here it’s brought to you by the joint efforts of a prominent crime novelist and a reporter from Italy’s left-leaning daily paper, La Repubblica. For added incentive, Suburrra is being developed as a Netflix original series by Cattleya, the production company that adapted Gomorrah from the 2006 Roberto Saviano bestseller. 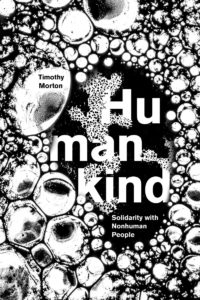 It’s August and all the “fake news” is making me lazy, so I decided to brush away some brain-rust and engage in reading some hardcore critical theory. What I have learned so far is that Timothy Morton is a very smart person who seems to have a joy buzzer imbedded in his brain: he is that clever and funny. This book is meant to convince us of the solidarity between humankind and other lifeforms, or as Morton writes, “I chose the title Humankind as a deliberate provocation to those scholars who think that ‘having in common’ is based on ideas that are less acceptable then farting in church.” His definition of the paranormal, partially excerpted here, is one of the most beautiful ideas I have read : ” life as a subset of a vaster quivering.” Science speak and poetry paired together. I will need to brush up on Marxist theory if I want to fully comprehend this book, though there are enough fully-defined-concept sentences to make this book accessible to most of us. As Neil Young proposes: rust never sleeps . . . so I believe I will get there. 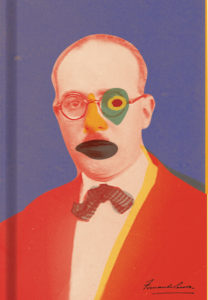 Fernando Pessoa’s masterwork, The Book of Disquiet, is a fragmentary novel of existential ruminations, exploring the drab life of assistant bookkeeper Bernardo Soares. First published in Portuguese in the 1980s—almost half a century after Pessoa’s death, but written over the last decades of his life—The Book of Disquiet, in a way, can be situated both before and after the wave of fragmentary novels of the 1970s. Like Renata Adler, Pessoa has a mastery of epigrammatical cadences, somehow hinting at enormous depth with a mysterious brevity. Like Max Frisch, the personal tragedies are laced with black humor. Pessoa gives lyrical voice to the dull days of a working man, bridging the vast chasm between the poetry of the inner life and the minutiae of daily existence. 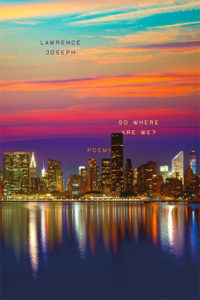 Lawrence Joseph, So Where Are We?
(Farrar, Straus and Giroux)

For the past few years, like most of us, I’ve felt like the world is changing more rapidly than I can absorb the violence being done to it—not to mention the fabric of reality. This is happening so fast it’s easy to forget those two things are not the same thing. Into this breach steps Lawrence Joseph’s sixth collection So Where Are We? Here is a 21st century Virgil, a guide to the wreckage we’ve made of enlightenment. Across 20 or so beautiful poems, he tries to live and to love and to know where he is while wrestling to the ground all the new languages of violence. Syria, bank bailouts, Eric Garner. The violence of capital, the violence of aerial bombing, the violence of unchecked law enforcement. An Arab-American from the great labor city of Detroit, with its anguished history of racialized violence, one might say Joseph was made for this moment. What beauty and horror he wrenches from the degraded syntax of modern life. Intimate, brave, outraged, hopeful; I’ve not read a book more of and for our times than this collection. 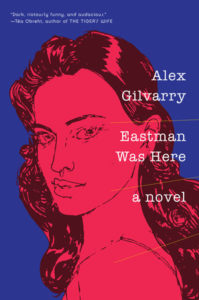 Alex Gilvarry’s Eastman Was Here is a brilliant comic period piece that relentlessly and uproariously skewers the bombast and arrogance of its Norman Mailer-esque protagonist without ever slipping into full blown parody. The year is 1973 and, as part of a last-ditch scheme to win back his both his wife and his literary reputation, bridge-burner extraordinaire Alan Eastman accepts an assignment to cover the final days of the Vietnam War. Being privy to the thought-cocktail of paranoia, regret, depression, and lust that powers Eastman’s doomed quest is an absolute delight. That we feel for this bloated, womanizing dinosaur—despite all he has done to merit his comeuppance—is a testament to Gilvarry’s skill as a novelist. 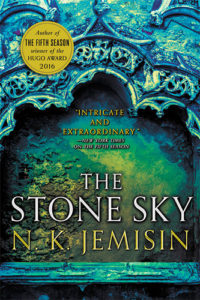 N.K. Jemisin’s Broken Earth trilogy is the best new speculative fiction I’ve read in a long time. The first two volumes introduce an intricate, captivating world: a future where humans are at war with the earth, and in particular with its wild climate swings. Some of these people are called orogenes, those who can control the earth’s energy, for better or for worse—depending, often, on whom you ask. Some of the people involved are not humans at all. Things get weird. The Stone Sky, out this month, completes the set. The moon is coming closer. I can’t wait to see what happens.

Never Meet Your (Anti-)Heroes: My Correspondence with Bill Knott 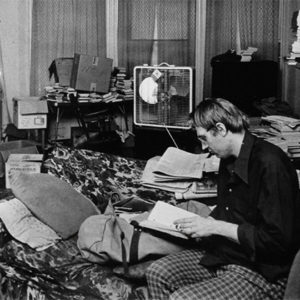 Never Meet Your (Anti-)Heroes: My Correspondence with Bill Knott

“ . . . attempts to resurrect poets unread in their lifetimes are futile, no matter how much money university presses waste...
© LitHub
Back to top
Loading Comments...