Music and literature have long been intertwined. They are also two things that snooty teenagers judge one another by. Sometimes snooty adults, too. So for the best of both worlds, why not try some great music about books? (Great books about music are also out there, of course, but that’s a list for another time.) Now, there are hundreds of songs out there inspired by literature in one way or another, and most of them are, necessarily, not on the below list. These are merely a few of my own favorites, organized into songs about writing, reading, books, and um, one other thing. The comment section is available for further nominations.

“Imflammatory Writ,” Joanna Newsom (Not on Spotify, but find it here)

A funny, jaunty, self-effacing little number about trying to write the Great American Novel—or at least the titular inflammatory writ.

And as for my inflammatory writ?
Well I wrote it and I was not inflamed one bit
Advice from the master derailed that disaster
He said “Hand that pen over to me, poetaster!”

In this case, the novel is mostly a metaphor for her life—and a mixed metaphor at that (You think she’s an open book/ but you don’t know what page to turn to, do you?), but I’ll let that slide.

Dear Sir or Madam, will you read my book?
It took me years to write, will you take a look?
It’s based on a novel by a man named Lear,
And I need a job,
So I want to be a paperback writer,

It’s a thousand pages, give or take a few.
I’ll be writing more in a week or two.
I could make it longer if you like the style.
I can change it ’round,
And I want to be a paperback writer. . .

The Beatles have never been so cutting.

Who gives a fuck about an Oxford comma? Before we go any further: lots of people, including yours truly. But let’s just set that aside for now. In an interview on this very specific subject, Ezra Koenig told Vanity Fair: “I have a complicated relationship with grammar,” and adds that he “spent a year teaching eighth-grade English in Brooklyn and, when you spend so much time trying to get kids to write in Standard American English, you’re bound to start questioning the importance.” Perhaps getting defensive, he claims the song is about more than just that first line, and says, “I first came across the Oxford comma on Facebook. There was a group at Columbia called Students for the Preservation of the Oxford Comma. I didn’t think about it too much but, a few months later while sitting at a piano at my parents’ house, I started writing the song and the first thing that came out was Who gives a fuck about an Oxford comma?” Well.

Officially, I’m not sure I know what “books written for girls” are, but I definitely know who the kinds of guys who read them are. Don’t trust a guy with a brand new copy of Jane Eyre under his arm, is all I’m saying.

There are no words in this song beyond the title, slowly spelled out (and the aleatoric outro), which actually makes it excellent background music for reading.

Songs Inspired by the Classics:

Probably my favorite literary song, but that’s mostly because it’s one of my rabbit-hole songs, and not just on account of the lyrics. What I mean is: I listen it once and then I have to listen to it obsessively for many days before I get over it and forget about it until I accidentally listen to it again and get sucked back into Wonderland. “It’s about following your curiosity,” Grace Slick said in an interview. “The White Rabbit is your curiosity. Alice follows him wherever he goes. He leads her to drugs, though, and that’s why the song was written. Hey, all major children’s books do this. In Peter Pan, sparkle dust lets you fly. In the Wizard of Oz, they awaken in a poppy field to see the beautiful Emerald City. Our parents read us stories about chemicals that make it possible to have a good time.”

And if you go chasing rabbits, and you know you’re going to fall
Tell ’em a hookah-smoking caterpillar has given you the call

“In the Aeroplane Over the Sea,” Neutral Milk Hotel

Not just the title track but the entire album is inspired by The Diary of Anne Frank. In a interview in a 1998 issue of Puncture Magazine, Jeff Mangum admitted the following:

Right before recording On Avery Island I was walking around in Ruston waiting to go to Denver to record. I don’t consider myself to be a very educated person, ’cause I’ve spent a lot of my life in dreams. And I was walking around wondering, would everything make sense to me if I knew the history of the world, or would I just lose my mind? I came to the conclusion I’d probably just lose my mind. Next day I walked into a bookstore, and there was The Diary of Anne Frank. I’d never given it any thought before. Then I spent two days reading it and completely flipped out . . . spent about three days crying . . . It stuck with me for a long, long time. I’m not sure I could allow myself to connect with a book that much. While I was reading the book, she was completely alive to me. I pretty much knew what was going to happen. But that’s the thing: you love people because you know their story. You have sympathy for people even when they do stupid things because you know where they’re coming from, you understand where they’re at in their head. So here I am as deep as you can go in someone’s head, in some ways deeper than you can go with someone you know in the flesh. And then at the end, she gets disposed of like a piece of trash. I would go to bed every night and have dreams about having a time machine, having the ability to move through time and space freely, and save Anne Frank. Do you think that’s embarrassing?

Didn’t know “Whip It” was a literary tune? According to Devo’s Jerry Casale, it was inspired by Thomas Pynchon. In an interview, he said:

“Whip It,” like many Devo songs, had a long gestation, a long process. The lyrics were written by me as an imitation of Thomas Pynchon’s parodies in his book Gravity’s Rainbow. He had parodied limericks and poems of kind of all-American, obsessive, cult of personality ideas like Horatio Alger and “You’re #1, there’s nobody else like you” kind of poems that were very funny and very clever. So I thought, I’d like to do one like Thomas Pinchon, so I wrote down “Whip It” one night.”

“Thieves in the Night,” Black Star

This song was inspired by Toni Morrison’s The Bluest Eye, which, like this song, is in large part about being a black person living in a world that values whiteness (and blueness of eyes), and the paradox of coming to value that yourself. Not only does Talib Kweli use the phrase “bluest eye” in the first few lines, but the song’s hook goes like this:

Compare to this passage from Morrison’s debut:

And fantasy it was, for we were not strong, only aggressive; we were not free, merely licensed; we were not compassionate, we were polite; not good but well-behaved. We courted death in order to call ourselves brave, and hid like thieves from life.

According to Wikipedia, in the album’s liner notes, Kweli writes that this passage “struck me as one of the truest critiques of our society, and I read that in high school when I was 15 years old. I think it is especially true in the world of hip hop, because we get blinded by these illusions.”

Songs About Having Sex in the Library (Bonus Track):

“Young Adult Friction,” The Pains of Being Pure at Heart

Oh yes. This is the kind of thing all teenage bookworms secretly dream about—and some college kids, although definitely not any I knew, actually act on:

Between the stacks in the library
Not like anyone stopped to see
We came, they went, our bodies spent
Among the dust and the microfiche 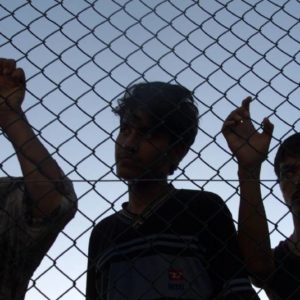 “The man who looks for security, even in the mind, is like a man who would chop off his limbs in order to have artificial...
© LitHub
Back to top