10 Things You Should Know About Lists on the Internet

Last week on the internet, people were… upset over this GQ listicle, in which the editors asked a handful of well-regarded contemporary authors to pick a book “you don’t have to read” and suggest another, better one in its place. The pearl-clutching is not all that surprising, but I did find it a little bit confusing, in part because we’ve been here so many times before. What is there, at this late date, to get so incensed about?

1.
The canon is not in danger.

Sometimes people complain that lists like this are Bad because they put classics in danger of being swept under the rug, or because they seem to suggest that only new books are good, and older books are lame. I got this complaint when I published this list: 10 Books to Read by Living Women (Instead of These 10 by Dead Men). But it’s not that old is bad and new is good. Lots of old books are good, and lots of new books are bad, and vice versa. Often, however, new books are simply more fun to write about than old classics, because everyone’s eyes glaze over when you recommend Ulysses again. Like, everybody knows they should read Ulysses! And of course it’s not wrong to be a dead white man, and it doesn’t make your book suck—it’s just that the canon is full of dead white men, and they don’t really need the airtime. Again, we know we should read Ulysses. (And yes, sometimes things do become outdated while we lazily continue to talk about them as if they were the be all/end all. Correcting that isn’t a bad thing.)

But all of that doesn’t really matter, because The Catcher in the Rye is not in trouble. No listicle can destroy The Catcher in the Rye. (And even if it could—even if the culture moved on from a novel  . . . so what? It’s happened before, and it will happen again, my friends.) No listicle is going to ruin the canon, or book culture, or, you know, “books.” I don’t think a single listicle can even be bad for the canon, or for book culture, or for books—although the tendency to be too precious about literature might actually have an adverse effect.

2.
Listicles are meant as a service.

Listicles are like the weather: they will happen no matter what. They will be good or bad; people will disagree about whether they are good or bad. They may irritate you for an afternoon or even a day, but soon they will be gone, or different, and you will forget they even happened.

But they will keep appearing, because the truth is, everybody loves a list. Don’t deny it. They’re comforting; they’re comprehensible. They create order. There are a number of psychological reasons for our undying love of the list, but one of the most convincing is that our brains experience lists like a game: we see the headline, and we guess (consciously or subconsciously) what might be on it. We click on the list to find out if we were right. When we are, we feel satisfied. We feel smart. We even feel connected. Maybe we learn something new in the process. These are all good things.

At their core, literary listicles are not disparaging but rather generous: they are, after all, recommendations of good books to read. Perhaps they will even introduce a reader to a book she will like. Sometimes, in the literary world, it’s easy to forget that most people don’t read all the time, or write or talk about books for a living, so they likely haven’t heard about as many books as you have. To that end, it’s actually pretty great to see a big general-interest magazine like GQ recommending interesting literature that deviates from the mainstream, high-school required reading list.

Generally, listicles are written by a single person based on their expertise and/or research. There’s no panel of experts. There’s no strenuous vetting process. It’s just one writer, recommending some books. Sometimes, as in the GQ list, several people will be surveyed. That means that each book is being recommended by a different person—the person whose name appears at the bottom of the blurb!

That is to say: it is not an authoritarian dictation; it is all a matter of taste. I love The Secret History, and would recommend it to anyone. You might even say I think everyone should read it. But I know at least two smart people who don’t particularly like The Secret History. They think everyone can skip it. André Aciman doesn’t like The Catcher in the Rye. Hey, guess what—I don’t either. If you do, that’s fine! You are allowed! Either way, there’s a good argument for picking up Aciman’s recommendation and reading that one too. That, as stipulated above, is the whole point of a list like this.

And yes, it’s true that Jesse Ball’s description of the Bible is aggressive—but again, that’s his opinion about a book (a book that is absolutely not in danger of being driven out of print by one or a hundred listicles), and he is entitled to it. The fact that some people think a short statement about why a writer prefers one book to another is “embarrassingly philistine drivel” is . . . pretty embarrassing!

4.
Lists are not personal attacks against you.

A reminder: if you like a book, and someone else does not, and someone puts it on a list of books they do not like, they are not attacking you. They don’t even know you. The fact that you like a book that someone else does not like does not mean they also do not like you, or that you are in some way lacking. Books written by other people have nothing to do with you. Liking them does not give you ownership over them, nor a moral connection to their well-being. Stop it.

A related reminder: not everything on the internet is for you. Or for me. Or for any one person. And that is okay. It has to be; there’s no other way.

The list you’re looking at? The author missed some books that could have fit. Guess what? She knows. I promise you, she knows. Every book cannot be on every list. If you feel the urge to comment on a listicle (or god forbid, email the author) with something like “I CAN’T BELIEVE YOU MISSED/FORGOT/HATE BOOK X,” or “I can’t respect/won’t read/don’t trust a list that doesn’t include book y,” try instead saying “Hi! Loved this list. I’d add books x, y, and z. Have you read them?” Why have an angry response instead of a creative (or hey, even constructive) one? (By the way, I have gotten the latter type of message, just not nearly as often as the former.)

6.
There’s a fairly wide gap between “you don’t have to read this” and “BURN EVERY COPY!”

“GQ took 21 books they think should be digitally burned, okay, which doesn’t sound like a very hip thing,” is how Fox News religion contributor Father Jonathan Morris characterized the GQ list on television recently. He sounds like he’s got the 411. But um, guess what? Saying “instead of reading book x, read book y” is actually not the same as saying that book x should be excised from the canon, or never read again, or “tossed on the trash heap,” or burned, digitally (whatever that means) or otherwise. It just means that one person prefers one book to another. That’s it.

GQ is actually not saying that the Bible is the “12th most overrated book of all time.” It’s just #12 on a list of 21. On an unranked list, that is utterly meaningless. On a ranked list, it is probably close to meaningless too. Just FYI.

8.
You don’t actually have to read (or not read) anything…

. . . no matter what what the headline says. 21 Books You Don’t Have to Read? There are millions of books you don’t have to read, because you don’t have to read anything, and you get to make your own choices about what you consume or do not consume. Reading lists are not oppressive. Reading lists are not coercive. You get to ignore whatever you want, and you get to read whatever you want to. An article on the internet has no real power over you unless you hand that power over.

Again: don’t forget the actual purpose of reading lists on the internet: to introduce readers to new books. (And yes, they do generally always get a lot of readers.) The point of the GQ list is not actually to convince readers not to read classics—it’s to suggest books that they might even like better. It is to encourage people to read books. Just maybe different books than the ones they’ve already read in high school!

If you’re upset about the GQ list, or really about any list, answer this question honestly: do you really think that everyone has to read any book—on this list or otherwise? Even (particularly) the Bible? If not, then why are you upset that someone has admitted that they don’t like a certain book, and recommended some other book?

9.
That said, do read the text of the thing you’re about to get up in arms about.

Look at the very first entry on the GQ list, in which Lauren Groff begins, “I actually love Lonesome Dove, but I’m convinced that the cowboy mythos, with its rigid masculine emotional landscape, glorification of guns and destruction, and misogynistic gender roles, is a major factor in the degradation of America.” She recommends Jean Stafford’s The Mountain Lion as a foil to that cowboy mythos. Tom Perrotta writes, “I’m a great admirer of Cormac McCarthy’s sparer masterpieces, but I’m ambivalent about Blood Meridian, the historical epic often cited as his greatest work.” Who could be offended by such a measured response? Who could fail to understand each of these entries as opinions and recommendations from their respective authors? Well, someone who didn’t actually read it.

Same goes with introductions. I have written a thousand introductions in which I explain that I used such-and-such constraint or excluded books like x and y, only to find the comments section and my inbox filled with messages asking me how I can call myself a reader/writer/morally acceptable person when I didn’t even think to include book x and book y? Read the intro. Read the books you don’t have to read. Read the books recommended to you by people you trust. Don’t get offended by someone not liking a literary classic. The canon is a construction just like everything else.

Why are you angry at the internet?

Do We Even Need Men? 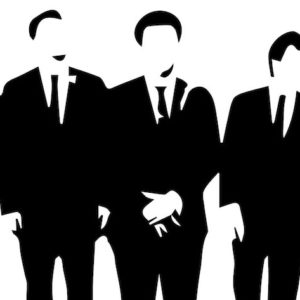 Do We Even Need Men?

Why do males exist? If you learned biology at school, your teachers will probably have told you it was because combining...
© LitHub
Back to top