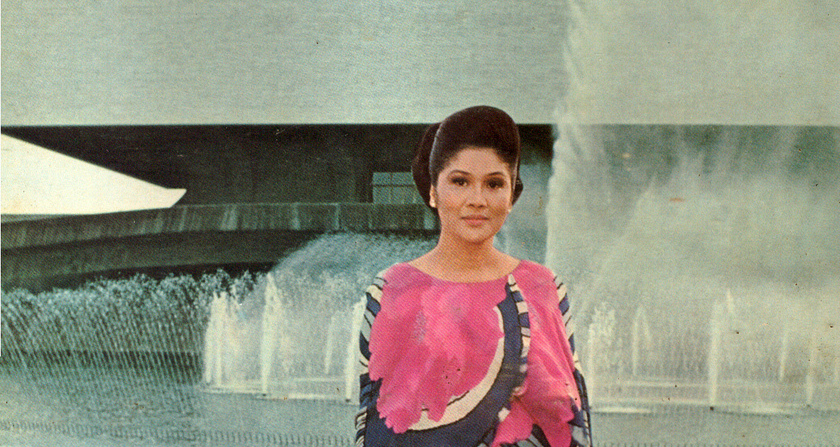 The Soft Power of Banal Nationalism: Blueprint for Fascist Creep

(If you can’t always say things straight, you have to do it sideways.)

History is an apparition, speaking it can be an exorcism. My testimony is contested only because I was born into collective delusion. If you want something enough it becomes realer than real in its absence, and then you have two: the thing that is a body and the thing that is a ghost.

Ferdinand Marcos did not seize his dictatorship by force. He was elected democratically—never mind the family cash that sustained the Nationalist Party during a bitter campaign of attrition, or the oligarchic press influence which allowed aggrandizing fictions to circulate as fact. Never mind that, when found guilty of assassinating an opponent before even setting foot in Senate, Marcos Sr. had him acquitted of all charges. Ethical doubt is no political force, and neither is premonition, especially not in the face of the populist, anti-colonial passion which bore Marcos to victory in 1965. Promises of complete political and ideological independence proved irresistible to a population battered thrice-over by de- and re-colonization. A revolution against three hundred years of Spanish rule had culminated in accession by the United States, followed by an invasion by Japanese forces during the Second World War. With his re-election in 1969, Marcos ushered in the end of democracy. As the Islamist-separatist insurgency gained momentum across the south of the majority Catholic country, and student protests riding the global wave of May 68 erupted, he found the perfect pretext to bring down the black curtain of martial law.

As Ferdinand pursued diplomacy and infrastructure, the First Lady, Imelda Marcos, reconstructed culture. The soft power of banal nationalism was not lost on her; she understood that a new national imaginary would not be built through politics alone, but relied on an environmental naturalization of the regime’s ideology. Plumbing the depths of taxpayers’ pockets and US war damage funds, her patronage was limitless. She funded the galleries and white walls by which Manila’s slums were redacted from progressive vision. The Cultural Centre of the Philippines was the pearl of all her projects—a monumental complex dedicated to art, film, music, and theatre. The regime’s prize architect, Leandro Locsin, was favored for the grace by which he could translate pre-colonial ideology into imposing, modern edifice. Alongside the Complex, he designed the National Theatre, the International Convention Centre, the National Arts Centre, and a myriad of international-style hotels, including the one I grew up in, all on the Marcos’s quenchless dime. When dozens of workers were trapped under collapsed scaffolding during the Manila Film Centre’s construction, the concrete kept pouring up to the tight deadline. Their corpses form but one indigenous element of the Cultural Centre. Coconuts, predictably, comprise nearly all of the Coconut Palace, surreally demonstrating the national fruit’s material versatility. Seashells, scavenged from the site, are crushed into the raw concrete which dresses the National Theatre’s “floating volume”: an aesthetic tactic adapted from the bahay cubo—the grass-roofed, bamboo houses raised above earth or water on stilts. The theatre’s primary spaces are cantilevered, accessible not via the stick ladder typical of bahay cubo design, but vast twin ramps worthy of a presidential entrance.

(Showing good diplomatic face, Ronald and Nancy Reagan attended the Cultural Centre’s inauguration—he in smart tux, she in white dress—and the dictator in translucent pineapple-silk, our uniform for celebration and funeral.)

Would you or would you not choose the same, under duress, and slalom on water skis with the President’s daughters through the gas shortage? You would, after all, still want what you wanted. You would still make shapely your earthly pleasures, which would complicate things, you admitted, as the hidden oil barrels were rolled out onto the docks. The First Lady visioned the white wake of the speedboat, wax green of the city gardens, gold bricks inscribed with love-letters to her dearly beloved. Never mind the drought or the barricades, the debris clouding the access roads, the near-famine and the journalists’ bodies dumped out in the street. Here was one priority: she sent teams out to spray-paint all dead vegetation a verdant green. Still, the city went greyer as the buildings she commissioned went up in record time. Red and blue plastics snagged in the cheval-de-frise.

Nothing is future-proof, least of all the aesthetic bias of a singular mind. Imelda dreamed of a Philippines made powerful by the dint of inherent strength, considering the nation a bright sister who would’ve excelled had she not been so brutalized. Driving to the complex, along the traffic-clogged avenues and the trash-filled bay that our current President promises to fill with bodies of the executed, I can see the prolonged influence of her preference. Manila’s postwar skyline is largely strafed by concrete, the uniform facades soot-streaked by air pollution, softened by laundry hung out to dry. In spite of repeated renovations, the National Film Centre still has the population spooked. Crabgrass sprouts where the concrete cracks, its faux-Parthenon façade looks dirty under the big equatorial sky, and a reverse-alchemy is engineered in decay. Our mind’s eye fills in for our bodies when we don’t dare cross the threshold. Similarly, when censoring structures hold it at bay, language conjures what it needs to. As the most stable narratives are revealed as the least trustworthy, and speaking in code proves essential to organizing resistance, unreliable narration becomes the logical format for post-authoritarian memory. The question of which story belongs to whom becomes moot, because the precedent for sharing true experience relies on disregarding the pedigree of its truth.

The First Lady had two aliases: “Steel Butterfly” to the press, and “Jane Ryan” to Credit Suisse. The latter concealed some of the $10-billion thieved from the nation as the regime killed, tortured, and disappeared an estimated 34,000 people to clinch complete political control. Transparency returns power to the citizen, pinpointing incontestable facts in order to begin bringing abuse to justice. Simultaneously, in the constantly shifting testimony of oral history, compelling images circulate regardless of truth. Rumors expose the shakiness of official narrative; should they gather enough force, they can operate as transparency does, developing motivation in concert toward political action. Gossip about one president’s “twenty-four-hour buffets in the presidential palace, quaffing cases of Chateau Petrus while brokering deals over poker games he was allowed to win” worked in tandem with, “revelations regarding his corruption and drove the people into the streets to successfully oust him from [power].” Similarly, the ghosts of the National Film Centre haunted the nation, spectral and persistent, despite official censorship. They swarmed with the spectres of extrajudicial killings, crowding the public squares of the national mind. Imelda called for an exorcism.

“You do not develop culture by putting up a 50-million peso building on the bay,” said Senator Ninoy Aquino, the regime’s most outspoken critic and Marcos’s primary opponent, not yet anticipating the state-sanctioned bullet which would later cleave the floating volume of the airfield to end his life. The energy of his death would foment the nonviolent People Power Revolution of 1986, ending the regime’s hold over the Philippine nation. However, even the role of a peaceful pro-democracy resistance fluctuates wildly in our collective imagination. A nostalgic sentiment equating dictatorial authority with national strength colored this year’s elections, bringing the pro-authoritarian Rodrigo Duterte to power amid existing allegations of corruption and murder.

Here’s one creation myth: a hostage-head swarmed with flies, orally birthing truth. Here’s another: a vinyl campaign banner donned as toga to university hazing, the ultimate hybrid of meritocratic class. Life under authoritarian rule made desire shapely; life under austerity did the opposite of constraining memory. Crossing the lobby, my brother and I made for the exit, our gait discombobulated by the unsubtle weight of cash in a shoebox in a shopping bag. With the money we had squirrelled, we built a house just south of the city. In keeping with tradition, we slaughtered a chicken and sprinkled its blood in each corner of the foundation. We dropped three coins in and then began to pour the concrete. Dewed with sweat in the morning’s sear, I watched the slow creep of its sealing. Survival is a kind of intelligence, as is coercion. Our “third space” as a “migrant’s metaphor” is not related to victimhood but manipulation.

History is cyclical; trauma is epigenetic. If a chorus of ghosts persists through generations, can a haunting make a family? “After the first hanging, there will be another ceremony for the second time until the head is completely severed from the body,” said the President, not then, but now. Packing your vaporizer with weak local weed, you paraphrased: I will parade the degenerates till you think you’re all tripping. From the compound we could hear the drums and the cheering of our procession-turned-public-shaming. Did you or did you not make us wait for the vicar who arrived in a cloud of incense, who charged for the sprinkling of holy water—non-potable, unfiltered—over your Buddhist statues and provincial silver? Did you or did you not forbid us to leave the house, cooking like a maniac even as my appetite turned in your wartime lapse: fried spam and rice, canned fruit frozen into whipping cream. I wanted the whole animal, garlanded and punished. I wanted the smell of money out, coppery like blood, the tang of bills in my mouth.

When you let me live, I also let you die, or was it the other way around? Or do I mean the explosives at the super-mall, the pigs prowling thereafter—or the fire, Daddy’s vinyl pooled in blood-black glisten—or the earthquake, Joyce reclining in the rubble still holding her book, the sky blacked out by ash which absorbed the horizon, and us, mute, standing in that atmospheric static, wondering if anything so silly existed as fate? Would you or would you not, under duress, collaborate?

Alex Quicho is a writer and cultural researcher in London. Born in Boston and raised in Manila, she writes about identity, futures, and soft power in art and design. 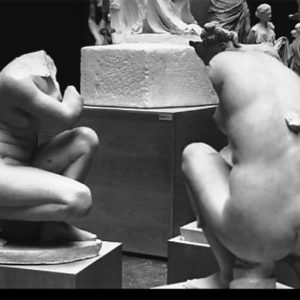 Sara Baume has won the Geoffrey Faber Prize for under-40 authors for her novel Spill Simmer Falter Wither, which, the judges...
© LitHub
Back to top